Theres always wet oil in the places shown on the photo below, and has been since I got the car 3.5 years ago, but weirdly it doesn't lose any oil. Anyone any idea where it might be coming from please? 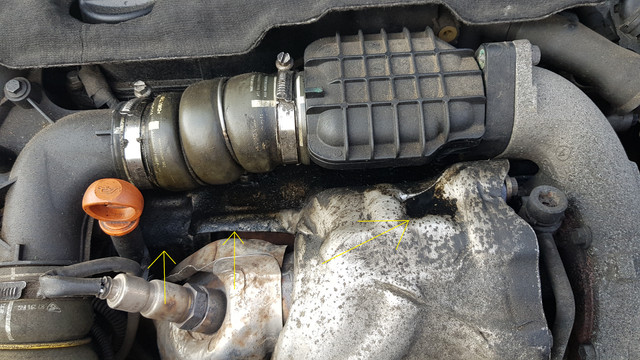 The injector wells on my C5 always had a bit of oil in, not spilled as I was very careful filling as I assumed initially that that was the cause.
It seemed to me that there might be a fine oil mist coming from the induction piping that like yours had jubilee clips on, which don't seem to form a good seal.
Never got round to doing any more that poking at it a bit.
It wasn't much, the car used no oil between changes. Cleaned it out before MOT day was the limit of my efforts to fix it.
Top

Make sure they are tightened to the correct torque - this is how the seals fail when oil leaks and gets under the seal, and then starts to lift them as it carbonises and allows more oil to get into the system. Wipe it away and see how quickly it returns. If it does, I would get the injector seals checked and then the injectors re-torqued.
Top

What year is the car? It looks like it's 1.6 but there's a difference between the earlier 16v and the later 8v engines. The 8v engines have injectors that go straight into the cylinder head and have no seals to leak oil. The 16v injectors go through the cam cover and it's these seals that can leak and can cause the terrible carbonised oil problem.

Our 8v 308 has an oil leak which I believe comes from the cam cover to cylinder head seal or possibly the cam oil seal. I'm waiting until it's time to change the timing belt as basically it's just unsightly rather than potentially engine destroying.
Top

Thanks for the replies. It's the 1.6Hdi DV6C engine.
The mist from the induction piping could be correct.
I thought I had a leaking seal on an injector a couple of months back, but the garage rang me after half an hour and said he could still replace them if I wanted but there was no sign of any leak around any of them. They are rattly as anything though so going to (eventually) get them pulled, cleaned tested and new seals on, so that should tell if it was them. Plus the oil has been there since before I got the car and they weren't rattling then, so I would think it's unlikely.
Top
Messages: 5 • Page 1 of 1