My ears did prick up when I saw that on the news and heard the phrase "hydrogen gritter trucks." Curiousity will have me looking it up, with the cost of your fuel cell vehicles being relatively enormous I wonder if its going to be a LPG type conversion for the gritters only using hydrogen, while still having their ICE.

Maybe another case like the Nottingham Taxi wireless charging pads, of money being thrown around in the wrong direction.

Dual-fuel is normally ICE, able to be flicked over to run on either gas or petrol, as required.
Opel/Vauxhall offered many of their (petrol) cars as dual-fuel ex-factory.
Top

Thanks Chris, a little more digging reveals that they are Diesel/Hydrogen dual fuel and no fuel cells, just burning it in an ICE.

So, thinking about buying a Leaf but its range is just about on the scary point for a trip from my place to Cirencester.

Had a look for charging up there but what does all this mean ?

Had a look for charging up there but what does all this mean ?

ABout 38 Miles? I would be topping up in Cirencester, with an alternative and range in hand should it be out of action. Stroud seems to have a few chademos.

With a Leaf when you are out and about the Chademo is the only rapid charger you are looking for. For me Charging from 20-80% will take around 40 Minutes.

The other chargers rated at 7kWh/32A will take around 2.5 hours to charge from 20%-80%. I have a 6.6kWH charger in my Acenta Leaf. Not really practical if you are out and about on a longer journey.

As mentioned in this thread, there are many clubs and providers. I joined Polar Plus part of BP Chargemaster and the one which operates the Chademo charging point at the Beeches Car Park Cirencester.

The others on your list run by Pod Point require a smartphone app to activate. Lidl and other supermarkets tend to partner with them.

Quite a selection of providers! 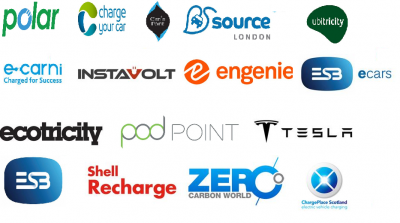 49 Miles each way for me Neil without doing any wandering about that's why I was looking at the likely pitfalls.

If I ever get around to it.
Top

In theory, pads could be dotted along the length of taxi rank/queue, with the cars just moving along to the next pad . . . If anyone could be bothered to install such a thing.

Wonder if there are many taxis that are on the road 24/24, with multiple drivers? If mainly one owner-driver, improved range and and time-off each day would likely allow a full day's battery driving.
Top

white exec wrote: ↑
18 Jan 2020, 21:12
In theory, pads could be dotted along the length of taxi rank/queue, with the cars just moving along to the next pad . . . If anyone could be bothered to install such a thing.

Wonder if there are many taxis that are on the road 24/24, with multiple drivers? If mainly one owner-driver, improved range and and time-off each day would likely allow a full day's battery driving.

from the archives the Taxi Rank at Newcastle Station makes use of this particular pollution hotspot. With only 5 pads planned for the Nottingham rank it surely ain't going to take that much time to move from position 5 to position 1 and off with the passengers.


NewcastleFalcon wrote: ↑
07 Jul 2017, 16:55
On the subject of pollution hotspots this takes some beating, and easily cured with a move to all-electric taxis....

This is where Taxi's wait in line mostly, if not 100%, diesels with their engines ticking over under the Central Station in Newcastle, before emerging out front to get to the head of the rank at the front of the station. Gives the opportunity for some of the drivers to light up while they wait too!

Not great photography but the tunnel is about 100 metres long and full of Taxis, at all times.

At 50kW and assuming a suitable state of charge to achieve that full speed (less than 80% typically) you would add about 33 miles of range per 10 minutes of charging.

However I think it's very doubtful that the inductive charging would do rapid charging speeds - it's more likely to be 7kW, in which case you're only talking about 4.6 miles of range for 10 minutes of charging - not really enough for a Taxi unless they spend a lot of time at the rank.
Top

More investment in UK charging infrastructure, but possibly also the development a live database for EV Drivers. These do exist already... Zap Map and Plug Share, granted with a few inaccuracies. Specifying the connectivity platform required for all new charging installations to enable real time monitoring of availability and whether it is out of order is maybe all that is necessary.

Transport Scotland under the guise of Chargeplace Scotland still seem to be taking the lead in the UK for the development of (non-Tesla) rapid charging "Hubs", with the upgraded Kilmarnock site now apparently completed in Ayrshire:

This site is located at Ayrshire athletics centre, and is one I have used a few times in my Ion for trips to Troon/Ayr back when it was just a single Evolt rapid charger and one AC fast charger...

Unfortunately it turned into quite a heavily used site and with only one rapid charger it meant you were almost guaranteed to find it busy and have to wait. Due to this last time I was in the area I chose to use the Instavolt rapid up the road which is located at a service station as it has two units.

However now this site has 5 rapid chargers I'll use it next time I'm there! I can see the original rapid charger is still there as well - it's right on the far left of the second image without a canopy, and presumably it is still in service as well.

Five rapid chargers is still less than what a site will ultimately need with widespread roll out of EV's however it's a huge improvement over the single un-sheltered unit that was there before.

In other news, it looks like Total are getting in on the charging game, at least in Holland:

It makes sense when you think about it. For years now speculation has been that retail service stations make more profit from in store food purchases than they do from actually pumping fuel - hence a move to becoming more or less a corner convenience store who also happens to pump fuel, along with a general reluctance to provide pay at the pump which would prevent people entering the shop...

EV charging provides them a captive audience who instead of being in and out as quickly as possible could potentially linger 30 minutes or more if proper food/coffee/toilets and room to rest are provided. It could actually even be a tidy money spinner for them in future if they provide good facilities...
Last edited by Mandrake on 24 Jan 2020, 17:48, edited 2 times in total.
Top

BP, Shell and Total - all buying into provision of charging points.
I think you're right, Simon: the waiting time is gift to retail site operators, where the customers have (for the immediate future) no option but to linger a while.
Supermarkets will surely follow.
Top
Messages: 553