AS reported in the "Chinese Car Companies what do you know thread" the US lags behind China in the race to secure the key elements required for battery production. Haven't checked but wouldn't be surprised if Europe wasn't even in the race, and precariously heavily dependant on supplies bought in from the far east.

NewcastleFalcon wrote: ↑
03 May 2019, 22:23
Haven't checked but wouldn't be surprised if Europe wasn't even in the race, and precariously heavily dependant on supplies bought in from the far east.

One of my nephews works for Yuasa in Australia, a pretty big operation there, I don't know if they're doing anything on the EV stuff, I'll ask next time we talk.

Ps. All the talk of China being at the forefront of EVs doesn't change the fact that China still buys or tries to buy all the coal that Australia can produce.
Top

Fuel cells and the resultant issues with hydrogen supply are one of the things I remember having a bit of a chat about with one of my lecturers back when I was at college (2002/3).

I really do wonder if there might be a market for someone to set up a big solar collector somewhere appropriate (thermal rather than photovoltaic), use that to power a steam generator and turbine - from what I vaguely remember reading a long number of years ago this is a surprisingly efficient way to get electrical power out without burning fossil fuels or faffing around with the political hot potato that is nuclear.

I'd not even look at exporting electricity outside the station. I'd look to have the station there to serve one purpose and one purpose only - to sit there chugging (well...sizzling) away and cracking water to provide a steady source of H2 on a decent scale. Rather than having this be one more thing tacked onto an existing energy company trying to make themselves look relevant in the "green" world, this would be the one thing that we would do...so hopefully economy of scale would be in your favour there.

Just strikes me that until the issues of hydrogen supply are dealt with, fuel cells are never going to get anywhere.

I was involved peripherally with the early stages of them trying to get the hydrogen filling station set up in Aberdeen, and it was such a complete laughable mess that it was beyond belief. Sure enough once things were set up (well after I left) it seems that it's remained just as much a joke as time went on, and still is to this day. They're only dealing with a handful of vehicles between a couple of bus operators and a few refuse vehicles and even then the issues have been neverending.

My experience there really suggested that none of the energy companies back then we're really interested, and it really needed someone to come along and disrupt the status quo, not unlike Tesla have done in the EV market in general...in that they haven't only provided an attractive car, but they have also done a lot to try to make it actually easy to use with their own charging system. Someone needs to do something similar with H2 - unless there's a whole package provided it's never going to take off. No matter how good the car is...and there have been at least a couple of decent looking fuel cell cars out there for a while...but no really usable supply chain to go with them.
Top

I get a periodic update by e-mail from Riversimple based at Llandrindod Wells in Wales. They are still plodding on with their Hydrogen fuel Cell car, RASA, in Wales. It is an odd looking beast. They seem to be very good grant getters and crowdfunders, and currently have trials going on in Monmouthshire of 20 of their vehicles. They have a hydrogen fuelling point in Abergavenny. The big advantage of hydrogen is its range, its biggest drawback being the infrastructure, and the logistics and inefficiency in distribution when compared to the charge at home via the grid advantage of battery electric vehicles.

Another advantage Hydrogen has as an energy store is that, unlike current batteries using scarce resources such as Lithium and Cobalt, Hydrogen is the most abundant element in the universe. Hydrogen has the highest specific energy density of any non-nuclear power source. Proponents say it is inexhaustible and can be created using many sources, including surplus grid power, bio plants and emission-free intermittent renewables.

..and our Chinese friends are by no means piutting all their eggs in the battery electric vehicle basket as this article testifies...


China’s Hydrogen Economy Is Coming
The world’s electric-vehicle king is seeking leadership in fuel cells, too. Investors are probably right to be excited.

does this class as a fuel cell?

The Veloschmitt has a 250-watt pedelec powertrain
Regards Neil
Top

The Veloschmitt has a 250-watt pedelec powertrain
Regards Neil

250W - so same rating of motor as the assistance motor in a Sinclair C5. That at least you would be a road bit lighter you could think...
Top

Bit surprised to see Shell have recently installed a hydrogen "pump" at Cobham Services on the M25 (which only opened last September), so they must know something.
Top 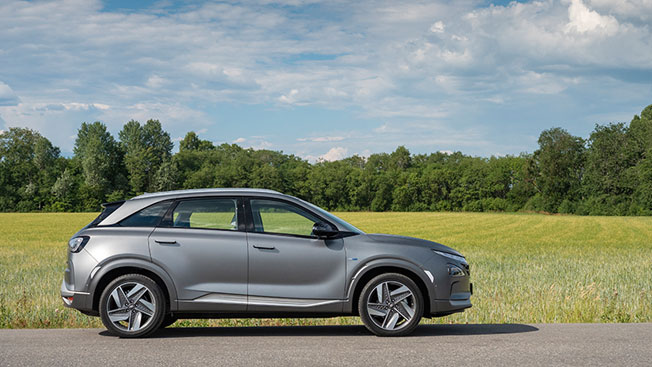 Mark Tisshaw, Editor of Autocar, said: “Hyundai has become a world leader in advancing alternative fuel technologies, and developing them to production maturity before its rivals. Hot on the heels of its Kona Electric - arguably a game changer itself - Hyundai has quickly launched NEXO, a new, hydrogen-powered SUV you can buy right now. Actually, it’s the latest of several generations of hydrogen fuel cell Hyundais, launched while most car makers are still years behind.”

Just need a "Hydrogen" network like the "calor Gas" network to make use of them in the UK right now.
A shot in the arm for the Uk's ironmongers just like the chemists of the past used to supply motor spirit in the pioneering days of motoring (well our ironmonger sells calor gas!)

Recently I saw a re-run of "James Mays' Peoples Car" (or something like that), the episode that was about alternative fuel cars. One vehicle he drove was the Hyundai Fuel Cell car, which he liked a lot. The only thing holding it back was the ability to re-fuel it; at the time of the recording there were only four fuel stations in the UK (or, possibly, just England) that have hydrogen fuel pumps.

Another vehicle he got to drive was a gas turbine car (that was owned by Jay Leno), and this could run on almost any combustible liquid, except (ironically) the petrol of the time, as it had lead in it. At one point James May was driving this car, and (apart from the engine noise) the only main difference was on the instrument panel; James commented that they were doing 3,300RPM, and Jay corrected him (or James picked up on his error), saying they were doing 33,000RPM!
Top

The mention of Calor gas reminded me of this.

Just a little bit extra business for for BOC, and the like.

Delivered to your door once a week. If indeed "Hydrogen has the highest specific energy density of any non-nuclear power source" 20 litres delivered once a week should keep most people motoring if they cant find a proper hydrogen filling station.

I had an account with BOC for welding gas, the problem with them was that they only rented the bottles and charged (over charged) a rental fee on them which cost more than the gas I ever used.

They had a monopoly on supply at the time so I just had to pay or give up welding, I suspect if they got into the car gas the same would apply.

Then of course the tax man would want his cut.
Top
Messages: 234