I'm going to gradually try and get an old GS (78 Pallas) back on the road. This is likely to be the first post of many. I am inexperienced mechanically but now have some time and enthusiasm.

I'm going to remove the interior trim as car is outside and I want to get a full respray in next 1-2 years. I'm saving for an outdoor carcoon.

To remove door trim, you have to remove armrest. The screw heads seem a bit different. Straight notch, but with an apparent little circle dimple in the middle. See attached photos. I don't want to strip the bolt. Can you just use a thicker straight head? Or is it a more specific tool?

You should be able to use a standard screwdriver for slotted screws, that's all I have ever used. It just needs to be narrow enough to fit in the recessed slot. It will not be a perfect fit, but should be enough to turn the screw. The 'tricky customer' will be the window winder. There is no pin or metal clip retaining same, it takes two flat screwdrivers to lever them off. Take precautions to avoid damage to the cloth fabric. Also, when popping the door card from the door, use some plastic from a discarded milk bottle or some such to save paint being scratched. The door opening/locking mechanism is simple enough, just prise the plastic cover off to reveal the fixing screw. You will have to 'unhook' the tang from the rod within the door.

PS: If you are taking the velour from the door cards, be aware that they are heat glued (by some process) onto the cards to achieve that lozenge pattern. It's one swine to get them off, and they will never look the same once returned - unless some specialist method is applied (whatever that might be!!).
Top

Thanks so much for your comprehensive answer, and the other tips.
Top

Yes, just a normal flathead to remove. As also stated above, the winder handles are a real pain to remove. Just be very careful as plastic can go brittle through age. Getting them back on is fun!

The lozenge pattern has gone awol on my front door cards, but is still present on the rears. Wonder what happened there!

Good luck with your project!
Top

Thank lads. Next step is getting the ignition barrel out. Had keys cut according to the cars original logbook but unfortunately don't work. They found blanks and all, and said that if I got the barrel to them they should be able to do it. The lock says "Simplex" on its black plastic rim. Have the Haynes manual on order!
Top

Removing the ignition barrel is not an easy job. The steering column needs to come out and access is pretty tight at best. I think the official line is to take the dash out. The problem is that there is no removable lower steering coupling cowling. It is all the one moulding with the dash. https://keysinthepost.com/ Can cut from a photo. Worth a shot to save yourself the aggro.

Yes, I had to remove mine as the switch part went faulty on mine. 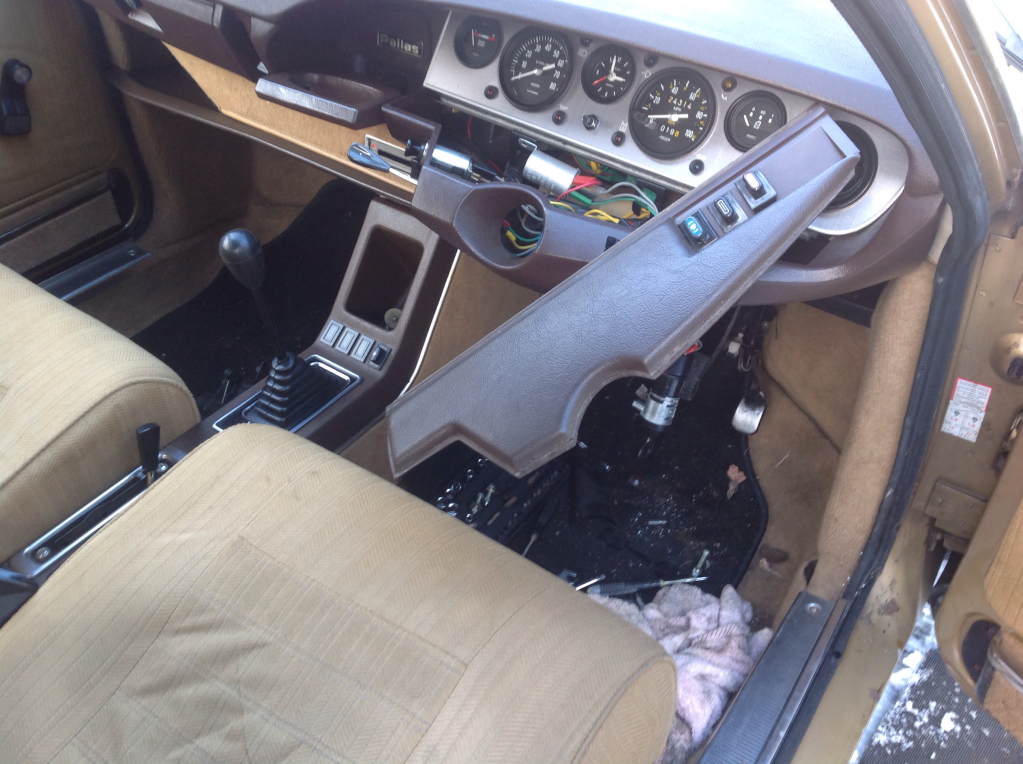 Sacre bleu Richard. It's never easy is it?

There should be a factory service manual, if you don't have it - better than Haynes in some respect.
here https://sites.google.com/site/citroenpublicationslist/
I haven't looked at the GS manual personally but GSA one was very handy.
Top

Yes. The top panel has to be removed to access the bracket that secures the upper part of the steering column. Steering wheel cannot be separated from column.

Haynes manual does not cover this job as such, but from memory does cover dash removal. Steering column and wheel will need to be removed to get the dash out.

The factory manual is quite comprehensive.
Top

Just a 10mm (spanner size) to undo the pinch bolt on the column UJ and wheel an upper column will withdraw. Insert ignition key to unlock the column lock, and take a visual note on whereabouts the spoke is before removing. Straight ahead it should be around 8'o'clock.
Top

Thanks Sonorami, that is a great resource. Some serious reading to do.

Unfortunately ignition key not working Derek! I'll give it a go anyway- have to get this lock out, thanks for the heads up
Top

It does vary though. Mine is fitted at 4 o'clock because it is RHD.

My suspicion with the second quotation is that the advice for RHD cars has been lost in translation. I'm also suspicious of the Book of Lies quote:
"Position the spoke of the steering wheel 30° below the horizontal towards the outside of the car (early models), 30° below the below the horizontal towards the inside of the car (later models) or with the spoke pointing vertically downwards (latest models)."

The last bit refers to the GSA of course. The middle bit, I don't know. I've not seen many wheels pointing to the inside of the car. Any pictures with the spoke pointing downwards at 6 o'clock seemed to be later handbooks probably for clarity of switchgear.
Top
Messages: 13 • Page 1 of 1