If my SAAB colour Chart playing about is anywhere near accurate I would guess that the particular shade of blue for your SAAB Zel, would be Embassy Blue! 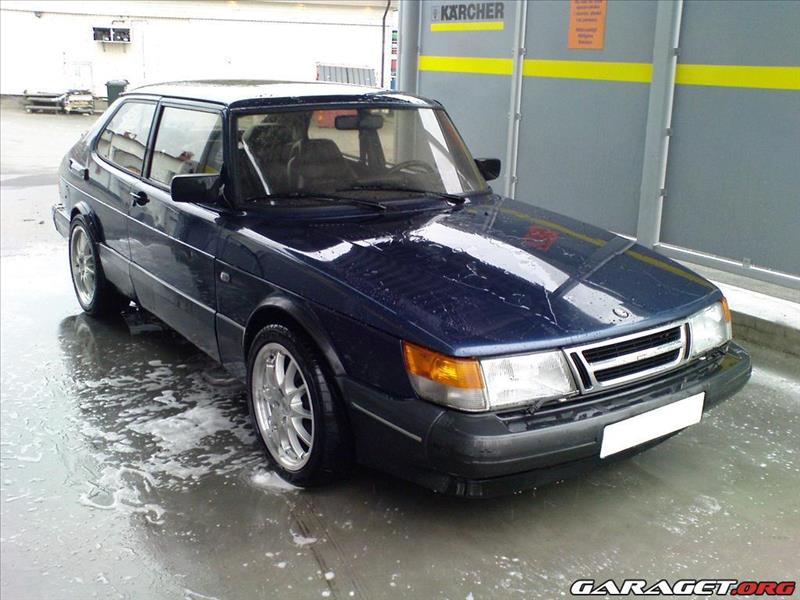 Looks fantastic when clean, but it's an absolute menace *to* keep clean.
Top

So today I took some time out to get some work done on this. 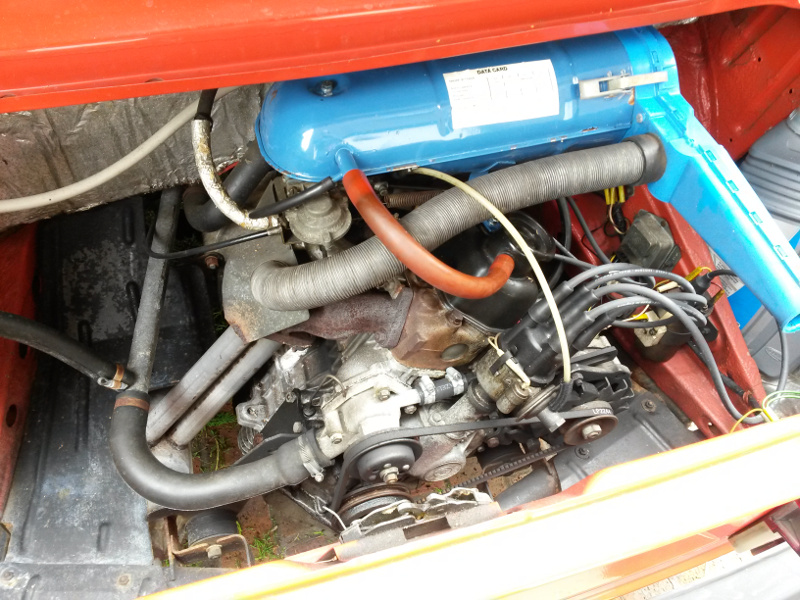 Without further ado...Off with it's head!

(Apologies for the horrible quality of some of the photos, obviously I was trying to concentrate on what I was actually doing so photos weren't at the top of the priority list).

Firstly, fuel hose off, plugged to prevent unexpected spillage of petrol all over the place, and tucked away out of the way. Here's a good tip a friend showed me for dealing with fuel hoses a while ago. 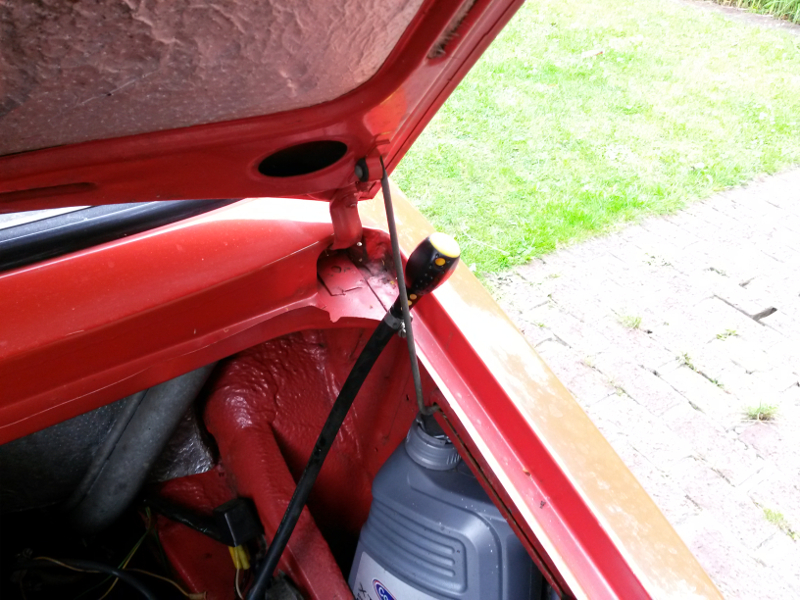 Air cleaner off, choke & throttle cables off the carb, anti run-on solenoid disconnected and brake servo vacuum hose off (which was still held on by those horrible hose clips that Skoda loved), and the exhaust separated from the manifold. 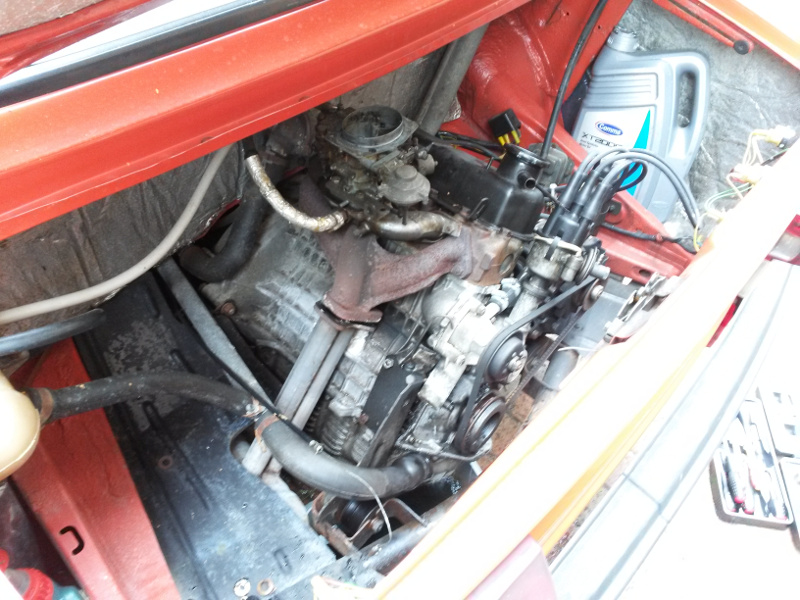 Next up was draining the coolant - about 90% of which I managed to capture. There was of course the inevitable bit that managed to splash all over one of the splash guards and escape though. Area was hosed down afterwards, and being a pet owner I made sure that the antifreeze I've used has that Bitrex stuff in so cats etc shouldn't go drinking anything I missed. Only two coolant hoses that actually need to be disconnected (outlet from the thermostat to radiator and heater return I think from memory). More Skoda hose clips got thrown in the recycling bin... 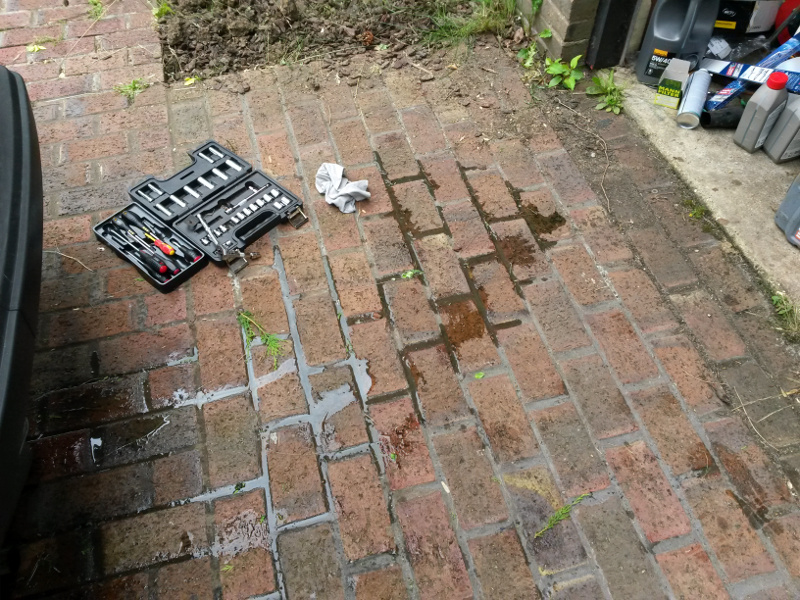 Rocker cover then came off, as did the temperature gauge sender and the HT leads, and it suddenly feels somehow as if you're really making progress.

I didn't even bother labelling anything save for numbering the HT leads as everything is so simple! Wiring wise I've disturbed a grand total of one ring terminal and one spade terminal...Far cry from a modern car! 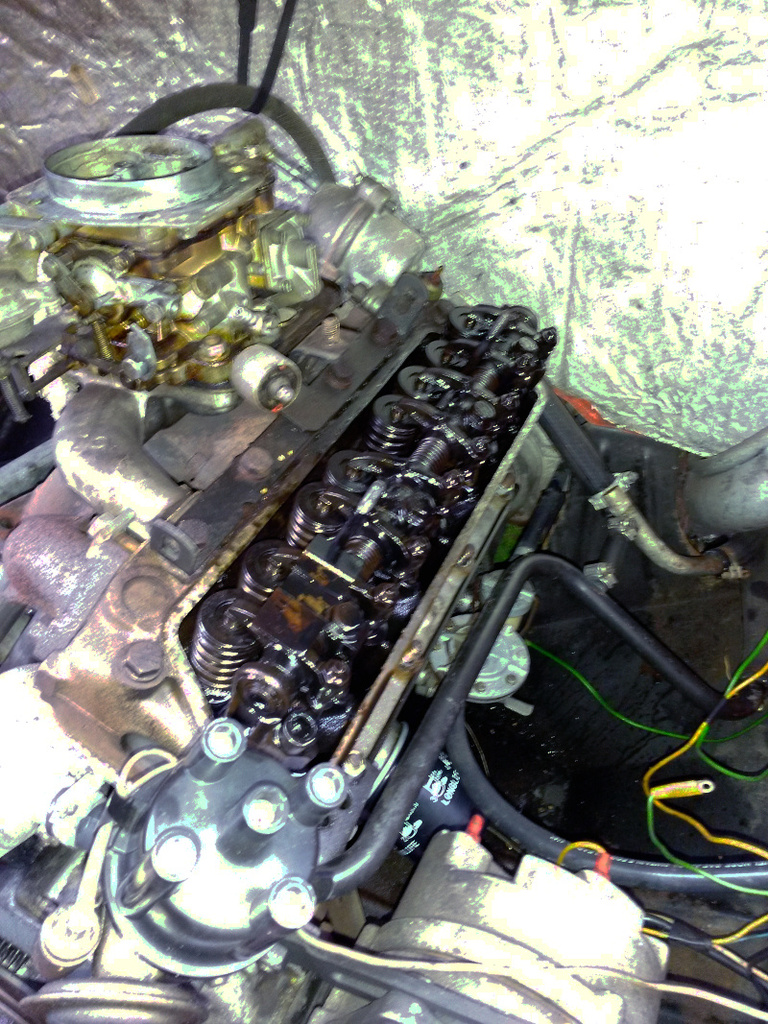 At this point I also took the spark plugs out as I realised that they were going to get in the way of undoing four nuts which are also involved in holding the head on.

Next, out start coming the head bolts, two of which also hold the rockers in place. Once everything was off the whole rocker assembly can just be lifted off intact and safely set aside. 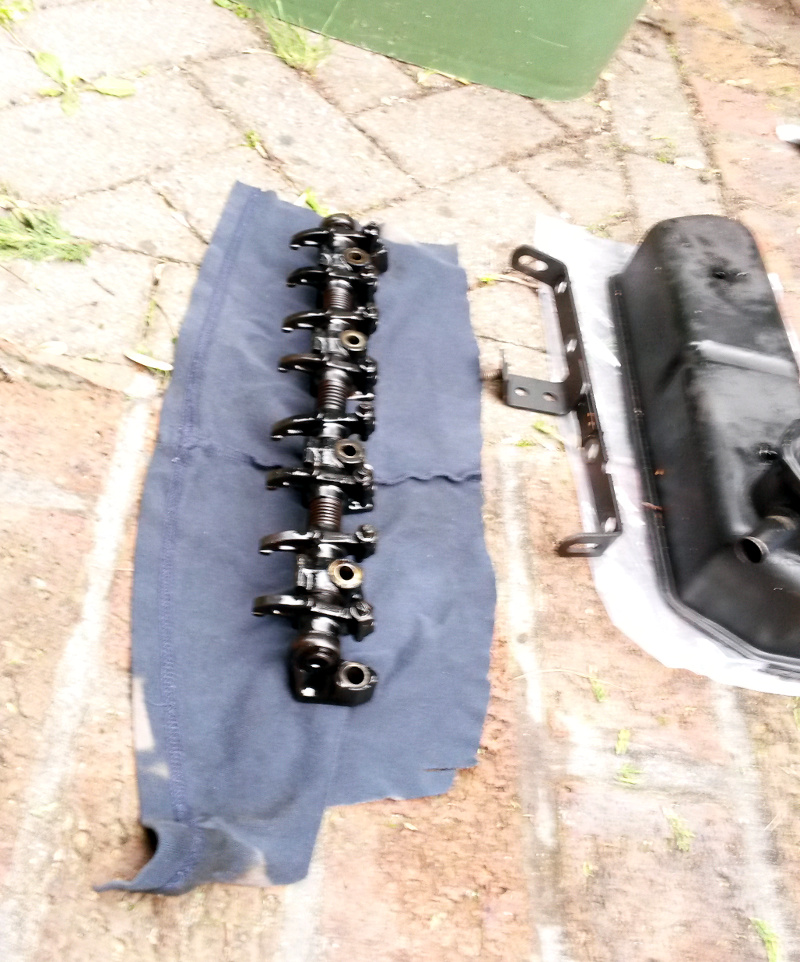 All that's left to come out now are the pushrods which can simply be lifted carefully out and also set aside (being careful to keep them in the right order). 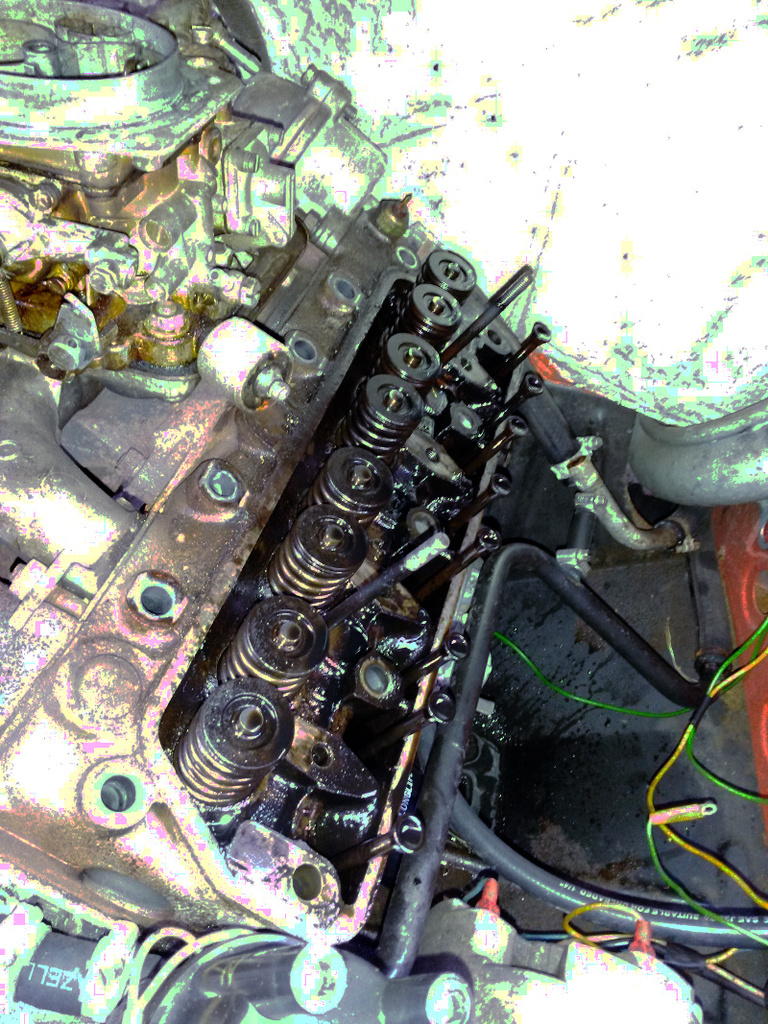 This is my highly technical solution to keeping the head bolts and pushrods in the correct order. There's a right-way around drawing of the head on the other side. 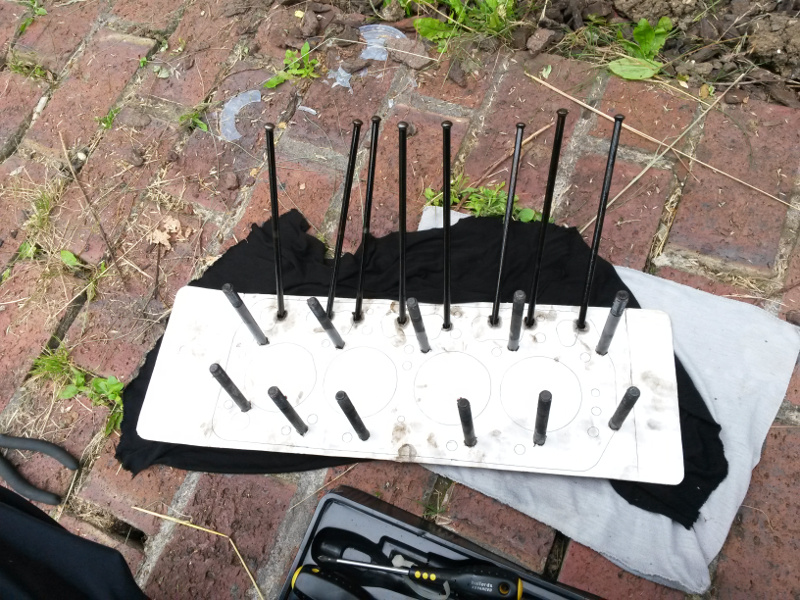 Then the head was carefully lifted off. Even with the carb and manifolds still attached it's reasonably easy to manhandle for one person, though an extra pair of hands was appreciated just guiding it off the studs and out of the engine bay. 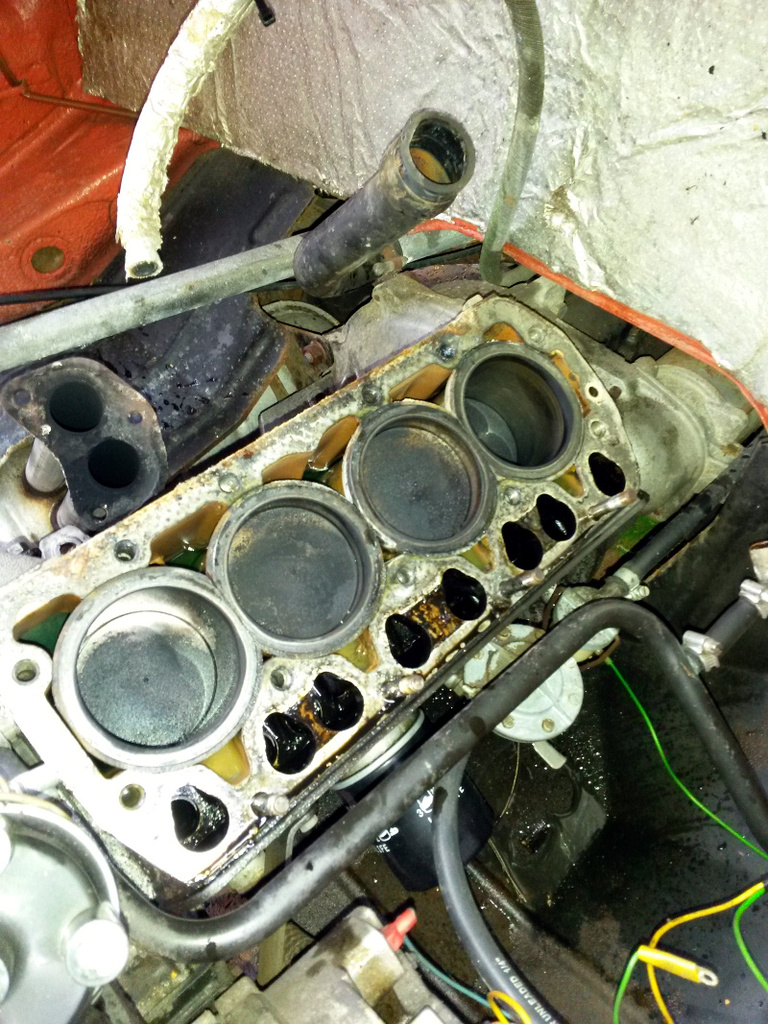 The view which greeted me then was quite unlike what I was expecting as I'd completely forgotten that this was a wet liner engine rather than a solid block!

This was the bottom surface of the gasket: 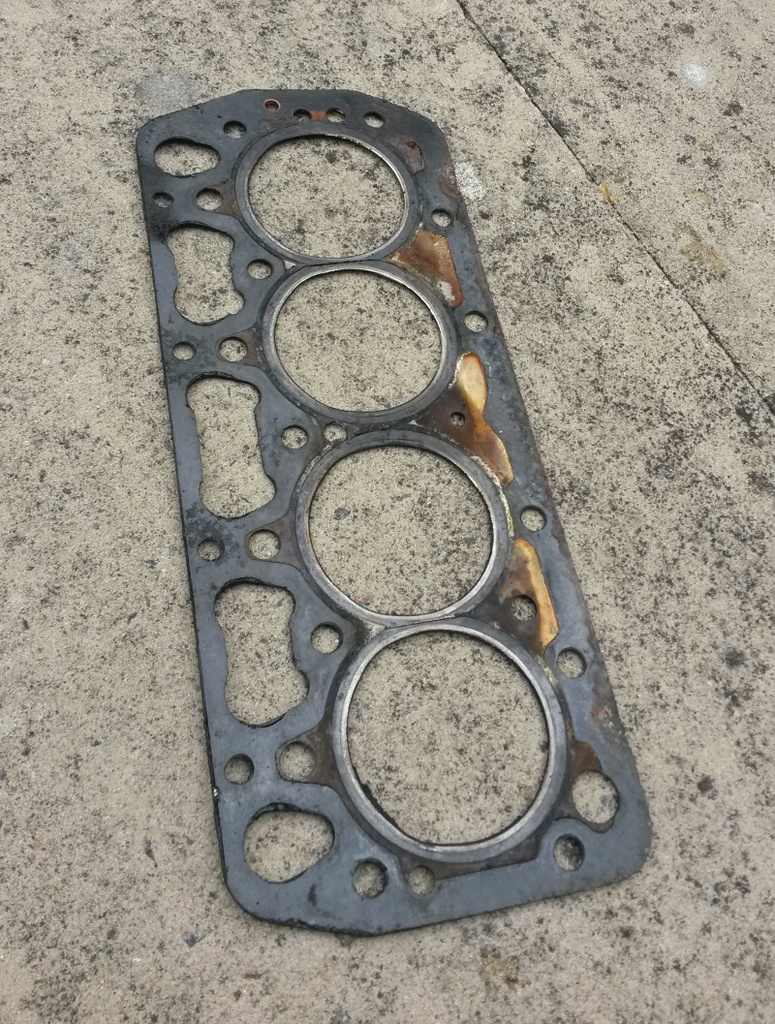 This was the top: 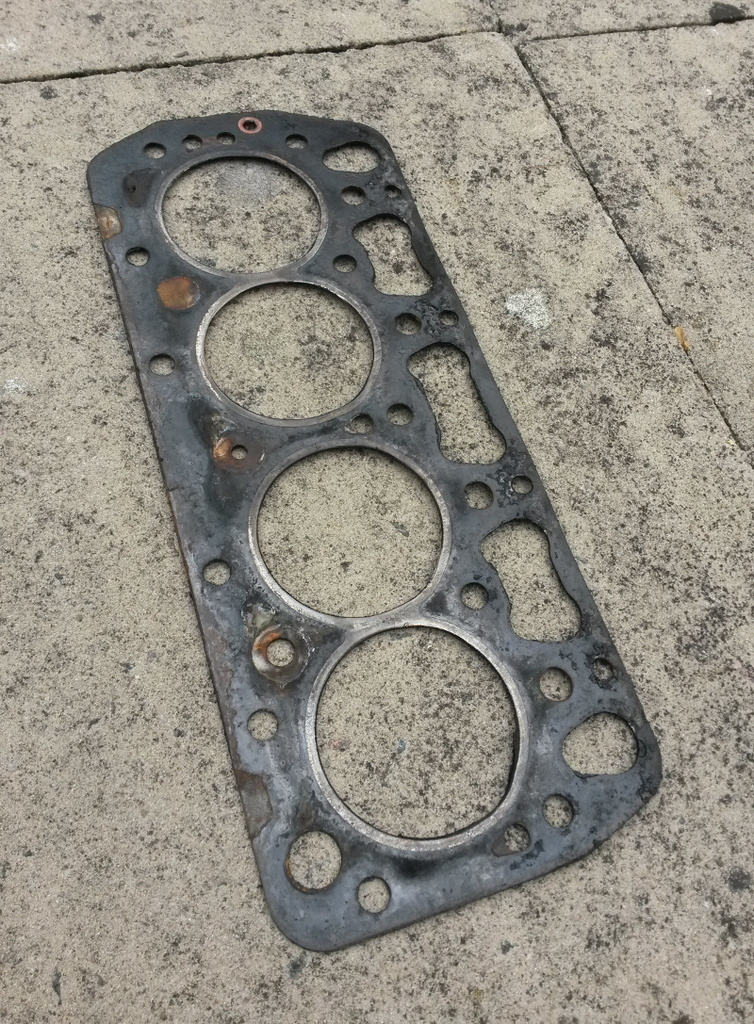 I never thought to take any photos of the head itself once it was off, will try to get some tomorrow.

Next step is to thoroughly clean both the head and the block/liners before I properly check that the head is straight, though initial check seems to be positive on that count. All being well, once that's done (if I can find my torque wrench!) reassembly as they say should be the reverse of removal with new plugs, an oil and coolant change afterwards.

So different to the Xantia!
Top

.....or indeed, a Dovrin BX14! Adjusting the tappets was a knuckle skinner of a job on that so the gasket change I did?

So different to the Xantia!

You now see why the first couple of jobs on the Xantia were a bit of a culture shock for me!
Top

So different to the Xantia!

You now see why the first couple of jobs on the Xantia were a bit of a culture shock for me!

Took me about 2 weeks to get to that stage when I did a BX TD - I kept having too go and buy new tools! And I can assure you that head + manifold + turbo is very heavy!!!
Top

Just out of sheer curiosity went and weighed it.

Head, both manifolds and the carb comes in at 21.8Kg.

Just trying to figure out what to do about the snapped exhaust manifold to downpipe stud at the moment - chucking the head in the boot of the Saab and running over to F1 and looking pitiful and letting them use their decent tools and knowhow is looking a good option right now!

The stripdown to this stage probably took us about an hour and a half. Reckon in a garage with all the right tools and such it could be done start to finish in four hours or so.
Top

Presume the stud is in the manifold? Is there any sticking out? If so you might get it with a pair of mole grips or stilsons, or an Irwin bolt extractor. If nothing sticking out, then you could try welding a nut to it through the centre of the nut. The heat from the welding will help to free it - and you can soak it in plus gas before you start to help with the chance of getting it out. Drilling it out possible, but you need to be accurate as the manifold is probably a lot softer than the stud! If there's an engineering shop near you, they might be able to spark erode it.
Top

Spent an hour or so on it this afternoon.

Firstly I decided to remove the carb to make things a bit easier to manhandle and to ensure it didn't get damaged. Only four nuts after all...three of which were loose. Can anyone say probable vacuum leak? 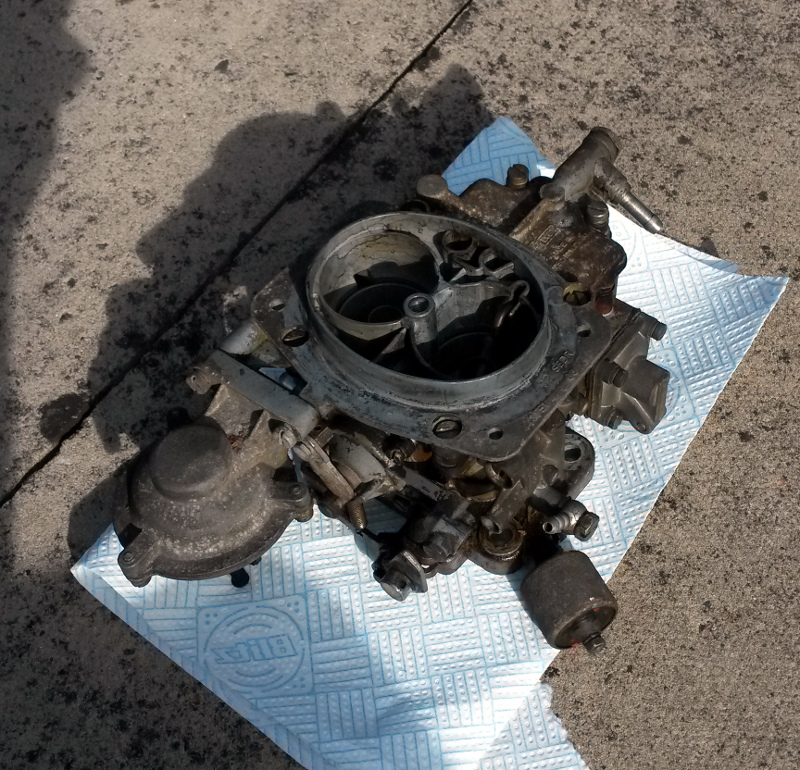 Then I got the head outside into the sunshine so I could get a proper look at it. Quite a bit of carbon buildup, but I was expecting that to be honest given how long it is since the car had a decent run. 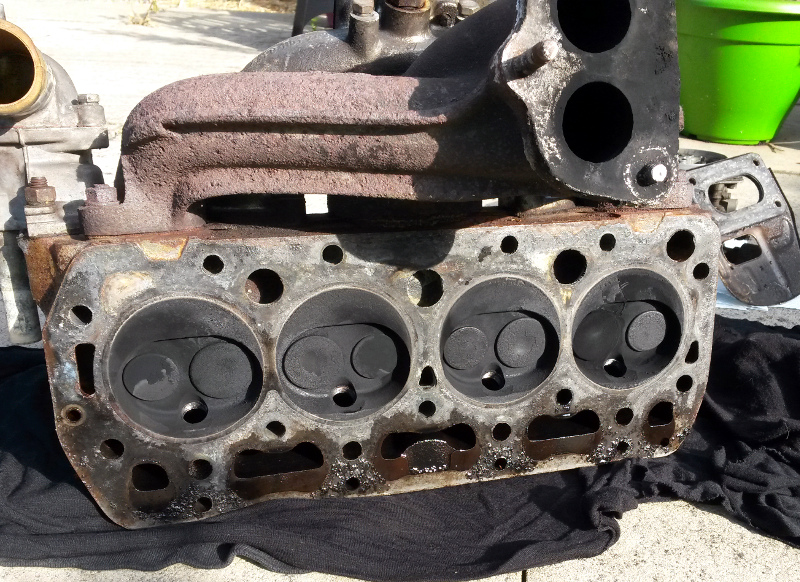 This little blighter is the exhaust manifold to silencer stud that has snapped. It's in the manifold, and I don't think drilling it out is an option as even if I took the manifold off, the centre branch is in the way I think so there's no access. I'm not too worried to be honest if the hole remains perfectly round as there isn't a stud going back in there. These things break exhaust studs for a passtime, so once that stud is out it's getting replaced with a stainless steel nut and bolt so I don't have this problem again a year down the line when the exhaust needs changing! 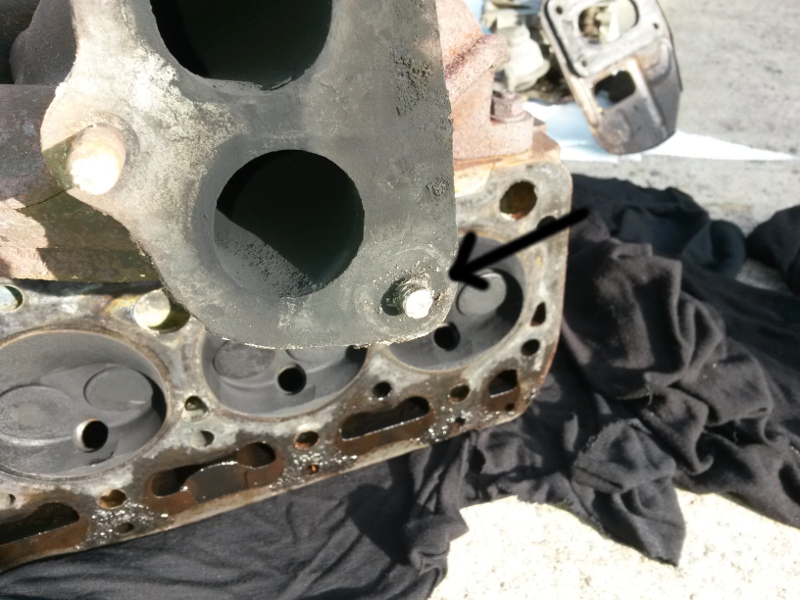 Once I started cleaning things up I got a bit of a surprise...have had three of these cars and I never realised before that the head was originally actually painted grey! Once I've got everything ready to reassemble I might give it a quick touch up. 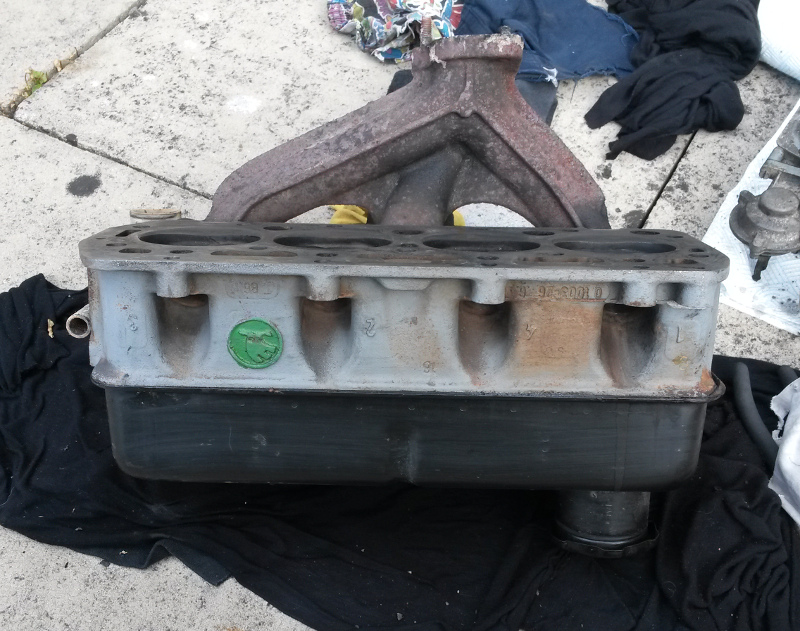 Head surface is starting to clean up nicely now, and even the crud in the combustion chambers is coming out without too much protest. Given that I didn't have any issues with low compression or anything I'm reluctant to disturb the valves (the car only has 18K on the clock) as that generates a lot of extra work having to re-grind the seats and everything... 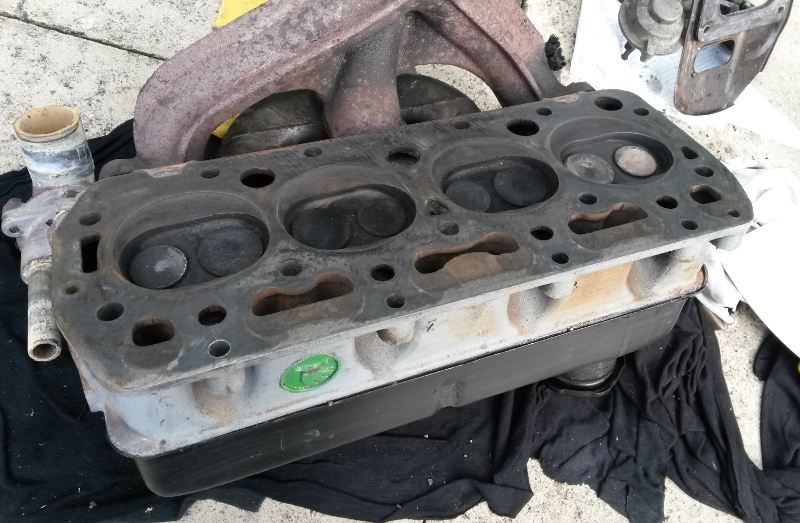 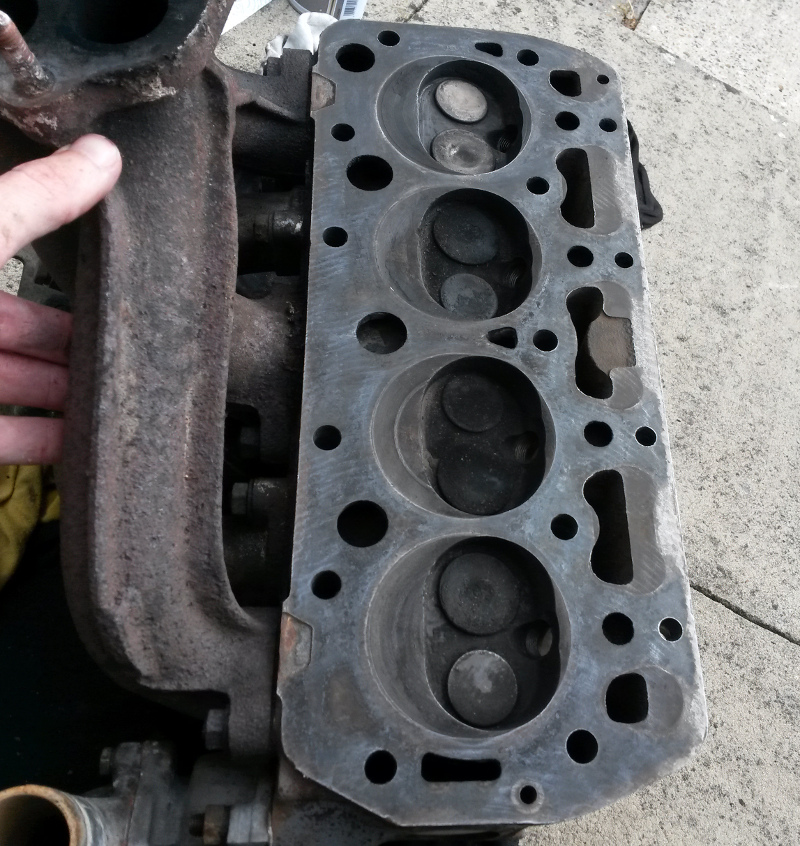 Only cylinder no 4 has had the combustion chamber cleaned in any depth so far.

Time consuming bit this cleaning...Keep thinking you've got rid of all the residue on one area then you discover a bit more!

Rocker cover, carb heat shields etc will probably be thrown in the "parts washer" tomorrow to save me some scrubbing, and will continue with the cleaning of the head before moving onto the block etc.

The real headache of the day actually turned out to be trying to find *anyone* who still sells heater hose by the metre/foot! I figured that while I had the head out and decent access that it would be daft not to change the two remaining bits of old hose in the engine bay, so I needed some hose for that. After about two hours of driving around in circles, I eventually ascertained that Motorserv over in Wolverton still do it, so I can actually replace that when things go back together. ...Including the previously bodged balancing pipe which was replaced with the feed pipe from a washing machine when it originally split and I couldn't find anyone who had the hose then...Do as I say not as I do and all that...but it worked!

That stud'll come out - an Irwin bolt grip will get it if you give the manifold plenty of heat. Otherwise weld an oversize nut on it and my guess is it will just wind out.
Top

Interesting. A tool I will need to investigate in the morning!

Always a bit nervous of using a lot of heat on manifolds in localised areas in case I crack them - especially these ones which are known for cracking easily.
Top
Messages: 5230