robert_e_smart wrote:I'd forgoe the Jersey, and wind the clock back!

At least i can have the door re-sprayed if theres any positives to be taken from this,biggest pain in the hole is the windscreen

You have screen cover? If not, get it!
Top

I'll have to look into it,does it affect your no claims bonus or the premium?
Top

Doesn't affect the No Claims or Premium as long as its part of your cover. I can't say how much more it costs to add screen cover onto your policy though.
Top

I just checked my policy,they only cover if you have fully comp which i don't

Some people just don't care do they

Some people just don't care do they

and then on top of that she never reported it ....i wonder why

I'm going down the guards in a while so we will see what they have to say to me...I'm looking forward to todays excuse,there can't be many left in the book she hasn't tried yet

Can you not deal with another guard or put in an official complaint?

My daughter's boyfriend at the time smashed the screen of her SAAB cabriolet.
SAAB quoted her £1,000 if she paid cash, more if a credit card payment.
Autoglass quoted £350+VAT.
She had it fitted for £230 NQA.
Top

myglaren wrote:Can you not deal with another guard or put in an official complaint?


That's what i said on wednesday when i was down there and another female guard cheekily said "well she hasn't told me has she,so how can i !"

If she isn't there today,i'm gonna ask for whoever's in charge of amateur hour down there and tell them i want it dealt with pronto,it would be a different case if i was stopped by them for having no wing mirror

Time has absolutely flown by since months since my last update

3 months of ringing every couple of days to her insurance company finally got me what i was originally offered by them....50:50

The reason it dragged out was because her insurance crowd were waiting to see if the cops were gonna take her to court for leaving the scene of an accident etc etc which of course they are not,they have to do all of this corespondance by letter which takes weeks of course

So i had no choice other than to settle

it's taken so long for a simple open and shut case that i had become so pissed off with it that i can't bear the thought of even going down to the guards again to see why she won't be prosecuted.

In all honesty i'd rather see her go to court and get strung up for it and recieve no money,but anyway enough rambling...

I found a door on ebay that cost me a snip at just under €90 delivered,considering that to repair my own door would have cost €516

It's an exact match and i'm going to try and get this fitted on saturday,it's in good shape and better than my own pre-damage

In other xantia matters i bought a lovely black leather interior off ebay aswell for £51!!!

I have all the door cards and rear seats fitted,i just need to fit a few bits on the dashboard and maybe try fit the front seats

XantiaDaveEire wrote: I'm still in 2 minds as to what to do as they are electric seats and i haven't got a clue where to start with the amount of wires and connections that came with the seats

Did you get the looms to go with them Dave? If so it's not hard at all... If no looms it's still not impossible..
Top

Yep a colossus of wires Jim and a small silver box,presumably the motor?
Top

Ahh that’s good Dave. I have the wiring diagrams.. Not sure about the sliver box though as all motors are in the seats. You should have the heated seat controllers too that go in the centre console oddment tray.

On the looms, look for a heavy yellow wire. This is the power one and by connecting that and the hefty green/yellow wires to a good source of 12V (yellow to positive, green/yellow to negative or earth) the seats should be motorable. In fact you have got to be able to motor them to be able to install them...
Top 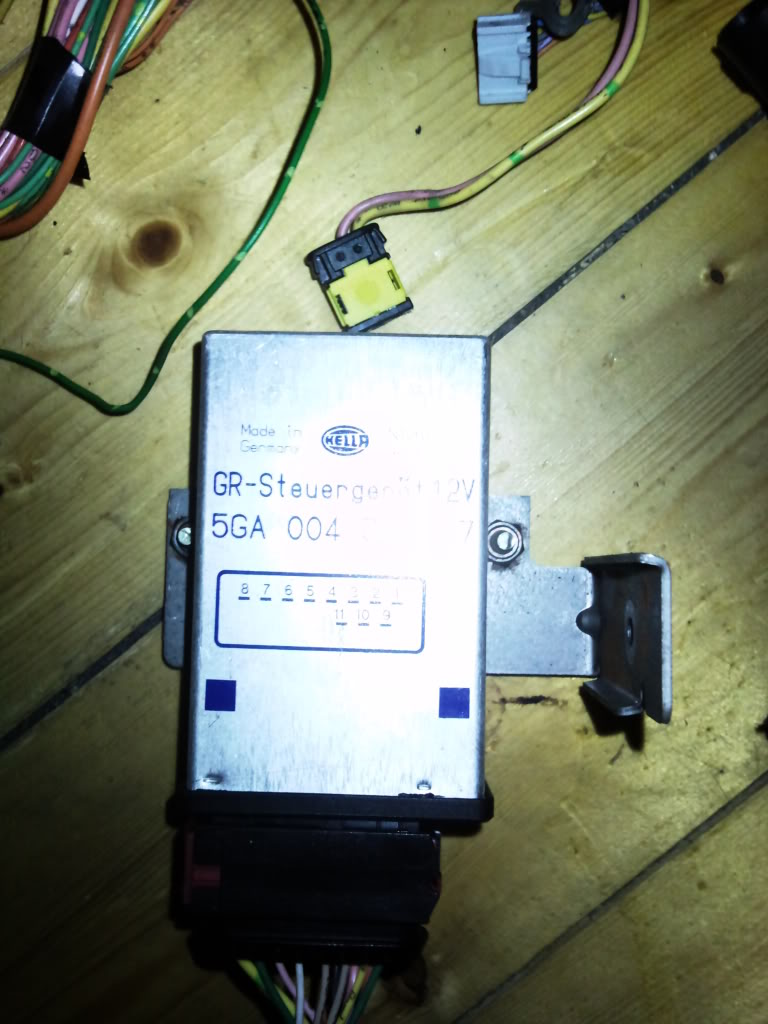 This is the silver box Jim

I won't bother with the heated seats as they said like more hassle than there worth ,as long as they move up and down that'll do me

What are the rest of the wires for?

Would it be possible to use the exsisting loom ?I know nothing about electrics so i apologise

That Dave, is a cruise control ECU and as rare and valuable as a hen's tooth... I can see why the suppler thought it as to do with the seats as it lives on the bottom of the drivers B Pillar...

All the other wires are for heater control...
Top
Messages: 106