Zel, one of those MK energy-saving homes in Bradwell Common was lived in by a friend of mine, Dr Mike Beetham, one-time head of academic computing services at the OU. A neighbour of yours?

I visited the house a couple of times: the only one in the Close with a garage (and a double, at that). The architects, he said, thought that cars wouldn't much feature in the future. Mike was the founder member of the P6 Rover Owners Club.
Top

Not a name I recognise, but that doesn't mean much!

Probably the Solar Home if it has a double garage, which is just round the corner from us.

It's the one thing they got very wrong...the reasoning behind our own garage being very narrow is that "Cars will be smaller in the future." Made sense with the success of the Mini and with things like the Metro and Fiesta being such strong sellers at the time...but they got that a bit wrong. You'd never get a modern car in the door, much less be able to get in/out of it. Well they couldn't get everything right!
Top

Well, two of your vehicles would fit in the garage; the Invacar and the C5!
Top

One of the reasons I was drawn to the Invacar once I learned of their existence! The sliding doors really do make so much sense and save so much space.

Today was the first day that I successfully managed to rescue something from our tip. They're absolutely immovable on the "Once it comes in it never leaves rule" but managed to bag these while depositing a load of other things in the electronic waste bin while nobody was looking. 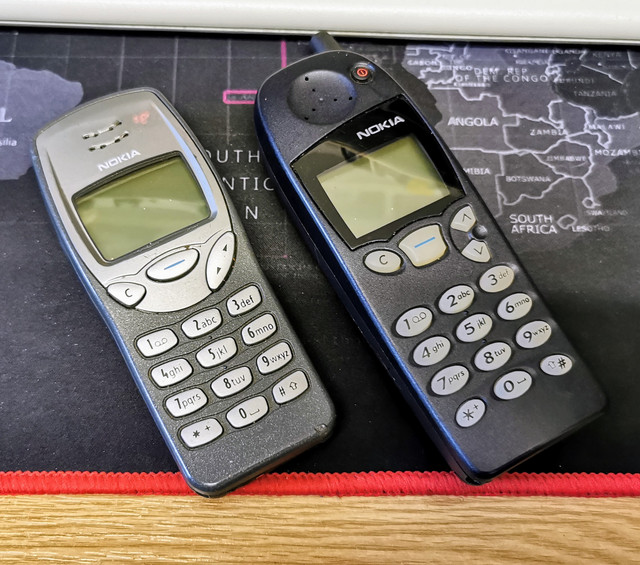 The 3210 sadly is a write off due to having suffered catastrophic battery leakage. The 5110 though looks more hopeful. 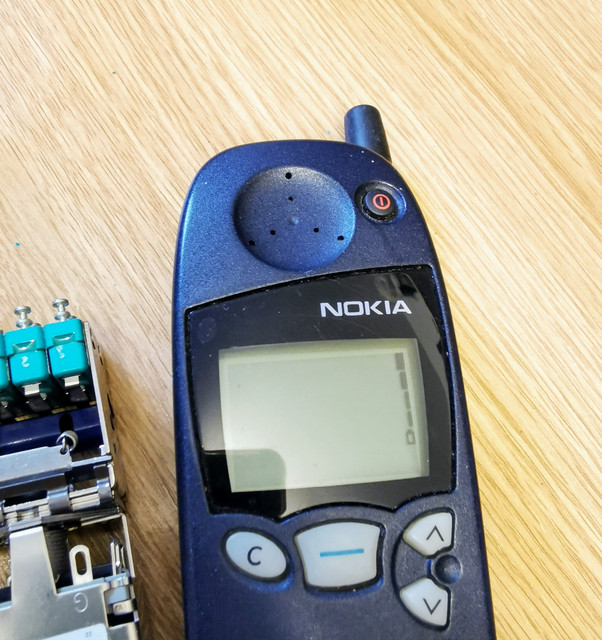 It's at least trying to charge, battery is understandably shot, but it's showing signs of life at least.

I don't specifically collect phones... though by now I have a pretty good show from the present day back to the mid 90s. Probably the two I find most interesting are an NEC e313 and Samsung S8300. Both from that strange no-man's-land between mobile phones being just that and what became the smartphone...but before anyone had really decided what form that would take. They vanished pretty quickly once it became clear that the iPhone-esque design was going to become the norm, so I see them as an interesting time capsule.

Even after all these years though, the Motorola V3 is probably still my favourite bit of kit in that box though. It's just such a wonderful bit of design and engineering.

Guess that's an obvious little addition I could tack on to the vintage technology section of my website now I think about it...

Bit irked the weekend has eaten up every second of time so I've not had a chance to give the brakes on the van a check over. Will just need to drop it off for the garage to sort in the morning. Really hoping it won't turn into a massive epic this time... I've still not quite got over the £600 bill from Egerton's last year when they "fixed" the rear brakes...
Top

My old friend has been forever changing her mobile phones never really satisfied with what she's had but has worn out an old basic Nokia like the one in your photo.

So at the weekend I took her to Tesco to find another replacement, she opted for one of these, I set it up for her and I'm astonished at how much tech they managed to put in a £30 phone, internet, camera, calendar, radio, games, alarm clock, on and on.

Not that she'll use much of it it will be used for texting and the occasional voice call, all the rest will go unused.

That looks interesting and only £5 more than my current one

Pretty sure those are the phones we used to give out to our community transport drivers when I was back at the council...back prior to 2013! To be fair in that segment it wouldn't surprise me in the slightest - they did the job and proved to be pretty much indestructible provided they didn't get drowned or run over. Plus they were cheap enough that it really didn't matter when the odd one here and there did die.

So the van was back in for remedial work and a retest this morning. Something became immediately apparent pretty much the moment I pulled out of the driveway - and that was that she was now pulling up in an absolutely perfectly straight line, rather than pulling hard to the right under braking. Apparently whatever was causing the nearside caliper to be lazy has cleared itself. Sure enough, on the rollers at the test station the brake balance was spot on. One headlight adjustment later... 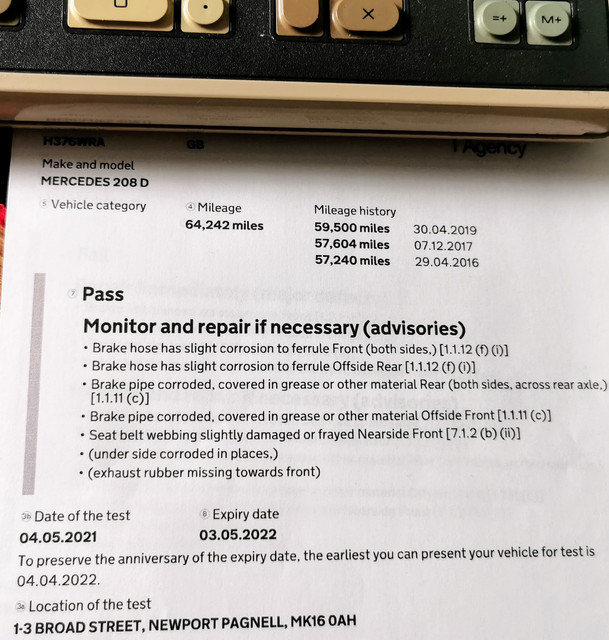 [] Corrosion on brake hose ferrules. Knew that going in. I'll look to get the flexible brake lines changed in the near future as I agree they've seen better days. While I can't see any perishing the rubber just has that "old" look to it that doesn't inspire confidence. There are only three on the van and they're not expensive.

[] Corrosion on rigid lines. They're fine I reckon and just need cleaning up and given some protection. If anything looks even vaguely suspect though I'll change it.

[] Frayed nearside seatbelt. It's been on every test back to about 2003 I think. Someone obviously used to regularly shut it in the door. If I come across a breaker at some point I'll change it, but I'm not worrying about it in the meantime.

[] General underbody corrosion. Yep...It's an 80s/90s Merc. The underside of the cab is basically a series of patches held together by some bits of vaguely cab-shaped metal...Though it doesn't look to have got any worse over the last couple of years - I do think that a Vactan/Dinitrol party will be in the van's near future though. I did actually think about doing that before the MOT, but I'd rather the tester be able to see it warts and all given it's the first time they've seen the vehicle.

[] Missing exhaust rubber. It isn't...There are about half a dozen exhaust layouts used on this van and the hangers are present on the chassis for all of the variants - the one that's "missing" is positioned in such a location that on this system there is physically no way you could fit one there, it would pull the pipe into direct contact with the bodywork - not that there's a hanger on the pipe there for it to attach to anyway.

The initial issue with the brakes though is a clear signal that she's telling me that the calipers need to be given a good clean and inspection though. Aside from anything else the front brakes squeal horrendously when you're coming to a halt and have done as long as I've had the van. I'm seriously tempted to just to fit the new pads I've got in stock to see if that stops the squeaking as it's absolutely maddening in stop/start traffic.

Did mean I could get her out for a decent run this afternoon though which I'm sure has done the world of good. Also finally got around to replacing the horrible aero hybrid wipers which just looked daft. 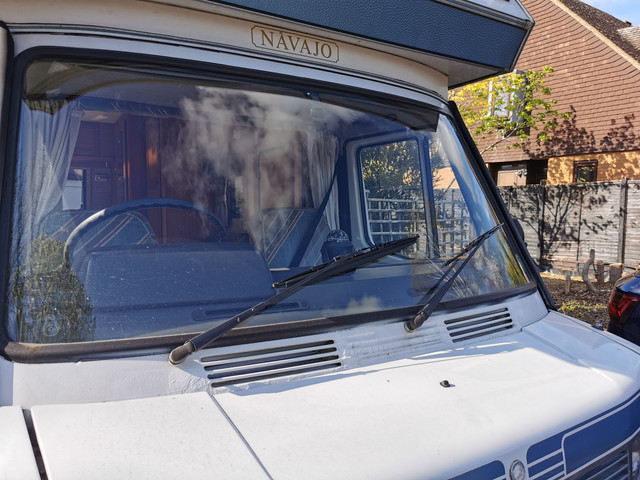 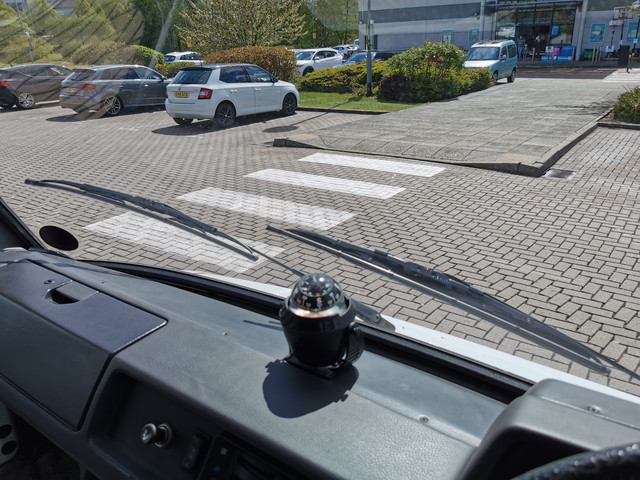 If you couldn't see them so obviously from in the cab it might have annoyed me slightly less. Anyhow, standard wipers now on...and again have confirmed that there's nothing for making you realise how badly degraded your old wiper blades were than fitting new ones.
Top

Congrats on the MoT pass Zel

Seems to be a week for disintegrating wiper blades - Xantia decided to start shedding the rubber from the driver's one while I was out this morning so that too has joined the New Wiper Blade Club. 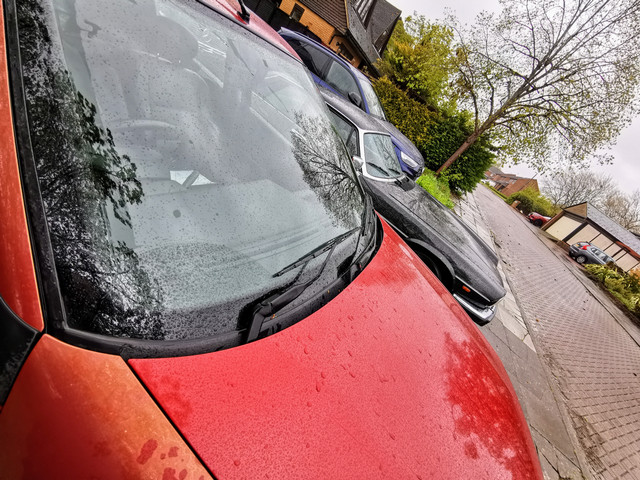 Disappointing to see the hybrid blades fail so quickly. They performed very well, but at more than twice the price of normal ones they would need to last at least twice as long as they did for me to consider putting them on again...so back to conventional ones it is. To be fair, they look absolutely daft on anything made before about 2010 anyway so probably for the best.
Top

Little been going on lately really as sadly boring responsible adult homeowner tasks have been keeping me very busy.

A little package arrived this morning though. 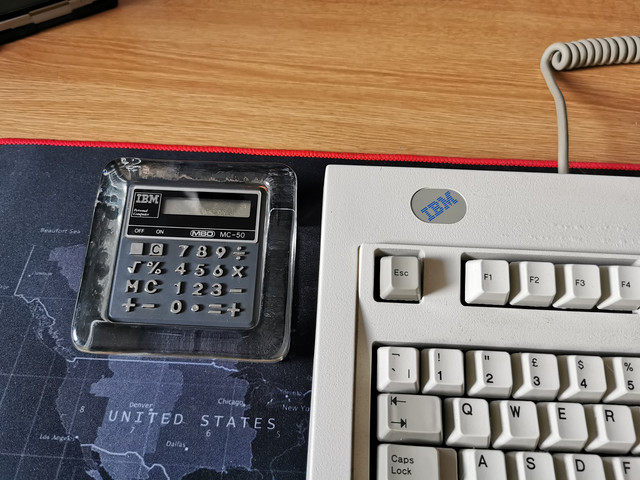 Lovely little IBM branded calculator paperweight. I wasn't expecting to win this to be honest as IBM memorabilia usually goes for silly money. Quite possibly because the calculator was dead so a static exhibit. I didn't really care either way as it's an interesting bit of desk furniture anyway and will look great next to the IBM keyboard (which is one of those bits of technology I can't ever see me replacing).

Oh...and one turned up on Saturday too. That was another £0.99 starting bid item that nobody else bid on so was less than a fiver delivered, so an Imperial 91S has also joined the calculator collection. 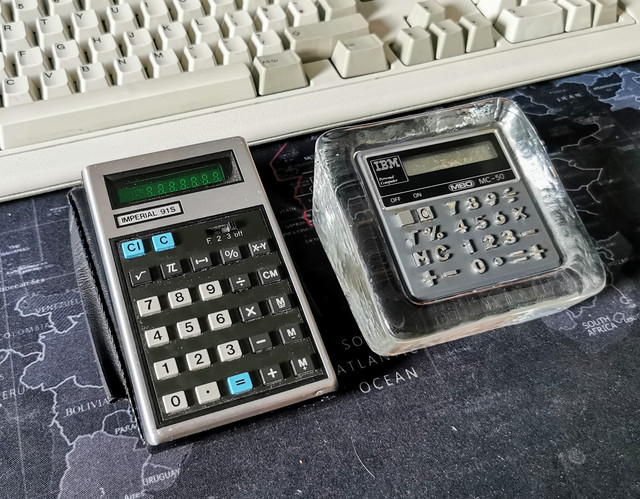 I don't have a problem...I can stop any time I want!

Of course being me the calculator built into the paperweight wasn't going to be left as a static exhibit if I could fix it was it? On removing the cover it was obvious no batteries were fitted, replacing those though did nothing so I pulled the board out.

Can you see anything wrong here? 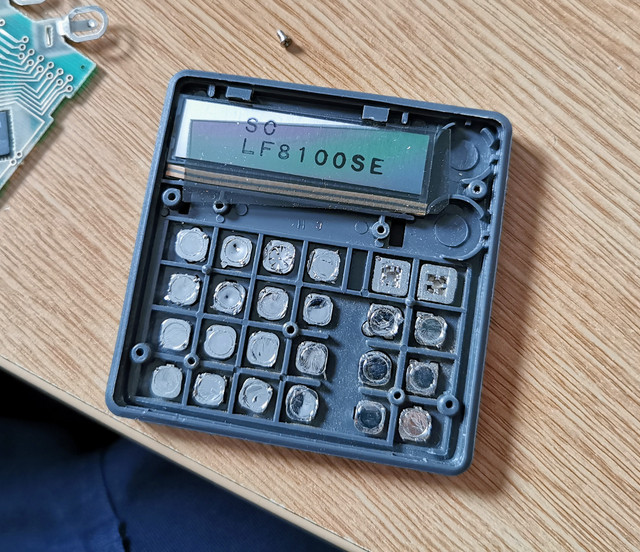 Yes, that is indeed the front display polariser. Behind the display. Well that's not going to be helping anything is it. Sorted that out, cleaned the inside of the display window and put it back together and... 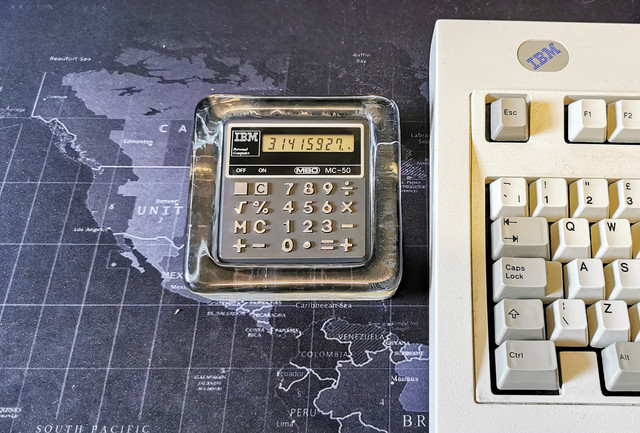 Have to wonder if that's a manufacturing defect and it's never worked since it left the factory in May 1984.

Tell you what though, by mid 80s standards it's a *slow* calculator. All 9s divided by 1 takes a good half a second. That's mid 70s territory! Guess that's the price paid for something so cheap as to be built into promotional novelties like this.

It's a lovely thing though and given I do tend to have a window open or fan in use a lot a paperweight is honestly something I'd been meaning to add to my desktop for a while.
Top
Messages: 4720