I just did an e-bay search, and found this;

I don't know if it would help, as neither Puegeot or Citroen are mentioned. Still, some of the seals look like the ones in your photos.
Top

That looks like a good lead, thanks. I'll try them Monday.
Top

That nylon ring looks well deformed Mike. I wonder if it was slightly mis-assembled when the pump was first made and it's taken all this time to fail?

Hope James's parts lead will bear fruit and the pump can be made good again...
Top

Hard to tell if it was badly assembled but that's my thought also. Although the rings look warped they are both still flat and straight. My guess is there was always a pin-hole leak between the two which has eventually eroded both nylon and rubber ring to the state they are in now. I should have put something in the picture for scale, those rings are tiny.

I've owned the car from new and have always serviced it myself every year (always less than 10K miles). Every other year I also do the engine air filter and pollen filter, but I have always changed the fuel filter every year regardless along with the engine oil and filter.
When it was 2 or 3 years old I found metal fragments in the fuel filter and, after reading about lift pump failures I thought that it would be the first thing to need changed, but it's still going strong. I always drain, check and clean the fuel filter housing when changing the filter but it's always been clean for at least the last 5 years.
Top

I had tried to find a fuel pump repair kit using the number I'd assumed was a bosch part number on the pump. Thanks to Hell Razor5543, and a bit of dialogue with a foreign seller, in 11 days or so when it arrives from Latvia I'll be able to have a go at reconditioning my old pump. (Note- the bosch part number is the
0 445 010 046 type number, not the CR/CP1S3/R65/10-16S code I'd googled and asked the seller about)

And after seeing the state of my outer crankshaft pulley I now know why the engine sounds a bit strange over 3000 RPM. Actually it's bloody obvious when I wind the window down and rev the car while it's stationary. So this weekend I will be changing the Aux belt and pulley.
Top

Thanks for your thanks. All I did on e-bay was to search initially for Bosch HDi fuel pump refurb kit (no luck), then Bosch HDi fuel pump repair kit, and found a few options. The only one that showed the type of seals in your pics was the one I posted. I hope that it works (and I think, based on their picture, there are seals for a few pumps).
Top

There looks to be a lot of parts in the repair kit photo, but I think it's only for one pump. There are 3 large black seals for the piston covers. In the pics I uploaded of my pump it isn't obvious but there are 3 pistons. One of which has a solenoid to disable it at low revs.

I received a Latvian post office tracking number the day after I ordered the repair kit. I may be sad but I really like tracking my parcels. I'm sure everyone will be fascinated as I am to know It sat in Daugavpils for 3 days and then took just 20 hours to get to Rīga.

I changed the bottom pulley and belt this morning and the car now sounds a whole lot less rattly. Putting the wheel arch liner back on took longest. I half destroyed the clips removing it last weekend so totally destroyed a few of them today. Had to get creative with self-tappers and cable ties to hold it on for now until I can get a bag of clips. 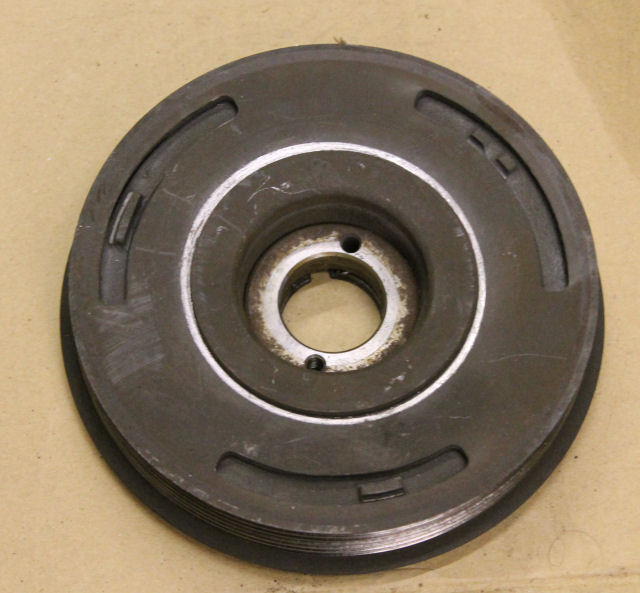 I like your blog, one thing it surely isn't is boring

CitroJim wrote:... one thing it surely isn't is boring

Thanks Jim, I'll have to work on that.

So Saturday night I washed the Xsara and the '807.
Pump repair kit still in latvia.
Top

Pump repair kit arrived yesterday. Genuine Bosch. Lot's of bits but I think they all have a purpose. Unlike the carburetor gasket kit I once got from the dealer when I had an AX GT. Still got ¾ of that kit left.

I could just replace the 2 tiny O-rings and stick it on the shelf in the garage, but I think a full overhaul with pictures would be more useful. I have no way of testing the pump after I repair it, other than fitting it to my car. And I do like taking things to bits.
Top

Mike, I have my fingers crossed that the kit will do the job. Good luck.
Top

Thanks Jim(s). I'm still waiting to get a day free to overhaul the pump. Our family has been suffering from "The Lurgy". Wife and youngest had it last week, Myself and daughter are still recovering.

I grabbed a cruise control stalk of ebay last week for 25 notes. I was expecting to find out I might need another brake switch. Plugged it in and configured the BSI and engine ECU.

Long story short: Peugeot's of that era have a spare plug and space to fit a separate switch on the brake pedal. Xsara's need a different loom?
The engine ECU and BSI is happy with the cruise control stalk, I just need to do a bit of wiring.
Top

Cruise control still not working. All it needs is a signal to the engine ECU from a 'redundant' brake switch. As there is no room to mount a separate brake switch, and I don't want to butcher the wiring to the existing switch by changing it for the later two gang switch, and I also don't want to bodge in a home made 'limit switch', I guess I'll have to make do without.

Had a call from my Mother on Sunday who also has an 02 reg Xsara saying the blower is always running at max speed. My car had the blower changed under warranty (6 months old!), and I've changed the transistors twice since. I ordered 6 more MJ1105g's from Rapid Electronics Sunday PM which arrived today (£2.80 each + delivery so £20 delivered for 6) Advertised as Fairchild but arrived as ON Semi. (no problem with that. I hadn't seen the 'g suffix before but it just means it's lead free)

Tomorrow lunch hour I'll extract the fan and then after work will mend it and refit it.
Top

You'll love cruise when it is working Mike....

That's a lot of transistors to consume Mike but an excellent deal on the MJ11015.. Think I may get some from there for stock...
Top

Wow, I didn't think it was April when I last visited this thread. I have been reading all the other blogs though. (Sorry, I'm a lurker rather than a poster)

The Xsara hasn't missed a beat since the HP pump transplant and the pulley change. Time for a service though, I always just do it late summer regardless of mileage (it's 10 year old with 85,000 miles - Service interval should be every 12,500) Summer seems to be running out though.

I've been using the other half's Peugeot 807 for the last month since it lost 3rd gear. My wife does more miles in town and on rural roads than me so we have swapped cars. The 807 (or C8 in Citroen language) was invaluable when it was decided the little ones needed a huge double pram/pushchair travel system thing, but now they are aged 2 and 4 they can get away with just a small buggy in the boot in case the little one's legs give out.

I only live about 5 miles from work on good roads but there is no bus and I start work at 7:30 so it's a bit hard getting everyone up and about to drop me off, hence the need for 2 cars.

I still need to fix the gearbox on the 807. Initially I thought drop the box on a Friday, strip it, fix it, back together by Tuesday (on a bank holiday weekend) but then I thought it might be wise to get a reconditioned gearbox, swap it and fix the broken one after. Changing the gearbox isn't a problem, all you have to do is 'drop the subframe out the way'. Hmm, easy to some but I'll have to research that.

Then my patents announced they are off to their holiday home late September for an extended 2 month stay, and as they are always happy for me to use their car (another Xsara) plan A is back on, take the 807 off the road, fix it and put it back together.