Make sure you get the later C5 waterpump and tensioner for the cambelt. It's a lot easier...
Top

Another afternoon spent on the car Friday...

Eventually got the bottom engine mount replaced for another one.

What a PIG to do... Firstly I was convinced it was a no go as the half shaft was solid in the bearing house! No amount of strikeing was going to move it... so just on giving up, I decided ah! HEAT

As the mount is alloy it will expand quicker then a steal bearing.

A nice Tip from Citrojim was the hocky stick bolts was the top one was accesable from through the wheel arch, the lower from underneath...

So to follow must have been about 20 moves from underneath to the wheel arch and back again!! 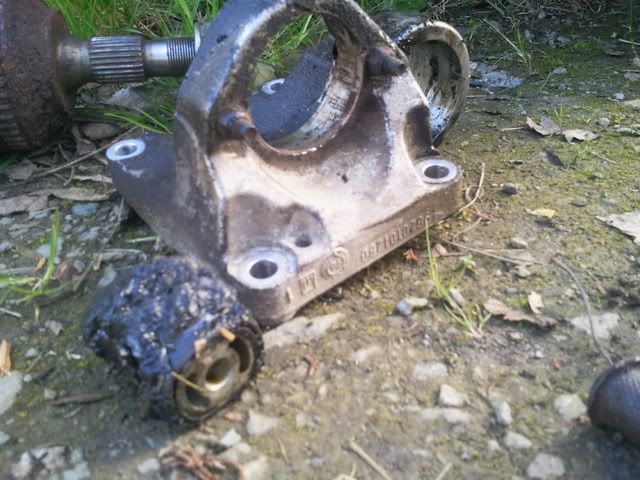 Anyway... a bit of heat, a light strike and POP the half shaft popped out like it was in nice and loose!

Theres 4 16mm nuts holding the mount on the engine, but then the next bit of fun cropped up... The link mount bolted to the subframe is bolted the same as a HDi and that horizontally bolted. NOT vertically like the XUD.. so, of course, the bolt goes through from the engine side... 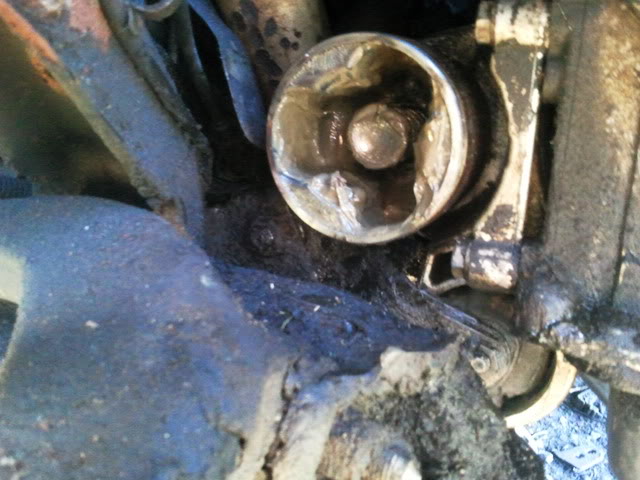 Ok, no problem but oh no! The Rear Bank Exhaust loop is in the way!!

So to follow, lots and lots of engine lifting and lowering trying to fiddle the bloody thing in.. The exhaust does come close to the mount, but theres enough clearence to get it off..

After some messing around I eventually got the two parts lined up and bolted up, though loosely... The mount bolted to the block is tight, but the link mount is not till the top mount is on...

That was the hardest thing.. and its done..thank god.

Of course, upon removing the outer drive shaft, I was presented with this CV joint ABS ring.. 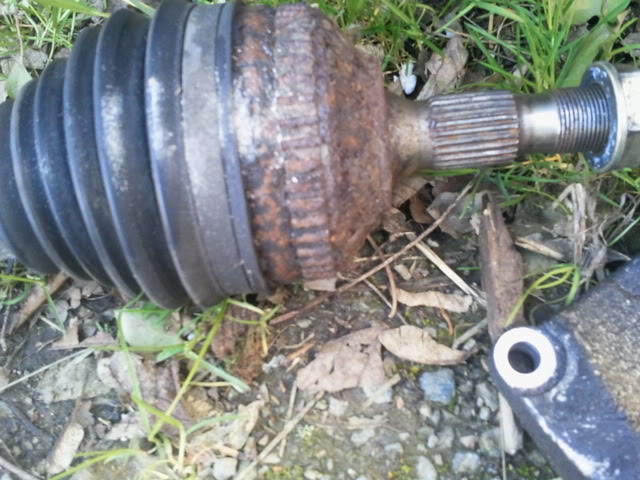 Its virtually rusted away.. so not sure what to do.. May try some TD CV joints with better ABS rings.

So thats my latest so far.

Got a bit more today, but not had my phone for pictures with me

Anyway, I decided that with the lack of milage Ill probably do, and at the moment lack of funds I decided to use the same tensioner on the belt..

I spoke to a local Pug dealer technician yesterday and he gave me some good advice for setting the belt.. So I have fitted the Cam belt and new water pump.. got the covers all back on, engine mount back on and drivers drive shaft all back in. Also got the Aux belt back on, ECU's back in place and very pleased to report she started up first turn of the key YAY....

Sounded as quiet as ever.. so pleased with my progress today.

Re fit Air con seals, air con rads, and water rads next.. then passenger ABS sensor, and passenger door mirror... and get the front bumper sprayed too.

Did a bit more last night, refitted the Rad and filled with water ...

However, in other areas Im beginning to get dis heartend, as the Tin worm is getting worse and rearing its ugly presence in more areas then I would like!

Im already aware of a fair few of the Factory welded seams in the engine bay starting to go, and also over on the rear wheel passenger arch in the "Normal" way..

The rear cill tops inside the back doors are also bad! and last night I was drawn to the rear drivers wheel arch is rather bad, but after a knock or two with my hand piles of dry mud kept pouring out from behind the plastic liner.. Oh the joys.. Shes beginning to look like a "Bad" one ..

I guess I could cut sections out from other cars and put them in, but there could still be enough metal to rub down and paint.. I need to look closer.. so shall need to remove the liners and get cleaning up..

Poor ole girl, looks like shes been driven in fields and the mud left to fester..

So not feeling to "Joyful" over her at the moment..

Don't be disheartened Paul, She's still worth doing and will come good

I winder if, in the future, you get hold of a good base model and think of doing a reshell?
Top

Hmmmmmm got the car all up and running and back on all four wheels ... HOWEVER, Ive noticed that the gearbox now does NOT bang loudly into reverse!

She takes up reverse nice and lightly.. before I took the belt off she used to bang badly into reverse... I was quite concerned..

But I can now report she does not do it half as much!

Paul, that's interesting and bears out my findings to an extent

My MK1 would bang badly (as you know) and bang into Park as well. I found the idle speed was being kept a but high by a fouling cruise control, bellows. After sorting that out, things have been much better..

Also, replacing the crank pulley silenced some horrible noise when the aircon was on...

Great news she's back on her wheels and driving

I had a go at air con regas... But found the condenser had a leak... So took it out and popped in another of the few around. Did a re vac and re fill of gas. It worked and was quite cold.. Shes been left 2 days now when i go over tomorrow and find out if shes held the gas... If so then its headlights in.. And then just the bumper... If i cannot get it sprayed intime ill fit the old one with damage reluctlently....

Have you got aircon regassing kit then Paul?
Top

Yup.. Ive got some old guages that just wirk. Could do with new ones.. A proper vac pump. Pipe work and an r134 quick release adapter for regas and vac out. And a 12kg bottle of r134

Ok.. got some more done today... removed drivers rear caliper as it was corroding out... clean it up, greased and refitted, only then to slipt a tiny hole in the caliper feed pipe....

And of course for those who dont know the Rear brake K split juction is of course on the passenger side of the rear subframe above the back box.. standard setup ALL models..

So luckilly with a couple of rear subframes in the shed I had a good pipe on one, so swapped that over, bled through and all sorted..

From what I can see under neath shes MOT ready, subject to a 4th tyre and a rear ABS sensor to put the light out.. rear drivers one according to Lexia.

Anyway, fitted some alloys too with 3 good tyres..

I think they suit actually...

It appears the Air Con has held the gas too YAY...

Just need to spray the bumper I have and fit passenger door mirror to see if I can get the auto dip working again.. IIRC the current door mirror is a standard electric one as the original one was - um - absent.

Hmm, 2.2HDi C5 alloy wheels, how do they get on with the Xantias arches having 205.65.15 tyres? Certainly up the gearing somewhat!

Im so tempted to put the spare set of C5 steels wheels I have on the Activa, to see how it drives with bigger and slightly lower profile tyres. Though they are 215.55.16. Not to worry, I dont want to get rid of the genuine wheels on it.

They dont seem that bad actually. I had the car on TOP setting and I think they still just clear the leading edge of the rear arche's....

I think they look good on her..

Ooooo above I mentioned rear arch rust, I looked at that today, and its not too bad on the inner side... the rust seems to be on the outer skin of the rear arch..

Might be a little tight on lock, but I agree, the style of those wheels does suit the Xantia. There are the other C5 SX wheels which I think would look smart on too.

Is the rust in the usual door gap arch place of the Xantias? Or around the arch itself?
Top
Messages: 82