Hi everyone, I'm a new member but a long-time lurker

I've been given a non-running 307 HDI 2.0 with a siemens ECU, I've got the feeling a few people have tried to fix it as has a few new sensors and the BSM was not clipped down properly. Scanning with PP2000 it has a number of faults, but the one I really want to start with it reads an incorrect battery voltage, by around 2.5 volts, even with a charger on the battery it will read a low voltage of about 12.0 volts. So the car goes into economy mode and PP2000 will not communicate with the BSI. Normally with a battery voltage of 12.8 volts, PP2000 will read around 10 volts. I can't get any live data with the engine cranking, which is typical of many of the pugs I've checked in the past when the car is in economy mode, The immobiliser data says it working correctly and is not locked.
Ive removed the BSI, and BSM checked for dry joints and checked all plugs, grounds and fuses for corrosion.
Here is all the data I could find on PP2000 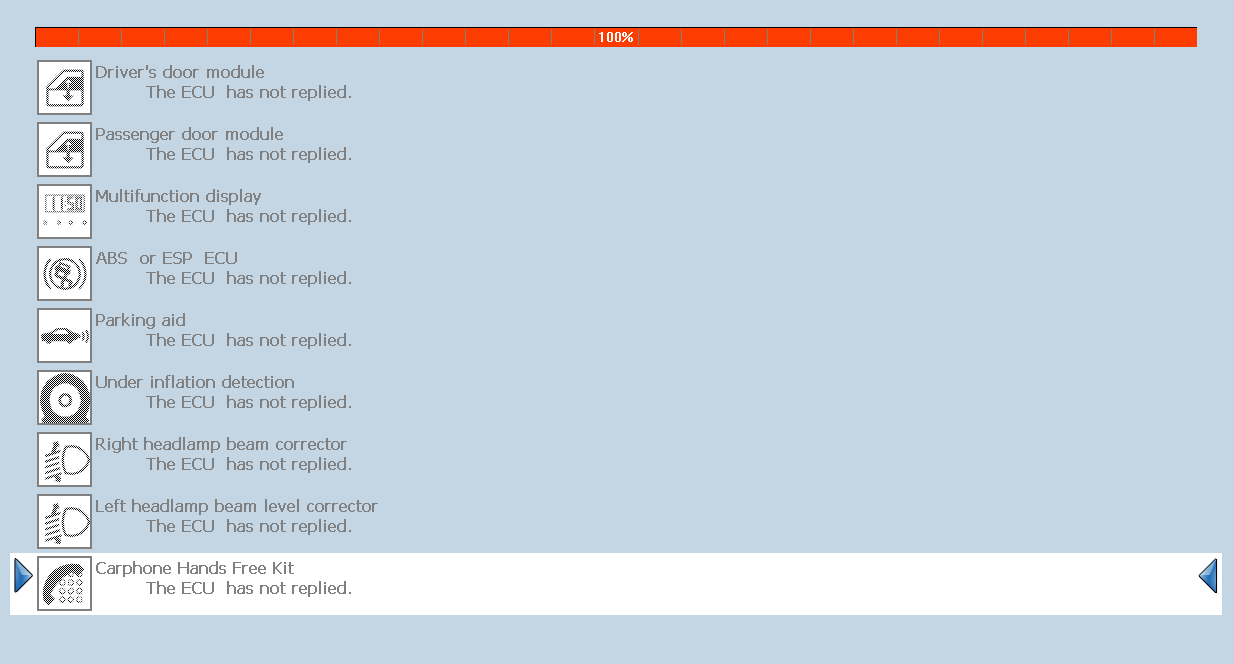 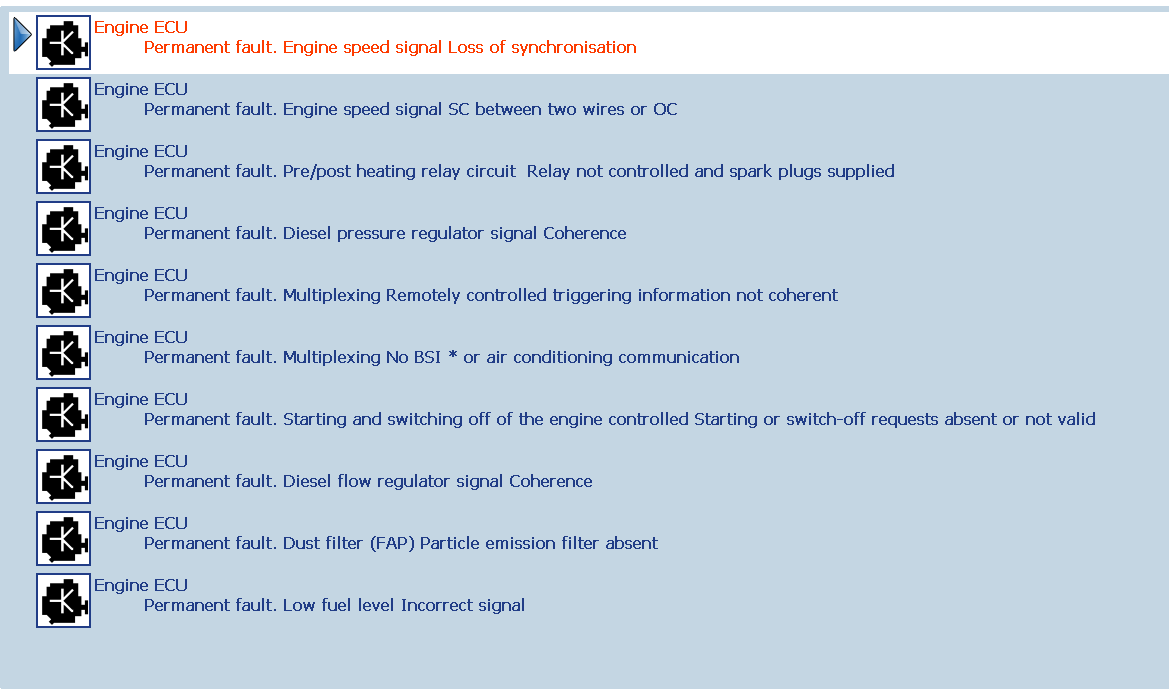 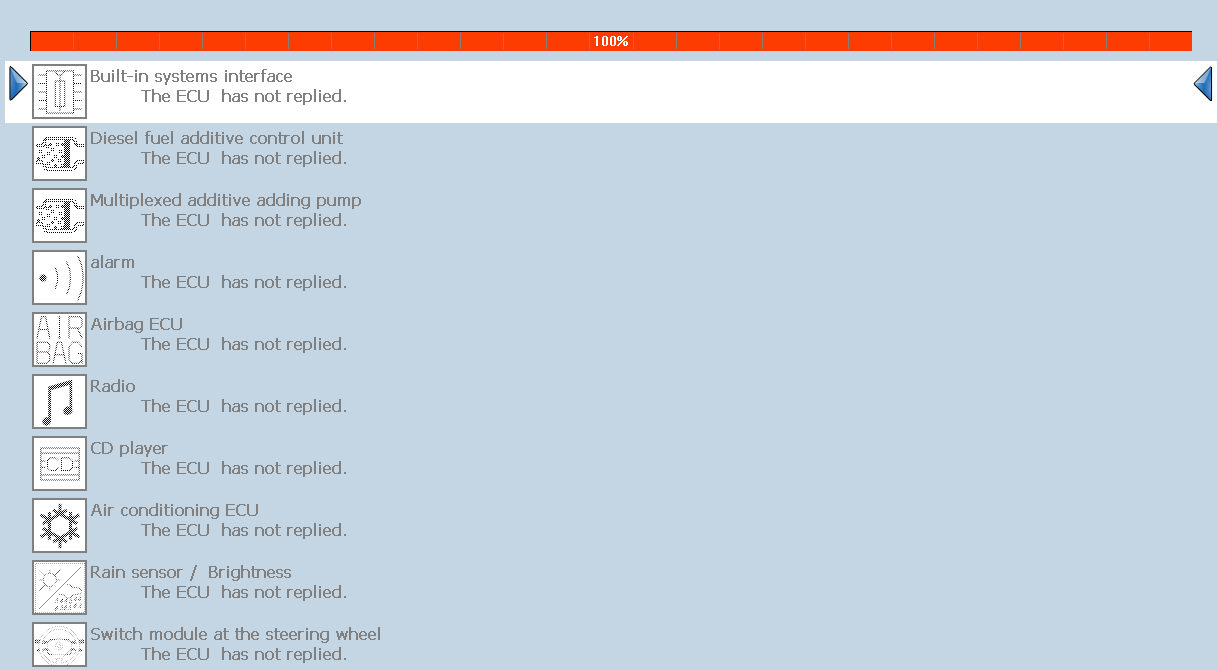 You have a right mixture there.

You won't get very far without a full diagnostic. It seems that there is no communication with a lot of ECUs and initially, that would tell me you may not have a full-chip VCI. If it's an older revision this can typically result in non communication of many ECUs, so that would be my first thoughts. Without that being sorted out, it will be hard to determine what the other faults are - as in whether there are other faults and you interface just can communicate with them or whether there are data network issues.

If there are CAN network issues then the ECUs won't be able to communicate - but these would typically be shown up as a lot of fault codes with 'UXXXX'. The fact that I can't see any of these recorded also suggests an older interface.

Without knowing, possible other faults won't be returned, so the picture is incomplete.

Of course, the battery is either end of service life / not charging or the charging circuit wiring / alternator may have issues if it's not providing enough juice.
Top

Thanks for the comment, The battery is the first thing I replaced even with the charger connected, PP2000 still reads a low voltage. Does anyone know where I can find a wiring diagram? There is a fuse (f11) on the BSM that reads the same voltage as PP2000 and also the PP1 connector has 2 large wires to the BSM one of the wires has the same voltage.
Top

The vehicle does not start, I'm thinking it is the BSM engine fuse box problem. I don't leave the battery connected while I'm not working on it so I haven't tested if it's got a parasitic load. If I could get a BSM wiring diagram that would help, Im looking at the f11 fuse and main relay area.
Top

I managed to buy a wiring diagram and found that the BSM (engine fuse box) is definitely got issues. Not the easiest thing to repair or find a replacement in Australia, I'll get everyone posted when I get that fixed as I'm sure that is not the only problem.
Top

Watching for the results, ive the 307sw 2.0hdi.
Is the immobiliser receiver ok
Top

it looks ok check out the last screenshot.
Top

Ok just an update, I striped the BSM down as far as possible pulled off the back PCB and checked all the copper tracks, and relays found not much. All looks to be in good order. I did discover the factory Pug however BSM wiring diagram is incorrect, which is why I pulled it apart in the first place.
I will resolder everything just to be sure, and reassemble. I found that fuse 11 in the BSM is NOT connected to the main power feed as shown in the diagram. So the weird voltage I was getting was coming in from somewhere else.
There is a ground point below the left front door under the carpet, which is connected to the BSI and a number of other systems heater, AC etc. I found one of the crimp on connectors with 2 heavy wires quite green and corroded so I've replaced the connector with a couple of ring terminals. Now I've got the manual it makes it much easier to find these earth points.
There is another earthing point under the left headlight that grounds the BSM so I will look at that tomorrow, and put it all back together and run PP2000 on to check if that low voltage fault is still present.
Top

Low voltage fault still present, I'm just going around the car finding all the earth points and checking and cleaning them. The one under the headlight is very difficult to get to, there is another one in front of the gear stick on the left side. Any ideas? anyone?
Top

Is it possible that the ignition switch is faulty? On the wiring diagram I have, there are 3 wires that go to the BSI from the ignition switch, one supplies power to the ignition switch. The other 2 are start and run signals. The Start wire also goes to the BSM. The power supply seems good at 12.7 volts. Also the "run wire" back to the BSI has 12.7 volts. The start signal wire to the BSI however is giving me some very low voltage readings, even though the starter is behaving normally. the error in the screenshot starting switch-off requests not vailed may have something to do with it. I'm just asking as I read somewhere that a 407 would not start on the starter motor but would bump start easily. It also had a long list of errors.
Top

Just as part of testing gave it a sniff of areo start, it will run on the gas for a few seconds, so no mechanical fault, Also tried wire direct to starter motor still the same symptom turns over but will not fire.
Top

Can you talk to the Engine ECU and clear those faults? Do they then come back? Can you see live data when cranking it? Are you getting full battery voltage at all the power pins on the ECU? Good earth from the ECU? The HDi will not start injecting fuel unless it sees: cam / crank synchronisation; engine rotating; fuel rail pressure above 300 bar. Often if it cranks too slowly then it is hard to start, but if it ran on easy start, but didn't start injecting diesel, then something is wrong with the ECU or its signal inputs.
Top

I've not tried to clear the faults, but I can do that if you think it will help, I can't see live data when cranking PP2000 losses communication, that was the first thing I tried, Power at all the BSI and BSM pin are normal and all earths have been removed and cleaned. I've looked at of the power and grounds on the BSI and BSM, there is a weird voltage on fuse 11 of the BSM which is the same reading on PP2000 Not checked the engine ECU power and grounds. that's next on my list. Do you know where PP2000 gets its voltage data from?
Also there is a relay test on PP2000, I can not hear the power relay, and I don't know where it is located.
Thanks, for the reply, as I'm starting to run out of motivation..
Top
Messages: 26