Got this in an email from Confused.

Most important question Gibbo...where's the Zoe

Not a bad coverage in your Confused Link.


NewcastleFalcon wrote: ↑
21 Jun 2021, 10:56
Flurry of news stories about mandatory safety features required to be present in cars sold in Europe when they were approved back in 2019. They begin to take effect from May 2022.


The rules apply to
All new models put into production from May 2022.(Existing models in production do not have to comply)
All new cars sold in Europe from 2024 (regardless of whether that model was in production before 2022).

The Intelligent Speed Assistance bit will apparently be capable of being switched off, the black box....not.

Yes, the infamous speed limiters: technology that can read limits and automatically slow the car down as appropriate. Yes, they will come to the UK, and no, they won’t be hard limiters. You’ll be able to switch the system off but as a default it will be automatically on every time you start the vehicle. You can override the limiter with a hard press of the accelerator. At least at first. More strict applications could follow in the future. 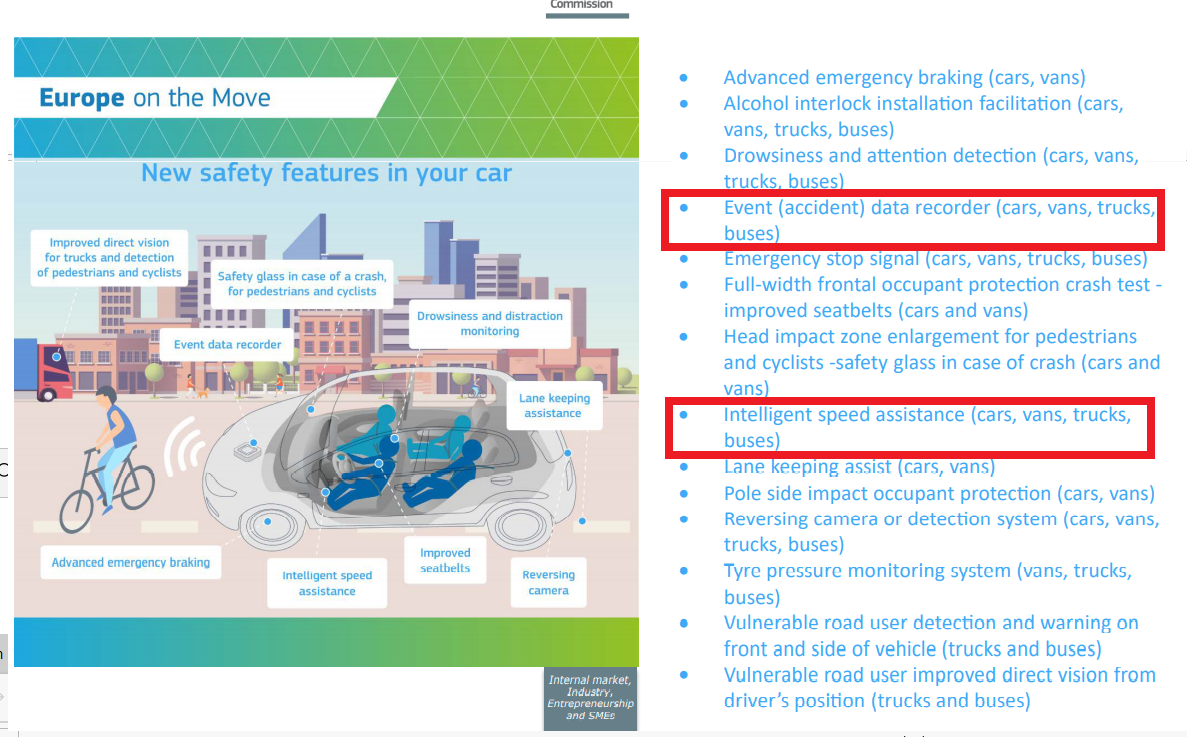 I already have this partially implemented on my Aircross - but at present, speed limits and speed signs are detected automatically, and I have to confirm with a push of the cruise button to confirm and set the recommendation where the speed then matches . So as speed signs change, it throws up the limit on the head up display constantly. But - I have to confirm whether I want to change to the recommend maximum speed limit or not.

At present it is entirely my choice, but little else is needed to make this mandatory technology-wise and that is where I have mixed feelings.

I agree regarding the overtaking issue - there are occasions where you will need power to overtake at short notice and the last thing you want is hesitation or a refusal from the engine to comply. I hear what they say about temporary override - but I'm not sure this will work in reality as it will mean a heavy kickdown to engage I suspect.

Another casual observation from my own experience: The article is correct in that like my vehicle the system uses a video camera to detect the signs, but also relies on GPS data for the system to work hand in hand. Therein lies the problem.

I have a 60 MPH stretch of road, that approaching a residential area changes to 40 MPH and 100 yards later changes to 30 MPH. All good so far, and the system gets it correct. BUT, after 20 or 30 yards into the 30, the speed recognition changes back to 40 MPH - yet the zone is still 30 MPH. There are no signs to go back to 40 MPH until you pass the residential, and then after the 40 MPH it goes back to 60 MPH again. In the residential stretch there are large street light posts regularly spaced so I know from my last speed awareness course (ahemm...

) that this is also a way to determine a 30 MPH zone if you miss the speed sign.

So the system is not infallible and although I have reported the issue to Tom Tom who supply the mapping data and provided the coordinates, nothing has been done!

For me personally, I actually do use the system all the time - as in the HUD I have a constant reminder of the limit and the speed signs go red when you are over the limit - so it is a good measure. But I'm not totally convinced fully over the other potential issues - yet....

All I will say is that boy racers doing 70 in 30 zones as happened near us lately - watch out your time is coming to an end.

Zoe is still in the mist Neil.

Thanks Gibbo us nosey folk like to keep up to date.

If you want to reserve starting a new thread till its on your drive, you can use the "Used Renault Zoe-Can a case be made to buy one thread", to record the trials and tribulations of your purchase