I'm new to this forum so apologies in advance if I mess up on forum etiquette.

I'm looking to replace the temp sensor in a 2010 DS3, 1.6 VTi. I've seen a few vids and it looked quite straight forward. However when I've looked under the bonnet, the temperature sensor isn't visible and looks to be encased in a housing.

Is this something specific to the DS3 and how easy is it to get into the housing, if indeed that is where the sensor is to be found?

Thanks in advance for any advice.

That looks like on e of the Prince engine variants. The temperature sensor is in the thermostat housing and is (probably) not a separate part.

There are several different versions for different variants of that engine, some have 2 temperature sensors and some have only one.

Here are photos of 2 variants: 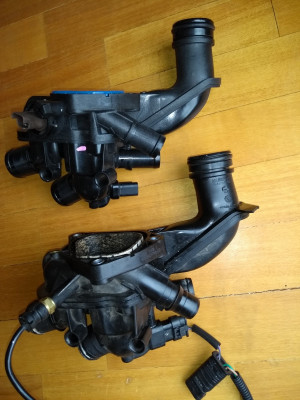 I think that yours may be similar to the lower one in the photo, but without the extra cable and temperature sensor which is screwed into the bleed hole. In this case, the temperature sensor (and heating element) are inside the plastic body where the cable is plugged in at the right hand side.

The upper thermostat is the picture is the other main type which has separate temperature sensor at the top left, held in with a clip, but this sensor is not officially available as a separate part or replaceable (but is available from sources in China).

If your sensor is faulty, you have to replace the whole part, which is a fiddly job. Be very careful to buy the correct one for your car as there are at least 6 incompatible variants, which to some suppliers look all the same.
Top

Many thanks for your reply.

If I've got the orientation right, I think I'd expect to see the sensor or the sensor with the extra cable in the circled area.

I've just had a good look and there's neither on this housing.

Is there a 3rd type of thermostat housing?

I think I've just found it, this is the housing on my car.

I'm not that technical, but I've seen a post relating to a DS5 that mentions this type of housing and an "integrated engine coolant temperature sensor and bleed screw"
I guess this is the 3rd type??