Any help would be appreciated.

That looks different to mine

Is there an owners manual with the car? You can't really do much harm messing around with the display anyway usually they are intuitive once you start playing with them
Top

And you have reminded me that I have to reset the time in mine. One day.
Top

This springs to mind! 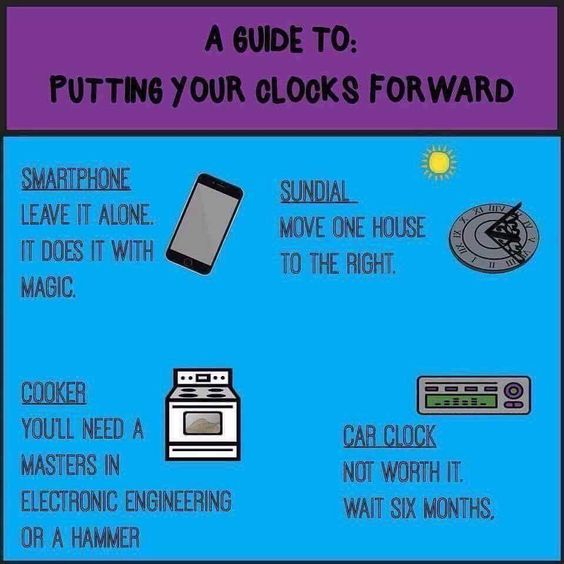 The one in my company van does it automatically, via the GPS system.
Top

But that option can also cause GPS location and calculation errors on some Sat Nav units due to the ‘N’ Week rollover issue. Disabling that option resolves the navigation issues. It depends on year and model of Sat Nav.
Top

Got up Sunday morning, had to pick my daughter up. Buggered around for a bit and checked my phone, damn, hasn't updated

Except it had and it was the clock that hadn't, placed it too close to the speaker that interfered with it. So only an hour early.

Cooker clock has lost so many pixels it only shows a vague interpretation of the time, been using Alexa as an oven timer.
Don't get enough sun to justify a sundial.

Bought this car August 1st (actually the day before but don't tell anyone). Took ages and the handbook to set the clock and it's about the only thing I can work in the car. All the rest is push buttons and see what happens, then forget immediately.

The C5 was simple as I had been doing it for about twelve years, usually December and June.

Rarely look at the clock in this car.
A) I don't usually care what time it is and
B) there's loads of other stuff on the display and I'm trying to pick the track I want from the three million on the USB dongle.
Will do it one day. Mid March probably.
Top
Messages: 18