Price of scrap/abandoned cars... What have you seen?

Price of scrap/abandoned cars... What have you seen?

OK this bit of the forum is traditionally NF's stomping ground

but I've got a little contribution to make so here it is...

The price of scrap metal is seemingly pretty low at the moment (called a few guys but only one was interested in taking the shell of the GTi we broke, no suspension/gearbox/exhaust or seats. we got £30) and this seems to be borne out by the lack of the usual rag & bone fellas picking up folks rubbish round here too. Of course Corona likely has a hand in things too.

This would explain the increase in abandoned cars we've encountered lately then. not used to seeing this sort of thing since the early 2000's but there's been 3 or 4 we've noticed just left where they dropped (proven by no MoT/tax etc also). Most significantly is a '52 plate B5 Passat 1.9 PD saloon which appeared on the land next to our house a couple of weeks ago, this thing was left with the door wide open & key sat on the driver's floor!

I went to investigate the thing & on running the plates it's failed it's MoT early March, for a rusty front subframe & handbrake cable. Battery was stone dead so I just locked the doors manually to stop kids burning it hopefully & left a note on the seat stating that if you'd forgotten your keys then knock on our house & describe the other item I found inside and the key fob and you could have it back. (If people want to chance driving round with nothing on the car these days, I say go for it and see how far you get, & nobody likes a grass!!!)

Anyhow, a few weeks down the line & nothing. Nobody locally has said anything, guess they just assumed it was one of ours anyway! I went out the other day to look it over a bit closer as it showed only 110k on the failed test & overall didn't look horrible, in fact very tidy apart from the front wings being crunchy. Had a good root round to see if there was any paperwork to identify an owner but nothing with a name/address on it, looked from the paper on the floor it'd just been driven straight from the MoT and dumped!

What I did find though, was the book pack stowed in it's holder. Looking through that, there's the radio code, fully stamped service history up to 2016 but anything relating to the owner either removed or torn out. The more I look over it the more signs it's been looked after at any cost up till a couple of years ago, presumably it hit 100k and became "just an old banger"? Either way, it's seeming to me like it's been abandoned, but in a "conscientious" manner, keys left with it and outside a house where we're blatantly obviously into cars... On that basis, I took it upon myself to give it a jump and see what it did. It fired up willingly and ran quietly and smoothly, even ran it back and forward a few yards and it seems sound, left it running while I jacked it up to check out the rot and it got up to temp, no overheating and the AC even worked after a fashion! The rot it failed on (nearside and offside Front subframe corroded, severely weakened *DANGEROUS*) is not even that terrible, a hole about the size of my thumb on the left side near the bottom wishbone mount & the same but a little bigger on the driver's side. It's a bit crusty and thin under there but that's the only serious part & not even a day's worth of welding, heck it's not even overhead welding it's on the easy side!!!

Upshot of all this is, I've determined that it's well worth chancing the £25 quid to apply for the documents & have done this yesterday. Hoping to hear good news soon. If it comes off, the car is well worth saving IMO and would even make a good replacement for our Volvo which has proven too big for us and not doing the mileage it deserves to keep it fit. Time will tell, very strange though. all I can think is somebody had seen that we're into cars and rather than scrap it or pay to fix it they decided to give it a chance with us?

Just wish they'd said something rather than just leave it, I'd have happily signed over a free project lol.


Sooo, long and short of it is, I'm wondering what abandoned cars/weirdness around them others have experienced lately, with people seemingly not wanting to take stuff to the scrappy for now...
Top

I have this vision of word getting around and various cars being left on your doorstep with 'Please look after me' notes pinned to them. You'll be getting a reputation as a home for abandonned and unwanted cars. We'll be seeing the TV ads soon: "Just donate £5 a month and we can look after all these unloved cars. We'll send you regular updates on their wellbeing and let you know if we rehome them"

but I've got a little contribution to make so here it is...

The more thread starters we have the better. Always good to have something new to view when logging onto the FCF.

My last vehicle to go to the scrapyard I gave away. From time to time if I'm passing I check in on this one. Its been lying in the same position for years now. Probably in the saveable category seeing as it is a Vanden Plas, but the mice had taken up residence so the Vanden Plas interior ain't that pristine. 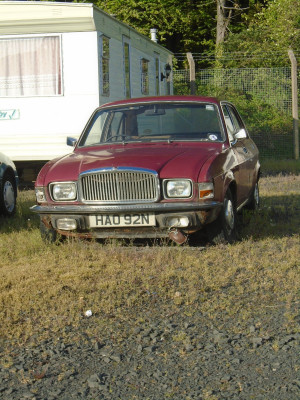 We had some dodgy scrote drive into work yesterday to have a scope of the place. We checked the car reg and it was SORN'd and no MOT. It appears they just keep driving the abandonned cars around here

Getting the V5 is not proof of ownership so don't spend too much money on it because once it's up and running the guy who 'lost it' will be around to collect it.

Not spending much, just the handbrake cable & a bit of electric for the welder. Already got plate lying about for the patches. Only other concession I might make is a lock set in the event the guy might try something (hence not spending big bucks) but if he does call to collect his lost property I'm sure the police would like to know how it got there in the first place with nothing on it for a month &/or why it wasn't reported TWOC at the time...

Also I'm not really that good at looking after keys, terrible at losing the damn things.


That Agro is a strange one to see sitting about, would think there'd be a masochist for each and every one!
Top

bobins wrote: ↑
05 Jun 2020, 18:56
We had some dodgy scrote drive into work yesterday to have a scope of the place. We checked the car reg and it was SORN'd and no MOT. It appears they just keep driving the abandonned cars around here

Same with the ones here, they only tend to get left when they drop of something terminal but at least your man had the wits to SORN the thing, this one is just plain untaxed... Guess I could claim ownership of the car as payment for saving the registered keeper from a fine, and to cover their storage costs on our land too

bobins wrote: ↑
05 Jun 2020, 18:47
I have this vision of word getting around and various cars being left on your doorstep with 'Please look after me' notes pinned to them. You'll be getting a reputation as a home for abandonned and unwanted cars. We'll be seeing the TV ads soon: "Just donate £5 a month and we can look after all these unloved cars. We'll send you regular updates on their wellbeing and let you know if we rehome them"

All the breakers and scrapyards here in Ireland are shut due to the virus, old cars can be got for a pittance or for free. Some guys are stockpiling them because this lockdown will end and the Chinese will want steel. The price of scrap her is €15 (£12) a ton, not a lot really.
Top

Indeed, glad we held off on doing the welding as the very same happened today!!! Now, hindsight is 20/20 and all that, but really what we should have done was record the fact the car appeared to the police before anything else. Not sure how much truth there was in the story we got as is sounded iffy, but long & short of it is the guy proved ownership (to the point where I'm happy he was the keeper at least) by way of having the V5 and a spare key with him.

obviously can't have been & we both knew that. Not sure exactly what's gone on, but car is back with him now and lesson learned for both parties hopefully. Him, not to leave unroadworthy cars laying around untaxed & open, with the key there and us, to look a "gift horse" in the mouth no matter how clear cut things may seem regarding it being abandoned...
Top

The 'normal' reason for someone claiming their car has been 'stolen' is if they've potentially committed an offence in it (hit 'n' run, tripped a Gatso, etc) but they haven't actually been stopped for the potential offence. The argument to the police goes: 'It couldn't have been me guv, as the car had been stolen"
Top
Messages: 11 • Page 1 of 1