I was driving it fine xmas eve then during an automatic gear change from 3rd to 4th it jolted and went back to 3rd, it then started revving higher than normal, I pulled over to check on things and saw nothing out of the ordinary, dash showed 0 lights and system check shows no errors.

I then restarted the car but could not get above 10 mph. I got it towed back to my local garage but they have yet to look at it.

I purchased the car 14 months ago and it came with an Auto Protect Silver+ warranty which covers upto £500.

What could be wrong with it? I don't thrash it about and as it's used to drive the daughter to school it's rather vital. Any idea what kind of costs I'm looking at?

I can provide the reg number, but not the VIN number as I don't have access to the vehicle.

Real annoying time of year for this to happen

Look forward to any and all help and also many thanks in advance.

Hi Adam, welcome to the Forum.

Yes, please copy your registration here or send it via a private message, and I'll be able to determine exactly what system you have. I suspect you have a piloted manual gearbox (hydraulically assisted gear and clutch changes - but still a manual box with clutch as opposed to a proper fully automatic with torque converter).

We'll know for sure once we have this.
Top

Ok, so confirmed you have a C4 PICASSO ESTATE - LEISURE 1.6 HDI 115 (DV6C) piloted manual gearbox 6 (With stop and start). So this has the system I described in my last post.

Best thing you can do is get it back to a dealer who can diagnose the problems ad these systems are very complicated when they go wrong. It could be anything from needing to bite point to be reinitialised, or the clutch slipping or any one of a hundred other issues with the hydraulic actuators.

If you have a warranty on it - I would get it back to them to deal with - but they are expensive to repair to be prepared. May be a simple fix - may not be - we would need to have a fault code to give you an idea.
Top

Sadly getting it to a dealership is not viable, the nearest being 12 miles away and the car just sits there doing nothing but revving. The garage I use are looking into it tomorrow. I've had clutches go on me before and it's never sudden and never in the first 6 years or at 66k miles.

This is the third thing to go wrong on this car in the 14 months I've had it.

I will be going back to Fords after this. I only went for the Citroen as it seemed a good car for a family.
Top

They are generally very good - but most here would agree the EGS systems are a nightmare when they go wrong - and advise a proper manual, or a fully auto.

Sorry to hear this, as it sounds like it is now immobilised. Dare I ask if you have homestart cover? If so they should tow it to your garage (as they won't be able to repair it). I would then consult with your warranty company and tell them it will not move - and that it obviously needs specialist attention. They will obviously await an assessor's report before authorising repairs. The only issue is going to be that Citroen will have to diagnose it first to be able to give you a quote for repairs.

So just to confirm, it is now starting but will not go into any gear? - or if it does, that it doesn't move?
Top

The car was towed to a garage on Xmas Eve, a nice gent in a recovery truck saw us from his house and came to our rescue, I got him to drop it off at the garage so I could contact them when they was next open (friday 27th).

The garage do deal with the warranty people and are listed on my documents.

The car starts, it will go into either first gear or reverse gear, you press the gas pedal and it revs but doesn't bite at all.

When it happened there was a burning smell so I shut the engine of asap.

All fluids in the vehicle are within their max and minimum ranges.

The oil did seem to get very hot.

It was like it juddered when changing gear then the clutch failed with no bite or movement. I managed to walk it to a lay by and park it up, then the recovery truck appeared as if an xmas miracle.

Within 4 weeks of owning the car we had a heavy downpour and flooded the drivers side, the blower was broken. It cos me £625 getting it repaired because it was due to water ingress the warranty people wouldn't fix it. Then only 3 weeks after that both driver and front passenger windows failed, would make a grinding noise but not move, been told it's the regulator but again not covered under the warranty, I had saved up the £320 to fix it after xmas but now this has happened . I still have 4 years of finance on the vehicle and really at my wits end.

I have since spoke to the garage 3 times asking for an update but they haven't been able to get to it yet.

Also I thought my insurance had breakdown cover, but it's actually recovery after an accident.

So that's my current position.

Definitely sounds like the clutch is worn or not making contact or the DMF is shot. I'm not sure that re-programming the clutch biting point will help at this stage - let's see what happens when the garage are open - but if they can supply you with any and all fault codes, that might help us from this end.
Top

Thanks Marc, it's much appreciated!
Top

Chalkie wrote: ↑
31 Dec 2019, 16:57
Also I thought my insurance had breakdown cover, but it's actually recovery after an accident.

So that's my current position.

Do a search for breakdown/recovery firms in your area.

Some will act as contractors to the insured packaged services, but you could offer to pay direct.
Top

Unless the garage is a Citroen specialist or dealer, then they are unlikely to be able to change the clutch on this successfully.... It needs Diagbox and some knowledge of what you are doing.
Top

RichardW wrote: ↑
01 Jan 2020, 20:48
Unless the garage is a Citroen specialist or dealer, then they are unlikely to be able to change the clutch on this successfully.... It needs Diagbox and some knowledge of what you are doing.

"The business, which has the latest Auto Logic diagnostic systems for Citroen, Peugeot and Renault, can perform a range of tasks to main-dealer-level on all vehicles made by all three manufacturers."

They told me they are authorized to do clutches and such so fingers crossed.

The garage has taken a look, there was an oil leak from a seal which has leaked into the clutch and made it fail.

The warranty company are saying that is due to an external ingress and not covered under the warranty.

Gonna be £1500 including parts and labour to fix.

I am challenging the warranty company as it's still an internal leak which caused the issue.

I have a Citroen C5 X7 that originally had a new DMF and clutch fitted at my expense (wear & tear service item) - however, not long after, I had clutch slip again.

I took it to my dealer (as I had extended Citroen Warranty), and on investigation the crankcase oil seal had failed, allowing oil to contaminate the clutch. So I suspect this is what has happened to you.

As far as the warranty went - I stood my ground, because although the clutch is a serviceable part - it was the failure of the crankcase seal (that was not classified as a service item) that caused the damage. And as I had evidence that the clutch and DMF was just replaced about 12k miles - it was agreed that the warranty company would replace the clutch, and crankcase seal and pay all the labour and I just paid for a new clutch. I was happy with that outcome (cost to me about £150 at the time) - so do stand your ground. Maybe you can come to some arrangement like that.

A lot of this will come down to the warranty company and of course, they will do anything to squirm out of coughing up. I have to say though, that the Citroen Extended warranty company was impeccable and honoured every claim no grief. In fact it was my dealer who said a suspension pipe wouldn't be covered - but after I spoke directly to the warranty company - they couldn't understand the refusal and told the dealer to do it!
Top

Here is the invoice, amazingly the car feels better driving it now that when I first purchased the car. 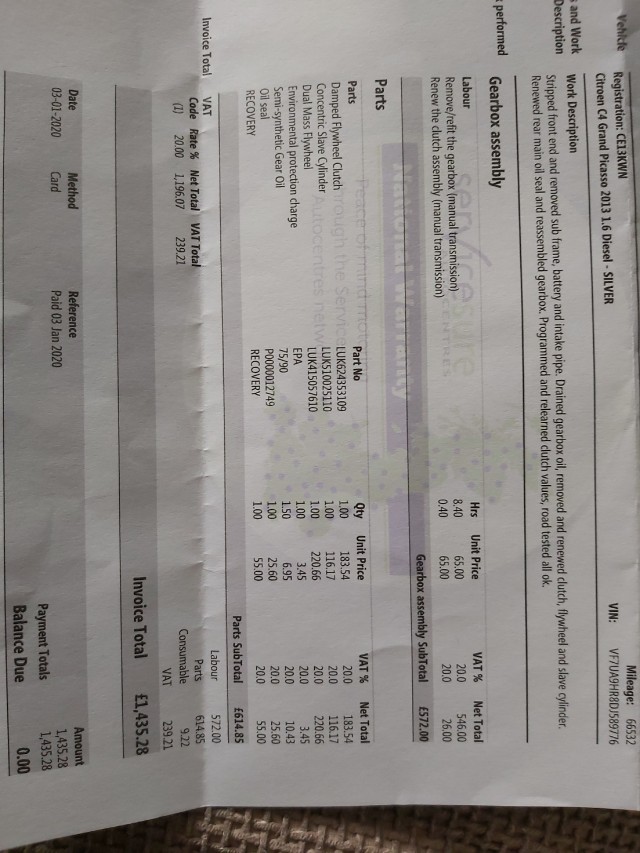