Another tale of rack replacement on an 'X7' C5. Hope what I learned might be of use to someone. Mine is a 2009 1.6 HDI Tourer, bought as an ex company car 7 years ago it has now done 240,000 km. It developed a leak from the pinion shaft a couple of weeks ago.

First off, sourcing a replacement took a bit of searching. I live in France and my first port of call (Oscaro) had none in stock at all, of any brand. (Probably can't keep up with the demand.) I found some refurbished units around for under 400 Euros, but the cost of returning the old one would have added to this. My local parts store wanted 637 Euros exchange for a refurb, but I found that 'Pieces et Pneus' had new 'Bosch' units in stock for 680 Euros, a bit more than there were available for from Germany, but with postage costs factored in not by much. ('Bosch' exchange units were also available for around 500 Euros after the rebate for returning the old unit.)

Reason I spent the extra on a new unit is that it came complete with track rods and studs and one never really knows how well a refurb has been done, what other wear it has accrued and I knew it would fit. Given that ZF was taken over by Bosch, I also reckoned it would likely be and 'OE' ZF unit, and indeed it is, but at less half the price Citroen charge - and less than a ZF exchange unit.

Getting the old one out was 'fun'. First off, the sub-frame has to be lowered in order to get enough clearance to free the pinion shaft from the inside of the car. However, there is no need to remove it completely if you can get the studs out that secure the rack. Instead leave the sub-frame connected to the suspension struts, remove the sub-frame rear body mountings, the bolts that connect the rear sub-frame to the front sub-frame, the lower engine mount, the exhaust where it joins on to the cat, and the clips securing the hydraulic pipes for the rack. This will allow the rack to be lowered, supported by a jack. Have no fear, the engine and other parts will remain securely supported from above.

A few issues. Firstly the rack studs were seized solid and are recessed into the subframe. One only moved with the help of large hammer and I ended up cutting through this stud (on my car the right hand one) with a hacksaw after the rack had been forced up a few inches. The left hand one (which secures the pinion end) succumbed to a Stilson applied to it in the gap created by forcing the rack upwards. Secondly, the sub-frame to body mounting in the wheel arch is secured with a captive bolt held by a plastic cap. Naturally, these were also seized, with the plastic bit just turning and breaking. Answer was to cut down the outer part of the jaws of an open-ended spanner, so it could be fitted into the hole where the plastic bit is secured. The bolts securing the hydraulic hoses were also seized into the sub-frame, but freed off after a bit of heat was used around them. Apart from that the jobs isn't as bad as first appears.

Reassembly was straight-forward. Only concern was the possibility of leaks from the hydraulic pipes where they join onto the rack. In preparation I had ordered some 'Peugeot / Citroen' O rings, plus some alternatives from Simply bearings.

In anticipation of such issues I had ordered some Viton O rings in 7.5 x 2 mm (= 11.5 external) and 8.5 x 2 mm (= 12.5 mm external). I went for this size as leaks can occur from the pipe side of the O ring, and from the side that is in contact with the bore of the rack. This size would be a little tighter than standard for the internal dimension, but also a little larger than standard for the external dimension. (I know that some have tried 8 x 2 mm and 9 x 2 mm O rings only to find that they leaked - this is probably because they were over-sized on the internal dimension.)

Another point is that over-tightening the pipe securing clamp would not seem to do anything to reduce leaks. This is because the seal is effected inside the bore of the rack, with the clamp just being there to hold to pipes in the correct location. Anyhow, I used the 7.5 x 2 and 8.5 x 2 mm O rings and it doesn't seem to be leaking. ('Famous last words', maybe.)

One other point. I know that there is a lot of talk about these racks failing because the recess where the pinion shaft enters the rack holds water that corrodes the shaft where it touches the oil seal. The possible solution I hit on was to fit a couple of 17mm plumbing washers to the pinion shaft, packing a bit of grease underneath them and preventing them from moving up the shaft with a close-cut cable tie. These fit very tightly on the shaft (which is 18 mm or so) and yet just clear the housing recess, turning freely with the shaft, effectively creating a 3rd seal. The end result looks very neat and will at least stop water collecting in the recess.

A lot of info their Bob, thanks for posting.

A lot of us have had these go and are on our third rack now. - a lot of other info here, including a few of us who have used a CV type boot over the pinion itself to protect it from water splashed and the water settling as you have discovered - plus copious amounts of marine quality grease!

Interesting info, Bob, including what you say about O-ring sizes.
I've found that Citroen can be a bit mean on O-ring thicknesses (by just a fraction of a mm), so that compression of the ring is pretty slight.
Examples have included strut-tops, heater matrix and sphere stoppers/Valprex valves - where a slight increase in thickness produced a much better seal.
Top

Good point about the seal sizes. Whilst fitting the rack I also noticed that oil is weeping from the noise reducer where it fits into the turbo outlet. This connection relies on a 39 x 2.2 mm O-ring. (Part number 1440 81.) Next job is to order a replacement O-ring - likely 39 x 2.5 mm - to see if this will stop the leak.
Top

For reference, here is a photo of the rack seals. On the left, those sold as direct replacements on eBay. In the centre the O-rings that were fitted to my rack. To the right the 7.5 x 2 mm and 8.5 x 2 mm Viton replacements that I fitted. Both have a slightly smaller internal and larger external diameter, and are a fraction thicker than both the originals and 'same as OE' replacements. 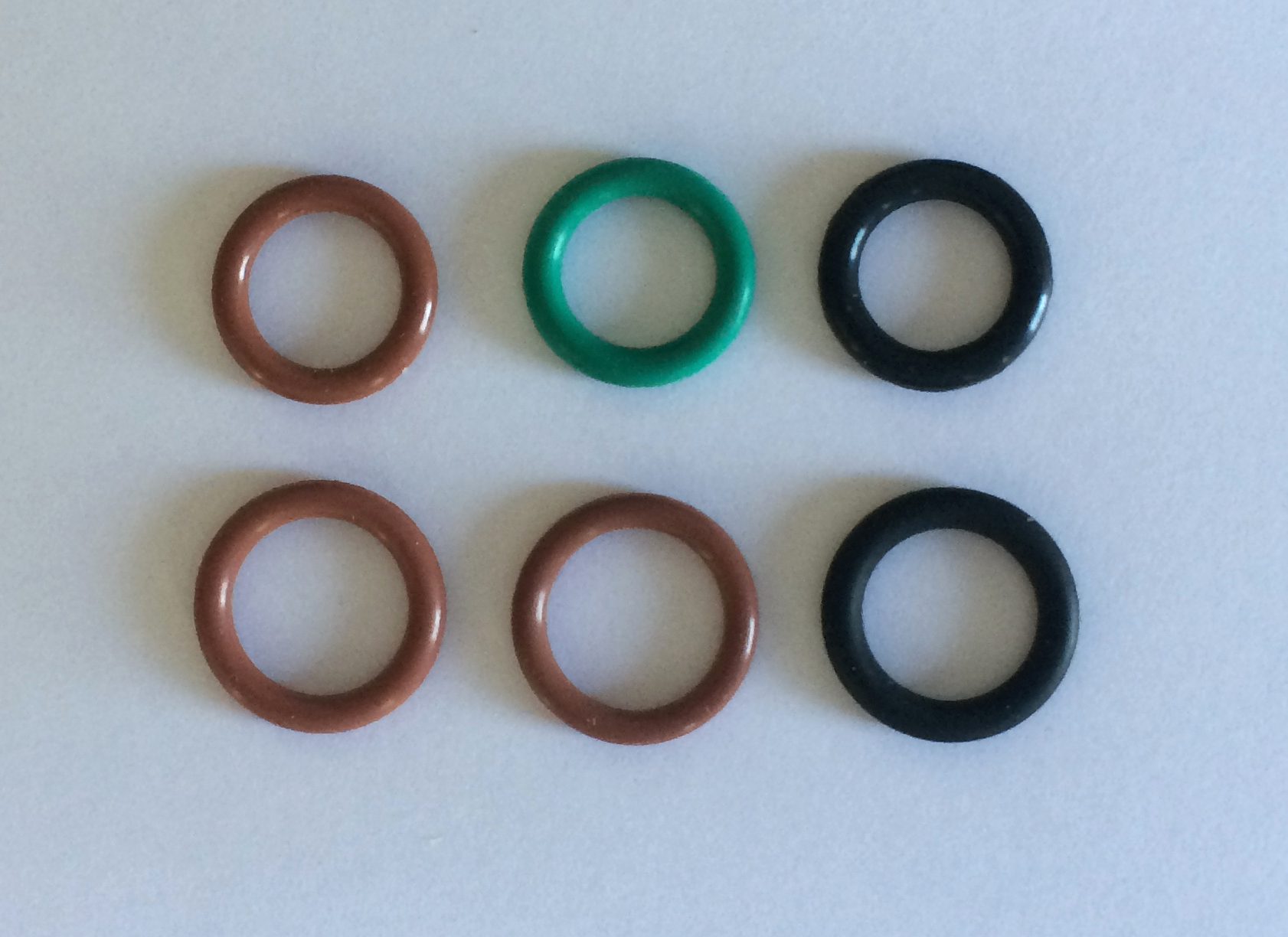