Last weekend while driving home I got two times the warning message "risk of particle filter clogging..". Later, connecting the diagnose I have found stored in engine ecu the fault P1490 - Detected overloaded.

I don't understand why I get two time the warning message, all the conditions to start regeneration were met.
In standard parameters/ exhaust line at parameter "Authorization of regeneration" the value is "Yes". This means that something is prohibiting the regeneration but I don't have other faults stored

Now I'm a bit confused what should I do next. I was thinking to fill up the additive Eolys with 1 liter, the diagnose show that I still have ~600ml but is only an estimated value and is possible that the additive tank is empty. Since I have the car I've never filled up the additive.
Any other idea is welcome.

Here you go, a few places to start. Getting some live data on Diagbox may help narrow the issues. It is unlikely to be the additive, as assuming the counter was reset the last time it was topped up then it should give a specific message about the additive level being low.

This is likely to be the filter itself getting blocked. What sort of trips do you do - stop start driving in traffic, short runs with frequent traffic jams, short distances? These can all prevent regeneration from occurring if the process gets interrupted all the time.

Check the soot levels with Diagbox to see what percentage they are at and also when the last regeneration took place and the average distance between regenerations.

Usually I'm driving 80% long trips 20% short trips and is strange that I've got the fault code during a long trip.
Here are the last parameters of dpf. 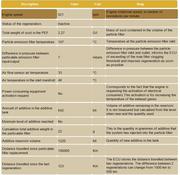 Today I have removed the shield from additive reservoir and surprise, I have green connectors and RPO number is 13028. Shouldn't be blue?

No keep to Infineum F7995 - that's why a cross reference is needed between RPO and connectors - they continue to use the older type of additive system until they switch over so always important to check.

As for your printouts - some data not clear on one of the entries there... But the filter is significantly blocked at the moment - nearly 70%! So much more over this and it won't be able to regenerate - meaning you will have to have it removed and cleaned.

Now as you can see on the second printout - the ECU does not think a regeneration will be possible given current driving conditions (0%) in short term and only a 47% chance of a regeneration in the longer term.

So I think you need a decent trip on the motorway / dual carriageway somewhere, where you can keep the car in 4th gear and higher revs for a while and allow it to try and regenerate. Either that or you will have to perform a manual regeneration - but these are not ideal without the car moving as the heat generated is not good for the components without the air circulation.

There are some places that will do an in-place DPF clean for you using some cleaner from a cannister that they squirt in.
Top

Thanks Marc, for clarification with Eolys type, I was ready to buy some PowerFlex.
I was thinking about DPF cleaning but I have no idea what to chose. I have found that there are two major types of cleaning done by workshops and each says that his method is the best and the other one can ruin your dpf. First method is chemical/ mechanical where the dpf is cleaned with some formic acid and high pressure water, the second method is with high pressure (90-140 bar) and hot air (around 400-700 degree Celsius).
Top

Here's an example of the in-place cleaners sold - some garages have similar systems:

It still needs a regeneration afterwards to burn off all the dislodged soot, but should still be a lot cheaper than the labour of taking off the DPF and refitting.
Top

Ok, so the tanks vary engine by engine. For your DW10CTED4 engine, unusually there is less fluid than many of the others:

So it would appear that at the factory it is filled to 1.57 Litres.

As you know there is no 'physical' measuring system - it is estimated by the engine ECU on the X7, based on regens, mileage, driving conditions and fuel quantity added.

To manually check, it requires removing the tank and pouring the additive into a measuring container. So these are the expected amounts of additive that should be in the tank at the stated KMs / Miles:

These are the quantities under severe driving conditions (to cover the worst driving conditions and therefore probably more frequent regenerations taking place):
As for the entire capacity of the tank, they are not stated anywhere that I can see, but vary between engine models.
Top

Hi Marc,
I kindly ask you to confirm if the code for replacing dpf is the right one for my engine.
Is about Walker 73157 OE 16066014 80 and from what I see is replacement filter for my rpo number and the age of the car.
Now my car still working, the dpf is at 76% and the average distance between regeneration on highway is approximately 230km, but I want to be prepared for the worst and I'm taking into consideration to change the particle filter.
I'm not decided yet if I will try to clean it first since I know that the solutions from the market are made to clean the soot but not the cerine that is blocking the filter.
Top

Either of these will do and yes, you have the part correct (1606601480) which is the Citroen part number for the cheaper replacement filter.

Cleaning them is never as good as a replacement - you will never be able to get them 100% cleaned out due to the porous nature of the filters. The internal filter material is sensitive, being that the original filters fitted by the manufacturer are made of Silicone Carbide, they are made in smaller pieces using special cement to hold them together allowing expansion internally. The cement can easily become damaged by use of pressure washers (and I've even seen people banging these with a hammer to try and knock the soot out!). So if you can stretch to a new one it will be worth it if you are keeping the car to be honest. Let us know how much the Walker ones are as a matter of interest if you are making enquiries.
Top
Messages: 10 • Page 1 of 1