Just read that John Haynes has died aged 80 on the 12th February. If it where not for him, a good number of us would not be a member of this forum. It was his manuals that gave us the power courage to mend our own cars. It's still a must to own a Haynes manual for your car if one is available even though we have great forums like this to help us.

I still have my Haynes manuals for the cars I have owned. MGB GT, Volvo 740, Cavalier mk3, Xantia, C5 mk2 and one for a GM engine (can't remember what one.

Thank you John Haynes for giving millions of ordinary men and women the courage fix their cars.
Top

Would echo that, we've much to be grateful to Haynes for. Interesting to look at the evolution of these over the decades. Early editions were built on the "complete strip down" philosophy, when the mechanicals were essentially simple, and electronics minimal (or even absent). Photos from these early publications were truly awful (Haynes had their own printing facility), but that got sorted.

As time went on, several things happened: cars became increasingly complex and less amenable to DIY maintenance and repair, and many owners' skills (and stock of tools) just weren't up to it. Complete strip down became more and more challenging for Haynes, and more and more pointless, as many of the procedures were unlikely to prove popular.

Sketchy descriptions and 'cop outs' ("Refer to Dealer") became more common, and circuit diagrams - once done for individual model variations - became 'typical' and generalised. The circuit diagrams, derived from the manufacturers' own by T.M.Marke, were a model of clarity, even if the odd mistake inevitably crept in.

Paper quality fell off alarmingly in later years, but along the way there were also many non-car editions, too - including John Wickersham's splendid books on Caravan maintenance and improvement, with even some titles on Parenthood, if I remember rightly.

We were lucky to have had them.
Top

I believe they even did one for the Falcon and the Enterprise... Not sure I'd have the right tools, official or otherwise to fix a warp drive though...

Wonder if there will ever be a TARDIS Haynes Manual.

I do remember seeing a road going Dalek back in the day. Someone had made one based - I think - on a Mini subframe. This must have been late 80s - early 90s. I thought it might have been Andy Saunders who made it, but I've found no reference to it

GiveMeABreak wrote: ↑
17 Feb 2019, 11:20
I believe they even did one for the Falcon and the Enterprise... Not sure I'd have the right tools, official or otherwise to fix a warp drive though... 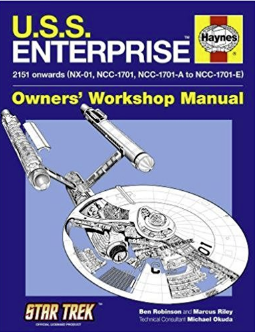 "Reassembly is the reverse of disassembly, only be sure to use fresh dilithium crystals"

My crystals are fine, just need my plasma conduits cleaning out.

I didn't know anything about the chap personally speaking, but I think it's fair to say I learned new ways of cursing whilst trying to decipher their manuals:- Mainly on account the pictures bore no resemblance to the parts and instructions were hopeless more often than not - but as has been said, one simply had to have a Haynes manual on account of there being bu**er all else.

Well I'm sure he has gone to car manual heaven now.
Top

GiveMeABreak wrote: ↑
17 Feb 2019, 11:20
I believe they even did one for the Falcon and the Enterprise... Not sure I'd have the right tools, official or otherwise to fix a warp drive though...

"Reassembly is the reverse of disassembly, only be sure to use fresh dilithium crystals"

The crystals will need to be properly alignment tuned for the warp drive they are fitted to, and this can only be done with specialist equipment at a few dealership workshops. You can look up the locations in your starships' handbook.
Top

Some of the tools left over from the starship.