Decided to put this one in it's own thread....

As you may have seen in my other blog, my motorbike will be 90 this year, so I have decided it is time I pulled my finger out and got it rebuilt. There's not so much to do around the house(

), the boys are a bit older, and I've got enough funds to do it. So this blog will follow its progress. The aim is to have it rideable by the end of the November and to have a party, on what would have been my Grandad's 103rd birthday.

It's a 1929 Velocette Model U. It looks (or at least did when it was in one piece!) like this, although a good bit rustier:

Another one, sold a couple of years ago by Bonhams

It's a single cylinder 250cc two stroke, about 3hp. Registered 9th July 1929 in Bury, reg no EN 4251. It was bought by my Grandad some time in the 30's when he was working at a motorbike repair shop in Dalton in Furness - exact date has been lost: although he registered it when DVLA was computerised in the early 80's, and I have an original log book (and a V5), it is only a continuation book, so the date of purchase is not listed. On the V5 I have he is listed as the only previous owner! He rode it (a lot, it shows plenty of wear!) right up until 1952 when he was knocked off it, and gave up riding after that. It was pushed in the garage with a view to restoration and a small start was made at some time - meaning I have lost a couple of parts. I inherited it after he died in 2000, and dismantled it in 2002, but no funds, then house work, and children, got in the way of rebuilding it. My plan is not a concours restoration, but to rebuild it using as many original parts as possible, so that it bears as much history as possible, and to show that it was well used (and abused!).

Get a new bush made for the main 'bearing' in the engine
Have a critical look at the forks and see if a full refurb is required, or if they can be used as is (I suspect the former....!)
Get new piston rings made
Get a new exhaust clamp made (they screw on the barrel and one is split)
Get new exhausts made
Refurb the carb
Refurb the magneto
Have a look at the wheels - might need to be rebuilt
Get the brakes relined - including getting one of the shoes re-cast as it has snapped at some time in the past
Pull the dent out of the tank(*)
Straighten the bars
Refurb the saddle
Get it painted
Get new tyres
Put it back together
Find / remake the missing bits - these are as far as I know the gear change gate on the tank, and the engine decompressor mech

Contacted the machining people, and they have done some of these engines before,so I will be parcelling up the engine and crankshaft and sending it down to them.
Contacted someone about rebuilding the Magneto

I might dig out the bits over the weekend and take some pics, and work out what else I need to make / find.

Amusingly, if I want to ride it on the road, I need a full Motorbike licence, as despite the modest power, it is >125CC so needs a full licence!! So that is on the list as well.
Top

That's a lovely old thing Richard. I look forward to seeing it on the road!

Licence - do it the DAS way, cost you a reasonable amount but it's the quickest and easiest.
Top

Had a look through the bits today. The forks definitely need an overhaul - there is significant wear on the spindles, and the bottom holes must be 2-3mm oval! It must have been pretty scary riding it in that state

I also found some bits I didn't know I had - control cables and fuel pipes (there is a link pipe between the two sides of the tank) so that is a bonus. The saddle is likely saveable so that will retain some originality. I found the decompressor, and it looks to be complete - there is a tiny brass bolt which is broken, and I've written on the tag on the bag "note broken brass location bolt" - but I can't recall where it came from, and I can't see what it would do....

Here is the bits in storage on a shelf!!

This is the dent in the tank. It's not that bad, so it will be staying I think.

A period home made repair to one of the rear brake shoes!!

And the engine barrel / head, just because...

The firm that is going to do the engine work also makes piston rings, so sending the piston down there as well to get new rings made. Having looked through the bits, I had forgotten how much I had done, it's mostly just a case of getting all the bits done I couldn't do, painting some bits, and then putting it back together. Easy

Tomorrow I will dig the wheels out and see what state they are in; I think I need to have those ready otherwise it will become an immobile lump if I start to re-assemble it!
Top

If I was you I think my first plan would be to just loosely reassemble as near to everything you have. That way you'll quite quickly be able to make up a reasonably comprehensive to do list and find what's missing rather than discovering that when you're nearly done.

Cable tie ziplock bags to stuff to hold their internal components where possible.

Other plus side to this approach? You'll get to see the bike more or less looking complete again before you're too far in. That I've found can be a hugely useful morale and enthusiasm boost to start out the project with.
Top

What sort of magneto is that on your shelf, it looks to be an earlier design than the one on the Bonham's bike?
Top

Might be worth joining the vintage motorcycle club if you are not already a member, they can help with parts and advice
Top

It's a Maglita, Mike. It's a combined mag and dynamo - which had a pretty poor reputation, but it was a good solution for the time. AFAIK it's the original mag - I have the lights that go with it. Presumably it doesn't work too well, as the bike was fitted with a secondary dynamo when I got it - a home made pulley off the flywheel with a belt drive to an underslung dynamo (home made bracket!). Maglita info here: http://www.themagnetoguys.co.uk/maglitas I'm hoping that those guys will refurb it. There's also a period lead acid battery there, which has never been filled!


Bick wrote: ↑
13 Jan 2019, 04:52
Might be worth joining the vintage motorcycle club if you are not already a member, they can help with parts and advice

I probably will do, and also the Velocette owners club - I was in the early days, but it has lapsed - intending to re-join. Their spares bit doesn't do much for early 2-strokes, but seemingly there is a another 'U' belonging to a member in Scotland (pics from the owners club website): 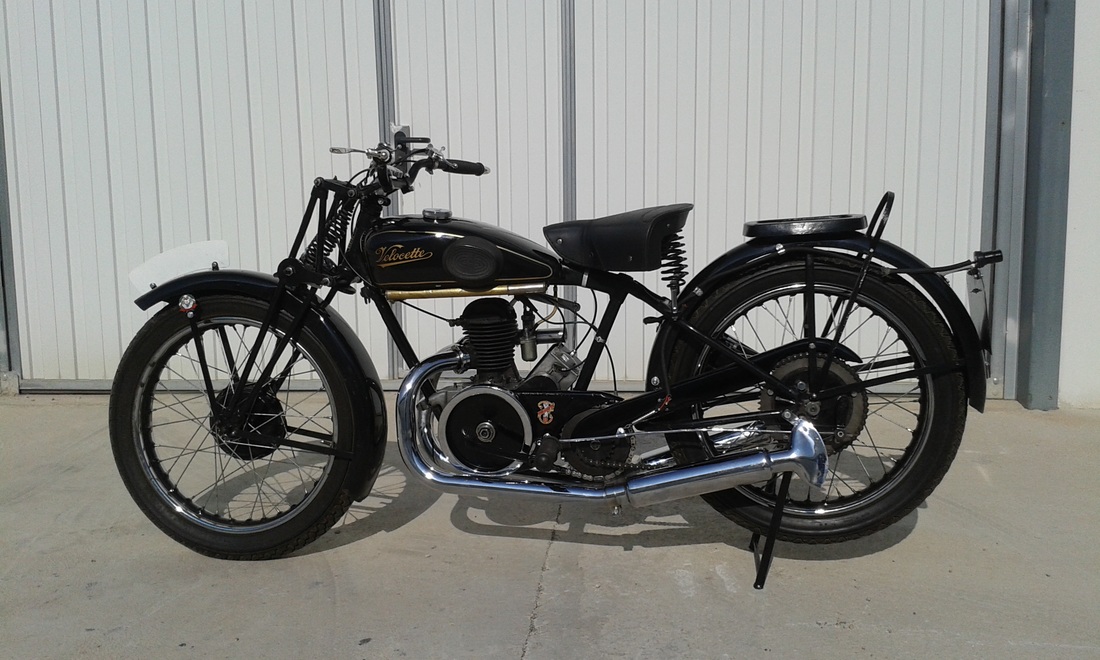 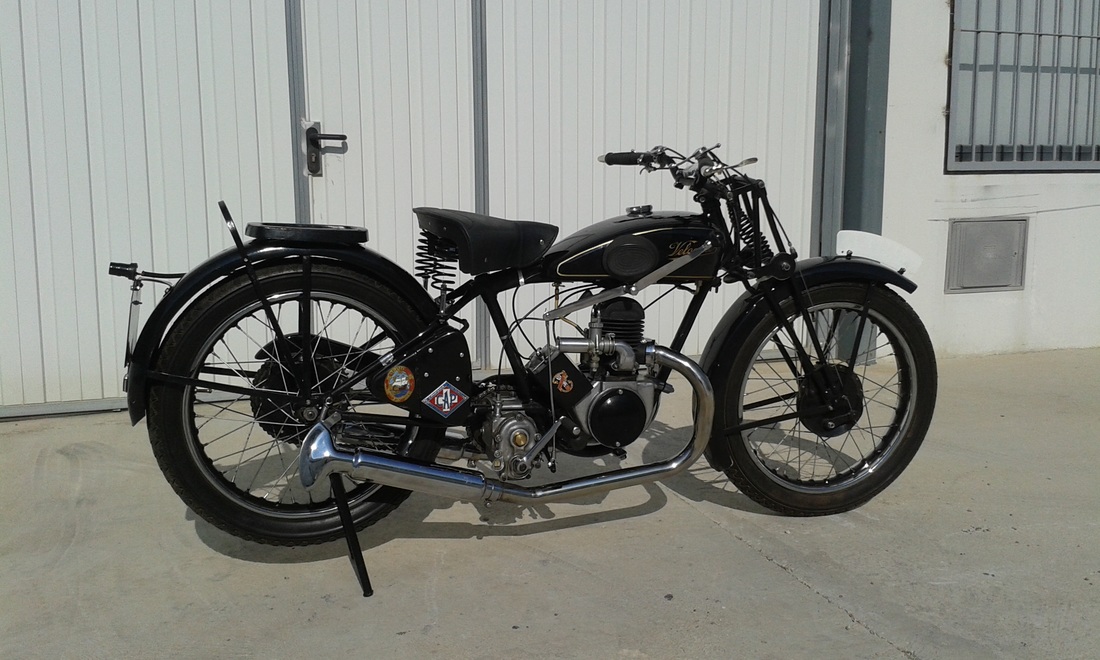 My dad was a specialist magneto repairer, and I remember him talking about the Maglita, but I never repaired one myself, although he did teach me to rebuild a few other vintage mags.
Top

And here's a close up of the gearchange gate from a youtube vid of a slightly later GTP - should be easy enough to fabricate. Interestingly, that U above (which is 1927) does not appear to have a gate, but there are definitely tapped holes in the side of the tank for one on mine.....

Got the wheels out today. They seem to be OK. Neither rim nor spokes are heavily corroded, and the spokes are evenly tight. Rear is missing 3 spokes however.... I put the spindles back in and spun them held in the vice - there's a bit of dunkle in the rear but they run not too bad. I've misplaced most of the balls from the front wheel somehow, however - but they're just loose 5/16" balls so that's no problem.

Then dismantled the head light, needs new glass and re-silvering and the wiring sorting out. Not sure I understand how it is supposed to work, but it can't be that complicated!!

I found 2 bolts I've no idea where they fit - they've got machined heads with small pips on them.... sure I'll find a home for them somewhere.
Top

Love this, if you don't have a licence to test it when it's ready, ring me, I'll fly over, just for the privilege. Keep it 'you're Grandad's bike' though, as pretty as the one above is, you'd be scared to ride it.
Top

Now I've got some printer ink, engine, forks and mag will be getting sent off for overhaul. Then I need to buy some rust convertor, so I can attack the frame, wheels, and mudguards etc, then get them painted. I've found that you can easily buy new springs to go under the saddle, so I'll measure that up and work out what I need - I should then be able to keep the original saddle cover just with new springs and painted underframe. One of the bolts at the bottom of the main saddle springs is a bit bent, so that might have to be replaced. Need to find a local blacksmith as well who can put the handle bars in his forge and straighten them out.
Top

I shall now be following with great interest

Vintage motorbikes is a particular interest of mine...
Top

Keep watching, Jim, determined to get it running this time!
Top

Excellent! I will be Richard