Must say, I was hugely heartened to hear this announcement today:
http://www.theguardian.com/environment/ ... ir-centres .

This gives clear notice to the car manufacturers of what is needed. Some already have very capable all-electric offerings, albeit too costly as yet. Expect the Chinese to start offering all sorts soon, which will be a game-changer. They already have 200km+ double-deckers on trial in London.

I always wanted to see this in my lifetime, and it might just happen.
Top

This gives clear notice to the car manufacturers of what is needed. Some already have very capable all-electric offerings, albeit too costly as yet. Expect the Chinese to start offering all sorts soon, which will be a game-changer. They already have 200km+ double-deckers on trial in London.

I always wanted to see this in my lifetime, and it might just happen.

Other Cities will follow, and the pace of change will increase.
Citroen have their foot in the door in Berlin with these 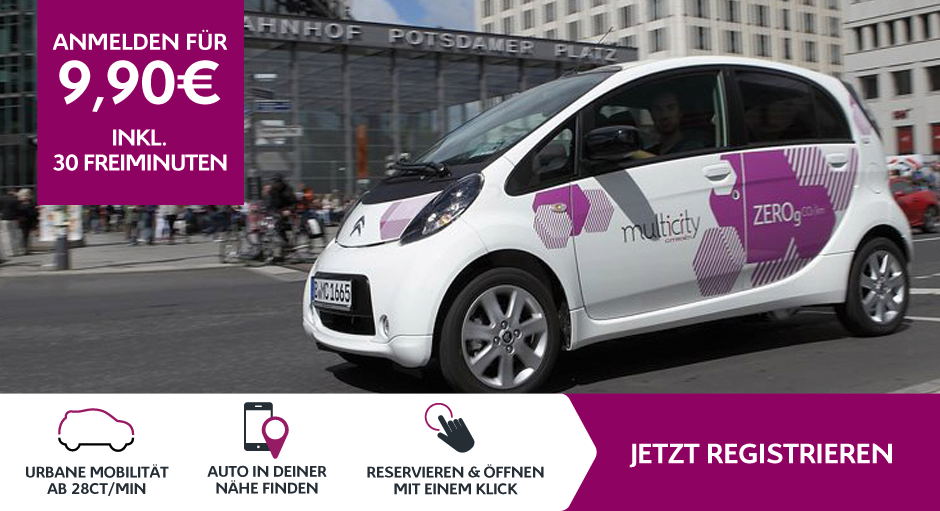 It is good news indeed. You only really understand how bad diesel exhaust is when you’re a cyclist and also when you live in relatively clean air and then visit London for the day...

No doubt old diesel dinosaurs like my 1.9TD will soon be made to suffer...
Top

My guess is that there will be "built before" exemption, but probably none too generous.
The Classic Car lobby still holds some sway, but not to the point of compromising mainstream legislation.
Cities will come first, then elsewhere.
It's good news, it really is.
Top

Nice to see a bit of co-operation between the Car makers too, but a nice sting in the tail for some rivals!

BMW, Daimler, Ford and Volkswagen Group, including Audi and Porsche, say they will build 400 charging sites. The plug-in points will provide ultra-fast charging for cars along major roads.

Tesla cars will not be able to use the charge points as they use different systems.

The network will be based on combined charging system standard technology. Drivers will be able to top up using plugs charging at a speed of 350 kW, which is considerably faster than the current market leader.

My idea of replicating evolution of the Petroleum Infrastructure which started out with "Motor Spirit" in cans of fuel available from your local hardware shop chemist or or wayside Inn seems to have been overlooked, and the industry has by-passed this in favour of attempting to build a finished network in tens of years which took the rival petrol network 100 years to get where it is today.

Of course with a bit of co-operation the petrol network itself would seem the logical place to locate the necessary electric infrastructure, but maybe not by having large numbers of bays where electric vehicles sit plugged in for 30 minutes each to refuel themselves, but where all that timewasting charging business is actually carried out on an industrial scale elsewhere and distributed to the network, and rechargable "cartridges" are simply exchanged for spent ones at the filling station.

Its a neat solution and has been used for centuries.
For rechargeable cartridges read...
From the days of the stagecoach replacing "spent" teams of horses with fresh ones at coaching inns on the Turnpikes every 8 miles or so. No attempt made to immediately recharge the spent horses so they could go out and do the next 8 miles by forcefeeding oats and hay (viz plugging a car the into a charging station), while travellers waited for the digestion to work and refuel the horses. No just exchange the spent team with a fresh team, and the travellers are on their way again.

NewcastleFalcon wrote: Of course with a bit of co-operation the petrol network itself would seem the logical place to locate the necessary electric infrastructure, but maybe not by having large numbers of bays where electric vehicles sit plugged in for 30 minutes each to refuel themselves, but where all that timewasting charging business is actually carried out on an industrial scale elsewhere and distributed to the network, and rechargable "cartridges" are simply exchanged for spent ones at the filling station.

That looks like a very sensible and viable way forward Neil...

I love your likening those fast (and bloody dangerous) very fast chargers to trying to force-feed a horse oats!!! You are spot-on. just like a horse, a battery is far better if it can feed slowly and rest whilst doing it...


white exec wrote:My guess is that there will be "built before" exemption, but probably none too generous.

One hopes... I can live without taking my car into large cities.. I don't as a rule anyway as public transport is generally far more appropriate for going to and getting around those places...

Nottingham is an excellent model... Easily accessible free Park and Ride well outside the city and then a modern tram system that covers all the city and costs very little to ride...

That's the future for me... Bring it on

Hopefully the government will not tolerate a variety of incompatible charging points, and will insist on standardisation. The EU will surely do this, just like they have done with mobile phone/device chargers.

After all, the electricity arriving at the charging points will be completely standard; all that's necessary is to have the appropriate control gear inside each 'post' to cope with different electric car charging types. Intelligent socketry (the charging point recognises the car type) would be even better, and surely straightforward enough.

Things are moving along fast now, with some very recent developments in battery technology that do allow ultra-fast charging. There is also the technical possibility of contactless/inductive charging, if weight issues can be addressed. Quite possible that buses will make use of this, and a possibility that stretches of road themselves could provide charging 'on the move'.

I think the real pollution problem is the sheer number of vehicles. Diesel exhaust in the '50s you could cut with a knife especially heavy lorries, I think the power-weight ratio was about 9 bhp per ton, so as you can imagine they were running at full throttle most of the time, but of course there were nothing like the number on the roads then.

Electric vehicles are certainly an improvement but the electricity has to be generated somewhere until there is enough renewable available, also the pollution caused by manufacturing them is still going to be a problem.

I think the real solution is to move somewhere where there are less people, outback of Australia?

The problem is cities, and their huge number of vehicles. It would be good to be able to reduce the number, but even if reduced to 50%, it would still be a problem.
Buses, taxis, the short/medium commute, delivery vehicles, the school run, shopping - all those are within the scope of battery vehicles, even with today's technology.
The taxi drivers can be expected to winge like fury, but they are now being given 10 years notice of this change - unless they're really going to claim to still be running 10-year-old vehicles in 2025!
London and other cities only went 'smokeless' because someone changed the rules, and we have all benefited from that.
The advantage of electric propulsion is that it is clean at the point of use, and the problems of the environmental impact of power genetation can be dealt with "at a distance", with planned changes to the fuel or energy source being used.
Peter is right, there is an environmental impact from building the vehicles in the first place - but we're doing that already with our current crop of internal combustion jobbies.
Top

There's one aspect of all this that I wonder about, that of particulate emissions, diesel cars have now been fitted with particulate filters for some time, they're hated because they get blocked and are very expensive to sort out.

Why haven't the car makers made them like oil, air and pollen filters i.e. easily serviced, a quick change cartridge added to the service schedule at say 20,000 miles.

I also wonder about the blame given to the motor car for all the ills of people with asthma and the like, have I developed immunity, I've worked in close contact with all makes of vehicles, leaded petrol, diesels and all, every day of my working life, I'm 82 in February and my chest and lungs are still as good as new.

I would agree, in fact before the 'modern' range of electric vehicles appeared there were still some with lead acid batteries that would have been adequate as a second car for the school run, shopping etc. In fact when I worked in London in '54 their were a lot of electric delivery vehicles about, Harrods used them, quite large ones. Our milk and bread was delivered by electric power.

It seems though that people didn't like the idea of electric vehicles then so they never got off the ground. Now things have changed and so have the vehicles but there is no way I could afford one at least until the reach the price of a 15 year old 406.

I don't feel guilty about running my diesels as the Hdi engine is almost as efficient as they get and I do most of my driving in rural areas where pollution is not so much of a problem. By the time electric power has become affordable I shall probably be to old to drive.

Me too Gibbo, and asbestos dust.

A lot of us are old enough to remember a good few electric vehicles, not just the Harrods vans, but trolleybuses too (72 seat, the last ones, built in 1950 iirc, and actually faster than the Routemasters that replaced them).

I've had a minor ambition to own and run an electric car for decades now. Even looked at milk-float technology about 40 years ago. There was even a milk-float scrapyard and repair business at Alfold Crossways on the A281, and not very far from Dunsfold aerodrome, with whom I had a conversation or two. My Dad worked from Crompton Parkinson, and one of the staff discounts he could avail himself of was a 70% discount on Morrison-Electricar vehicles, which came equipped I think with Crompton batteries and motors. Never did take that one up!

Agree that it would be good to see electric propulsion take off again, and in our lifetime. I think it will happen. Let's hang in there!
Top

And me plus a load of solvents and chemicals, all of which have now been banned such as carbon tet, trike, Arklone and the like

By rights I should be dead by today's standards... I'm still good...

Must be, I ran a 5Km Parkrun in just over 26 minutes this morning!
Top