Well .... it had to happen I suppose and here it is. Been lurking around these forums for far too many years now and under various nom-de-plumes ... superloopy, northerner and now xantiamanic although the latest incarnation is becoming more of a joke with every passing day. This blog has come about for a couple of reasons but mainly because i have now been given a final, final dictat from SWMBO to 'fix up or get rid' of my two immobile activas which i will refer to as Scraptiva1 and Scraptiva2 [emoji20]. I'm guessing a lot of us have been here ...

Scraptiva1 is a Dante Red 1996 mk1 car which, despite having virtually no topcoat left is the better of the two cars structurally and mechanically. She has problems which i'll outline in a later post.

Scraptiva2 is a 1998 mk2 car in Silex Grey with a cream interior. I like the colour now but she was bought for her beige leather but thats about all. The car looked like it had been rolled on the nearside with a number of dings and paint mismatch above and below the door trim. Those and a different door mirror to the offside raised suspicions. But the car made it home, over 250 miles without problems before deciding to 'immobilise' me out soon after. Stood for a couple of years until that was resolved. However there are now numerous activa specific problems, leaking activa rams notwithstanding she now has the exact same issue as her sister car ... namely a bust pipe on the nsf. I had been tidying her up over the weekend in readiness to make a start on the rams today and came to move her a car length on the drive when ..... hiss,hiss,hiss... followed by a mist of steam, now known to be green blood, followed by a big puddle on the drive. To say SWMBO was aggrieved at this is an understatement [emoji16]

So .... to finish for now I intend to give both cars one last go before deciding their fate.

Another reason for this blog is to provide a repository for the many questions I will no doubt have and all welcome advice on fixes which i know there will be which i tend to lose track of if i post each issue (there ARE many) up singly.

Odds on the leak is the PAS pipe. Which is a right PITA!!!
Top

Just what i wanted to hear Richard. May as well just wind up the blog now then!

There are ways around it Mike... For instance, someone was offering a repair kit for it back along...
Top

Just a quick look cos i dont want to annoy 'her' anymore by powering up ... i'm not convinced it's the PAS pipe but thereagain what do I know

... route of said PAS would help I suppose.

It looks to be the same pipe that's bust on both cars but tracing the spay and drips is highly confusing.

The weather's not kind up here but here's an update. Pinhole leak from here ... 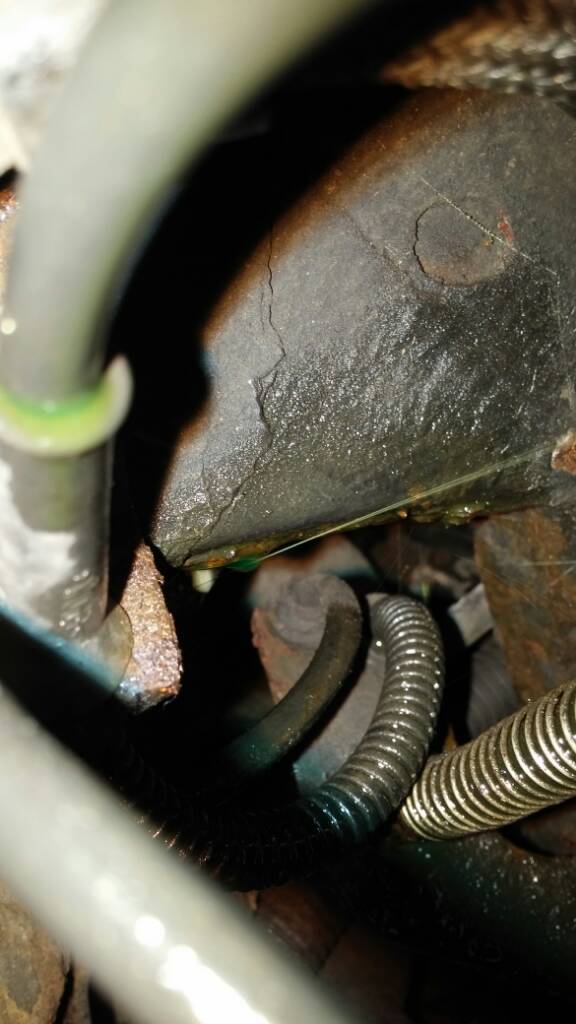 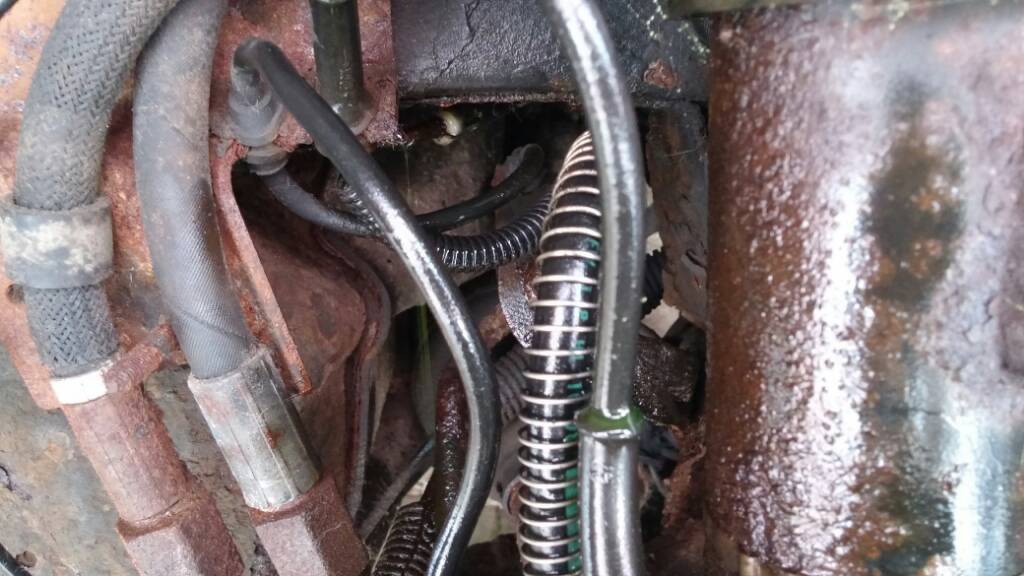 which appears to go to a curly pipe and then up to either the regulator or activa block. Is this the infamous power steering pipe? Cos if it is i'm going to need mardybum and he hasnt been on the site for a while. PM from last week stuck in outbox still [emoji20]

Digging into it ... the pipe does end up at the regulator, the one with the blue paint. 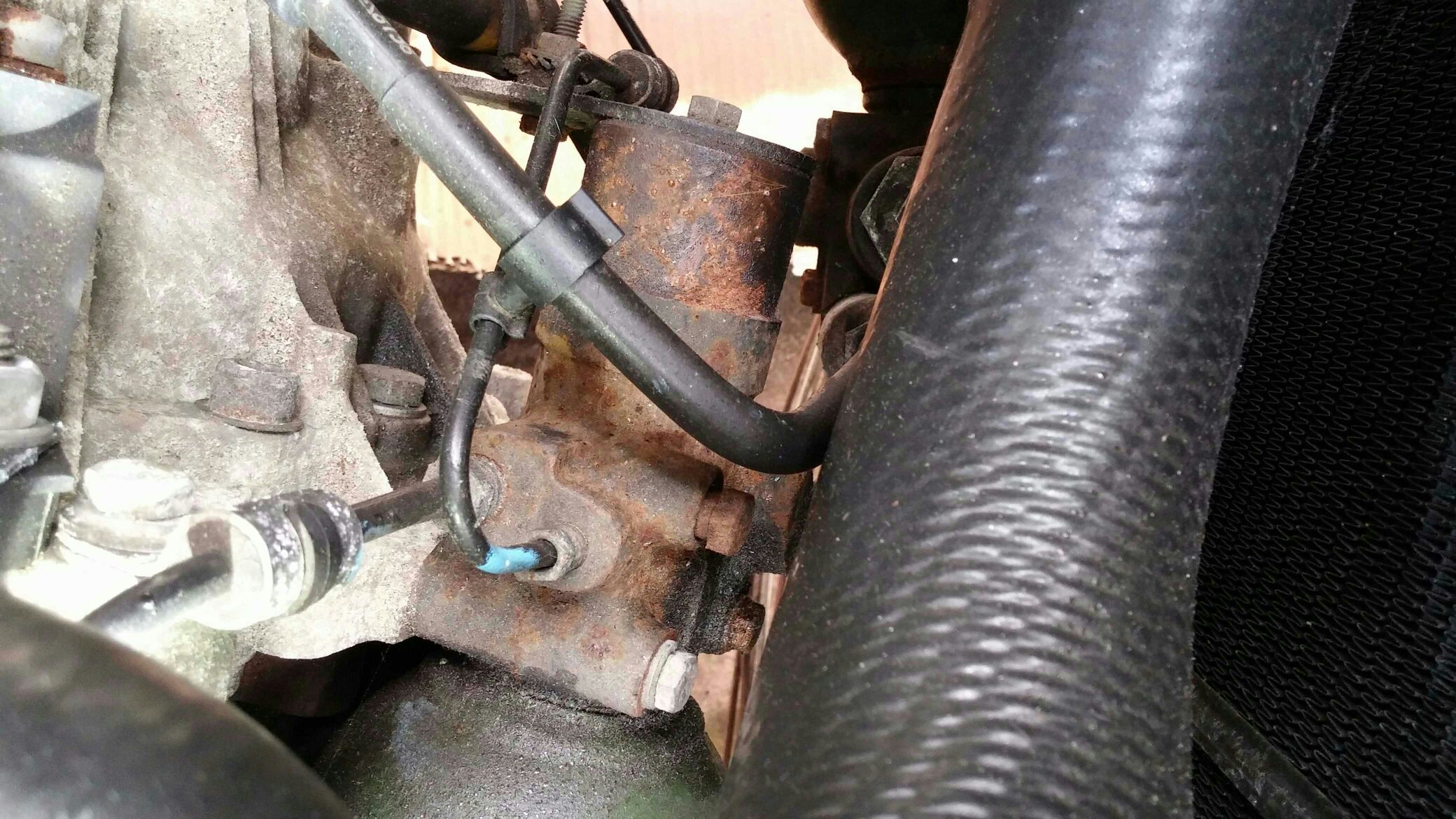 Any advice appreciated. I'm going to wrap the pipe up to allow me to move the car a fee feet keeping spillage to a minimum [emoji16] otherwise i'm a dead man [emoji1]

Thanks Jim ... so that's good news i take it? Unless of course aforementioned valve is way up in the guts of the car?

The pipe in question I think is 5270.Z4 now 'NFP' .... it's a 4.5mm diameter on service.citroen although mine looks nearer a 3.5mm. Can anyone confirm? And where does the safety valve live other than at tthe other end of that piipe

, i'm sure there's a short roll of 4.5mm kunifer somewhere but not sure its over 2m in length. Been in there for years! Any tips on getting the curly bit into the pipe if I manage to find it?
Top

The priority/safety valve is somewhere near the firewall in that area on the left hand side of the car where there are lots of pipes. It looks like a 4 (5 ?) way union but with an electrical connector on one end - it provides priority to the brakes if the pressure is low by shutting off the feed to the suspension, and also operates the low pressure warning light on the dashboard.

if you look over the back of the engine to the left of the LHM tank (looking into the engine bay) down the firewall you should be able to see it.
Top

Thanks Simon .... somewhere to start from. Just wondering if it would be possible to put a joiner into the existing pipe which looks good up to and beyond the 'curly flexi bit'. Might have enough 4.5mm pipe to do that.

Turned my shed upside down tonight and not a sign of any 4.5mm pipe. Anyone know of a uk supplier?

The last time I bought a reel of 4.5mm I got it from Plaedies.

I think I had to replace that pipe on a Xantia HDi once, I was almost at the stage of taking the engine out, then a friend of mine who is a mechanic and had done his apprenticeship at a local Citroen specialist managed to get his arms into it.

I cut the end of the pipe and used a 1/4 ratchet and 6 sided 8mm socket on the union, most of then will just round if you try them with a spanner. To do it up on the safety valve, I'm sure I had to cut a 10mm spanner in half to get to it, it was a right sod.

If you get it off the car and can work out what length you need, give me a shout. I might have enough 4.5mm pipe left. If I do, I'll pop a length in the post to you.