My new Gs has a small of petrol around the engine and front of the car. It has had new filter and pump recently, the pipes are not new but are not leaking. The carb looks a bit damp though. The pipes are all jubile clipped into place and a good tug has failed to dislodge them.

Also, the previous owner recommends not fill more than half a tank as there is a strong smell when going round corners.... Any advice appreciated!

Check the float height on the carb, it maybe set too high causing leakage around the top joint.
The fuel tank may be corroded and pin-holed, hence the advice not to fill. Or it could be the fuel filler pipe perished.
Top

Stonehopper wrote:Check the float height on the carb, it maybe set too high causing leakage around the top joint.
The fuel tank may be corroded and pin-holed, hence the advice not to fill. Or it could be the fuel filler pipe perished.

i had mine fixed and it was a valve of some sort at the fuel filler.

Where can I buy a carb rebuild kit from, also a petrol filler pipe as this one has been repaired with inner tube.

Any advie on checking float hight on a dual throat webber carb on this 1975? 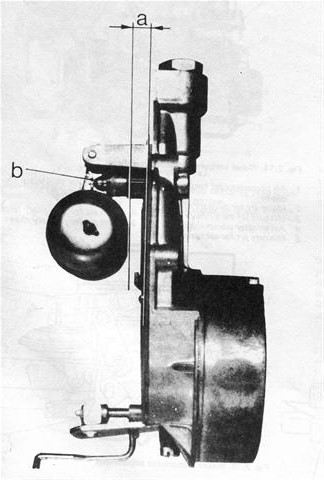 Carb refurb kit - shouldn't need one. Only a gasket if broken. Other than that a clean out and blow through of all jets.

Today I went to drive with my gsa and... a petrol smell in the cabin. Before it has been ok altough the idle has always been a little lumpy and the engine sometimes dies when letting the gas pedal off but no petrol smell. I have always been a dieselhead so carbs are a mystery to me. How difficult is to adjust a carb? My car has a weber carb. Also should I just in case order a rebuild kit?
Top

The carburetor is a simple device in essence, being fed by a low pressure pump like a lift pump on a diesel, and which delivers a flow of fuel atomised by a flow of air in carefully regulated amounts according to throttle and choke controls. Unlike the high pressure diesel pump, it does not require specialised test equipment for it to be dismantled and set up - other than the butterlfy stop screw and lock nut - which must NOT be touched.

Within the body are certain jets that allow the correct flow of fuel, and butterfly valves which control the amount of air accordingly. If you take the top off of the carb noting the connections with the vacuum advance and choke mechanism, you will see that dangling from the top is a device like a float in a toilet. It performs the same function - allowing so much fuel into the float chamber, and no more. UNLESS, the valve upon which the float acts is damaged or not seating correctly due to dirt. This is where you may find the cause of your problem. The float should be able to move freely within the chamber, and set up as is shown in the previous post. Be careful to avoid bending things, but the float can be removed by pushing its pivot pin out. That will also release the needle valve with spring - check for their order of assembly - and allow the needle valve seat to be examined as well as the needle valve. Foats can at times become punctured, and therefore of course fail to float, and cause flooding. If the needle valve does not seat correctly closing off the fuel supply, then that too will cause flooding. With the top off, you will also be able to remove the various jets. (Syringe out the fuel, or soak it out with rags). With the jets in the bottom of the chamber, it is advisable to use a cocktail stick to remove once unscrewed, and when replacing. A blast of air should be sufficient to clear a jet, or a bristle from a stiff brush, never use wire. All other orifices can be blown through with an air line from a foot pump at most. There is a small fine filter in the inlet which should be removed and cleaned, but other than that, there is not much more to it, other than to re-assemble.

When removing the pilot mixture screw from the side of the carb, first screw in until it seats fully (no excessive force please!), and note how many turns and part turns it takes. This will allow you to replace it at exactly the same point when re-assembling after a clean and blow through.

The gasket between the carb top and the body should be complete and untorn. Replace if damaged. It needs no gasket cement of any kind.

Oh! And check the butterfly spindles for wear. If badly worn they will affect tickover as too much air will be drawn through when worn. Drilling and re-sleeving can be done, or even shimming them up (takes ingenuity). You can test to see if any wear affects tickover by spraying WD40 on the spindle. If the tickover increases, they are in need of attention. Also - make sure the base gasket is not leaking air, symptoms of a leak there will be popping in the exhaust on over-run.

There is an electrical connection to a fuel cut off valve at the front of the Weber. This cuts off fuel when the ignition is switched off. A solenoid within opens the valve when switched on. It can be heard to 'click' with ignition on, and the feed wire disconnected, or someone to switch the ignition on and off.
Top
Messages: 8 • Page 1 of 1