Interesting, I will definitely be after a test ride when it's available. A diagram says a lot more to me than a page of writing, I'll be looking for one now.
Don't like the name Citroën Advanced Comfort, or CAC for short.
Top

I like the idea that it will be available on the smaller cars, but I have doubts about the ability of a system without height correction to deliver controlled comfort over a range of load conditions.
Top

xantia_v6 wrote:I have doubts about the ability of a system without height correction to deliver controlled comfort over a range of load conditions.

Very true, I carry a range of weights and don't like the idea of losing the self levelling rear.

I didn't notice the photo album at the top earlier. It seems that this new system may just be 2 stage dampers and softer springs. I'll definitely still want to try one but I'm sceptical it'll be replacing hydro as "Citroen suspension" for me.
Top

Yep...."twin power" damping by the look of it.....fails for me on self levelling and load carry capability if so.....
Top

A clickable link since autocar decided to use quotes in the URL.

It all sounds unnecessarily complicated. If it's about saving costs then just get an off the shelf system.
Top

Why have they tried to reinvent the wheel?
Top

“We set out to achieve suspension characteristics as close as we could get to the hydraulic suspension so many people have grown to love."

Translation - Hydraulic suspension cost us too much to make so we're trying to come up with something that is a lot cheaper and "almost as good". Hmm... somehow I'm not convinced.

Here's another mention, although it doesn't really get into any details:

I haven't seen any technical details yet (and we all know how the press can mangle technical details in their descriptions) but how does this system differ from the typical air bag assist systems like the rear of the C4 Picasso ? It's not that different is it ?

Has anyone found any technical diagrams or other hard facts ?
Top

There is an image of some sort of hydraulic ram or damper in this article:

It's a bit hard to work it exactly what it is from that though, as it could be a powered ram like those in Hydro-pneumatic (but coupled to the conventional spring as an "assist", not carrying the full load) or it could just be a hydraulic shock absorber with an external control loop. Looks more like a shock absorber to me. Still need more details...

So, a variable (maybe a clever one) damper.....woppie poo
Top

Yeah, underwhelming if it is only progressive damping. Found some much better pictures of the "hydraulic unit", but still not really any technical details:

Not that you'll learn a great deal more, but a Citroen press release regarding their CAC(k) programme can be found here.....

I originally interpreted the media as saying the system was akin to the airbag dampers but hydraulic. I thought this because the word bumpstop immediately had me thinking of the little rubber ones external to dampers.

On rereading the article I convinced myself CAC is simply dual rate dampers and soft springs. This picture looks like evidence of this at a glance and I didn't analyse it too much. 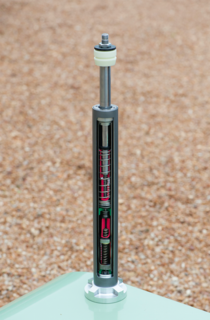 "The operating principle is simple but the result impressive. Whereas a conventional suspension system comprises a shock absorber, a spring and a mechanical stop, Citroën's system adds two hydraulic stops – one for rebound and one for compression – on either side. In this way, the suspension functions in two stages depending on input:


in cases of slight compression and rebound, the spring and shock absorber work together to control vertical movement without needing the hydraulic cushions. However, these stops endow the vehicle with greater freedom of articulation to deliver a "flying carpet" effect, creating the impression that the car is flying over any bumps and dips in the road;
in cases of more significant compression and rebound, the spring and shock absorber work together, bringing in the compression or rebound hydraulic cushions at the end of travel. These stops gradually slow the movement down more strongly to avoid quick stops at the end. Unlike a conventional mechanical stop, which absorbs the energy then partially returns it, the hydraulic cushion absorbs and dissipates the energy. As a result, there is no rebound."

I began to realise it is a take on a2 stage damping system, with the 2nd stages replacing the bumpstops. Weather Citroen are using a rising rate damping or 2 separate rates is unclear, but in the tradition of Hydractive I expect dual rather than rising rates. It reminds me of my Manitou Mars 1 Mtb Fork from 2001 which used the same principle over the standard (elastomer stopped) Mars fork to prevent topping out.
Top
Messages: 17