How many AA Boxes are left in the Country?

Well there are 19, eight of which are grade II listed include this particularly nice one 746, which I reversed back to, got out of the car and took a photo of on our holidays! 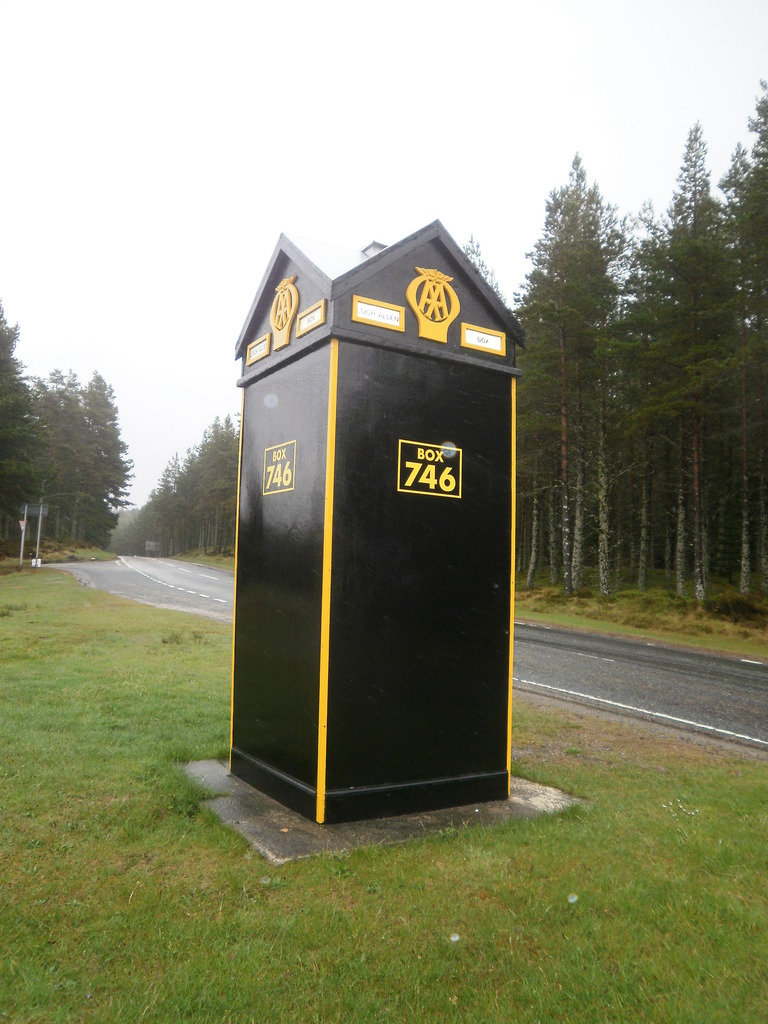 Could there be any near you? Do you have a picture in your holiday snaps of an AA box...or is it just me?

Here's the full list
137 Porlock, Somerset: on A39 (Dunster-Lynton) at junction with New Road
161 Nantyffin, Crickhowell, Powys: on A40 (Abergavenny-Brecon) at junction with Talgarth A479
289 Devil’s Bridge, Ceredigion: at junction with A4120 (Devil’s Bridge-Ponterwyd) and Cwmystwyth B4574
372 Mere Corner, Cheshire: on A556 at junction with A50
442 Aysgarth, North Yorkshire: on A684 (Aysgarth-Leyburn) near junction with Buckden B6160
456 Halfway House, Newton Poppleford, Devon: on A3052 (Exeter-Sidmouth) at junction with B3180
472 Cambus o’ May, Aberdeenshire: on A93 (Aberdeen-Braemar) near junction with Strathdon A97
487 Dunmail Raise, Grasmere, Cumbria: on A591 (Grasmere-Keswick) at Raise House south of Thirlmere
504 Ardgay, Highland: at junction of A836 (Bonar Bridge-Tarlogie) and B9176
530 Brancaster, Norfolk: on A149 (Hunstanton-Wells) around 300 metres west of junction with Common Lane, Brancaster Staithe
573 Garrowbay, East Riding of Yorkshire: on A166 (Driffield-York), 4.5 miles east of York, opposite entrance to Garrowby Hall
580 Boduan, Gwynedd: on A497 (Nefyn-Pwllheli) around 1 mile south of junction with B4354
631 Brachla, Highland: on A82 (Fort Augustus-Inverness) around 4 miles north of Drumnadrochit
687 Trinity, Jersey: at junction of Rue du Presbytere and Rue des Picots, Trinity
714 Threapland, Elgin, Moray: on A96 (Elgin-Fochabers) east of junction with B9103, Threapland Wood, 3.5 miles west of Fochabers
723 Cappercleuch, Borders: at St. Mary’s Loch on the A708 (Moffat-Selkirk)
746 Loch Allen, Dava, Highland: at junction of A940 and A939 (Grantown on Spey-Nairn), south of Forres
753 Glen Dye, Strachan, Aberdeenshire: between Bridge of Dye and Strachan on B974 at junction with Old Military Road
817 Beadnell, Northumberland: on B1340 (Alnwick-Bamburgh), quarter of a mile north of Beadnell

I'll have to take my camera down to Beadnell at least, and must have driven past the one at Dunmail Rise near Grasmere without noticing it when we stopped off in the Lakes on our way home from North Wales.

..and I'm sure the question on everyone's lips...how many Roadside (ie in the wild) RAC Boxes are left?

...none! unless you know different...

and just as an aside 100 points for the first person to claim to still be in posession of an RAC/AA Key for the boxes....photographic evidence would be nice but I think a simple delcaration would be enough. 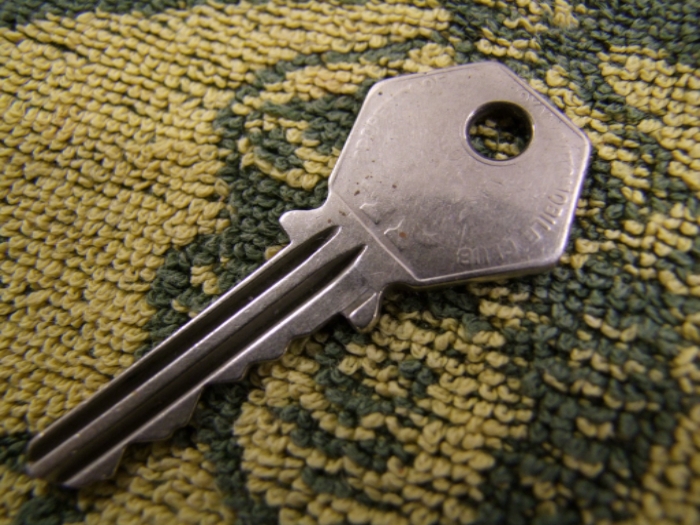 (Did, though do a 27-year run with the RAC, but that's what happens when you run a lot of Rovers and BL stuff...)

Ah, I was just in the process of posting this up and you come up with the 6-sided bow.....brilliant! Well deserved 100 points, never expected that!


...the fascinating world of AA Keys, so we have in order of appearance, a circa 1908 item where the AA boxes were in Hotel Foyers, a fancy 1920's key, the Six Sided Bow which also opened RAC boxes, and the familiar Lozenge shaped bow,

white exec wrote:Sorry Neil, but my name is Amelia Fritton, and I claim the 100 points . . .

Haven't worked that out yet...

I think she was just good at claiming rewards (The Great St.Trinian's Train Robbery, iirc).
Top

My Mum was in the original "The Belles of St Trinian's". She was the young girl who rode 'Arab Boy' the race horse up the main stairs. It was lucky she was in the area, otherwise they could not have filmed the scene. The director has assumed that (being there was a large cast of girls) one of the cast would have been able to ride a horse. Unfortunately none of the girls could ride a horse (or, at least, not well enough for that scene), and this caused a little consternation. However, somebody then noticed that, in a nearby field, there was a young girl (Mum, aged 9yrs) taking a large horse at speed over some quite imposing jumps. Somebody headed over and asked Mum if she wanted to be in a film. She checked with her Mum, got permission, and the scene was shot (I don't know how many takes, but probably not many).
Top

Gosh - I will look at that film with fresh eyes now, James.
All the original St.T films are on the shelf here, along with a good few old Ealing Studios titles.

PS Does she still have the gymslip?

Not likely, as she now lives on a 45' narrow boat with somewhat limited space for storage. The narrow boat is named "The Black Cat", and is called this after the book that paid for it. She has had 6 books published, mainly dark psychological thrillers. Her name is Jenny Maxwell. Sorry, unashamed plug warning; 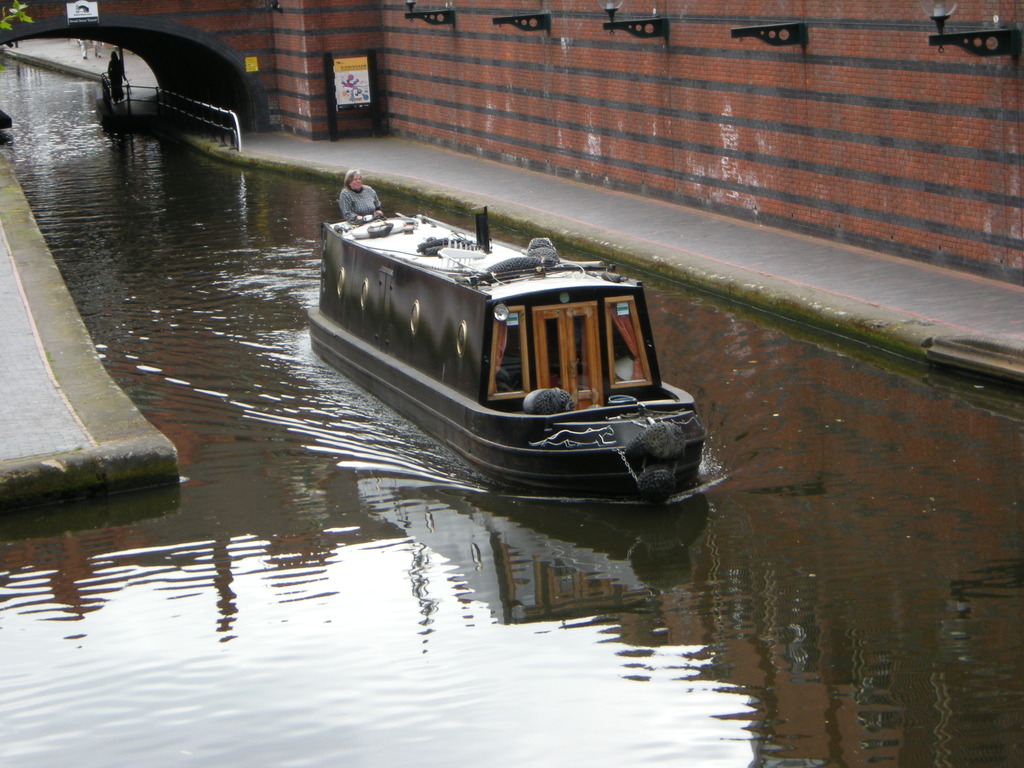 Re: Trivia and curiosity-Have you ever asked yourself....?

Hell Razor5543 wrote:Not likely, as she now lives on a 45' narrow boat with somewhat limited space for storage. The narrow boat is named "The Black Cat", and is called this after the book that paid for it......

I like the sound of that.....all credit to your Mum James

At school I always remember my English teacher writing her comments at the end of my "compositions" well before Nike coined the phrase..."Just do it Neil!"...as well as the usual "get rid of that biro!".

...and the story was about.....going to the Highlands of Scotland, in woods by the shore of a Loch teeming with fish, and building my own log cabin! Never mentioned planning permission, or negotiating the purchase of the land once!

On the way back down from Eyemouth today, made a detour off the A1 to Beadnell on the Northumberland Coast, and after a bit of systematic searching found AA Box number 817 hiding in the trees. Strangely enough there was a fair glow of satisfaction and a touch of boyish pleasure at finding 817, amusement at myself actually making a detour purely for the purpose of finding and photographing it. Maybe I should start watching the telly again before this type of thing becomes a regular occurence. 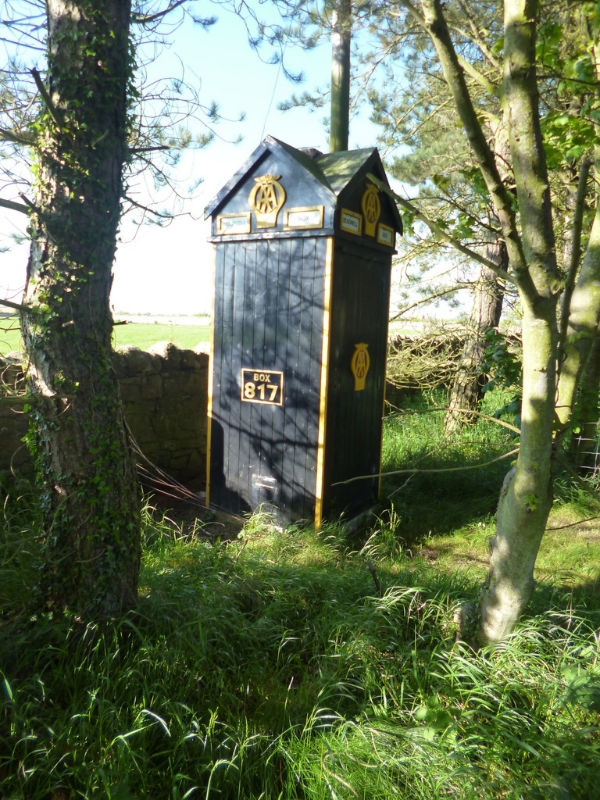 Are these still operational, Neil?
Top

I would very much doubt it Chris, but I don't know for sure although 817 does have a telegraph pole at the side of it. Some of the boxes are listed buildings, and the others maybe just a pure curiosity.

There looks to be a wire coming down from the telegraph pole to the box.
Top

NewcastleFalcon wrote:On the way back down from Eyemouth today, made a detour off the A1 to Beadnell on the Northumberland Coast, and after a bit of systematic searching found AA Box number 817 hiding in the trees. Strangely enough there was a fair glow of satisfaction and a touch of boyish pleasure at finding 817, amusement at myself actually making a detour purely for the purpose of finding and photographing it. Maybe I should start watching the telly again before this type of thing becomes a regular occurence.

A good few years ago I used to do a similar thing in my trusty old Xantia. I used to track down the occasional Royal Observer Corps nuclear monitoring post around the country. There are a great deal more of them still standing than the AA boxes though - over 1500 were built and many still survive

Neil, you were within a few hundred metres of one on your dolphin watching visit on the Moray Firth ! I used to think of it as a treasure hunt with a purpose - it'd be a good excuse to visit a part of the country or some country lane or some scenic bit of countryside I'd never normally go to, and there was a bit of satisfaction to be gained from finding the place, even more so if I could get into it