.....irritating to say the least. Are glow plugs, and their tips, these days not what they used to be? or is it Glow plugs in DI engines which are the problem. I know the ones on Luton's finest are right pains to remove intact as well. First time its happened to me in over 35 years of motoring.

To recap back in December I managed to ressurrect the Picasso after a dip into some floodwater by removing the glow plugs and ejecting water from the cylinders. This was at the price of 2 of the 4 glow plugs snapping off at the tip in spite of very careful removal.

So the ticking time bomb has been there, but 5000 odd miles trouble free motoring came to a sudden end when one of the tips decided it was the moment to work itself loose and drop into the cylinder at the clutch end of the engine.

I thought something had got caught up underneath the car, pulled over and found the engine shaking about and running "rough". Wasn't in a particularly safe position so as it was running decided to carry on a bit further to pull over somewhere safer. 30 miles later and I'm back home, with the car seemingly running and pulling not noticably any different at speeds of 60 mph. Not much engine rocking at idle when I stopped, and revved quite freely.

Maybe I got away with it? I don't think so. Rough running at start up, plenty of smoke, remove the oil filler cap when running and plenty of smoke puffing out. Thing is once it gets a run, there is no noticable problem, revs freely, pulls well, no nasty noises, no smoke.

I imagine the glow plug tip has caused some damage to cylinder number 4...piston/valves/injector/head/rocker arms....but it effectively runs on 3 cylinders. I wonder if the tip has exited the exhaust valve/turbo/cat/exhaust. The noise when it first happened certainly gave me the impression that something was pinging underneath the car.

Hardly touched the Picasso with a socket set as yet, but intend to remove the rocker cover to see if there is any obvious damage. I think if it needs anything more than replacement of rocker arms on cylinder no 4, then its maybe new car time. I do like the Picasso, suits our needs really well, and it will be disappointing if a stupid little glow plug has annhilated a very nice car.

I think you have been unlucky. Apart from sticking and carbon build up on 16 valve engines, there seems no real problems on 2.0hdi 8v.
Apart from a dodgy manufacturing issue on a plug tip, the only other thing to destroy a plug, is a worn pattern spray from injector, or possibly the heat cycle staying on for extreme periods of time.
It is a pity that a seemingly small thing is going to mean major spannering.
Top

Thanks Lexi, In my case its not so much of an intact plug disintegrating in situ, its a couple of tips broken off and stuck when removing them. With the HDi engine for most of the year glow plugs are an irrelevance and "maintenance free" but if you ever have an occasion to remove them....I would urge extreme caution and don't do it unless its absolutely essential. The consequences of a broken off tip are out of all proportion.

Up to now, I have never given glow plugs a thought, as to being a problem....apart from access etc. On all diesel vehicles I have ever had up to now you just unscrew them, take them out and replace them.

No elaborate pre-preparation over a period of a week before you attempt to remove them dousing them with various lubricants/solvents, and no tender care with the socket set other than a straight anti-clockwise removal motion. No ensuring the engine is warmed up first. No backwards and forwards cycles to ease their passage from their bores.

So what's the route of the problem? Glow plugs not actually being used in all but the coldest weather, the glow plug poking into the combustion chamber directly perhaps, heads made out of anything else than cast iron, and long glow plugs and thin tips.

From what I've read injector removal on HDi engines is even worse. I may have considered this to be the next investigative step after removing the rocker cover, and examining any damage revealed, short of head-removal...but have come to the conclusion that is not even worth attempting.

Just in case someone with similar glow plug tip snapping off problems stumbles across the thread, I have found a couple of posts on a Peugeot forum which may be helpful. From my experience....the car will work fine with the snapped off tips in situ for period of time but eventually they will drop out and wreak their havoc.


on changing the glow plugs the last one snapped (always the last one right by the pump) leaving an inch of electrode in the car. So what to do

option 1
sell up and walk away
(always fancied a mini)

option 7
strip the head myself (cold wet icy, garage full, to much work on etc)

Maybe the best option is to find a local garage/professional with the right equipment to get the glow plug tips out and pay to have it done. Clearly it can be successfuly done without removing the cylinder head by a person with the right tools and expertese, and the price will be well worth paying rather than ignoring it as I have done

The problems started with alloy heads, pencil type plugs or both. My thinking is to change them about 4yrs. If they are not taken out, they can give the bother the longer they are in there. I replaced mine a few month back. Doused in plus gas for a few days before. Then removed after a long run. Got them out ok but you could hear the threads squeak. Put new ones back in with anti seize grease.
I think the plugs do more than is credited. Easy and clean starting, then post heat, in those cold months means less wear on everything in the starting and combustion circuit. Un burnt fuel and soot is not kind to cat converter either.
Top

lexi wrote:Put new ones back in with anti seize grease.

Yes, I always refit glowplugs with a smear of copaslip grease applied to the threads
Top 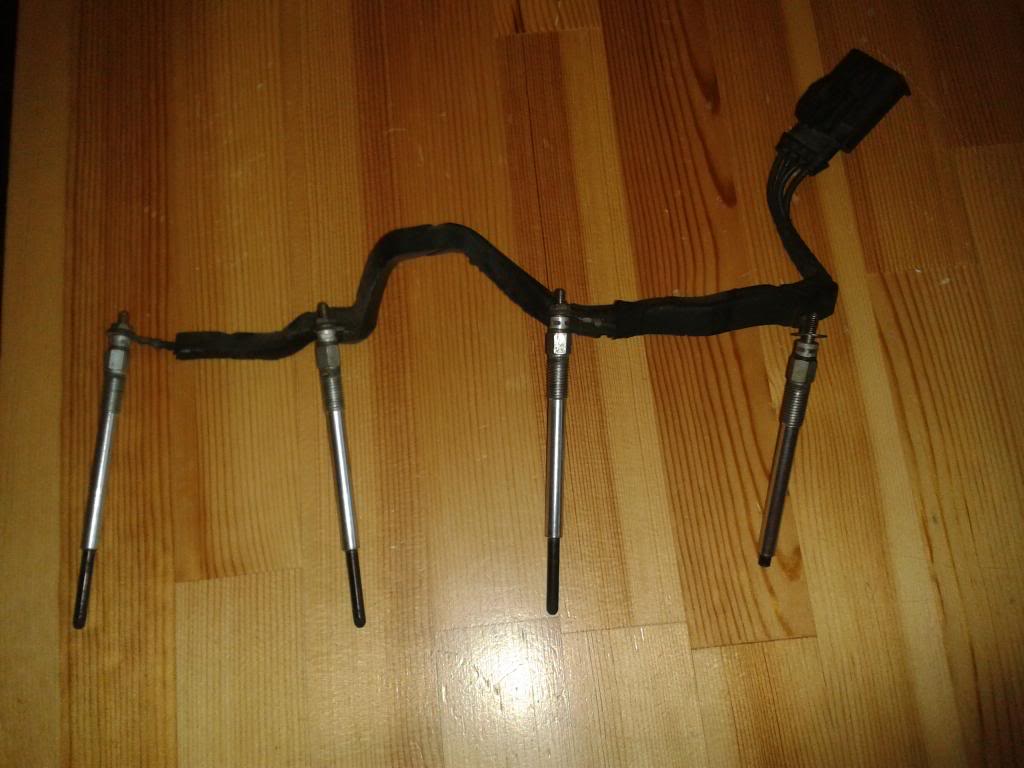 As for my own initial assessment of not even bothering to try to remove the injectors my research has concluded that injector removal....on certain HDi engines is regarded as being virtually impossible (2.2HDi for one which also makes head removal on that particular engine also virtually impossible).

Got the injectors out of my 2.0 HDi 8V 160k Xantia when I scrapped it not bother- just remove the clamps and give them a wiggle and out they come. They're not excessively long and thin like the 16V ones that go right down through the head. It would seem that yours has scored the bore or something though, given it's heavy breathing habit. You might be able to get a borescope in there to have a look though if you get the injector out.
Top

Just been out to survey the scene of the Xsara Picasso 2.0HDi Engine bay.

Getting the injector out, yes I can see thats do-able providing it hasn't welded itself in place. New pipe required on re-assembly?

As for the ultimate diagnostic test, getting the head off with the engine in situ, Haynes estimates 5 spanners, and I would think they are being optimistic.....there is absolutely no room whatever at the back of the engine (from the top and very probably from the bottom) to do any sort of manifold removal.

When it happened, I sort of knew what it was. The likeliest moment at which is was drawn out of it's previously stuck position, would have been on the "combustion stroke" sucking it out at a rate of knots, and on the exhaust stroke shooting it out of the cylinder "though" the exhaust valve (maybe even literally) and onwards via the turbo/cat/exhaust wreaking a range of havoc as it went. I may be imagining it but I'm sure the "pinging" made its way under the car.

The head needs to come off for a proper decision at whether to write-off or repair. Anyone done it on a Xsara Picasso 2.0HDi? At the moment, I can't see me getting anywhere near the inlet and exhaust manifold bolts/nuts to get them off, unless when its up on ramps and you attack it from underneath the space needed is miraculaously revealed

Citroen procedure shows removal in place. Subframe off, then turbo off. 12.6 hours....!!
Top

RichardW wrote:Citroen procedure shows removal in place. Subframe off, then turbo off. 12.6 hours....!!

Done most things on cars over the years, but I am begining to recognise my limitations now! I must admit I don't fancy that! "Turbo off" translates into "a nightmare of sheared bolts"

My Picasso has air conditioning and there's pipes ever-y-where!

Its in the boot as well....(Renault Floride like my avatar)

...Nothing obvious wrong under the rocker cover no breakage of "rocker" arms, although to be honest didnt see anthing I would have described as "rocker arms" at all just the intact camshaft in its "bearing caps" with two 10mm nuts either side.

I'm going for the slightly blurred style of photography these days 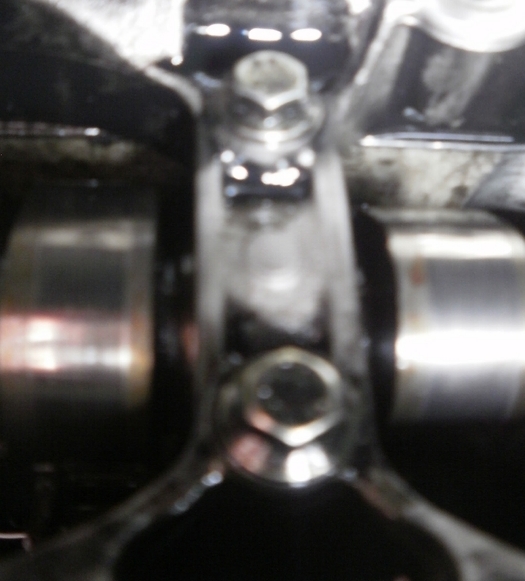 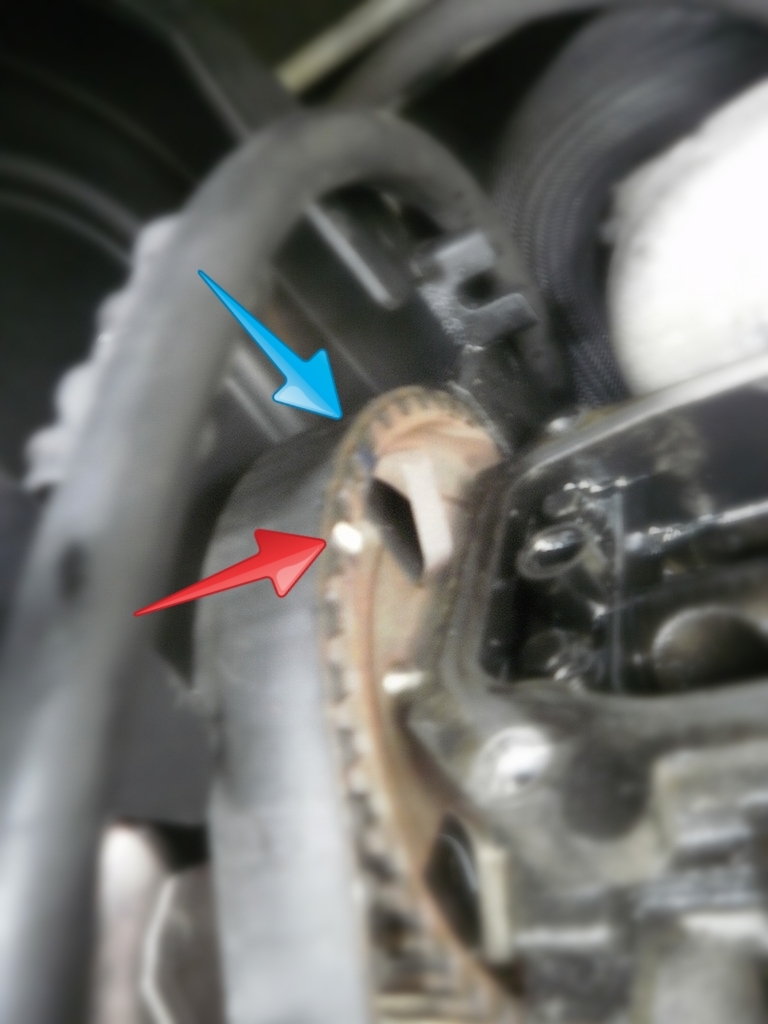 ....oh and just to confirm my current pretty rusty one-spanner status as a D.I.Y. mechanic, my rocker cover is now in two bits. One of the pretty soft and shallow torx "sockets" on the head of one of the bolts at the back of the engine deformed itself into an unextractable round hole, so brute force broke the rocker cover, and the offending bolt was removed with mole grips.