When I got the car, operation of the motorised boot was intermittent. It worked for some time after a reset of the BSI and stopped working all together after few months.
DIagBox does not see any communication with the boot ECU, which as I assume correctly is attached to the motor lift unit.
Having a wiring diagram I decided to check cables, but I think there is a problem with the diagram.
Could I please therefore ask someone to check wiring diagram for the motorised boot and check connection between grey plug (16V GR - pin 2) and boot ECU (pin 15), as those seems to be incorrect.
Any other suggestions would also be appreciated.
I suspect it's not the ECO mode as the boot does not connect nor operate in any conditions now.
ORGA: 11440
ORT: CJ
Estate
ABS / asr - yes
Engine 2.2 HDI
Top

I've got the SEDRE Wiring diagrams up and can see the connections you mention - but not sure what you want checking? I assume you have the same? From the BSI, 16V GR goes to Pin 15 of the 6290 Boot Maneuvering unit as you say, however I can't determine what B080F or B080 are in the lookup! They don't exist. If I try an '8' instead of a 'B' 8080, it comes up as air conditioning compressor authorisation input. Have you checked the initiallisation procedure for the tailgate? It is meant to retain settings when battery is disconnected but just a thought.

Just another thought - there have been reports of other Tourer owners with the motorised tailgate not work / or intermittent issues. This in many cases was a lack of reserve electrical power to operate it (economy mode), Others said that a software upgrade fixed the issue. Might be worth checking any of these out.

Not sure if it's any use, but I've also cobbed this from a bulletin:
Motorised boot unit
(BCM)
A new multiplex computer on the CAN LS
Bodywork network enables the motorised
boot lid to be controlled on the estate
version.
● Opening angle memorisation
The customer can program the opening
angle of the lid.
In the event of automatic opening, the lid
will not exceed the pre-set angle.
In the event of manual opening, the angle
limitation function is not operational.
The diagnostic tool can erase the
personalised position used by the
motorised lid.
● Programming the motorised boot unit
The diagnostic tool contains all information
and requests which enable the ECU to be
programmed and “deprogrammed” with the
mechanical limits of the lid to which it is
fitted.
The programming must be carried out then
carried out again if work is carried out on
the system (replacement of the movement
mechanism, replacement of the electronic
unit etc.).
● Motorised boot unit diagnostics
The ECU can diagnose a fault or an open
circuit on the anti-pinch contacts, a faulty
position sensor, a jammed or faulty contact,
Diagnostics for the
new C5 an electronic or engine fault, out-of-range
voltage, faults on the CAN network and a
fault on the striker panel.
Top

Thanks for prompt reply. Yes, that's what I'm looking at.
According to the wiring diagram pin 2 of the 16V GR plug (B080) on the BSI unit is connected to the pin 15 on the white boot ECU 6290 (16V BA), cable B080F.
Wire on the grey plug is blue and is marked with a different cable number (can't remember now), whereas pin 15 is yellow, but I can't check the cable number.
That's why I assume there must be a mistake or I'm looking for the wrong cable.
What's the best way to upload photos here, so that I can show you both plugs.

With the ECO mode, I heard two versions; one stating that boot will open when the engine is running, other that the boot ECU has got it's own system to check battery and will not open.
This would however not explain why DB can't see the ECU module at all, unless it won't communicate.
Battery is 6 months old but it's too big for what Citroen is specifying so I can't change values in the DB to show correct amperage.
Top

To upload images, you need an image hosting service like Photobucket or imageshack - here's a Forum post on this:
http://www.frenchcarforum.co.uk/forum/v ... hp?t=35470

If you can get some pics -I'm sure some members with motorised tailgates can have a look for you.
Top

My boot will NOT open in Eco mode with the engine switched OFF or With Ignition on but Not started..
As soon as I start the car it WILL open.
Top

I will try to upload photos later.
Mine does not work at all. Nothing when the engine is running or if it's not in the ECO mode. None, nada. Few months ago it was working intermittently after BSI reset but stopped later. The only thing linked was new battery, but if this would be an issue, it would work with engine running.
Battery installed is 81 Ah.
Top

All photos attached.
FIrst one shown the wiring diagram with connection in question highlighted.
Second shows the grey plug with pin 2 highlighted.
Third and forth is of the boot ECU showing pin 15.
Am I missing something or is there an error on this diagram? 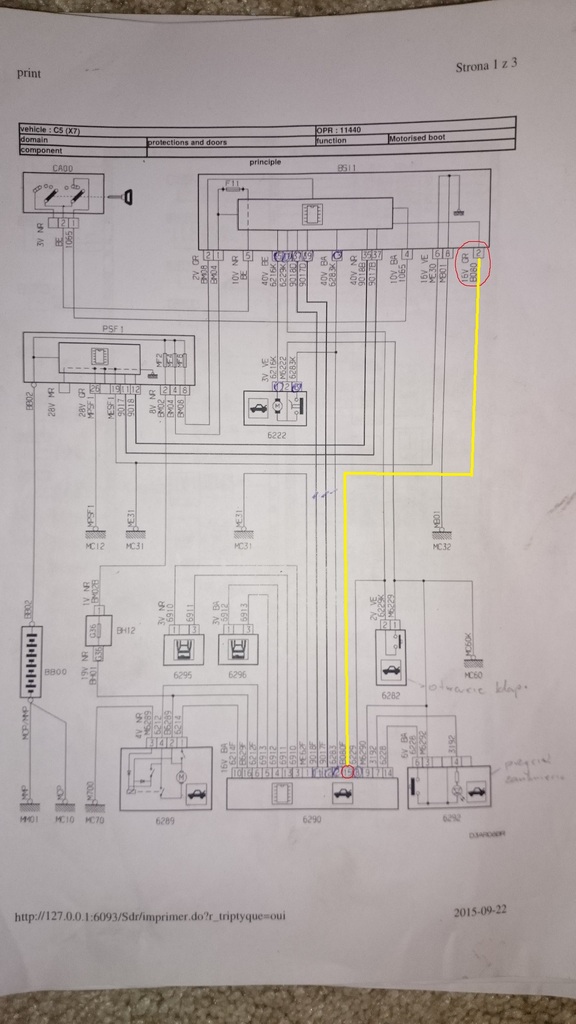 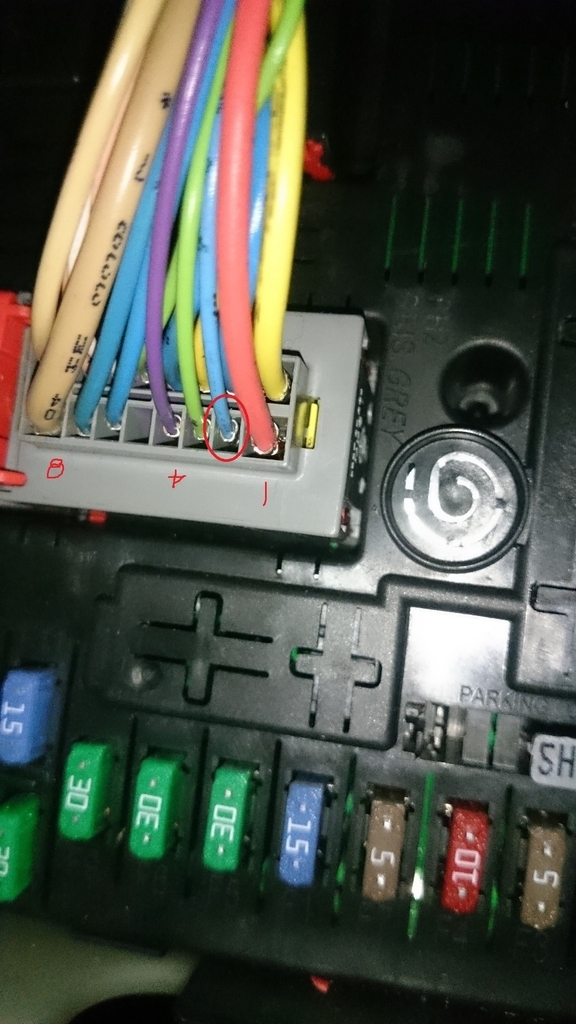 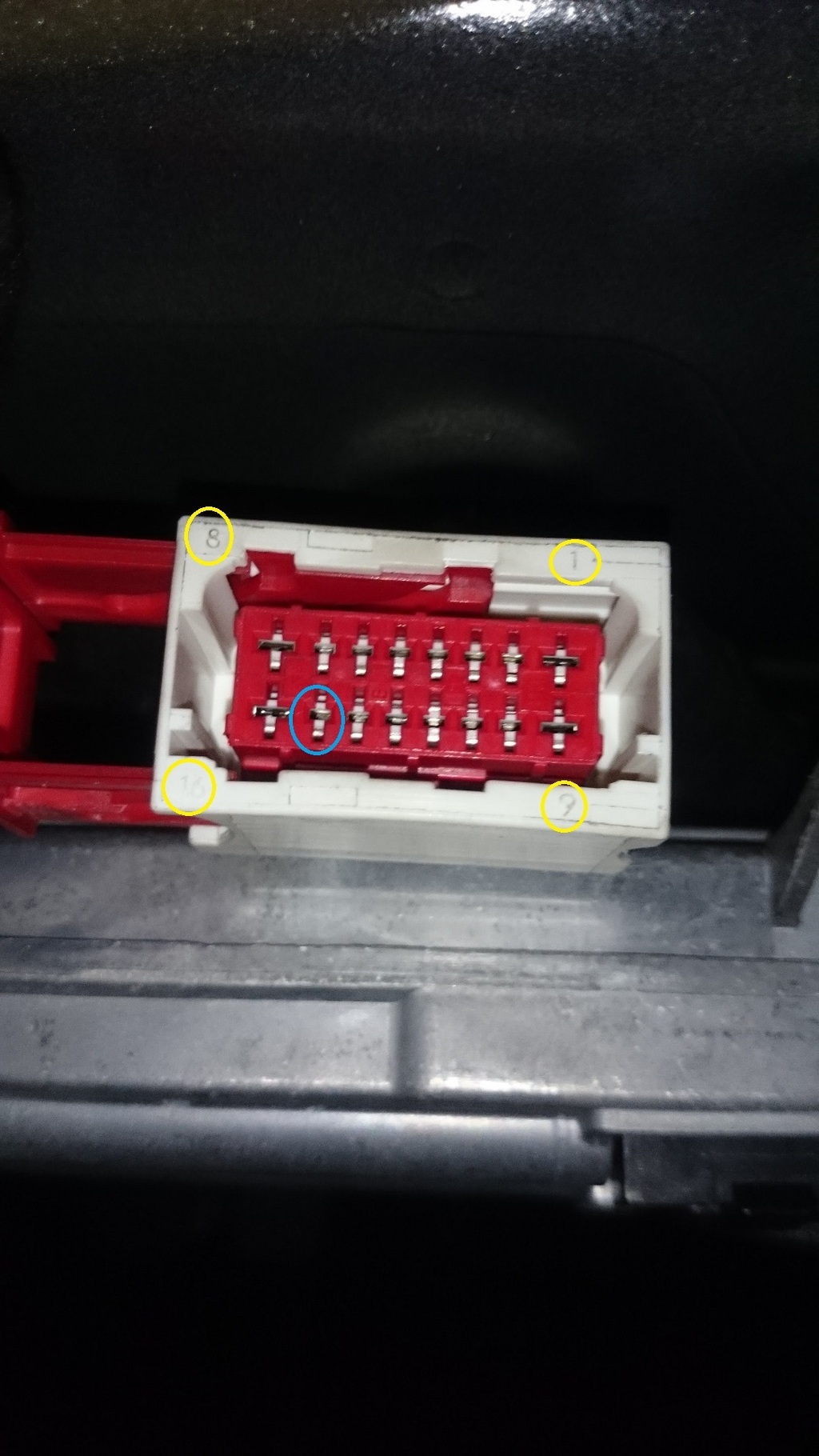 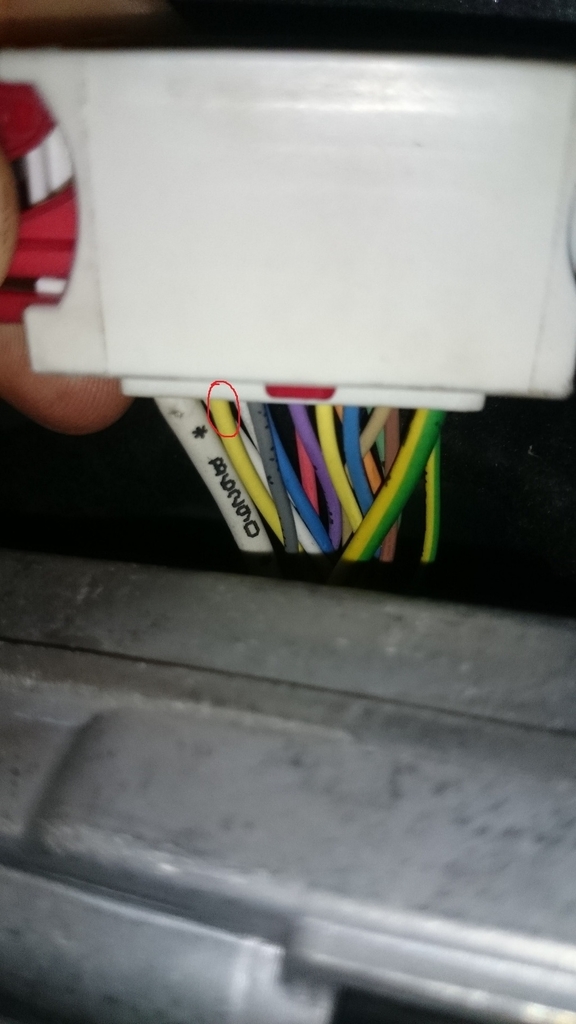 Well I'm confused - are you sure this is the right BSI plug? According to the wiring diagram, wire 1065 (ignition on input) is supposed to be a 10V BA (Blanc / White) wire in Pin 4 and you have a purple one showing in the Pic??
Top

Marc - white plug (photo 3 and 4) is of the boot motor (16V BA, unit 6290).
As you can see pins 2 on the grey plug and 15 on the white one have different colours.
I'm checking main power, communication and ground wires between the boot ECU and BSI as both units don't communicate.

Plug 10V BA you are referring to is not shown here but according to other photos of the BSI, the forth pin in this plug is purple.
Top

Archi - I've got that the 3rd and 4th photo are of the boot motor - no probs - I was looking at the second photo of the BSI plug - the fourth wire there in pin 4 is purple - yet in the wiring diagram (3 to the left at the top of your yellow mark in photo 1) it shows a 10V BA 1065 wire supposed to be there unless I've completely lost the plot!

Marc, the 10V BA is a white 5 pin plug, not grey and it's not shown on the photo.
This is the 10V BA plug. Pin 4 is purple.
Are cable colours shown in SEDRE? It would be great if voltages would be available to check power supply. 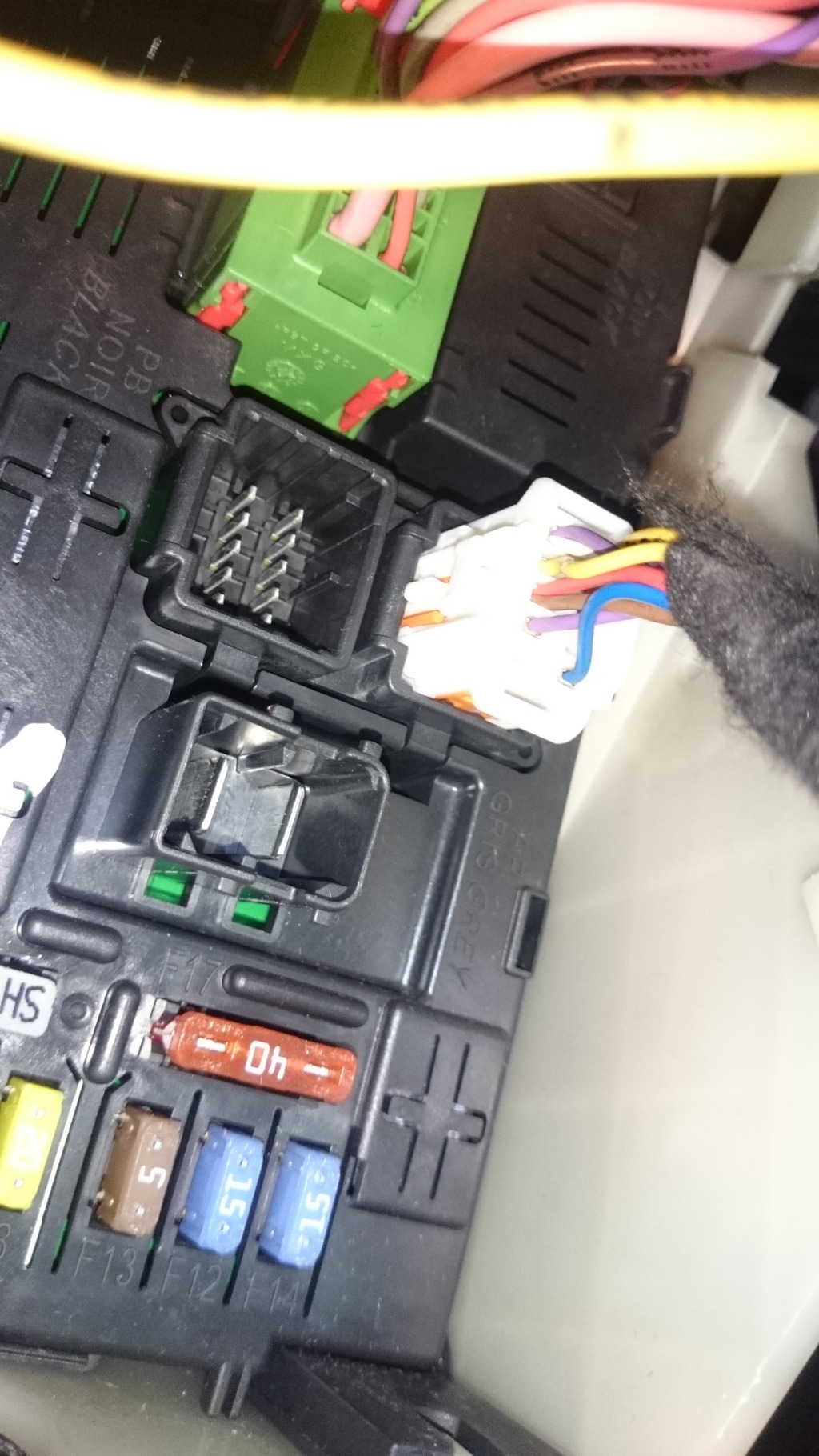 Yes, I can see now - The diagrams aren't in colour, and there are no voltages that I can see. If you like I can send the Diagrams through to you as a PDF (Wiring Diagram, Installation & Principle) if that helps? Just drop me Private Message with an email and I'll have them over in 2 minutes.
Top

if you're having trouble with the wiring.......just wait until you take the motor/assembly apart

mine didn't stop working but i had to replace the struts and the ends disappeared inside housing. however it now doesn't have the 2 handed manual 'break' to close it when in Eco mode
Top

Marc - thanks for diagrams. Yours is the same, so it seems there is an error. Since this is a Battery cable (power supply) so I will try to find it on the BSI unit.
Old'uns - I have already disassembled the unit and there is nothing special about it. Well unless you know how to put all gears together

What do you mean by the EcoMode? Is there a trick to by pass this feature for the boot opener to work every time?
Top

No Problems - maybe Jacque in the factory was having a bad wire day when he put that loom together!