It's a long time since I've been on here, as my daily driver Activa has been running pretty smoothly and last year all my tinkering was focused on the '68 DS instead.

This year, after a mate had a cambelt go on his car I decided to do a "paranoia" belt change on the Activa. A week later, the challenge I'm still facing is that the cam and crank pulley locking holes don't line up at the same time. They're not a little bit out (and no, they're not 180/360° out...

). With the crank pulley pinned, the cam pulley is (very) approx 90° before or after it's lock pin position. Whoever last did the cambelt has paint-marked the cam sprocket and cam cover, and that can be made to almost line up when the crank pulley is pinned.

"Right", I thought with much confidence... "They've probably lost the cam pulley to shaft locating pin, timed the cam and crank manually with a DTI on a follower and nipped up the cam pulley bolt". But contrary to the Haynes, it's not a pin, it's a forged-in feature of the cam sprocket and it was very much still there.

"In that case, it must be a pattern crank pulley", I figured, "with the lock pin hole in the wrong place relative to the keyway". So I went off and ordered a new genuine crank pulley/T-V damper (£120 inc vat, that'll be why it's pattern...).

After a week-long wait for the special order, I collected the new crank pulley this evening... And it looks exactly like the old one.

I'm stumped. I'm fairly confident the cam timing hasn't been 180° out for the last 40k miles or so, as I've barely had to replace any valves or pistons...

Has anyone got any idea what's going on? Has my engine got the wrong camshaft in it?

I'd like to sort it, as the camshaft doesn't stay "balanced" in the paint marked position, so the closest we can get it is one tooth out (which is where it was when we started).
Top

I've barely had to replace any valves or pistons

no idea dan.. strange one for sure..
you say the sprocket seems 90° out, but you also say the timing was 1 tooth out with old belt on? I not sure I follow how the latter can be checked without the former being locked into position?

I wonder if there is a second/different locking hole in the head as with some other PSA engines? a long stretch but all I can think of right now

or.. the crank locking isn't using the right hole - assuming the flywheel is the locking method? (but your post says crank pulley is locked, not flywheel,, so ignore that)
I haven't worked on this engine before so not much use to you really..
John
Top

Yeah it's very strange. I should have taken lots of photos whilst it was all apart with the covers off, but I thought I'd guessed the problem....

Yes, with the crank pinned via the hole in the pulley, the cam sprocket is (very approximately) either 90° ahead of or past its pinning point. As it's impossible to line up both the cam and crank with their locking points, all I can go off is the paint marks someone else has put on the cam sprocket and cam cover which almost line up with the crank pinned - it looks about a tooth out. When we slipped the belt off we realised why that is - the cam doesn't naturally stay in the position of the paint marks, it wants to spring forward a quarter turn or so. So the only way to get a belt on with the engine in that state is to rotate the cam back a bit so it'll stay put long enough to get the belt on - and then the paint marks end up about a tooth away from each other with the crank still pinned. That's how its been running the whole time I've owned it and for goodness knows how long before that, so it's not a disaster, but it's not what I had in mind when I started out on this task!

My guess initially was that the crank pulley pin hole should either line up with or be opposite the keyway, which is how it looks on service.Citroen.com, but not what the old or new pulleys look like...

May end up trying to approximately find tdc with a teaspoon in a plug hole at this rate!
Top

they are just not aware of the post.. I cant believe you need the paint marks, which are sprung against your favour...
interesting your last point though.. you cannot have two pulleys for a different engine..surely..
google the engine, as images? see if you can get a sideview maybe? hopefully tomorrow someone who has fitted a belt to an activa will remember how they did it

The crank pulley is 2-part, and the timing hole is in the outer part.... If the pulley slips (and they always do), then the timing hole goes AWOL - well known on this engine. If you fit the new pulley then it should be OK. Some folk (CitroJim I think for instance) have got a solid pulley from an older car to fit during belt changes for just this reason.
Top

Personally I'd not even trust a brand-new pulley...


RichardW wrote: Some folk (CitroJim I think for instance) have got a solid pulley from an older car to fit during belt changes for just this reason.

Any XU engine with a solid pulley will be a perfect donor...
Top

Richard, Jim, many thanks gents and apologies for taking so long to respond, that's really helpful information.

I don't suppose that solid XU5 pulley it's somewhere to hand is it? A photo showing the orientation of the key-way and timing lock pin hole on that would make a really useful sanity check!

I'll pull it all to bits again this weekend and if it still makes no sense I'll take some photos this time!

Thanks again for your help guys, much appreciated...
Top

djadams wrote: I don't suppose that solid XU5 pulley it's somewhere to hand is it? A photo showing the orientation of the key-way and timing lock pin hole on that would make a really useful sanity check! 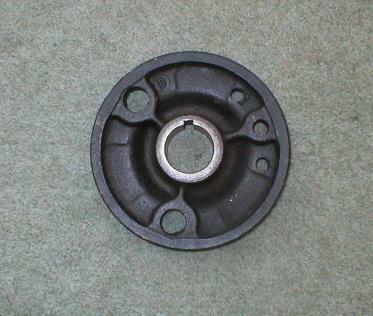 The timing hole is the middle one of the group of three about 70 degrees clockwise around from the keyway..

Thanks for the offer KP, and thanks for the pic Jim - that's brilliant. The keyway/lock pin hole relationship looks like the brand new genuine pulley I have. I must have mis-remembered the orientation of the timing hole relative to the keyway in the old pulley - it's probably slipped about 180°. That way the mental image I had of it as I turned it over in my hands and looked at it from front and back did look similar (particularly from the back...), but I guess the lock pin hole was actually the other side of the keyway, which would explain the cam being 90-ish° away from where it should be. I'll have a go with the new pulley (see if it lines up with the cam in it's lock pin position) and let you know how I get on...
Top
Messages: 10 • Page 1 of 1