Yes, I thought you meant only the spare had a sensor. As per the factory spec., TPMS wasn't fitted, so I suspect these are non-OEM aftermarket ones that have been fitted - but without the monitoring unit (usually dash mounted) they won't do much. The OEM ones would not be fitted if not part of the original trim / spec. due to cost, so I can't think of another reason apart from the aftermarket option or id the whole set of wheels were purchased to replace the originals, which may have had TPMS fitted - and then it would be an additional cost in time and money to remove these and fit normal valves. So they probably left them on knowing they wouldn't work without the receiver and the configuration.
Top

You'd think a tyre shop would be able to fit a battery, as most of them sell them.

Anything with the battery UNDER the back seat would confuse most folk these days.

All PSA models are very rare here, so a typical tyre fitter has probably never seen under the bonnet of anything with a layout like the 308. And it is difficult. The air intake resonator needs to be removed. Then the fuse tray above the battery cover must be unclipped and moved aside, but there is no visual cue as to how that is done, and it requires an amount of force that always feels near the breaking point of the plastic. Then the battery cover must be extracted in an awkward manoeuvre (not as difficult as getting it back into the right place).

The wheels on the car are genuine Peugeot of the type that this car was fitted with at the factory, and I believe that prior to my ownership it never had anything done except by the dealer.
Top

Anything with the battery UNDER the back seat would confuse most folk these days.

Loading VW T3 & 4 estates was also guaranteed to gain passing interest, if not a small crowd.

Here's the compartment it lives in - usually hidden under a plastic cover and with a thick sound deadening mat on the floor too.

Could fit a decent amount of stuff back there too.

The little hatch in the floor gives access to the gearbox oil filler/level cap (you dip it using the engine oil dipstick to check the level) and clutch slave cylinder adjustment.
Top

A few days ago, I noticed a few drops of coolant under the front of the 308...

It was not immediately obvious where it was coming from, it was near the front of the engine, which normally rules out the thermostat housing, which tends to drop coolant from the rear of the engine. Previously leaks near the front have been due to poor clamping of the hoses to the transmission oil cooler or the radiator.

I fitted my cooling system pressure tester and pumped it up to 1 bar, and sure enough, after a couple of minutes, coolant started dripping under the engine, but it was not clear where it was coming from. It was clearly not any of the previously mentioned parts, as it seemed to be dripping onto the catalytic converter lower mount from somewhere obscure higher up on the front face of the engine behind the turbocharger.

I got the job 75% done yesterday. I hope that the leak is fixed.
Top

I got it reassembled today, no great drama, but still an awkward job. As an aside, this version (the THP 156) does not actually have an oil cooler fitted, there is just a bypass plate that carries the oil and coolant from one side to the other with no real thermal coupling. The heat exchangers form the higher power variants would obviously bolt straight on.
Top

Six months later it is leaking again. This time it is the oil feed pipe to the turbo which is leaking at the top banjo. It is a very common failure point on these engines, but repair requires replacement of the pipe, as the failed o-ring is crimped inside the banjo to pipe joint.

The really annoying thing is that all the disassembly I did last time (heat shields, catalytic converter etc) has to be done again to access the bottom banjo on the pipe, allow 5 hours work.

The replacement will also fail in a few years because the top fitting gets too hot for the grade of o-ring that PSA use, not helped in our case because we live at the top of a reasonably steep hill and the turbo is always toasty hot when we switch off the engine after arriving home.

There are after-market hoses available (the best known is by Detroit Tuning) which eliminate the troublesome o-rings, but I am not sure that I can wait for a part to arrive from the USA.

I have temporarily wrapped the leaking joint with epoxy putty and will see how it fares over the weekend.
Top

It looks like the temporary wrapping has stopped the leak, or at least is holding the pipe in a position where the o-ring is holding back most of the oil. So I have ordered a conversion kit from the US, which should be here in a week or two...
Top

Sounds a grim bit of design, Mike. As you say, turbo/exhaust is not a good location for any sort of flexible O-ring. What were PSA thinking of?
Top

Here is a cutaway of the original fittings: 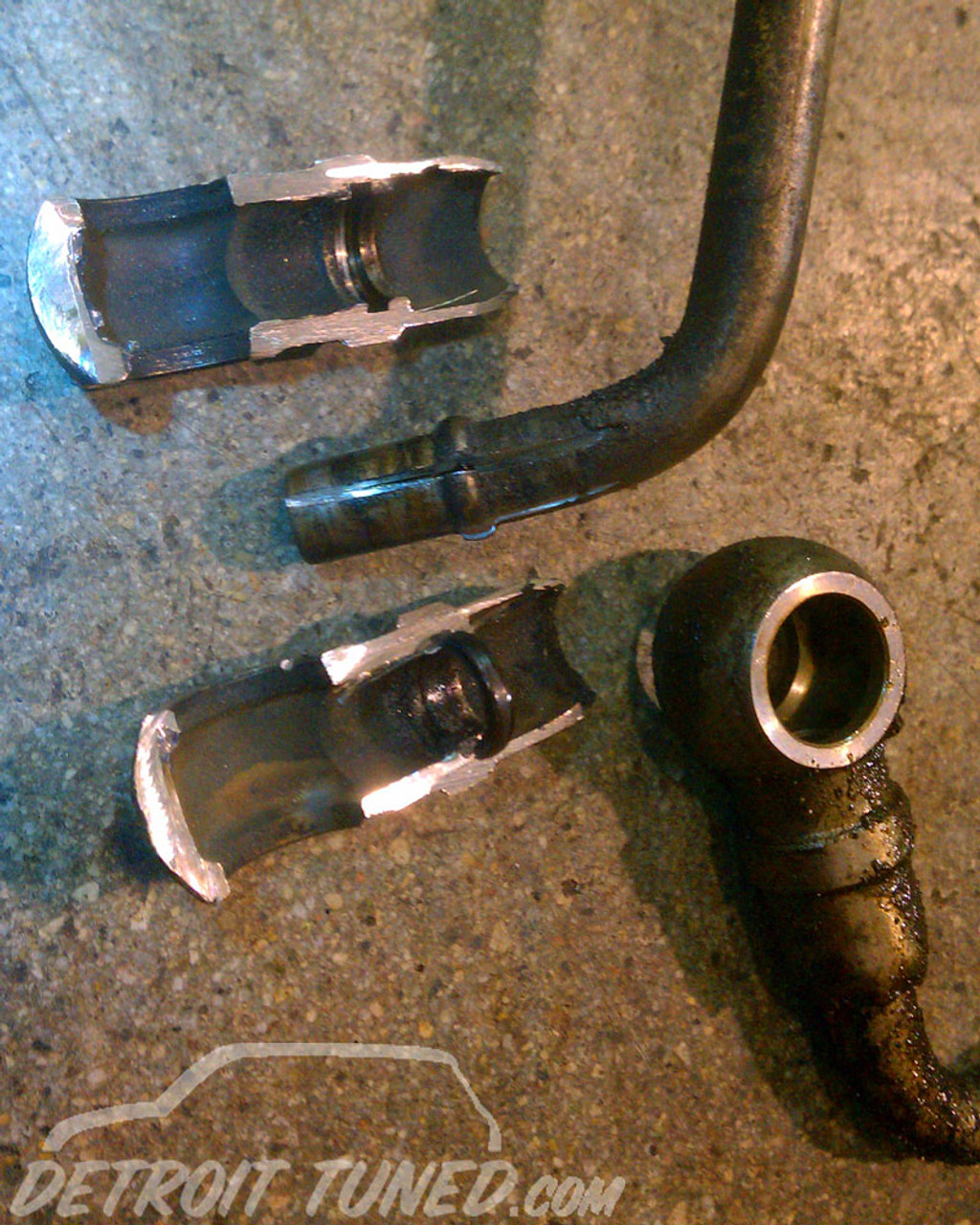 This is the replacement that I have ordered: 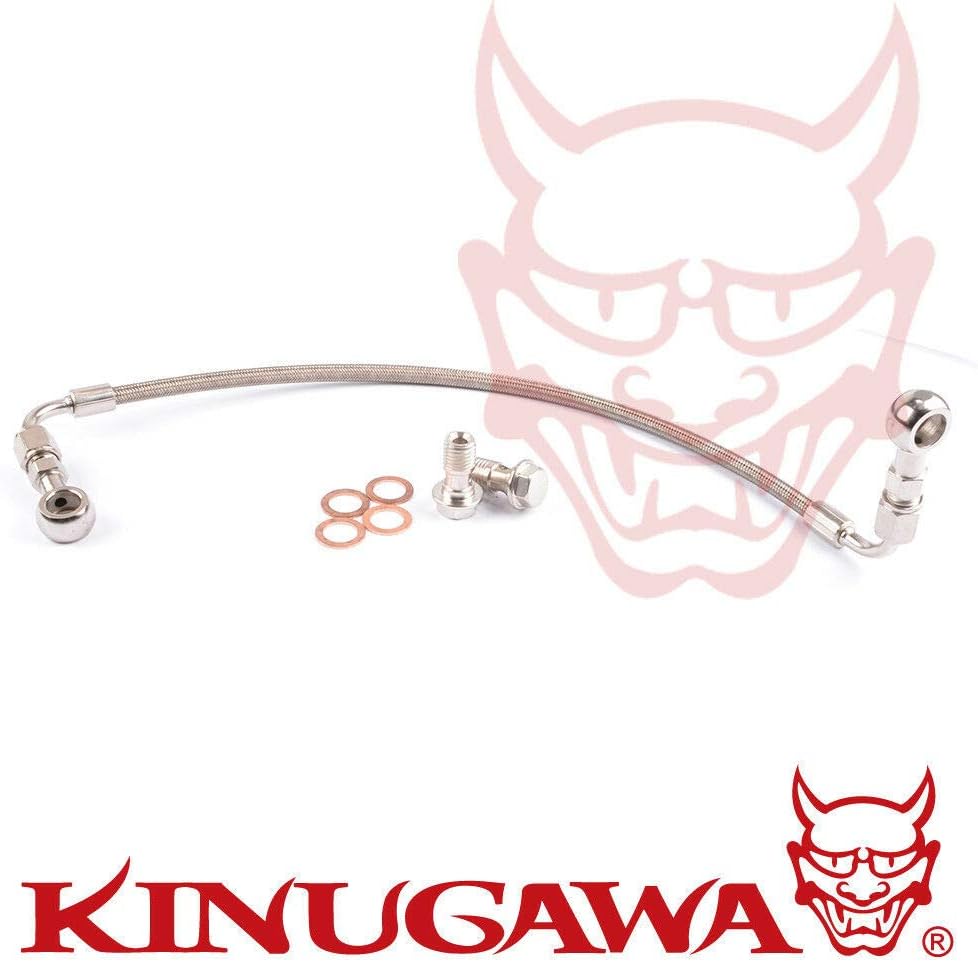 It would be only a bit irritating except for the 4 hours labour to change the part.

To make the design even better, the factory fitted a little heat shield, but instead of putting it between the turbo body and the pipe, they put it on the other side of the pipe, so that heat is reflected back onto it from what would have been the cool side.
Top

The replacement you have ordered looks better engineered Mike...

Hopefully, once fitted, that'll be the end of your problems in this area...
Top

The hose kit arrived and has been fitted. It is certainly no longer leaking at the top end, you can't see the bottom end (behind the catalytic converter heat shield), but there is no longer a smell of burning oil.

Tomorrow we are off for a short holiday in Invercargill and Queenstown, so a good run to test the oil-tightness.
Top

xantia_v6 wrote: ↑
16 Jan 2021, 08:10
Tomorrow we are off for a short holiday in Invercargill and Queenstown, so a good run to test the oil-tightness.

Two weeks seems about average as the MTBF (Mean Time Between Failures) of this car.

It is leaking oil again. This time it was leaving a trail of oil on the driveway at the place where the nose of the car is pointing uphill. Obviously oil was collecting on the undertray while the car has in a nose down position, and escaping next time it was driven.

Off with the undertray, and everything above it was pretty oily. I wiped off a few of the about-to-drips and ran the engine with the car on stands. Engine oil was dripping at about 1 drip every 5 seconds from the RH CV joint. Given that the CV joints are not filled with engine oil, it was fair to assume that it was coming from higher up, but higher up on these cars is something like a black hole with no access.

So I removed the intercooler pipes and airbox and ran the engine again, looking from above, and with a mirror on a stick, managed to spot the leak. It is the VANOS (inlet VVT timing) solenoid which is leaking between the body and the electrical connector, about 1 drip every 2 seconds.

This component is made by Pierburg, who seem to specialise in making sensors and valves that last just long enough for the warranty to expire.

I suspect that there may be another leak at the front of the engine, but there is so much oil blown around the engine bay that it is difficult to tell.
Top
Messages: 175