Hmmm she gives me a risk of dpf blocking warning then steve....
Top

I would still try cruising at 75 to 80 on a motorway in a lower gear, say 4th for a 1/4 hour one way then back again and see what happens. Or do what a me hanic did to my first c5, took off the dpf and blew it through with the air line! I think his garage took about a week for the smoke to clear [emoji12] [emoji13] [emoji23] [emoji23]
Top

There's a pressure sensor on the DPF isn't there? If it's only showing 25% full, but still showing a risk of blocking when you try and thrash it, I just wonder if the pressure sensor could be giving the ECU a bad reading to let it think that it's blocking up.

There is indeed a pressure sensor... Item no. 3 on the list. 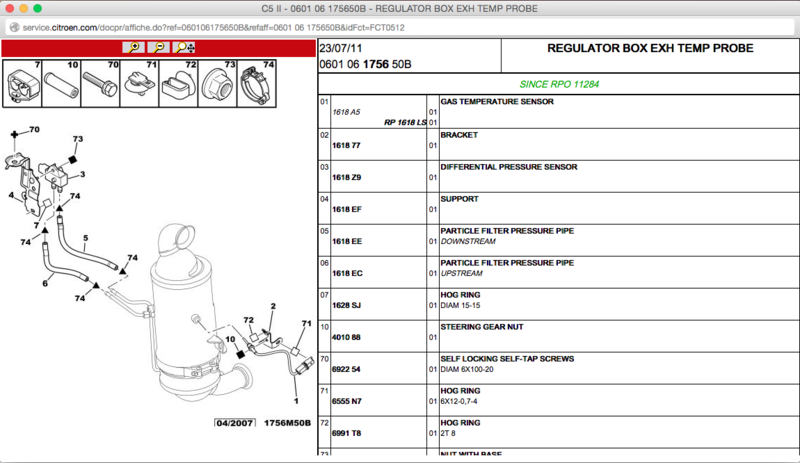 And it's not unknown for the sensor to go belly up - usually giving a reading of 128mbar regardless of the engine speed. The DPF pressure should be 0 engine off, and close to 0 idling, rising to maybe 20-30 mbar at 3000 rpm unloaded.
Top

RichardW wrote:And it's not unknown for the sensor to go belly up - usually giving a reading of 128mbar regardless of the engine speed. The DPF pressure should be 0 engine off, and close to 0 idling, rising to maybe 20-30 mbar at 3000 rpm unloaded.

Ahh haa figures to go on.. Brill thanks richard..

Yes david the pressure sensor is on the front slam panel left of the rad... Just in front of the altinator..

Is the dpf the big cat thing just after the exhaust manifold at the front????
Top

citroenxm wrote: Is the dpf the big cat thing just after the exhaust manifold at the front????

That's it - it's a combined CAT / DPF - Cat first in the top, then DPF in the bottom. Once you've taken it out (which may require rad removal depending on how much room there is) you will see there is a securing band round the middle - once you undo this the bottom slides off, and you will have direct access to the top of the DPF. Check the pressures first though....

Got a DPF regen done of which there is a video Ill link up when photobucket sorts it out... its just uploading...

Anyway it was. interesting... for now though... heres some Lexia screen shots I took... 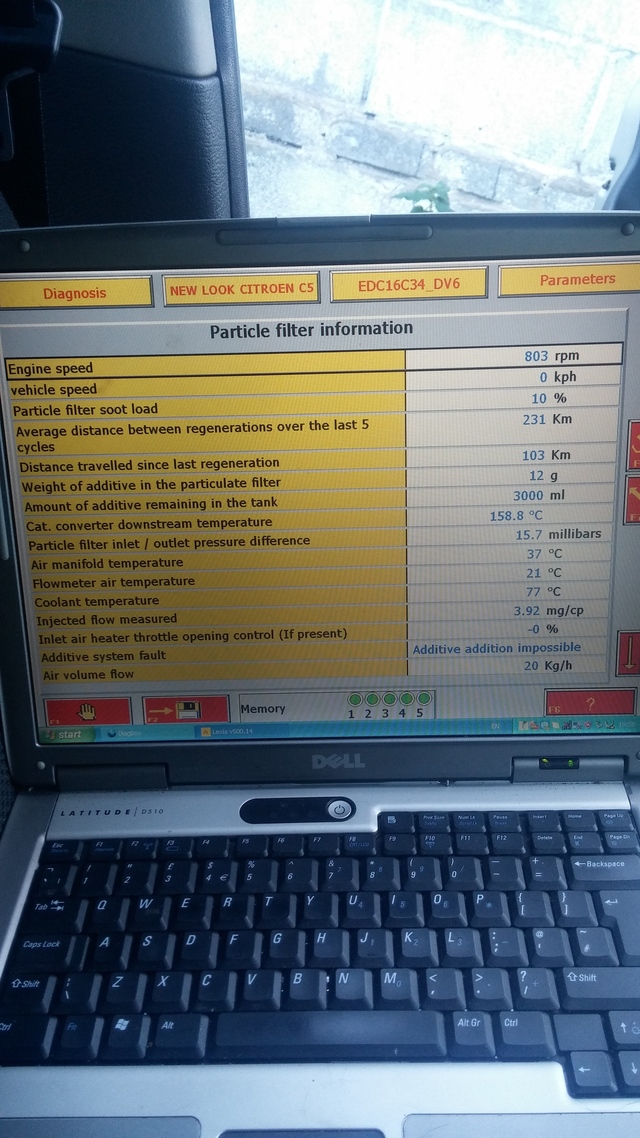 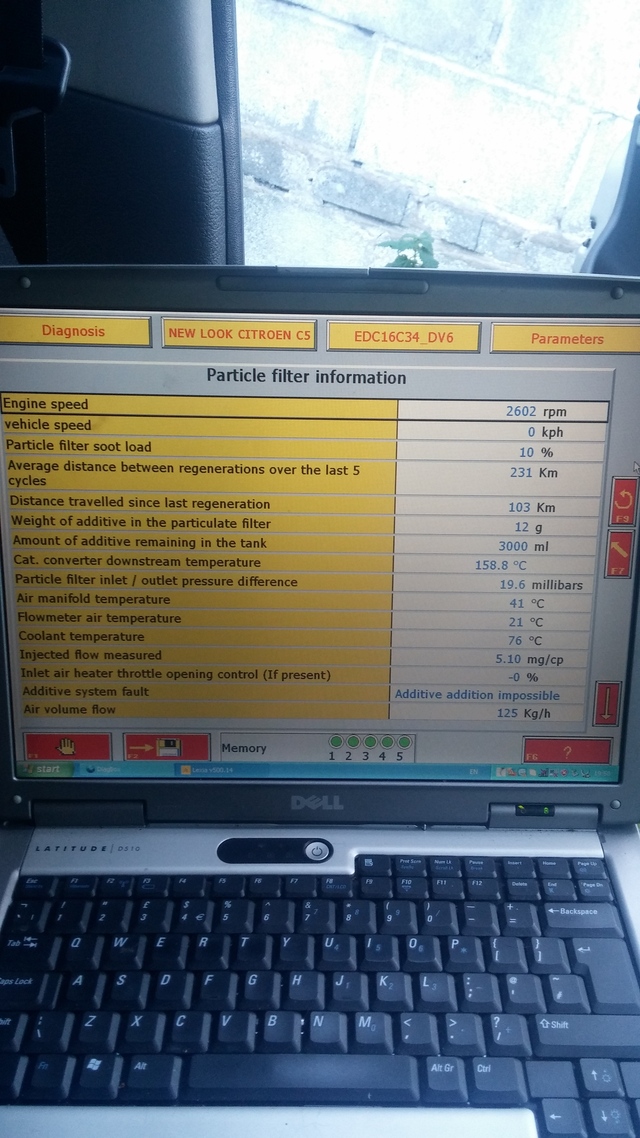 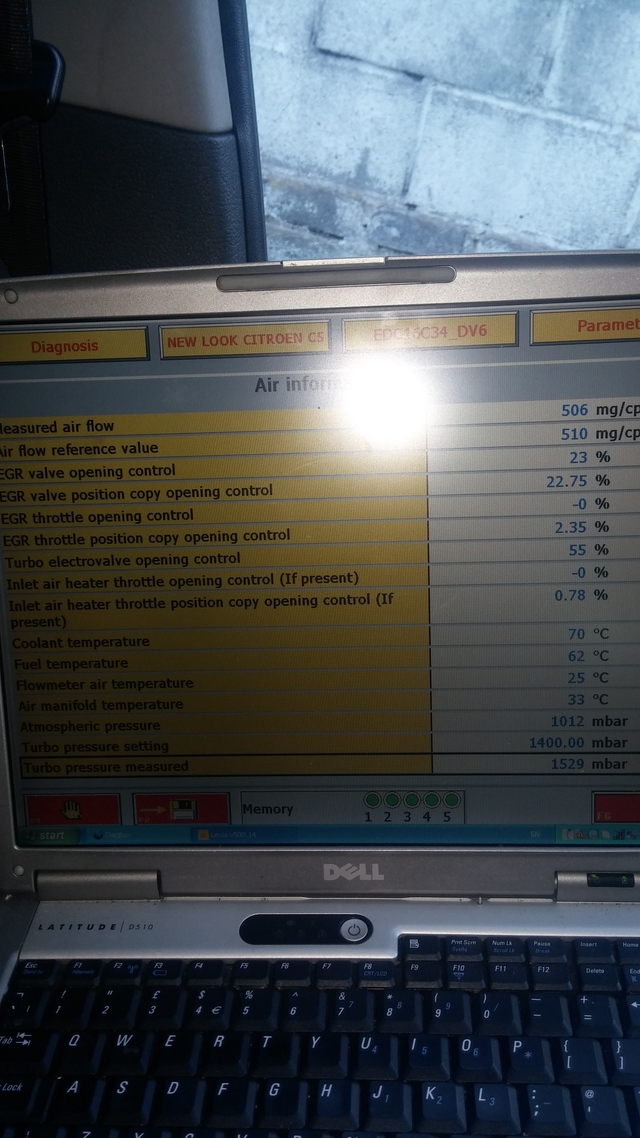 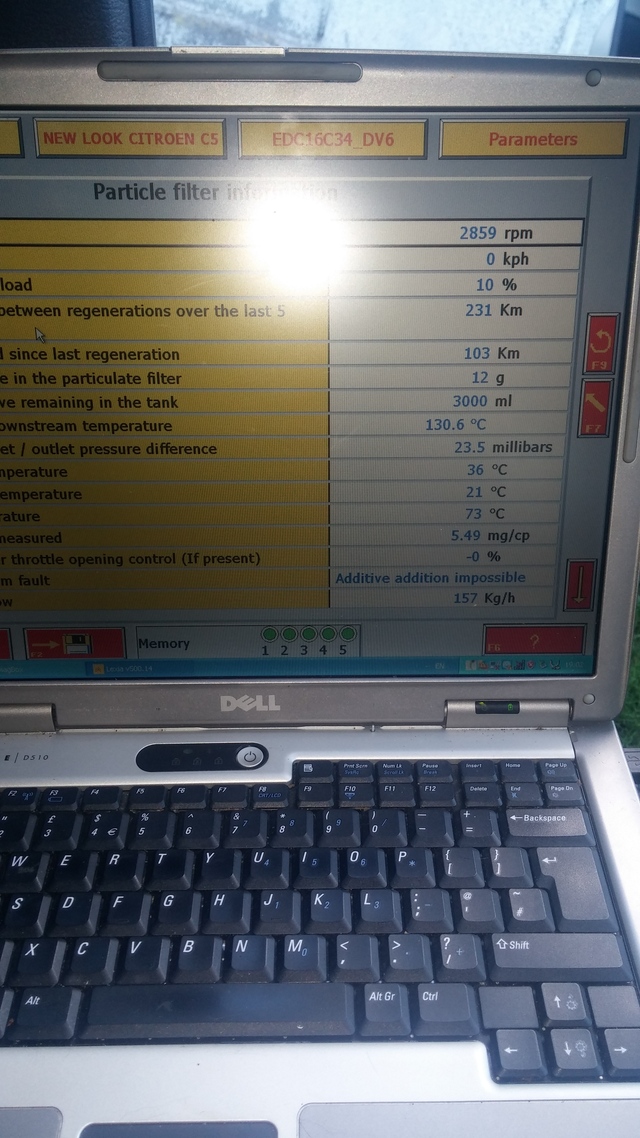 Other issues I have picked up on.. the Turbo IS overboosting pressure.. putting the car in Limp Mode annoyingly.. But Im not sure if thats electrovalve not releasing the wastegate as there IS vaccuum there, or the sensor. Id be inclined to think electro valve..

updated in a bit when Video is ready..
Top

Ok. Turbo pressure sorted. The electro valve was sticking and not diverting the wastegate vacccum and reached turbo boost setting.. Causeing limp mode. Robbed one off the green c5 which was slightly different with two spiogots but the one fitted the third spigot is vac dump tube which on the old 8v engine its built into the bottom of the valve.

Anyway. Issues with egr still exsist so im gonna pick up another one .. Clean it up and fit it. Ive seen one with 57k on it for 30 quid. They arent complex things on these 1.6s so worth a chance.
Top

A replacment egr valve off a car with 50k was sourced and bought for 30 quid.. fitted it saturday and this seems to have solved the flat spot hesitiation on the throttle.

I shall order a turbo seal and repair kit for 30 quid new and set about removing the turbo and dismantleing it and seeing if I can solve the leaking turbine house that it has got.

the last job to do will be new cam belt and water pump to make the car ultimately ready to go..

no pictures of egr replacment sadly but not a hard job at all!!
Top

Delighted all is well on the way to being fully sorted now.. Excellent!
Top

Ok. A small update.. decided to have a closer look at the turbo, and take it off... and I have to say there is a MASSIVE advantage of having it on the front.

Its like PSA/Ford knew there be a lot of issues and failiures with turbos so made it a nice easy unit to remove, and it was too.... 35mins, and I wasnt rushing either!

Once the front cover was off it was pretty obvious theres a soot leak somewhere! 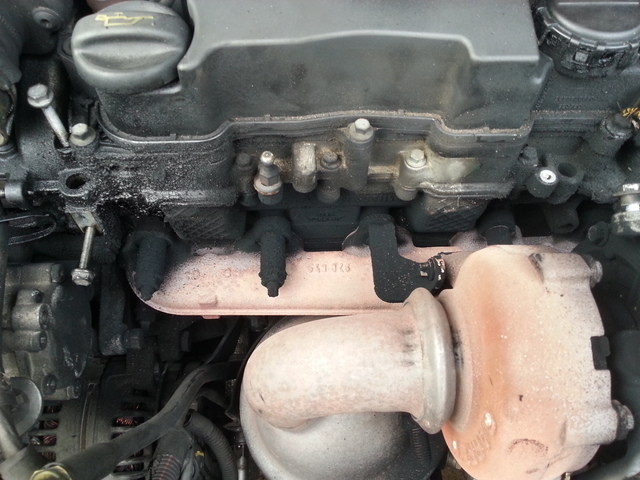 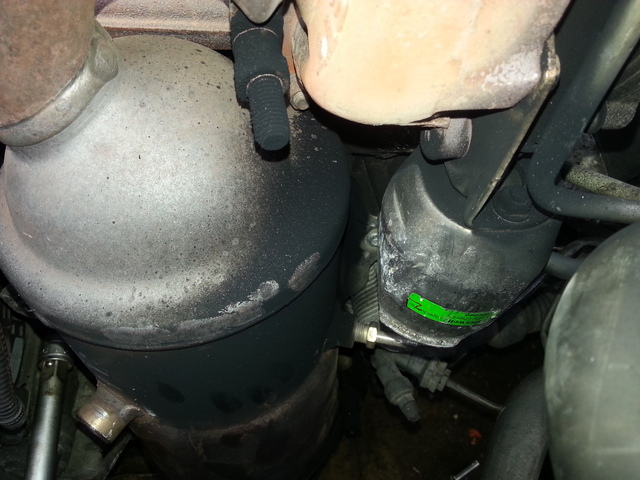 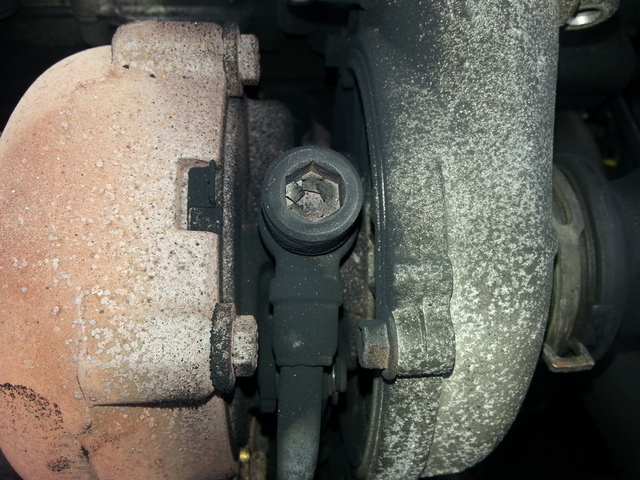 Then to the left is an assembly of throttle butterflys and pipes from the main inlet to intercooler. That needs removing and held by three bolts,

Again in this pic, you can see the DPF to turbo clamp, the DPF needs its bracket slackening, by two 13mm bolts half way down it, as attached to the block.. then after removing this clamp shown above between exhaust and turbo the unit will move aside slightly to clear the turbo when removed.
The small bracket just ahead of the turbo needs to come away too..

remove the wastegate vac pipe from the bottom of the turbo..

Remove the air intake pipe and the oil feed and return pipes... then theres just 4 bolts holding it to the manifold. PSA/Ford have made a very neat idea on the EGR side of things. The EGR valve is actually on the back of the head, and the exhaust manifold is made to look like a 5 cylinder manifold. 4 for the main four cylinders and the 5th for the EGR linked round the side of the head. This leaves the turbo quite clear to work round etc. 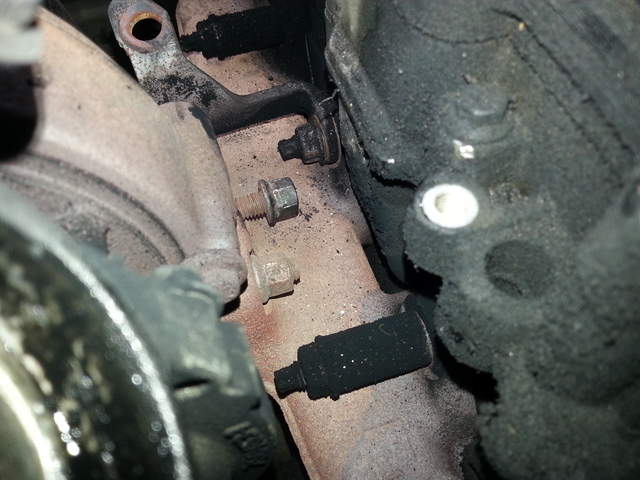 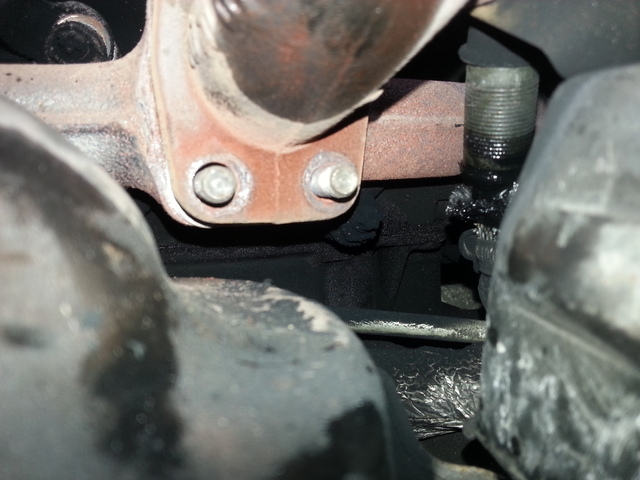 Subject to all clear it comes away nicely!

Closer inpection I noticed in the compressor vanes... 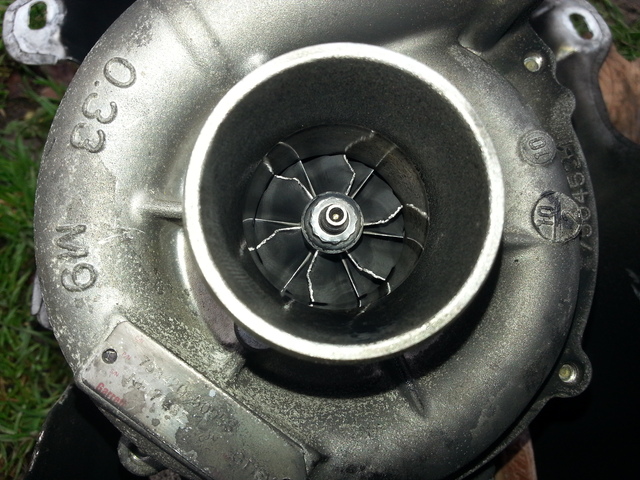 They look broken to me on the tips.... though they had not affected car performance...

So, im going to order a seal kit, open it all up and see if I can find where the Soot is escaping from. Though if the vanes are broken, Ill get a turbo cartridge.
Top

I have a full set of chimney sweeping brushes here Paul for that soot.

I hope you get a nice runner and some big miles out of her when done.
Top

Definitely a couple of broken vane tips there Paul. It must have ingested something like a little stone in the past...
Top
Messages: 59