Does anyone have any experience with benchtop ultrasonic cleaners ? I'm after a fairly cheap (sub £100) 3-5 litre cleaner to clean up various carb bits and some other relatively delicate mechanical bits. I know the cheap Chinese 'eBay special' ones can stop working - repairs aren't that expensive - but do they actually work well enough or are they a waste of money ? Any thoughts or views welcome.
Cheers muchly.
Top

Brilliant, especially for carbs. Second hand advice though as my friend bought one to clean the carbs on his Golf. Worked a treat.
Top

Evilally on here (Alastair) used one for a bunch of kit.
Top

I've got a little desktop one and it's quite handy. Great for cleaning things like carb jets, manky keys, valve/coil screening cans in old radios and the like. Used it once to clean all the keycaps from a manky keyboard too.

Last time I cleaned a carb out the jets got thrown in the ultrasonic cleaner and the body got stuffed in the dishwasher. End result was a fully working carb afterwards, even if it did take a bit of time with the air line getting the water out of all the ports!
Top

Yep....they are great. Cleans all sorts of crap off whatever you can get in one....get one (if you can) with a liner that you can take out/add dependant on the chemicals you wish to use.

Thanks for the info guys. I'm a bit wary of the Chinese ones in Sticky's eBay link though - these are the ones that even the sellers say don't use them for too long at a time to make them last longer ! They normally offer to replace them though - providing you send them back to China

Anyone had good results with <specifically> the el-cheapo Chinese ones ?
Top

Friend of mine has got this 6L one. He seems happy with it so far. 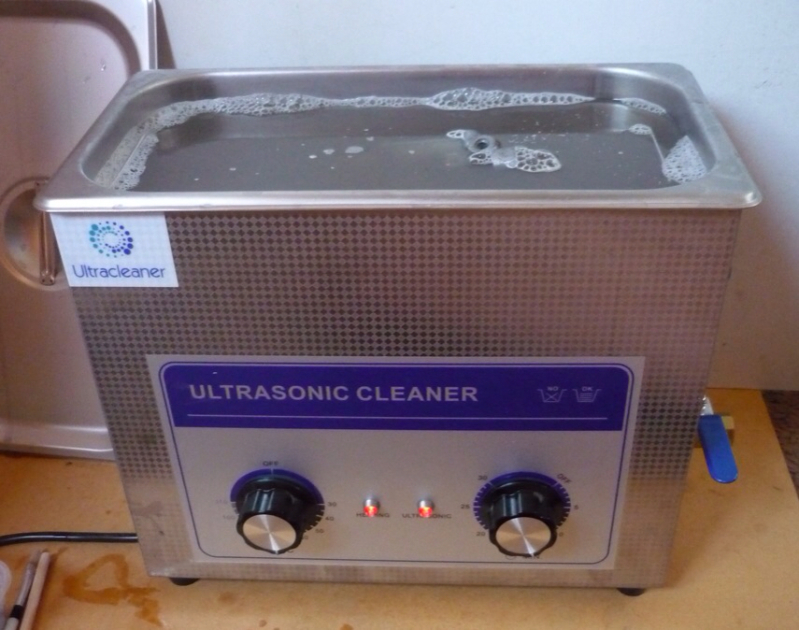 I can ask him more about it if you like.
Top

In the end I took the plunge and bought myself an ex-display 6 litre ultrasonic cleaner. I shall be trying it out this week.
Top

Do let us know how you get on with it, I'm rather temped myself.
Top

Swimming does it for me so on that basis, pop some bleach into the water and then dip the digits!!
Top

Yes, I got an old medical ultrasonic from my last place when a change in health and safety regulations meant they were all getting replaced. Useful now and then, makes you popular with the ladies as it does an exceptional job of cleaning jewelry.
Top

You might attract bejewelled dowagers, rather than chirpy young things wanting all sorts of piercings removed, cleaned and refitted.
Top

macplaxton wrote:Do let us know how you get on with it, I'm rather temped myself.


Well, I think I'll declare it a success ! I've just finished cleaning a couple of old Kohler 8hp carbs and a Briggs 11hp carb in a filthy condition and the results were quite successful. I did 3 sessions of about 15 minutes each and used a mix of water and APL Chemicals (ultrasonic) engine parts cleaner at 60 degrees. Once rinsed, a quick blast with an airline brought them up pretty good - including removing a lot of the old paint. I took 'before and after' photos, but just imagine a dirty corroded carb, then imagine a clean carb - and you'll get the idea

The water was filthy at the end !
Top