Figure that given I've dodged no less than four crash-for-cash attempts in as many weeks (all avoided due to a combination of cars with bloody powerful brakes and my own hypervigilant driving thanks to my PCV training), it's time to man up and get a dash cam.

This I confess to being an utterly unknown field for me, and after a bit of Googling on the subject have just ended up with my head spinning as every other website seems to be absolutely sure their advice is the best, and contradicts half the others. Models also seem to be replaced every three point two nanoseconds which doesn't help...

This is slightly complicated also by the fact that I have serious OCD regarding the interior tidiness of my cars, so a whacking great thing I have to stick to the windscreen and power from the cigarette lighter ain't going to fly. ...especially in the Saab where most suction cups drop off the windscreen after about ten minutes because it's so curved and in the Skoda which doesn't even have a cigarette lighter socket...

I'd be looking for a setup with a remote camera that I can permenantly fit behind (or in) the rear view mirror and wire in behind the headlining etc with a control box to live somewhere sensible. Ideally something without any unnecessary user interface...rather once it sees 12V it wakes up and starts recording, and likewise saves and goes to sleep once the car shuts down. Video reviewing can be done on any of my computers, and given that I'm probably going to mount the unit behind the dash, video display onboard would be pretty pointless.

So..with the set of needs summarised as a unit with remote wired camera, rolling storage on a common storage media, 720p minimum resolution at 60fps, decent optics (as it's pointless if the video quality is pants!), and the seemingly ubiquitous GPS tracking, what are people's suggestions?

There are several really cheap ones out there which I'm almost tempted to take a punt on at least to have something in the meantime until I get a decent system put together.
Top 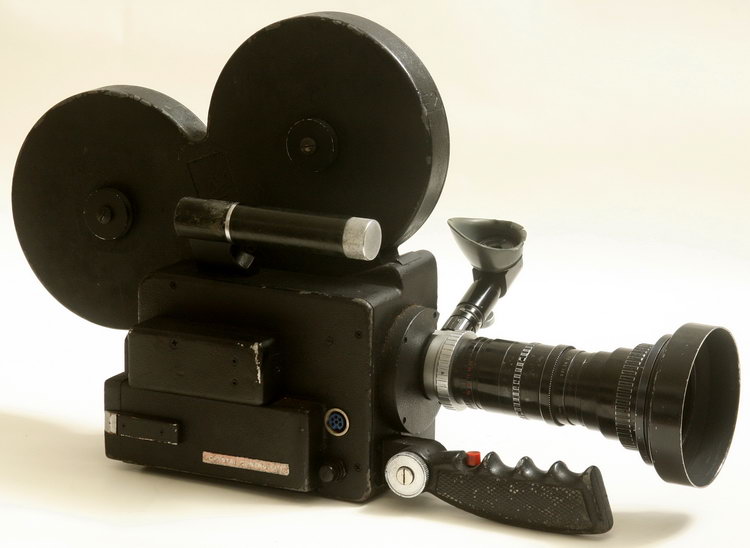 Zel, has all these attempts at a crash for cash happened in Milton Keynes?

CPC were offering a very cheap one the other week I spotted in one of their circulars..
Top

The latest Which? report lists a couple of 'best buys'. The best buy was Nextbase in car cam 402G' £125 on line, the only other one they recommended was 'Trancend Drive Pro 200' at £86 which they rated as good value but doesn't perform as well as the Nextbase.

If either of those are in your price range it will save you taking a chance on any of the dozens of others there are.

I'm getting more sold on them too. Friday saw someone reverse into me blithely as I sat in my parked car - fortunately for them, there was no damage I could ascribe specifically to their towbar's contact, and on the way home a fellow just sailed through a red light at a tee, as though asleep.
Top

Thanks folks, will do some more digging.

Jim, yes they have all been in MK, and all on the 70mph approaches to the V6/Portway roundabout. All the same story, car moving into the right lane as if to turn right, then slamming the anchors on without warning and with no working brake lights. Usually just as traffic starts to bunch up a bit before the roundabout.

The worst one I have heard of so far happened to a friend back up in Aberdeen a couple of years ago. He was stationary behind a van in the early hours of the morning (he worked a night shift) when the driver of the van reversed at speed into the front of his car. The three folks in the van then when the police turned up claimed that he had run into the back of them.

In the end it turned into a case of their word versus his and it was three vs one...though I would have thought that the police might have noticed that the skid marks showed his car had skidded backwards rather than forwards...

In the end though it was ruled that he had hit the van, and it resulted in his car (mint early 70s Merc) being written off and the loss of his NCB etc.

I hope you catch them out! Really shabby conduct.
Top

addo wrote:I hope you catch them out! Really shabby conduct.

Absolutely... I do too.. It is a despicable crime.
Top

Is it a particular cultural or ethnic group behind these events?
Top

It's due to the acceptance as a "default position" that ANY rear end is the fault of the following driver.
Even with a dash cam, if it is the first time that driver commits does such a thing there are numerous "reasons" given for slamming on the anchors thus they get away with it. It is relatively easy for "legal types" to argue the point that for whatever reason, the following car should be able to stop in time.

All the dash cam shows is the event, that is not the depute.

Ethnic group ?...yep "the scrote", the breed is common across the human colour range, often found living in large like minded groups funded by the 2tax payer breed".

After my Mother had a head on with a BMW I bought her (and myself) dashcams for Christmas. This is the type I got;

I also got us both a 32GB microSD card. You can get a kit to hardwire it into the electrics (if you do, you can then choose whether to have the camera permanently live, or when the ignition is on);

The camera is about 2" long, and about 1" in diameter. It will fit (hide!) easily behind a Xantia rear view mirror, and the standard power supply has a 3 meter cable, so you can chase the cable into the various trim pieces. The downside (from your beginning post) is the mount sticks to the windscreen with an adhesive mount, but you can buy more of these if need be;

As the camera is so small, it will (with an appropriate case; I got one from Poundland) fit in a pocket, and is easily transferable between mounts. You can also download playback software that will work with the data. I have (within the camera settings) set it for MPH, and vehicle reg, and with the file length set to 5 minutes (you have four choices; 1 minute, 3 minutes, 5 minutes, 1 file), as (to my mind) it should be easy to find (assuming you note the time at the point in question). This video might help;

My dash cam came from ebay about eighteen months ago. Cost me around £35 and sits up alongside the rear view mirror. The wire goes top side of the passenger visor, down the screen panel into a socket fitted under the glove box. The second picture is a still from a few minutes of footage where an Audi is about to take off my n/s wing. 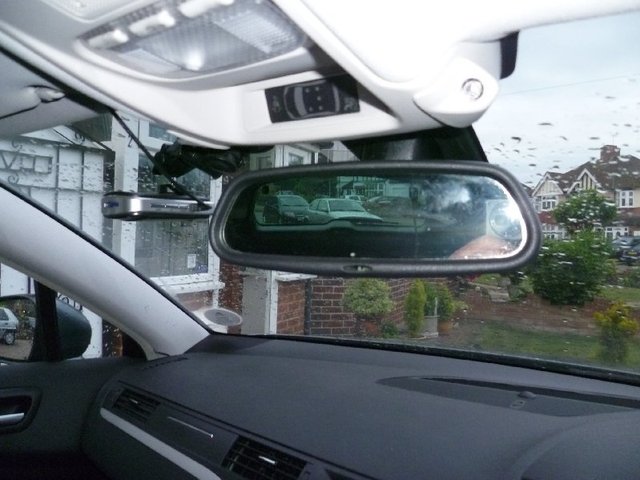 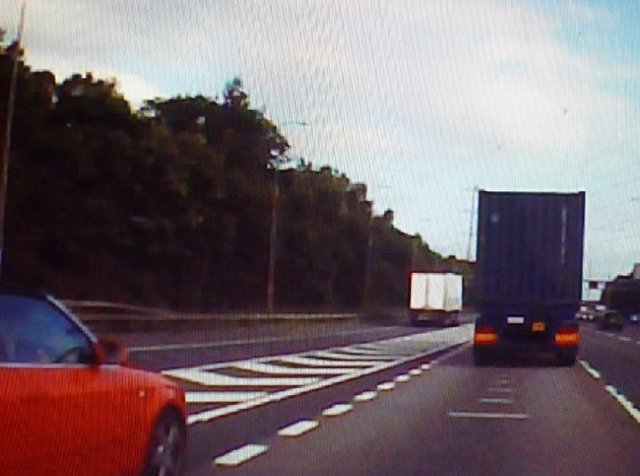 I've also found a forum called "Dash Cam Talk" (came to it via Reddit!). Seems to be carrying some good honest guides and opinions.

One pet peeve is gear and gizmo sites where people are full of praise for their new purchase rather than objectivity.
Top

The latest bunch I've seen down here in MK are being really quite sneaky about it - always seeming to be working just before the point where traffic slows abruptly from 70mph, where the road has widened out to three (or four?) lanes, and traffic is generally just about to start shuffling - so many people's attention is divided enough that they aren't likely to notice that the car immediately in front of them (which is sans any working brake lights) has suddenly come to a complete halt. If you're following a sensible distance back and are paying attention, you should be able to - should being the operative word though, and a lot of people I know would have either been in the back of that car or come very, very close.

Only reason I think I've dodged by as much as I did was that I tend to work on the same basis as I was taught in a bus - the absolute minimum distance between you and the vehicle in front should be somewhere in the region of eight seconds at whatever speed you're doing. Also known in my head as "if that car hit an invisible brick wall and stopped dead without warning, can you avoid it safely?" Not to mention the rest of the stuff taught through the Smith's System training, 99.5% of which is just common sense, but it makes you actually *think* about it.

Definitely one of the most useful classes I think I've ever been to. Especially when you bear in mind that when you're in an urban service bus, despite the fact that it weighs ten odd tonnes, if you stamp on the middle pedal, they will come to a halt mind bendingly rapidly, your passengers won't. They ain't strapped in (no seatbelts required on anything that can't exceed 60mph - most buses are limited to 56mph), and especially if you have standees, an emergency stop can get real messy in a hurry. An articulated (bendy) bus for example can have from memory 60 people standing in the aisle...Never mind grab handles, it doesn't take much imagination to work out that those at the front in the event of a "rapid deceleration incident" are either going to go through the windscreen and/or get crushed. There's a reason that one of the first things Davie had me do when I was out in the bus was an emergency stop...it doesn't seem physically possible that something that big and heavy can possibly stop that quickly (on a dry road anyway - wet braking distances are unnervingly increased relative to a car because commercial tyres are made with so much harder compounds, and lockups are far, far, far easier to provoke).

What is it that's advised in the highway code regarding following distance? Think I remember it being something ridiculous like two seconds - though it was about 12 years ago when I last read it, mind you...Sure I remember hearing "Only a fool breaks the two second rule" or something to that effect.

Enough rambling from me for now...Hope to get a chance to do some more research on these things tomorrow.
Top

Shame you can't fire some sort of tracking glob onto their car!

If I get a camera up and running, I'll have to share some Sydney peak hour traffic, it is akin to the Péripherique.
Top
Messages: 27