Further adventures of the Citroenmad/NorthernMike C5

Further adventures of the Citroenmad/NorthernMike C5

As you may have seen in the for sale threads I've bought Northern Mike's C5 to replace my Synergie and so far I'm very happy with it. I do quite a lot of motorway miles and the C5 should suit this perfectly.

There are a few things to sort out, and I was planning to just leave it until MOT time and then decide whether or not to keep it, but there's one problem I might be able to sort out straight away.

The stereo is quiet on FM and I am a bit addicted to Radio 4. However, I've got quite a nice Xplod unit that used to be in the Synergie. I also have an adaptor to make it work with a Xantia's steering wheel controls. So my question for the gurus of this forum is:

1. If I try and plug in an aftermarket stereo, will the whole car go crazy? Will the brake pedal start operating the horn etc?
2. Are the Xantia steering wheels anything like the C5 ones? Is there any chance that the adaptor I have will work?

Obviously the dream would be to keep the steering wheel controls and the info display in the dash...
Top

A bit about me - have had a few Citroens over the years, my car history is...

1. 1972 Renault 4 TL (850cc) - fun! Bit slow though. Sold it to buy a...
2. 1992 Ford Escort (1.6CVH) - bleurgh. The most expensive car I've ever bought. Needed something to trek up and down from Manchester to Reading to see my then girlfriend. With hindsight I would have been much better off without her or the Escort (especially since I turned down a mini 1275GT for the same price because of the motorway miles). Finally saw sense and got rid of it (and her) because I really wanted a...
3. 1989 Citroen BX 16v - wheeeeeeeee (still got it - awaiting restoration, I suppose). Rusty pipes and the fact that it was a bit thirsty saw it replaced with...
4. 1995 Citroen AX 1.5D - 60mpg EVERYWHERE. Taken off the road when the fuel pump started venting diesel down the side of the car.
5. 1996 Pug 106 1.5D - bought as a stopgap but it was crap, not as economical as the AX, rubbish steering and had a seized rear beam. Glad to see the back of the POS.
6. The AX again (fuel pump now fixed) - lovely - wish I hadn't sold it but I got married and we decided we needed just one car.
7. 2000 VW Polo 1.0e - poverty spec
8. 1985 Saab 900 4dr. Also poverty spec (single carb) but much more fun. Went up and down France in it several times.
9. 1998 Citroen Synergie 1.9td - bloody brilliant - got set on fire on my drive (bought CCTV for my house after that)
10. 1995 Toyota Corolla 1.3 - dullest car EVAR but it was free, as a stop gap while the Saab was having bodywork done. Got from Bristol to Newcastle in sub 3.5 hours in it once including fuel/big wee stop (I'd missed my flight).
11. The Saab again, eventually sold to a bloke round the corner who did it up beautifully.
12. Another BX 16v. Never quite got this one on the road so not sure if it counts. Planning to strip it out for trackdays and hillclimbs, and it will donate nice bits (IT HAS AIRCON!!) to the red one.
13. 2000 Synergie 2.0HDi, also brilliant but have done nearly 40k in it now and need cruise control, hence...
14. 2002 C5.
Top

djoptix wrote: 1. If I try and plug in an aftermarket stereo, will the whole car go crazy? Will the brake pedal start operating the horn etc?
2. Are the Xantia steering wheels anything like the C5 ones? Is there any chance that the adaptor I have will work?

* but as long as you only connect the power and speaker wires, it will be OK. Not sure if there are any possibilities for an aftermarket stereo working with the steering wheel controls / screen - the BSI rather complicates things!
Top

Further bulletins on the radio situation as events warrant.

Meanwhile, I have had to do the first bit of maintenance; replacing a headlamp bulb. Luckily I was fully prepared with all the expletives I needed and managed it in only about 15 minutes...

Racked up about 500 miles in it now, still very happy, went to Milton Keynes and back yesterday (as a result of which it is now a bit grubby). Needs new tyres I think, so I'm going to take the opportunity to "upgrade" to some exciting wheels and trims, watch this space...
Top

Well, I finally got a bit of time to look at the radio yesterday.

* Removed the original one - nice and easy.
* Scrounged a cage for the new one from the BX
* Put in fascia adaptor
* Put in new cage
* Tried to work out wiring.

This was also pretty easy. The original one was standard ISO connectors for power and speakers, and I have an adaptor loom to go to the new one. I had to find something to locate the back of the new one, but it works and the car hasn't immobilised itself. Initially the two lives were the wrong way round - constant live and switched live - but the loom has bullet connectors to allow them to be swapped.

The "switched live" isn't really switched, it's (I assume) from the BSI and turns itself off about 30 seconds after you lock the car - also it turns itself on if you re-press the "lock" button on the key when the car is already locked - but it all basically works and I now have a radio

The downside of course is that I've lost the steering column "stalk" controls. I've been looking for an adaptor for this but I'm not completely convinced that any of the ones I've seen yet will work.

The extra connectors that were in the original radio are ISO C format:

C3 has the connectors in for a remote CD changer, which are the ones that the installed Connects2 thing uses to get a 3.5mm line in (so I've also lost this at the moment)

C2 (the green connector) is empty.

Which only leaves two orange wires in C1. This is where I get confused. As standard, C1 is for line out connections as per this diagram.

So the possibilities are:

* I've mixed up the connectors and the remote actually comes in on two wires of C2 (CAN_BUS? Whatever that is?)
* Non standard use of an ISO connector - definitely a possibility

Either way I need something to get to a Sony remote control input which is a 3.5mm stereo jack.

While I'm thinking about that I need to tidy up the aesthetic side - I think the wiring loom is getting stuck behind the HU as I insert it and I need to come up with some way of keeping it out of the way as I put it in. I'm happy to have radio 4 on the move again though

No progress on the audio side, but I'm sitting around waiting for my second child (now 10 days overdue) and so I took the chance to do an oil and filter change. The previous filter was on insanely tight and I have pretty much destroyed my antique strap wrench removing it

Hopefully it will have a bit more poke now, not that it was particularly lacking before. Found some oil in the intercooler pipework but not enough to cause concern.

I leave ye with a riddle; mushroom soup, bits of metal and (in my case) the brass washer are all examples of what...?

Things you don't want to find in the pan when you pour away the old oil, having already refilled the car with oil and put all of the silly bits of plastic back in place. Never mind, I'll do another change in a couple of weeks and put it back...
Top

It passed its MOT, needing track rod ends and a few other bits. Didn't fail on the rear arm bearings but they do need doing.

It is now shod with spanking new Jinyu tyres all round...

Another year of C5 motoring awaits

I have been using a pair of these, bought to remove a recalcitrant fuel filter but comes in for many jobs, mainly at work but did the oil filter with it yesterday, seeing as it was there (also used for fuel filter). 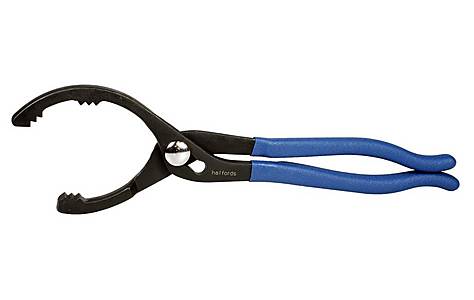 About six quid from eBay.

I also found the doughty washer from the oil drain on the deck when I cleaned up - after refilling with oil, naturally.
Seals fine without it. There wasn't one on the car when I bought it.
Top

Did you get the old C5 through its next MOT djoptix?
Top

I've now had the rear arm bearings done at ridiculous expense (possibly might not have bothered if I'd known exactly how much it would be) and it's had the back 2/3rds of the exhaust as well.

The Jinyu tyres are crap, they're getting near illegal after what must be only about 6k miles!

Next steps are a leather conversion (see discussion on the Citroen board) and Exclusive wheels.
Top

How much was it to get the bearings done?
Top

I've now had the rear arm bearings done at ridiculous expense (possibly might not have bothered if I'd known exactly how much it would be) and it's had the back 2/3rds of the exhaust as well.

The Jinyu tyres are crap, they're getting near illegal after what must be only about 6k miles!

Next steps are a leather conversion (see discussion on the Citroen board) and Exclusive wheels.

It must make a difference now that the arm bearings are done, it was getting noisy when we had it, though it would then be quite for a while. My C5 estate as the same, started to make the usual cracking noises over bumps which lasted a few months and then it went quiet for the rest of the time I had it ... very odd.

I'll remember not to try Jinyu tyres then! I always stuck to branded tyres with that C5, mostly Michelins but the odd pair of Goodyears and Dunlops. Think it had Vredesteins when I sold it, which were pretty good.

I also used to have it on Exclusive SE wheels, here is a bad picture of it:

How many miles is it on now, it must be heading towards 200K?

Very pleased to hear that its still on the road and giving good service, its still one of my better buys

Lovely C1 in that picture

It was great, Jim. I loved that little C1 Splash. We had it almost three years and it was excellent fu