Hmm, well, I don't even know if anyone will be at all interested in this.

So, the story is, that my dad bought himself a DRK 3-wheeler Morgan-esque thing back in 2006 for his 60th. He lives in Athens, the car was bought in Preston. My brother and I drove it out to Greece to make sure it got there on time.

The DRK was actually a proper production car, in that enough of it was factory-built to class as a production car by the laws as they were then, even though you fitted your own engine and drivetrain.

Anyway, various ailments ensured my dad made the decision to give up driving about 4 years ago, and the car sat sadly in the underground garage of their apartment block until last April when he shipped it back for Ben and I to share and get some fun out of. Ben stuck some brake fluid and a new battery in it, and took it for an MOT, which it surprised us all by passing. It was used very sporadically all year, and nothing was really done to it - not even an oil change, due to babies arriving, lack of time and spare money and so on. I'd been contemplating bringing it down here for a while, but never got round to it.

With the impending demise of the C5, and finding out how much the engineering work to get the head skimmed and ensure it is right will cost, well, bugger that, I'm not doing it. So, I need transport for just a few days a week. I went and got the DRK - met Ben at Stafford Services at 11:30pm on Friday night and drove it the 170 miles home. Didn't help that the M42 was shut between 4 and 3 Southbound, which added 15 miles through the country to our journey, but we arrived home safe, not too cold, at about 3am on Saturday.

Since then I changed the 8 year old oil... fiddled with the carb to sort the idle out, and used it daily. I've done more miles in the last 3 days in it than it's done in 7 years.

Problems - the indicators have packed up. Can't find the flasher unit either! So, a new one is being collected tomorrow and we'll just re-wire a new indicator circuit in and balls to the old one. The wiring is utter tosh.

What has this got to do with French cars, I hear you say..

up on the ramps having an oil change.. 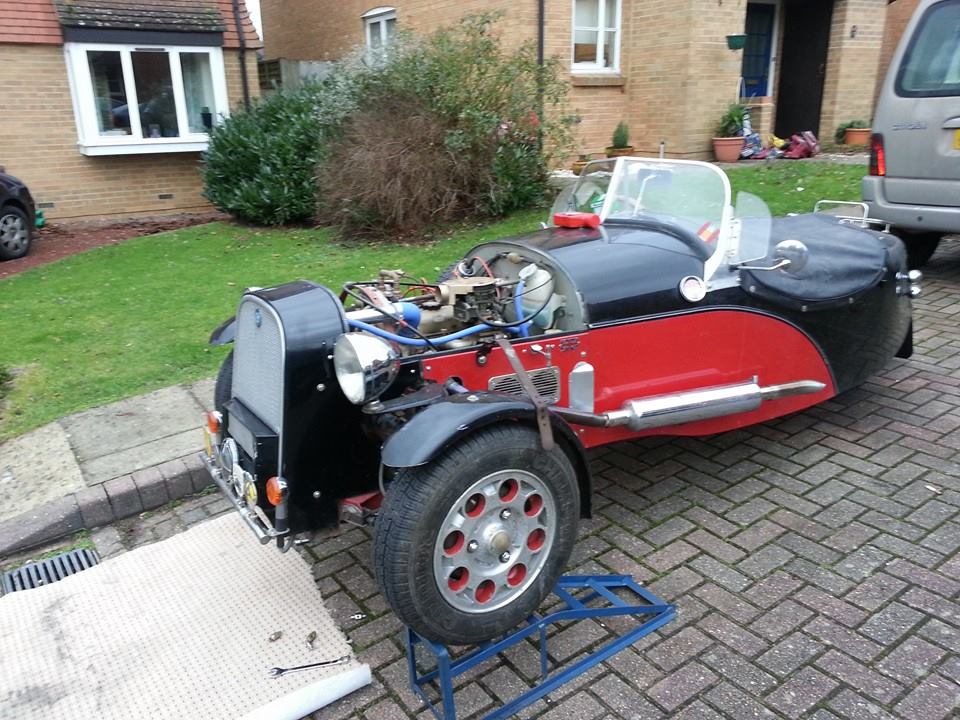 in Henley on Sunday, with a very peturbed American as a passenger, who now really does think the English totally loopy.. 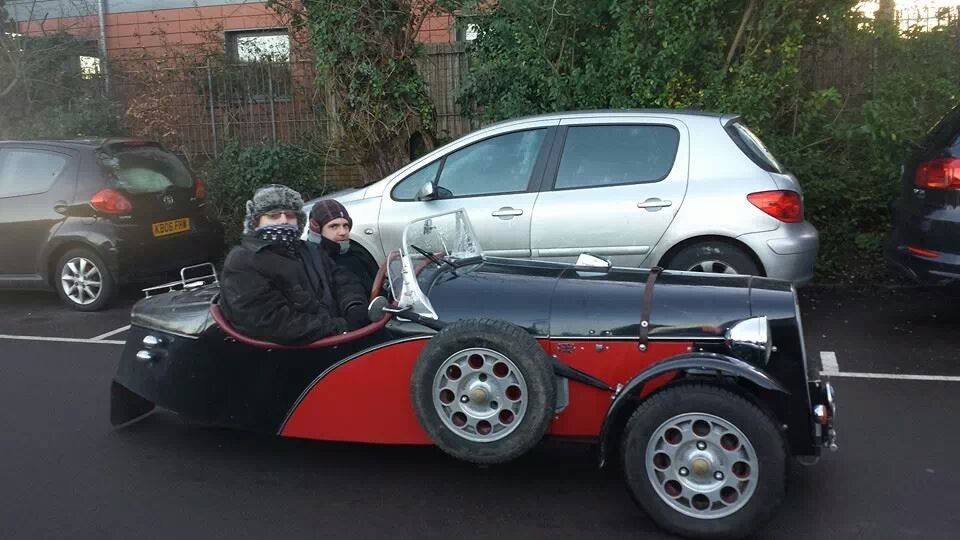 I'm going to use it as a daily for a while. I've got full thermal bike gear to wear, a really good set of Alpinestar lightweight, lined biker gloves, and a full-face helmet to use. It's much better with that gear on.

shame its got Rhino under the hood,

shame its got Rhino under the hood,

It has no heater at all. I'm tempted to put one in. The take-offs on the head are there, but there's nothing piped in. Plenty of room for a small matrix behind the dash if I could find one small enough. They are available new for kit-cars and specials, at about £120. In all reality, with a decent pair of jeans and thick socks on, it's not cold, even now. I have all the gear and a full face helmet for the winter

The 1108 isn't too bad. Well, this one isn't. It's had a big valve head fitted, lightened flywheel and crank, fast road cam, new pistons, big ends, mains, small ends, rods in 2003. I've got all th e bills for all of this work. No wonder it goes well..

I might have a potter down to see you one day when it's a bit warmer and we have indicators working again.
Top

Northern_Mike wrote: it's not cold, even now.

I might have a potter down to see you one day when it's a bit warmer and we have indicators working again.

i though you said " its not cold even now "

it would be good the see the beast, and you of course

Just a thought. If you take the battery out, connect a tone generator (network device) to one of the indicators, and used a tone locator, you might be able to find the flasher unit. I have both of those items.
Top

I think I've found it thanks James. I buzzed up to Jim's in it today. He determined it's a bad connection or bad earth for the indicators. As it was going dark, we didn't have time to root about under the dash, but at least I know what I'm looking for. Hand signals are easy enough in it, though I'm not sure how effective they were on the M25 in the dark

Malcolm - it's not so cold, it's just a bit damp. I was actually sweating when I got to Jim's earlier today I was wrapped up that well against the elements. The only problems I had were my earphones slipped out of my ears inside my helmet, and the windscreen washer is rubbish. Oh, and at one point I was wondering why everyone was driving so slowly, when I was doing an indicated 70. So, I switched the Tom-Tom on to find I was doing 85.... I think I need to recalibrate the electronic speedometer.
Top

Mike, it was really good to see you yesterday and sorry I was so pre-occupied with a Xantia front height corrector replacement (

) that I was unable to devote full attention to your indicators

Your DRK is a lovely machine. I love it to bits

If it doesn't have a name already, I christen it "Diggler".
Top

I would love something like that, for a bit of fun. I bet it's a laugh a minute.

I came to work in it today, parked betwen all the VWs and BMWs it looks hilarious.

Mike that is a thing of beauty! It's awesome. I've never heard of them before. Very very impressive.

Err is that a brolly tucked behind the spare wheel?

It is a brolly, most useful if you're out for a country drive and the weather turns rather inclement don't you know.. :-p I preferred the multicoloured one that was there before but my brother swapped it for a black one.

It was bloody cold on the M4 this evening.

CitroJim wrote:Mike, it was really good to see you yesterday and sorry I was so pre-occupied with a Xantia front height corrector replacement (

) that I was unable to devote full attention to your indicators

Taking it easy then Jim???