[OT] When hard drives really were...

[OT] When hard drives really were...

While having a bit of a tidy up earlier, I thought I'd have a 'look back' at hard drives, one from each decade really I suppose. What we have in the following slightly blurry pics:

A SASI (I think) precursor to SCSI) drive from around 1984 (not too sure on the year) with its ST506 interface, it does actually still work or did the last time I had something to connect it and its controller card to about two years ago although its very slow indeed and noisy. Note the external motors and relative lack of controller card, back then the controller for it was on a card not part of the drive itself.

Note the massive drop in size compared to even the old IDE hard drive. The SASI is 5.25 double height, ie the height of two desktop optical drives.

Would anyone like to take a guess at its capacity ?

, purposely not posted that for now. 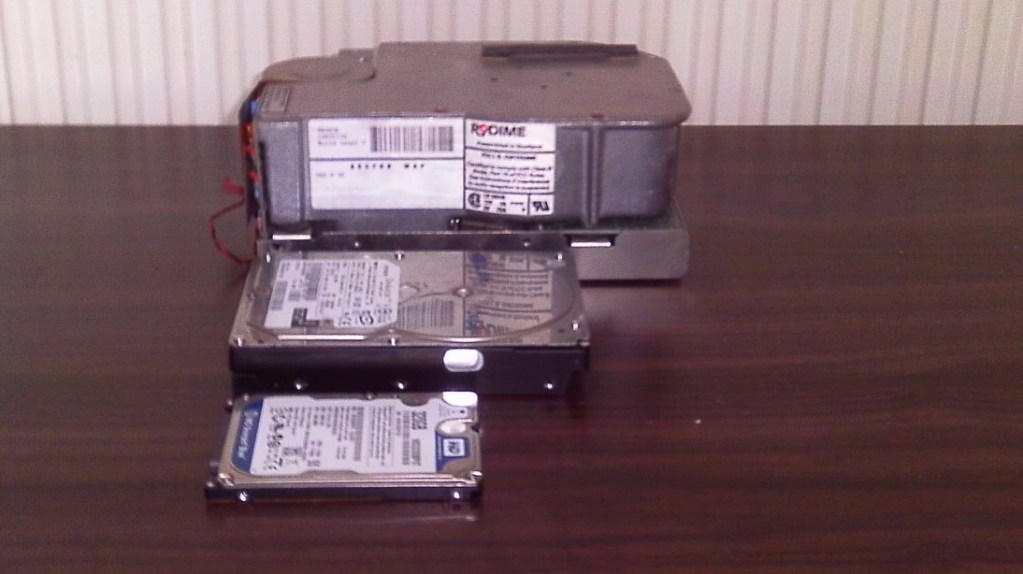 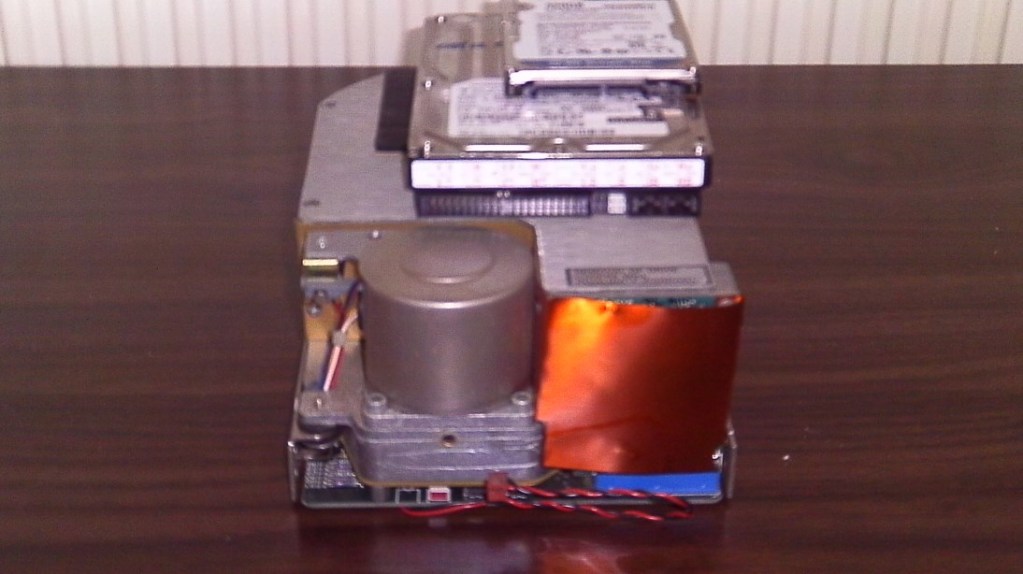 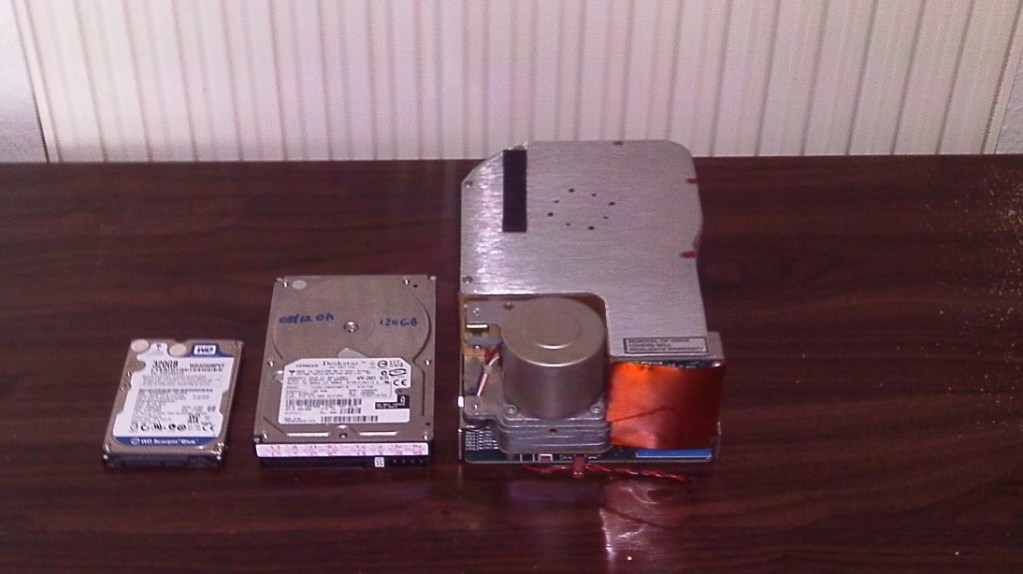 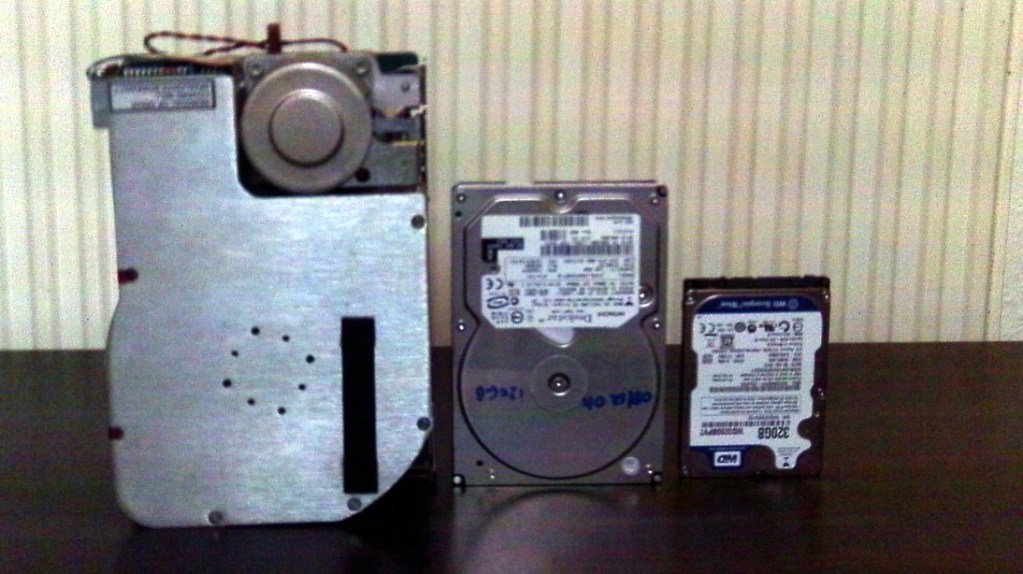 If it's anything like the IDE drives we first had in our XT, I'd say 10MB (our 2nd drive was a stonkingly huge 20MB)
Top

Xac wrote:If it's anything like the IDE drives we first had in our XT, I'd say 10MB (our 2nd drive was a stonkingly huge 20MB)

Not far off, must be a top range one as its 30MB

I wish I could find a good picture of the CDC cartridge drives I worked with in the 80s. Size of a washing machine and 80Mb

My favourite old peripheral though was the band printer.. Used to love fixing those. they were animals and took no prisoners...
Top

I've seen pics of those Jim but never seen (heard!) them in action.

Not sure what you mean by band printer though, I'm sort of picturing a daisywheel or ancient large dotmatrix (9pin?) as they had a band of tape...
Top

CitroJim wrote:I wish I could find a good picture of the CDC cartridge drives I worked with in the 80s. Size of a washing machine and 80Mb

My favourite old peripheral though was the band printer.. Used to love fixing those. they were animals and took no prisoners...

and didnt the disc's hover on compressed air
Top

SASI stands for Shugart Associates Standard Interface, and later was adopted (with slight modifications) as SCSI. The founder, Alan Shugart, was responsible for a lot of the early computer innovations.

A colleague told me that the company he worked for (a long time ago) had a cylinder drive. This was a huge cylinder (that weighed a couple of tons) that took a couple of days to spin up to operating speed (and the same time to be spun down to a stop). He was on holiday when the company found out the oiling system had failed. They found this out in a VERY spectacular fashion. One of the bearings failed, and the cylinder decided to go for a waltz around the computer room. Fortunately this was in the basement, so it didn't drop through the floors. Unfortunately the basement area had the supporting pillars for the building, so it had to be evacuated while they were surveyed to see if they had taken damage. Luckily they had not. Mind you, the computers hadn't enjoyed the waltz!
Top

That is a great story James


citronut wrote: and didnt the disc's hover on compressed air

They did Malcolm and a serious problem was a head crash when the cushion of air was broken - usually because of dirt in the air supply - when the heads dived into the platters. You smelt it first and then you could see great gouges in the platters where the heads had dug themselves in

The disks spun at a fair old speed and they took a good few minutes to run up to speed and down again. Not as long as your cylinder James but quite a time.

Head replacement was a very skilled job and left to a very specialist company who used to inspect all our disks every six months for trueness and any head crash damage..

A band printer was a very high-speed printer that was perhaps better known as a line printer. It printed a line simultaneously (or as near as makes no odds) by striking a row of 80 hammers almost simultaneously against the required character as they whizzed past the hammers on a very fast rotating metal band band. The characters were embossed onto the band. Its printing speed was phenomenal and could print as fast as the computer could send to it and the reason for the great speed was that was cheaper than using valuable memory to buffer the stream of characters to be printed. When you only had 128K to play with every byte was precious.

Printing was accompanied by lots and lots of noise and drama and failures could be spectacular. The ink ribbon was a big version of a typewriter one but had to be kept moving at high speed. If it stopped it would be hammered to bits in an instant. Paper jams were epic!

So noisy was the printer it had to live under an acoustic hood.

They were fun and I loved them to bits...

Toward the end of their life I used to love playing tricks on apprentices. I'd stand them by the printer with the acoustic hood open and nonchalantly stroll over to a terminal and initiate a printer test.

It was good fun to see how high it would make them jump..

I miss those days...
Top

My Mother used to manage the Logistics division of D.E.C. in Winnersh Triangle, Reading. One day a really urgent item came in. It was a drive pack (with critical data on it) that had been in a university lab that had caught fire. DEC made no promises, but they said they would do what they could. They repaired the damaged wiring, and put it onto a drive unit. The pack spun up, so they promptly connected up another drive unit (with a blank pack), and managed to get over 98% of the data before the damaged pack finally quit. The university was delighted (they hadn't expected ANY data could be recovered).
Top

CitroJim wrote:I wish I could find a good picture of the CDC cartridge drives I worked with in the 80s. Size of a washing machine and 80Mb

My favourite old peripheral though was the band printer.. Used to love fixing those. they were animals and took no prisoners...

When dad worked for Uncle Gaddafi in Libya, he had two routes to get there.
The closest to home was from Southampton via Amsterdam, but unfortunately the customs officers there took a dislike to dad. When we saw him get off the little twin prop plane, we knew we had an hour or so before he'd make it through to us.
One evening flying out, he had to take one of those 12 platters. One of the little @#£%'s at Southampton refused to allow dad through security stating that there was an embargo on taking computers to Libya. No problem, dad told them he'd just fly out from Heathrow the next morning instead.
At 1am he was phoned by the @#£% to be told that someone would be waiting to prevent him passing through security at Heathrow, obviously wanting to disturb dad's night's sleep. "No problem, I'll see them in the morning, thank you" dad replied before hanging up.
At Heathrow he went up to one of the customs officers and said "I think someone is waiting for me" and explained what had happened at Southampton.
The officer replied "But that's just a hard drive isn't it? Blimey, I haven't seen one of those in donkey's years! Tell you what, I'll take it around the X-ray machine rather than through it just in case" and couldn't have been nicer.
Actually, the only problem dad had with the guys at Heathrow was his first return journey when he'd taken a coach across Libya (past the IRA training camps) to Tunisia, then a quick hop to Paris via Malta, before landing at Heathrow. He walked up to one in the green channel and said "Do you know I've come from Libya and not once has my hand luggage been X-rayed or checked?" They offered to check it for him and he replied "No you're alright" and just walked out!


James, my first job was for DEC (through a subcontract with Circo) for DSSD at Farnborough

I later regularly worked at the Winnersh triangle for NTL
Top

That item in the photo link is similar to the system I was on about. The clear unit on top is the drive pack.
Top
Messages: 12 • Page 1 of 1