I know there are a few guys on here with Voodo knowledge.

Got a compressor which was faulty. Took it because it fits nicely in garage,is real quality also quiet when it was working. Also my Chinese dd one is only going on one cylinder ATM.

It is belt drive with a little cast v twin pump .

This is motor plate. 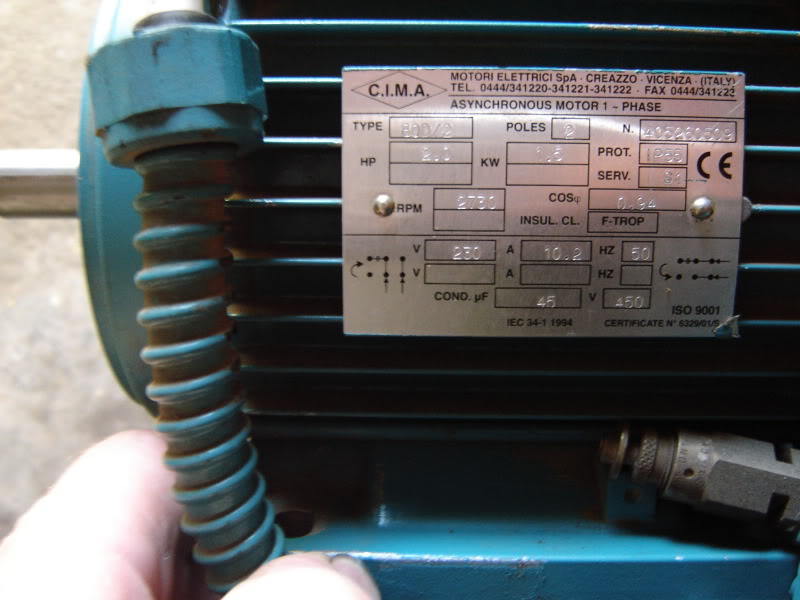 The run Cap suppled had the values that motor seemed to require.

On connecting up through the unit. with all belts off the motor turns the wrong way very slowly and then trips after 5 secs. No burning or indications of it. Guy gave me another S/H motor the same. It does the same only slightly faster.

I have taken that Cap and put it into Chinese DD Comp. It runs fine. Cap from this unit on the problem unit does the same.......ie runs slow then cuts out.

Resistance readings on individual poles of both the motors( 2 pole single phase) give a closed circuit reading of zero. I have ordered a 50uf 450 volt Cap to try. Ether that or I have two dud motors??
Top

They do fail on the Chinese compressors fairly readily but they let you know normally with a kaboom! and spilt guts. I've replaced a few in the past.

That fact the capacitor works OK on another shows it is good. Also a known good cap does the same thing.

I'd say the motor has a weakness and they all display the same fault.

You're sure it's wired correctly?

The value of the start capacitor is not that critical. It's voltage rating and internal protection is the most vital part. If they went short circuit the motor would burn out very quickly as the start winding is not indended to be energised for more than a few seconds.

I recall a true tale of an old boy who used an under-rated motor on a big sawbench. He thought he had the most wonderful motor. He told of how it would change gear as he was sawing a particularly tough piece of timber and the motor slowed. What was happening was the motor was slowing enough due to the heavly load to switch the start winding back into operation, hence the motor seemingly changing gear...

needless to say, that motor did not enjoy a long life...

Lexi, I hope that sheds some light...
Top

Thanks Jim.............excellent. I took a photo of the wiring on an identical running compressor. So am quite sure it is wired ok. Will look for another motor to try.
Top
Messages: 3 • Page 1 of 1