As the title says my 2.1 is giving me a few headaches

The symptoms are as follows.

Every so often when driving the car between approx 1800-2200 revs in any gear the engine rattles a lot, like the really old style transit vans, although once out of this rev range the car is fine.
I have had the pump replaced recently and has been good as gold.I have taken it to my local garage who unfortunately dont have the Lexia or equivilant but they have managed to get the car to rattle but only when driven and under load,never stationary.They are saying that the pump is over advancing for a short period just as the turbo kicks in.

The only things i have noticed are the following.
1. The problem only arose after i had done an oil/filter change
2. When on "normal" roads it seems to happen just after exiting a roundabout and the fuel guage drops to reserve before returning to normal when the rattle stops.
3.Until this evening it never happened until the engine was warm.Tonight it started within 500 yards of starting the car after going over a speed bump.The rattle lasted about 20 secs until i went over the next speed bump.

Pretty sure i must have disturbed something when either doing the oil change or trying to fix the breather pipe from the rocker cover to the sump.

Any and all ideas welcome

Do these have the tiny 'vacuum' (well, boost) pipe between pump and manifold ?

I guess that is kind of in the way when doing an oil change in that its easy to catch, it would be worth very carefully examining said pipe for any splits etc.
Top

spider wrote:Do these have the tiny 'vacuum' (well, boost) pipe between pump and manifold ?

No, they don't Andy. they have a MAP sensor on the intercooler. A little square box on the right hand side of it. There's also an inlet air temperature sensor on the pipe that goes to the inlet manifold.

Timing is under total ECU control.

It really sounds like it's electrical Colin. Sounds almost like the ECU is loosing its power supply briefly.

A Lexia should help to diagnose this although yo may need to do it live on a road test.

Also, on the Lexia, you can run actuator tests on the pump to check it's advance characteristics and speed control. One test takes it from full retard to full advance and at full advance it knocks like an old transit!

An other test takes the speed to 3000 rpm and holds it there.

The Lexia may also reveal a stored fault.

See MikeT as soon as you can Colin, I reckon he'll enjoy the challenge

Can I assist in the meantime with some wiring diagrams? You may need them.

Can't see how an oil change can have caused this....

There's a clue in the fuel gauge though... I must look at wiring diagrams...
Top

Thinking back i did change the middle section on the exhaust and did have a bit of a struggle getting it onto the cat section.Could i have disturbed anything connected to the exhaust manifold whilst manouvering the exhaust

I can hear what i believe to be the turbo whistle which the boy says wasnt there before i did the exhaust.Must admit there was a fair bit of play in the cat section

I have had the top cover of the inlet manifold on and off a few times and there is what i believe to be a small pipe running either side of the section marked in the pic. 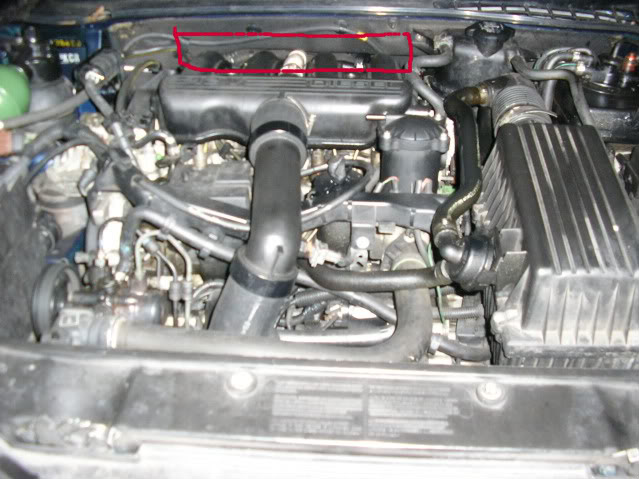 Could the timing belt have jumped atooth on the pump sprocket and the ecu is struggling to advance/retard the timing under certain conditions.It does seem to start a bit "harsh"

Does this help any or just muddy the waters further

admiral51 wrote: Does this help any or just muddy the waters further

No, actually Colin, it helps

The pipes are the EGR valve inlet (the metal concertina one) and the one running across the back is the EGR vacuum line.

That won't be the cause I'd not have thought and nor will an exhaust leak or a turbo whistle.

You may have struck a chord with the timing though. When the new pump was fitted, did you check carefully the static timing setting?

Worth double-checking the belt timing too. It could be running out of adjustment range.

I have the instructions for static timing and will dig them out along with the wiring diagrams Colin. It'll be tomorrow now. Is that OK?
Top

You may have struck a chord with the timing though. When the new pump was fitted, did you check carefully the static timing setting?

I did have guidance in removing the belts etc but wasnt present when the pump was removed and refitted.Come to think of it not sure if the battery was disconnected for removal/refitting of pump.Im 99% sure i didnt have to reset the radio code

CitroJim wrote:
I have the instructions for static timing and will dig them out along with the wiring diagrams Colin. It'll be tomorrow now. Is that OK?

Just some random suggestions before we get the Lexia on it at the weekend...
EGR - could it be sticking?
Exhaust - it's probably leaking at the downpipe gasket which is why you can hear the turbo spooling up (can you smell exhaust in the cabin occasionally?), but could it also be blocked/restricted at the cat?

I'd imagine either could be contributing to the running problems you've reported.

And when it was misbehaving, did you notice any visible smoke from the exhaust?
Top

CitroJim wrote: There's a clue in the fuel gauge though... I must look at wiring diagrams...

Any advance on this line of thought, Jim?
Top

CitroJim wrote: There's a clue in the fuel gauge though... I must look at wiring diagrams...

Any advance on this line of thought, Jim?

Well, it's just a nagging suspicion I have in the back of my mind that the ECU runs the whole dash in an EPIC...

I must get the diagrams out and will as soon as I get home..,

Good thought on the EGR Mike. It will disabl;e in the normal way, just pull and plug the vacuum pipe...
Top

here's a flood of diagrams!!!

Now, the only connection really between the fuel gauge dropping and the knock is the ignition switch or the giant fuses.

It might be worth following a path down the road of checking to see if there is a momentary drop in voltage due to a bad contact on the ignition switch causing this problem.

I'd check the belt timing and pump static timing just to be sure. The Pump timing is easy...

Hope all that lot helps a little Colin...
Top

Question 1. If the EGR valve was sticking why at a specific rev range.
Question 2. Where is the EGR on the 2.1 and how do i disable it
Question 3. How easy is it to get the pump timing wrong when fitting.Am i being stupid(forget that yes i am

) but i thought that the pumps all had timing holes that meant they couldnt be timed wrong or is it the static timing on the epic is different.

Mike, i will give you a call tomorrow to arrange a time for the Lexia session

No question is stupid..

1. I doubt it's the EGR but no harm in disabling it.

You cn check if it is leaking by undoing the clip at the end of the concertina pipe where it goies into the inlet plenum and feeling for exhaust gasses issuing from the end of the pipe. If none, the EGR valve is gas-tight. Run the car with the valve disabled and se if any difference.

3. The EPIC pump is mounted to the pump cradle on three studs and a stud on the rear bracket. Note the holes in the pump flange and bracket are slotted. This allows the pump to move relative to the pump cradle to set the static timing of the pump. This timing setting is in addition to the normal belt timing using the holes in the sprockets. that needs to be checked and then, when you know the belt timing is good, then do the pump static timing using the instructions.

If the static timing is out, the pump may be running out of electronic timing range under some conditions. Essentially it sets it to a point where the electronics can give the pump the maximum range of timing adjustment.

Knowing how critical every other aspect of diesel timing is, I expect this static timing setting to be important and not something you can do by ear.

Funny, I have trouble with those ring-pull cans Colin. I often end up pulling the ring off and leaving the lid firmly on the can. I resort to my old faithful old-school tin opener then

Is that clearer Colin?
Top

Thanks Jim much much clearer,i have a nagging suspision that maybe the static timing of the pump may not have been done,just the usual timing holes used...will need to double double check

admiral51 wrote:Mike, i will give you a call tomorrow to arrange a time for the Lexia session

If we're still on this weekend, I'm thinking it might be better I come to you as my "workshop" is the car park and there's no facilities, should we need them. What do you reckon?
Top

Have one for sale and will be cheap should you need one or injectors
Top
Messages: 25