Is the engine a PRV Dean? It doesn't quite look like my Es9.
Top

Yes James, a PRV 12v, the ES9 24v didnt turn up untill about 5-6 years after my XM was made and was mated to the 4HP20 electronically controlled ZF gearbox not the fully Mechanical 4HP18.

Thats going to sound so good, you'll be giggling like a little girl when you fire it up if you are anything like me.
I can't make the IOW car festival you invited us all to attend but I'm not that far and I think our V6s should hang out sometime in the future.
I'll investigate ferry prices when finances are a little better.
Feel free to swing by if you are on the mainland anytime.
I'm not actually Southampton but near Romsey.
Top

Ok (back and forth we go!) ive now sort of got the right wiring diagram, after using the incorrect one twice.
Most recently working with the US 83 variant wiring diagram got the keypad functions working correctly but its just no switching power to the correct places!, this is a simple problem to rectify IF i can pin down the right wiring diagram. I have at least now proven the car wiring will work with anything when plugged in but the keypad has to be wired correctly in the cabin to power the injection/fuel pump relays for each specific type of ecu and engine wiring harness layout, working with this latest diagram i can power the ignition, or fuel pump but not both which isnt helpfull, its almost like wiring the relay trigger from the keypad to get the ignition to work will lock out the fuel pump even if jumping power directly to trigger the relay or vice versa, it just wont work.
Thanks to the link to the mass of scanned wiring diagrams ive pulled out the correct ones for the Fenix 3b UFZ injection system which is what the Lexia says it is but unfortunately there are several diagrams for this ECU variant, they are all titled 515-22/40 but there is the following diagrams;

The trouble is all these wiring diagrams show the keypad wired slightly differently so i kind of need to know how to pin down this ecu variants required keypad wiring diagram, is there any way i can use the ecu number to use the right diagram as it seems they changed keypad wiring layout through the production like you change socks, i mean there is 6 different potential wiring layouts for just this 1 ecu variant by the looks of things!.

Help finding the correct wiring diagram or info on how to find the right diagram would be very much appreciated at this stage.

Im pleased to report the old PRV problems have been overcome and this afternoon she fired into life, turn the key and it just started straight up, does sound throaty with just the headers fitted

Be good for the X Rally on Sunday then

Nice one Dean......good result after a great effort.
Top

Be good for the X Rally on Sunday then

yep, if i start pushing now i might make it

Ive nearly got all the hydraulics back on this evening and all of the engine bay wiring is done, progress is coming thick and fast again, which feels good!

Well in recent days the road has been long and testing, i wont bore you with the details, actually i will as the more perverse among you will find this hysterical, after sorting many a problem including failed injectors and incorrectly wired components i discovered i had timed the engine up incorrectly and had the rear cam 180 degrees out of phase with the crank, basically the rear bank was having the spark triggered at TDC on the exhaust stroke, all the suck, squeeze and blow was there, but there was a distinct lack of bang and (as i found out) this is a rather crucial part of the whole series of events that make an engine work.

I would prefer not to talk about this just yet, its still a tender recent memory, but please, if it brightens your day feel free to snigger among yourselves, im sure i will when this project is over.

10 hours of doing this however 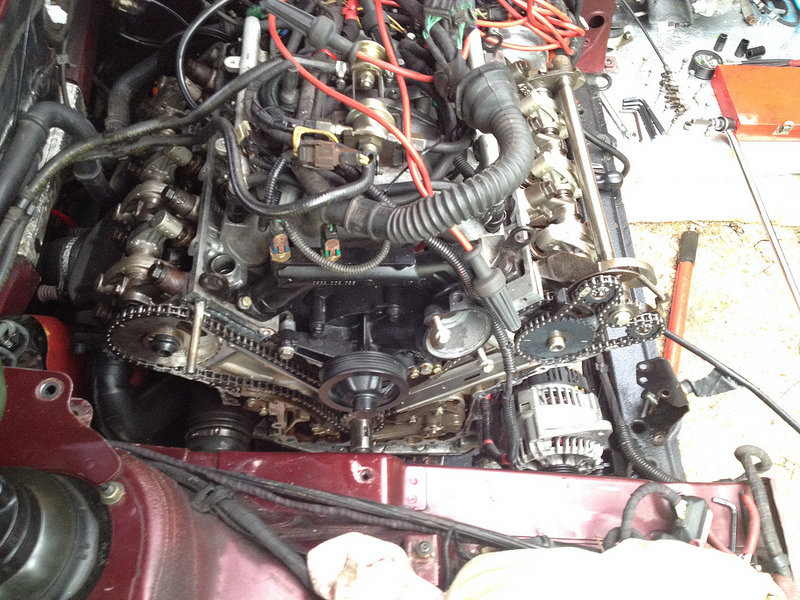 IMG_3270 by Deanxm, on Flickr
has this evening resulted in this


Now there is still a bit of a running issue, and as your can see a bit of reassembly and of course the time consuming details, and im certainly not out of the catastrofic problem phase but im claiming a partial win on this one if you dont mind.

I said snigger amongst yourselves, not where i can hear you!, cheeky bugger