Another one bites the dust!

Another one bites the dust!

Hey all,
Today I received an unexpected phone call from those nice chaps at B&L autos WGC, come along to the garage at lunch was the message, and bring a camera.
Something to do with a V6 in a bad shape.
Curiosity peaked, I duly popped along to their garage at lunch time to see what was going on.

When I arrived Robert showed me to one of their, adjacent car storage facilities, as we were walking there he told me that we were off to see their latest arrival.
A Xantia V6, a light green one no less, not to dissimilar to mine. The only snag was this one had very recently suffered a minor accident, which had damaged the front bumper. 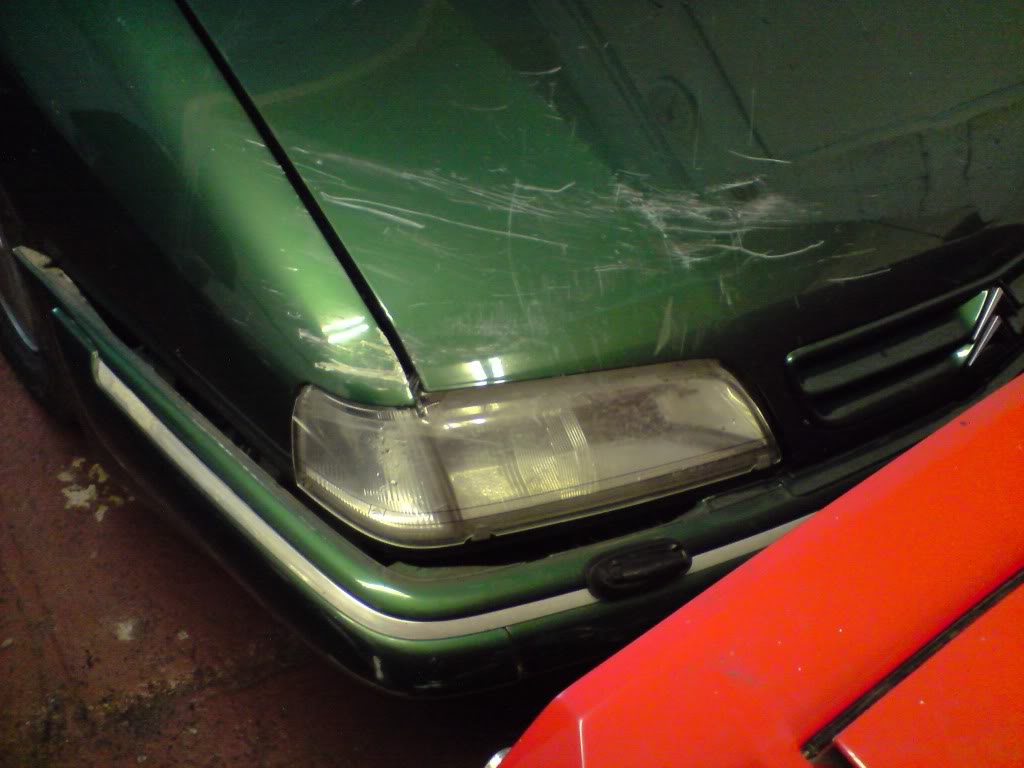 But thats not all.... oh no.
Apparently the driver had skidded and ended up an embankment, drivers door firmly wedged in the hedge, meaning exit from that side of the car impossible

Now this is where the story gets hazy in my memory, so please forgive the somewhat vagueness of the next few sentences. What I know is the emergency services were summoned, at what point I don't know, but the ambulance crew were on scene, when it became apparently to the driver they could not get out the drivers side door, the driver decided to clamber of and exit passenger side. However half way betwixt the two doors something went in their back, and they were suck. The ambulance crew fearing a serious medical problem summoned the fire service, who efficiently and quickly removed the stranded motorist. 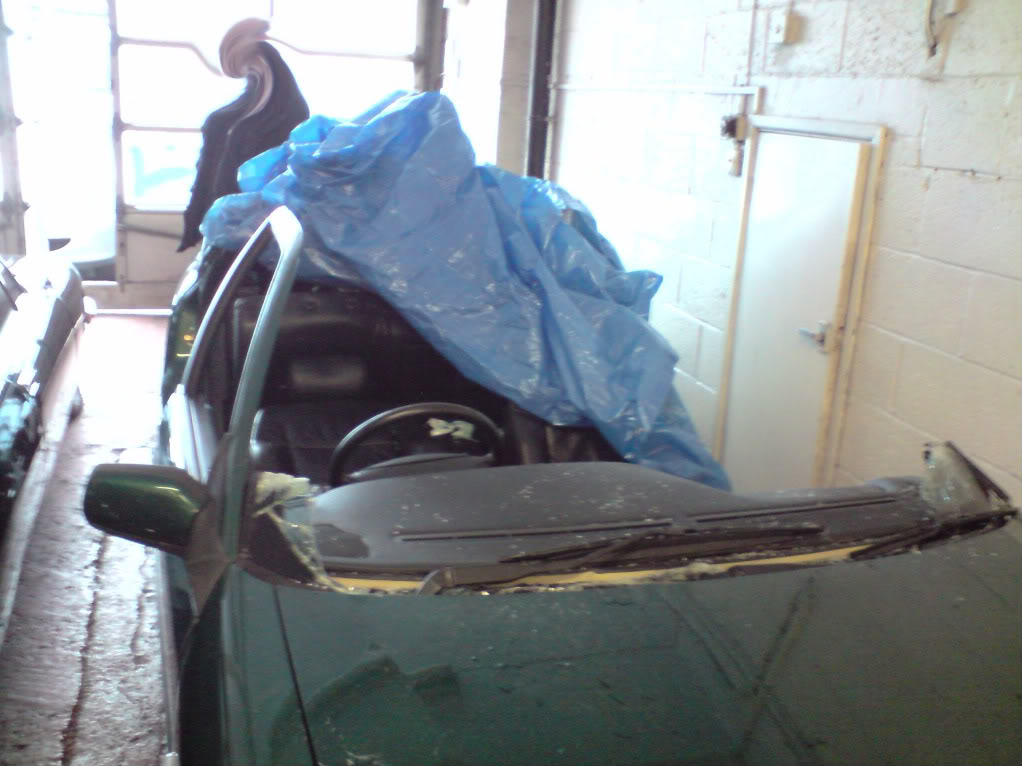 Here are some more pics of the gruesome 'conversion' 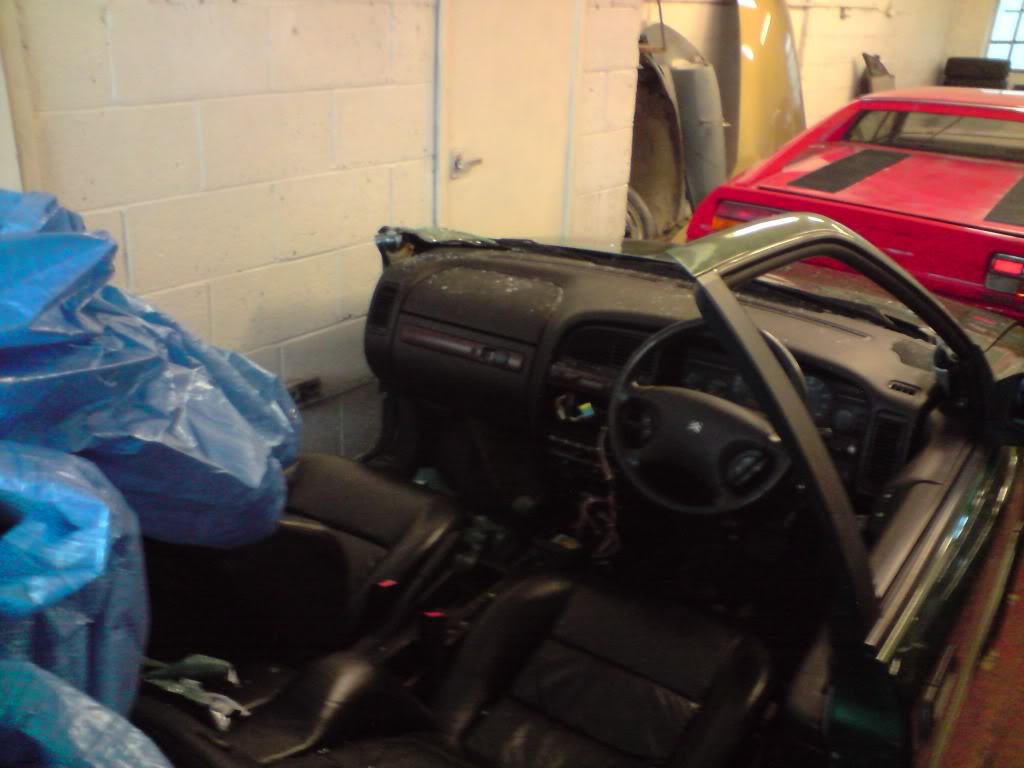 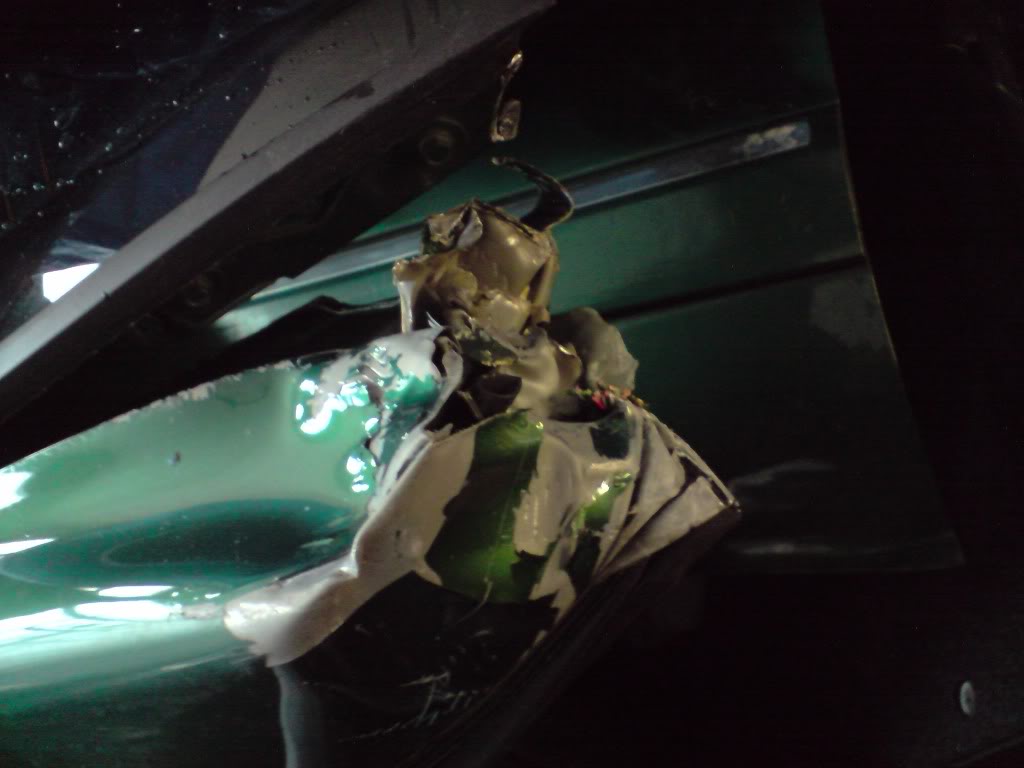 The really sad thing is I saw this car in waitrose car park WGC only a few months earlier, and it was in fantastic condition. Here is a before shot. 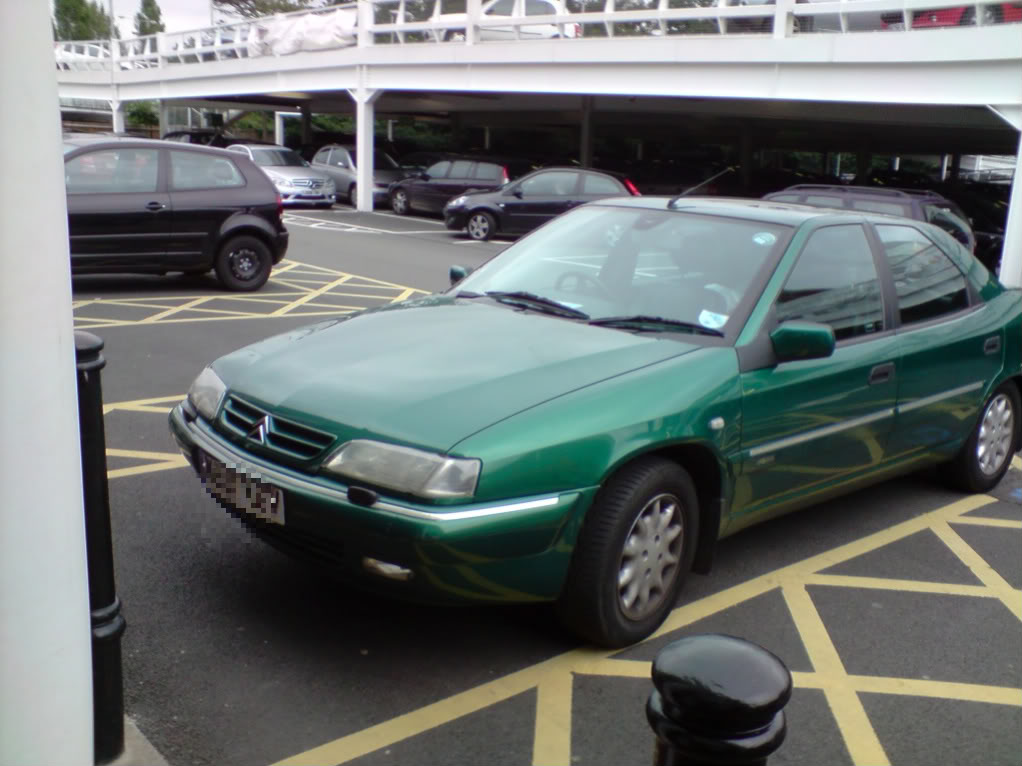 So there you have it folks.. what a way to go

Those "Splash and bash" boys just love cutting things, as soon as they turn up to the most minor of prangs its out with the bolt croppers on the battery leads and just give them the slightest opportunity to get the big stuff out and they are as happy as Larry (and he's always very happy by all accounts!).

.........or if you like what you see above.............if the owner is ok, and i presume he is judging by the minor damage, dont you think he is kicking himself right now just crawling another few feet could have saved his car although i shouldnt jest since i dont know how serious it actualy was.

It was my car

I was the owner and driver of this car. BTW I'm a she and yes I am fine - it was a low speed accident. The air bags did not go off and I am pretty certain those scratches on the bonnet were caused by the Fire Brigade and not me.

The car ended up a bit in the air when it stopped, so it wasn't very easy to hold the nearside doors open for me to crawl out and looked rather precarious. It happened just after the school run on a very icy back road that is never gritted. I had deliberately aimed up a grass bank into the hedge to avoid a school bus.

My back didn't really 'go' as such. Another mum was first on the scene and when I suggested climbing out, she recommended I stay still still. Then as said I was hurting (whiplash I thought), an ambulance was called.

Once they arrived and I foolishly explained that I have a history of back and neck problems and was hurting, they basically gave me no option but to have the car cut up around me. I was in shock and upset and had I been in a clearer frame of mind, I would have stopped them, but they don't really give you an option.

To cap it all we had to pay £200 to get the car back as the police decide to take it away to a somewhere you don't actually want it to go to (it was not blocking the road) and another £100 to get it moved back to BL Autos.
Top

Welcome to the forum Chloe, good to hear that you didn't suffer any significant injuries. Reading your description of the whole incident it appears that had you managed to open the door and get out of the car it would have still been driveable and maybe needing just a little bit of paint, unfortunately I've seen this happen far too often, a minor scrape turned into a major incident

Yes, as Mr. G^^ said, welcome aboard Chloe and pleased to hear that your injuries were no worse than you describe.

Can't blame the emergency services for taking the best possible care of you and what may have been serious spinal injuries and being rather less than gentle with the car. It is after all replaceable. You aren't.
Top

Thanks. Yes I agree the emergency services do a fantastic job, but it is a question of scale. The damage to the car was small and the likelihood of me being seriously injured was slight. To be honest the pain and discomfort on the spinal board outmatched anything else I suffered that day. This whole saga also tied up an ambulance, the police and two fire engines for about two hours.

There was another interesting couple of points too. The ambulance crew thought they saw sparks in the radio area (is this likely?) so they disconnected the battery, but had to connect it again later to get my seat to go back!

Then my husband was called but he was told I was on the ambulance on the way to hospital in Harlow, when in fact it was over an hour later before I really was. When he got to there, no-one could find me. They rang round other hospitals, but there is no easy way to find out which ambulance crew a patient might be with. Another crew offered to radio around to find me, but no-one could find me until I actually arrived at the hospital.

Why does this matter you might ask? Well first you are completely lost in system once an ambulance attends, so who knows where you are, but more seriously no-one ever let my husband speak to me so he had no idea whether I was alright.

Don't get me wrong, I am not being ungrateful to the emergency services, but I would suggest they are applying an over enthusiastic level of risk assessment in case they might harm somebody and they don't really give the patient the opportunity to think for themselves. If you applied the same level of caution to the sports field or riding arena, there'd be no ambulance crews left.
Last edited by Chloe on 15 Dec 2009, 09:36, edited 2 times in total.
Top

PS I am curious to know why early everybody who post photos of cars blank out the number plates these days.

Is there a legal obligation to do this or are people just being polite and careful? Or is it simply because the TV have started doing this? Anyone can see a car's numberplate if it drives past them! Thanks.
Top

It was a frequent occurrence for the scallys to reproduce a number plate, fill their car with petrol and drive off leaving some poor unfortunate to try and explain to the police why they stole £60 worth of petrol.
Or to give someone a headache when they received a speeding fine for somewhere they had never been. Not easy to explain that one away.

They asked to speak to her husband, who was away sailing at the time. Demanded to see their car (Rover 620) which was locked away in the garage. They practically pulled it to pieces and explained that although everything appeared to be OK, there was an identical 620 parked near Downing street, same number and everything and had been there for a couple of days.

Never heard any more about it but it probably helped that my friend was associated with the Customs Service on their drugs investigations so had some credibility with the police. Bit of a shock when he returned home though.

Agreed that at least in your case the emergency services were somewhat over zealous and keeping you from speaking to your husband served no useful purpose whatsoever, just the opposite.

Hope you have recovered from the ordeal by now.

Will you be replacing the car with another like it? Some good ones show up here from time to time.
Top

I'm generally a non-blanker when displaying photos with plates. I mean, if someone didn't really want their car photographed out and about - they might consider revising their mode of conveyance!

With TV, perhaps it's to prevent undue harrassment, or if a serious accident, to cover until all official notifications have taken place?

It was a nice car!

Green cars are too hot for here, but the colour reminded me of artificial lime flavoured sweets or cordial...
Top

Hi Chloe,
I hope you are not offended by me posting the results of the unfortunate incident here on the FCF.

I’m sure all of us double chevron lovers here sympathise with your loss, good condition V6’s are becoming rare, although in saying that I’m sure Robert will find you a good one.

Welcome to the forum, stick around, everyone here is helpful and friendly

Already got another V6 Xantia

I already got another one from Robert which I drove home tonight. I'm now on my 3rd one! This latest is the same age, but is not as tidy as the dead one and has done 130k instead of a mere 70k. However it's pretty damn good really though. Robert and the rest of BL autos & co have done a fantastic job finding it and bringing up to scratch!!
Top

welcome to the forum chloe, glad you're ok, obviously the emerg services were staying on the safe side when they cut the car, but not letting your husand speak to you was beyond silly, there is a massive lack of common sense in this country now,

about the car, shame they had to be so drastic, maybe you will salvage all the parts for money, like then engine, box, seats would be worth a few bob too, exhaust etc.

disconnecting the battery is normal practise for the emergency services, but it's usually the fire crews who do this to avoid an explosion in case of fuel spillage, not sure why there would be sparks there, lots of switches in that area.

anyway, glad ur ok and do hang around, it's a nice forum this, one of the best around!
Top

Ta. Dead car already sold back to Robert the day after the incident.
Top

Thats ok then, not a complete loss. So you got yourself another V6! How jammy are you! I wish I could run one, if i could I'd have one, they are rare now.
Top
Messages: 16