A whole week working on my car!

A whole week working on my car!

Now this hasnt happened for a while! It's a year since i fitted the paddle clutch but since then its hardly been driven.

When i worked as a wheel refurbisher i painted my wheels a special mix of silver/black, which came out a bit like a bronze gunmetal. They looked good, but imo made the car look a bit dirty, so one of the tasks this week was to paint them silver again.

We have a manual bead breaker which made light work of the tyres so the wheel could be prepped properly, the end result now looks like this -

For some time now the NS b pillar had started to bubble and i knew surgery was required, so i bite the bullet and chopped it all out, sandblasted behind it and started to plate it tacking it in bit by bit to avoid distortion as the metal is not that thick.

There was also some bubbling at the NS rear C pillar join at the back of the sill, after some probing i also found another hole at the back on the sill, so this had to be cut out.

Unfortunalty not long after i took this picture i decided to cut through my thumb with the angle grinder when i turned it on, let me tell you now the pain is pretty bad but after some pain killers and some strapping to keep it together and finished off the welding.

Then the primer went on -

And then a couple of hours later, it was painted -

The end result is pretty good as i've not done bodywork for over a year.

I've also had to overhaul the braking system, replacing all the flexy hoses, rear brake pipes and the entire line from front to back and one of the fittings stripped as it came undone, however its never simple..

I fitted a big brake conversion 2 years ago and over time they have failed to perform as expected, the pads were not a decent fit on the discs and they were binding, so i decided to fit standard discs and race pads as i dont drive it that hard anymore.

For some reason they were binding and the system wasnt even bled! It appears the extended brackets that space the caliper out to accomadate the bigger disc had put excess leverage on the mounting holes on the hub, this was now causing the caliper carrier to bind on the disc.

At this point ive left the car as with extensive injuries like getting something in my eye and causing me agony (its better now) cutting my knee and the brake caliper dropping onto my little finger i wanted a bit of time out. I did tap the mounting lug on the hub and it bent back a couple of mm which stopped the binding, so i will do the same to the other side aswel, replace the other wheel cylinder and get the system bled.

The plan was to get it mot'ed this Sat but i simply run out of time encountering various problems that slowed me down. I definatly dont miss welding thats for sure but the end result will be worth it! Now its time for a rest before work on Monday and hopefully it should be sorted before my birthday in a few weeks, which will be my present!

Here's my toy - a few similarities with yours, but your one's shinier! 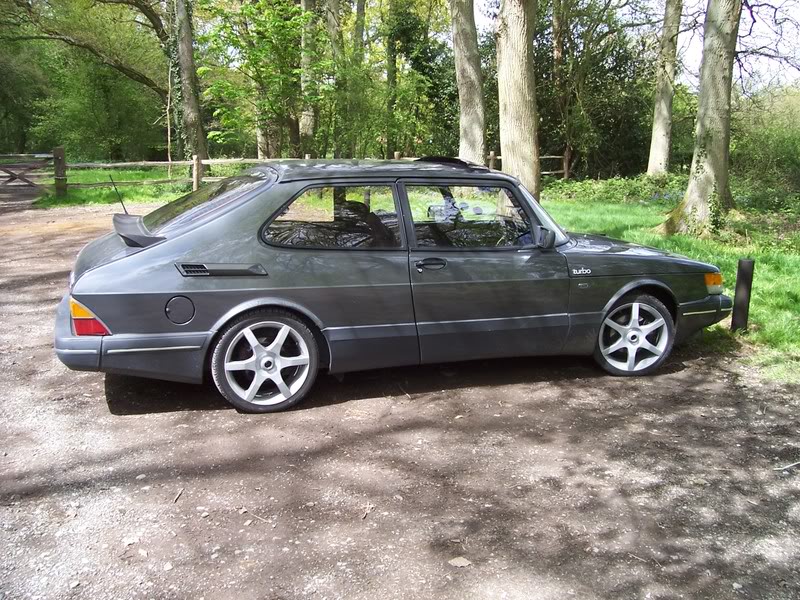 Need to refurb my wheels too, got them cheap off ebay - not in the best condition.

Haven't driven it for a few weeks, just torqued the head down yesterday after HG change.
Top

Had forgotten about this thread!

Yep, both old school and turbocharged, is that a 16 valver?

I may be able to do a good deal on wheel refurbs as i start a new job end of August...
Top

Yep, 16 valves, made 196hp on the rollers a few months ago with just a tweaked APC (Saab's electronic boost controller).

Might take you up on the wheel refurb thing - maybe PM you middle of September when you've got your feet under the table?

ianrobbo wrote:Yep, 16 valves, made 196hp on the rollers a few months ago with just a tweaked APC (Saab's electronic boost controller).

Might take you up on the wheel refurb thing - maybe PM you middle of September when you've got your feet under the table?

Sure no problem, where in the country are you? I'll be in Kent/Surrey area. I assume 196 was @ the flywheel? What boost was that?
Top

Live in Sussex, work in Surrey.

I rather like the old school Saab Turbos Ian, and yours looks a cracking example

We'll have to start working on your desire to own an Activa very soon. You may not have that desire just yet but stick around and it'll happen

Must say something for the demographic of this forum...
Top

How do you adjust the APC? Do you ever get boost spikes? I have to compromise with mine because of the bigger turbo and lack of space, the actuator has very little room to actuate at a good angle, got boost sitting at 11psi peak and then dropping off a bit to around 10psi off the standard -31 actuator, which is a 7psi spring.

I'm going to fit an MBC back onto it now i've played with the angles, the activa has the old valve off it, cant wait to get it running 16-17psi again but i always had problems with it creeping top end, i suspect because the actuator arm was too short and prevented the actuator opening fully. Now i've resolved this issue my EGT's should be a bit lower aswell!
Top

I appreciate your thoughts, but I do NOT need another car!

I really enjoyed owning my BX's (4 GTi's & a diesel) and when I learned I'd be changing jobs and need an economical diesel, which would also double up as a family car,what other choice is there but a Xantia?

The APC is basically a knock controlled electronic boost controller - the knock sensor backs off the boost when it detects knock, allowing Saab to use quite a high comp ratio and also enable the use of lower octane and/or poorer quality petrol. There are two ways to tweak it - there are 3 variable resistors inside, one for max boost, one for boost rise rate, and one for knock sensitivity. You can simply turn up the max boost pot - simple as that. That's the easiest way to tweak it, there's also a well documented mod out on the net, where you change a couple of resistors on the pcb, which helps with max boost and also holding the boost at high revs. Dead easy.

Many of the Classic 900 owners also fit front mounted intercoolers and 3" exhausts, 220bhp is quite easily do-able for not too much money, but the gearbox is a bit on the fragile side so you don't see many outrageous ones. Can't say the same for the 9000 guys though - some of those guys really go to town, as much as 500hp! Crazy talk for a fwd! www.uksaabs.co.uk and www.saabcentral.com are the two main UK based ones (although Saab Central is very popular on the other side of the pond, and in Oz) and www.900aero.com specifically for the 900.

How about yours, is there an active MG Turbo scene?

There is a scene for them, i used to be a big part of it but its clicky and its not really for me anymore. I learnt alot of the years from it all and its only now i'm starting to enjoy the car more!

The boost control sounds quite sophisticated actually, mine originally is just actuator only. One day i'll get a proper electronic boost controller and save all this messing about, i just want solid boost throughout the rev range!
Top
Messages: 10 • Page 1 of 1