Just got round to bleeding the brakes on my Visa, then with very little pressure on the spanner, the front nipple sheared off flush. no chance of getting it out !!!...

So I picked a spare BX rear one I had in my box of bits that had a similar fate. and set about using this as a test bed...

I carefully drilled the remains of the broken nipple out in stages, to try and eliminate the drill running off centre, this worked, and I tapped the new hole 8 x 1.25..

I then got some 8mm screwed rod and fabricated a new nipple, using just a drill, files and hacksaw blades.

Drilling the hole down the rod, and keeping it near the centre was quite tricky, but managed it.

Now I will have a go on the Visa caliper... 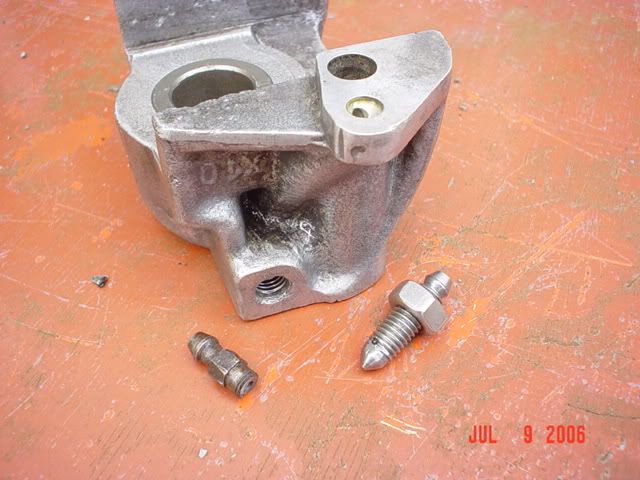 The End Result - Showing part of the old, and the new nipple 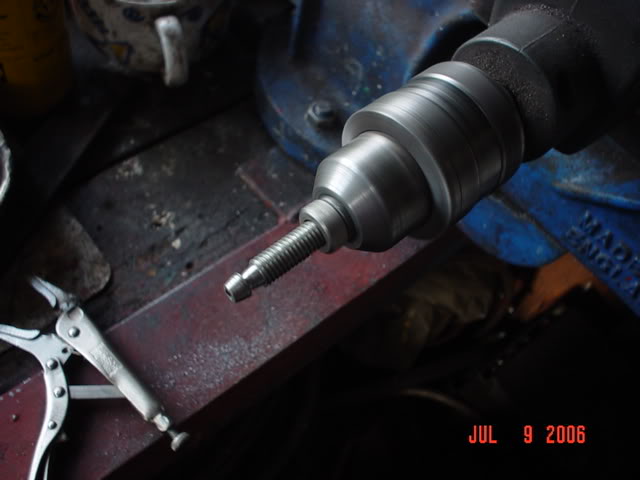 Performed the above on both the Visa Calipers, and the drillings went slighly off centre, so could not use the preformed bleed nipple.

Thinking cap on, decided to gring the pointed end of the nipple off, and smooth on wet and dry to a pollished finish.

Then found a suitable size ball bearing (3/16" in my case), one tap with a brass rod to seat the ball, screw in the nipple and Bingo, works a treat...

Ball bearing method was used on Dunlop disc brakes as used on Mk11 Jaguars and things.

When I did mine I found 2 had no balls in them! - Fun trying to find them over Easter - but motor cycle repair men keep all sorts of useful stuff!
Top

Good work! The ball bearing is an excellent idea.

205 GTi calipers suffer a similar problem. I have done it a slightly different way to recover a caliper that would not adequately seal with an M8 bleed nipple.

On the lathe, I turned up a small brass adaptor which takes an M6 bleed nipple at one end and an M8 thread on the other end. Screw it into the Caliper with loctite and Job done...
Top
Messages: 5 • Page 1 of 1