Norfolk in the spotlight

...and as in most reporting the carefully chosen names of Wetherspoons Pubs are anonymised to "Wetherspoons".

It is "The Romany Rye" now that's better full of intrigue, and the derivation of it not obvious from the name.

Been there but can't say I am and expert on it.

Further information as usual can be found here!

A lovely place, be about 1967 ish we had a great holiday in Norfolk in the black Morris Cowley, stayed right in town in Great Yarmouth toured the broads and the coast, and went fishing and swimming most days. Potter Heigham was one of the places we visited, and quite entertaining watching the boats navigate or not that bridge. Many years later as proper adults we hired a boat for 4 days, and returned to Potter Heigham on the water. Those early childhood experiences of watching the near disasters was obviously still with me, I think I made about 3 approaches but never went through!

My first trips to Norfolk were with the school sailing club Whitsun holiday. We spent a week camped in a farmer's field in Oby just under 2 miles from Thurne Dyke. In the top aerial view of the dyke you can see a white building upper centre of the picture with a car parked in front of it. That building is The Red Lion which used to have an outdoor three sided shed on the right of the car park provided for children who were not allowed in the pub in those days.

We, as 13 year olds, used to sit down in the shed while our Club Commodore, also my chemistry teacher, went inside to get drinks. He allowed us to drink cider so by the time it was hometime, around 10.30pm we were all very happy to walk back to our campsite in the pitch darkness. Many incidents occurred on those walks over the next few years!! I went on that holiday 6 times in all, 3 as a pupil and 3 as an old boy but still very active member of the sailing club. On my final trip I was appointed chief instructor, by which time I was well groomed in the pleasures of beer having had my first ever full pint of bitter on my second holiday aged 14, to teach the newcomers the ways of the holiday!!

The second picture below is taken standing at the end of Thurne Dyke with the photographer's back to the pub and shows the cottage, which used to be a general store, and the famous white Thurne Windmill which sits on the bank at the junction of the dyke and the River Thurne. It was still open for visitors when I was last there for my 60th and I am hoping to revisit for my 70th later this year!!

Some of the Half Deckers we hired, usually a fleet of 6-8, from Herbert Woods boatyard in Potter Heigham are still in use although ownership has been transferred to Martham Boats. This is a picture of one available now for hire, I believe it may be Sunrise one of the originals:

..and number in the spotlight is

I misread the number on my first viewing and went hunting for 47482. A long time followed and the nearest I could find was this picture of loco 47482 taken at Great Yarmouth!!

Bingo I thought and returned here to post it up!! At that point I noticed the number was 47582 so thought blast it, start again. It didn't take as long to turn up the 'County of Norfolk' so here it is in all its glory:

So two for the price of one!!

Bingo I thought and returned here to post it up!! At that point I noticed the number was 47582 so thought blast it, start again. It didn't take as long to turn up the 'County of Norfolk' so here it is in all its glory:

So two for the price of one!!

How are you at accepting apologies Mick

That was my fault. I did post up the wrong number originally, discovered it within say 20 or 30 seconds, and corrected it.

..and an alternative number in the spotlight is 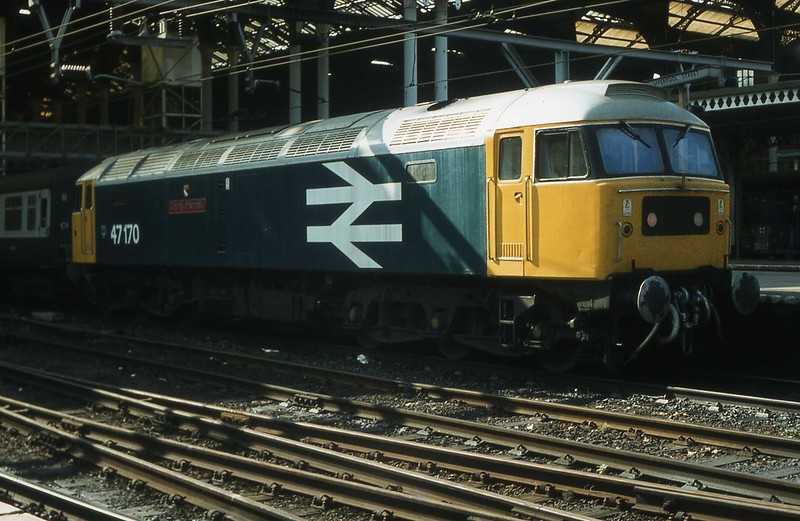 That was my fault. I did post up the wrong number originally, discovered it within say 20 or 30 seconds, and corrected it.

At least I know my eyesight isn't so bad after all!! I was certain about the 4 and quite baffled when I came back!! Apology accepted !!

Never been to Norfolk but I had an uncle who lived there ..........shoes and boots were big business apparently, I recall him telling us that he'd had to fight off thieves trying to steal a lorry load of shoes from his works.
Top

Thanks Mick! Now did you edit in some extra magpies on my POTD yesterday I'm sure there were only 11!

There you are it's not just my eyes playing tricks on me !!

Everything you wanted to know about the Norfolk shoe industry but were afraid to ask..

Sheep-lined British airman boot made in Norwich. Museum of Norwich at the Bridewell collections.

That is an exceedingly serious omission in your travels Gibbo considering you have been all over the world!! I thoroughly recommend you rectify that as soon as possible, whatever your choice, wild life, boating, nightclubs, bird watching, beach combing, etc etc etc, all is available in the wonderful county of Norfolk!!

My dad liked Norfolk, spent lots of time on the broads with his mates.
There were loads of photo's but like most of his stuff, disappeared after he died.

An edit, late to the party as usual.
I read a fair amount of Scandinavian fiction. Swedish in the original but Icelandic, Norwegian and Danish translated.
I finished a Norwegian novel at 05:35 this morning and looked to see who the translator was to find that not only does he live in Norfolk, but has translated the last half dozen books I have read.

One word stood out for me. "Chunter", which I can't recall hearing since I was a teenager, someone I worked with used it frequently.
Top
Messages: 1046