That's excellent service from Duthies of Montrose then. The told me it would be with them on Saturday, and you have got it on Monday! With hindsight I may of been as well ordering all the bits from them and posting direct to you!
Top

That's excellent service from Duthies of Montrose then. The told me it would be with them on Saturday, and you have got it on Monday! With hindsight I may of been as well ordering all the bits from them and posting direct to you!

I reckon you're right there Davie!

I was surprised I can tell you...

That's excellent service from Duthies of Montrose then. The told me it would be with them on Saturday, and you have got it on Monday! With hindsight I may of been as well ordering all the bits from them and posting direct to you!

I reckon you're right there Davie!

I was surprised I can tell you...

Looks like CitroJim has been driving the messaging system too quickly again. He has put a dent into a PM!

Hell Razor5543 wrote: Looks like CitroJim has been driving the messaging system too quickly again. He has put a dent into a PM!

No, just put a dent into all the tasks I had to complete this morning

I made a start on the latest 4HP20 overhaul last evening after a spot of garden work - the weather is too good not to crack on with that - and was pleased to note the presence of very little swarf on the valve cover collection magnets... I've seen these looking like little metal hedgehogs in the past...

The remaining ATF I drained out looked a little dark but In hope that's just a result of the failing Torque Converter and not a gearbox problem. Certainly the old ATF did not smell burned..

Should know more this evening when I hope to have the 'box split so I can get the first glimpse of the internals...
Top

Bit late to the party, but thinking back to the brief vintage audio discussion on the last page, I finally managed to mountaineer my way to the back of the room to actually get to my stereo today. Apologies for the horrible photos, it's quite dark back there and taking photographs of shiny things is a pain. Especially the buttons on the turntable which are virtually retroreflective! 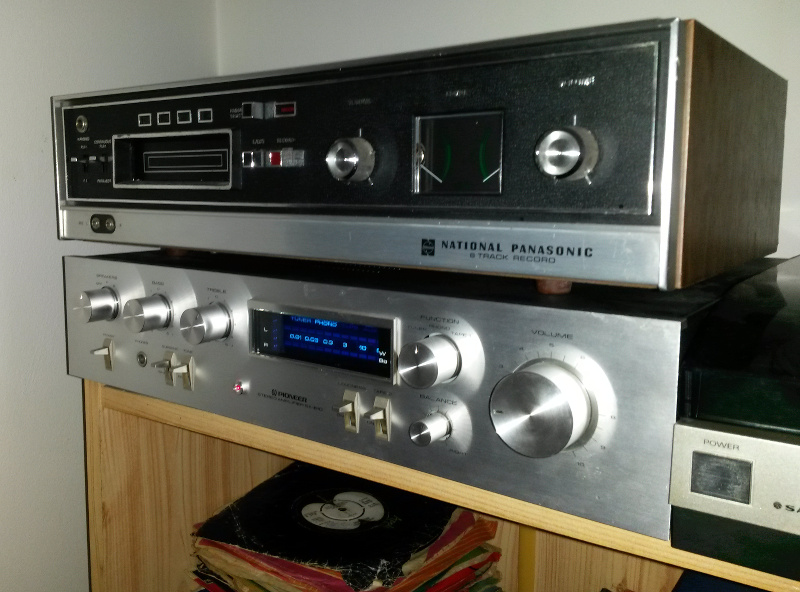 Amp is a Pioneer SA-610 (£20 from Cash Converters years back) which is more than capable of making the windows rattle, and that's an old enough to still be badged as National Panasonic 8-track recorder sitting on top of it. Hasn't seen much use lately as I haven't found the box with the cartridges in since the move here yet! They will turn up eventually I'm sure. 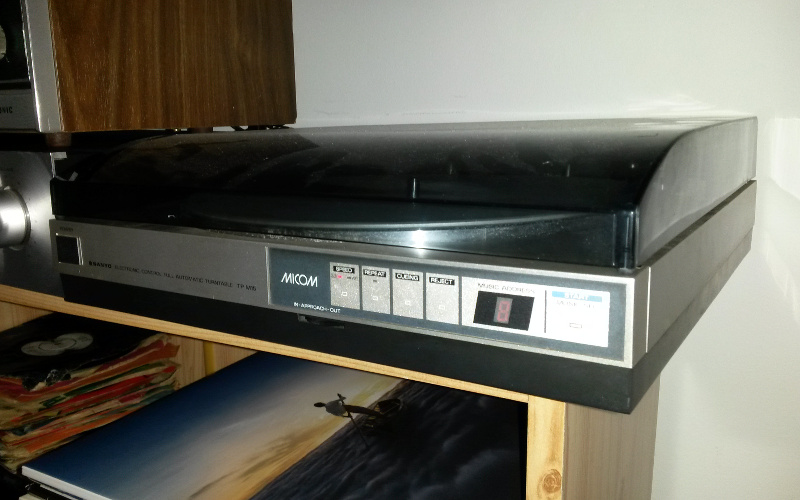 Deck is a Sanyo TP-M15 and sounds easily as good as any other that I've heard to my ears. I do have the whole matching separates system that goes with that as well (tuner, tape deck, CD player and amp), and would like to reunite it at some point when I have the space. ...Oh, and when I fix the scratchy volume pot on the amp.

PS. Yes, I know vinyl shouldn't be stored like that - there are about three sitting horizontally because I've run out of space, that will be addressed shortly. Don't worry about the singles...they're all *very* well used so short of running them over I'm not likely to make them play any worse!

Oh, and this as you can probably see is the Frankensub. Not vintage in any way (well, the power switch is out of a 1979 Volvo 240...so a bit of it is!), is a complete bodge, but coupled with the rest of the system and set up right (getting the gain set right was a royal pain - flat out it's probably running at about 1% of the expected use in the back of a Corsa!) actually does sound fantastic. You don't realise how much it's actually doing - until you switch it off and then realise that it really does add a lot of depth (even to what was already a decent sounding system). Plus it's a great bit of kit for making people go "what on earth is that?" when they see it. 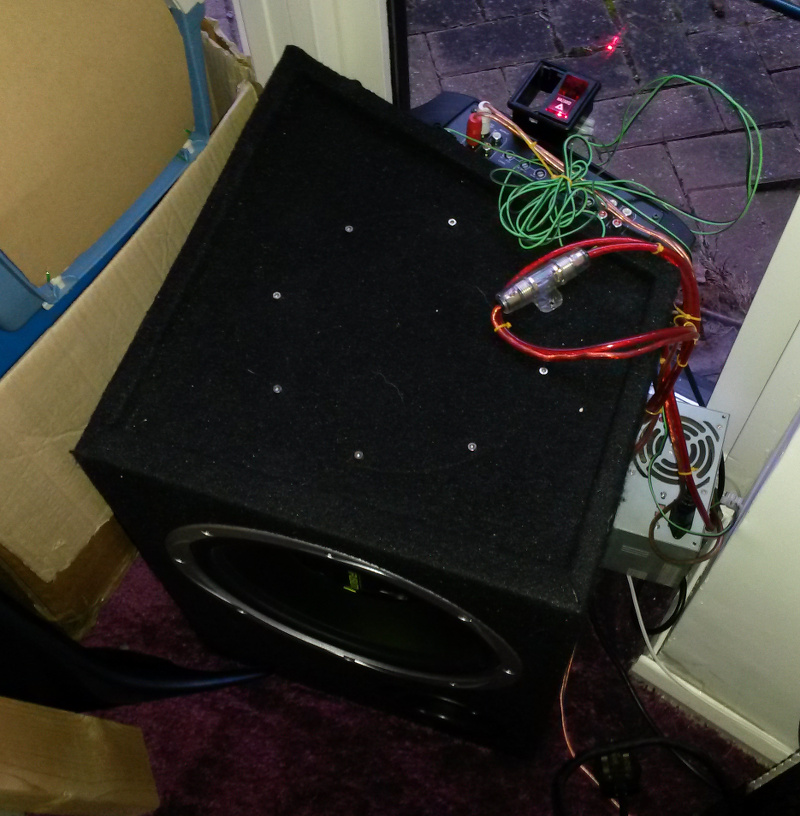 Looking forward to actually unearthing enough of the room so I can use the thing again...
Top

Now they are VERY rare... Do you have an 8-track in any of your cars then?

Been very busy and very enjoyable day today with the 4HP20 Autobox refurb I'm doing for a member of Team WFA... I've got the 'box in bits and the condition of it is excellent. It looks as if it only needs a new filter and a clean-up... All the usual suspects that wear are looking in fine fettle

Davie's Activa will be with me soon for its clutch change... Really looking forward to getting stuck into that one 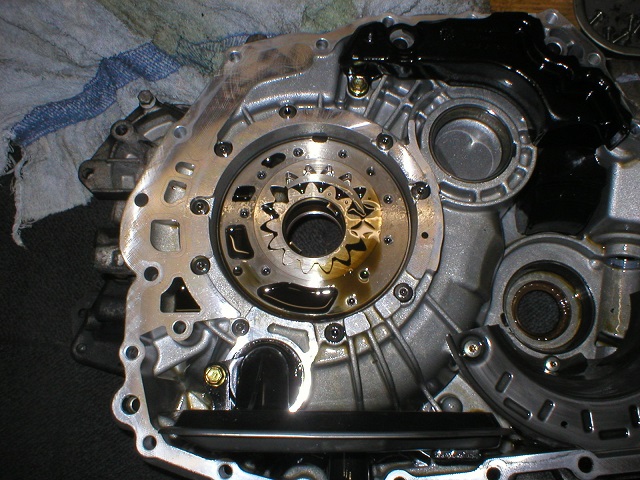 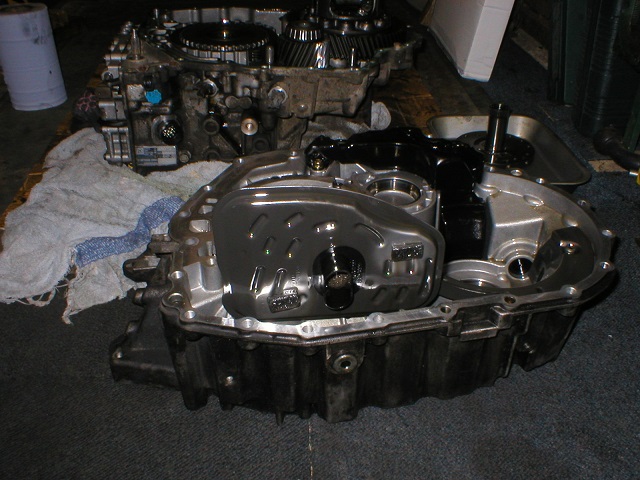 The recorder is the only 8-track bit of kit I own (so far), my other half has designs on an MGB GT somewhere in the not too distant future, if that happens I will have to find a period car player for it then.

Did see one in a Rolls I looked at a few years back (and still can't decide if I made the right choice to walk away from), which apparently did work. Shame the same couldn't be said for half the other electrics though...prices haven't half gone up since then! Even knowing it needed a few bits of work done I'd most likely have been quids in if I sold it now. Was mostly just some paint repairs and dodgy electrics (which I'm sure was an earthing fault)...but taking a gamble on cars where parts are that dear is somewhat terrifying so I didn't. One day.

That box does look nice and clean, should be perfect once you're done with it. Need to pay close attention next time I have the Saab out, half convinced it's started lately to go into second with more of a thump usual on light throttle (not that it's the most refined box at the best of times...it is a 50s design basically), and that worries me...Need to confirm with myself that I didn't just imagine it first though before I worry too much.
Top

Mind you, there is one thing that no man can ever hope to truly understand, and that is how a woman's mind works!

That's what they want you to think......its a double bluff
Top

Definitely part of the warp drive from the Enterprise!
Top

Dare say if I had to, I could work it out. I am blessed (sometimes cursed!) with a mechanical mind.
Top

I don't have a woman of my own, I gave my daughters away, and, well the less said about their mother the better, I have no intention of getting another woman, is by my reconing I don't have to understand them.[emoji48] [emoji23] [emoji23]
Top

My papa has no need of another woman, he has me and Maman. And believe me, we are enough for anyone!!!!!
Top
Messages: 6999