I thought I'd start at the top and work down

I thought AM would be a simple matter of looking at some Aston Martins - it proved not to be the case, there are some out there but to stay in theme I wanted a pre 1974 - in the end I found this although at first glance it seems I have added the number so the link to it is below!!

This is the link
Top

Here is a somehow more satisfactory AM together with an MR and MW:

"Wadworth has been brewing beer in the beautiful market town of Devizes, in Wiltshire, since 1875.
Originally founded by Henry Alfred Wadworth, the business passed to his founding partner John Smith Bartholomew and is now in the fifth generation of ownership by the Bartholomew family, with Toby Bartholomew leading the company as Managing Director."

"6X is the jewel in Wadworth’s crown. Our most popular beer, the one which made us famous, and the beer that has won numerous medals in a variety of awards. It has been in production for nearly 100 years and we still use the original recipe
For many ale drinkers, 6X is the only option, so if you’ve never tried it, don’t wait any longer. Full bodied and distinctive, it’s a strong premium ale with an ABV of 4.1% (4.3% in 500ml bottles and cans).
6X is mid-brown in colour, malty and fruity on the nose with a balancing hoppy note. The delicious malt and fruit character emerge even more intensely on the palate with a long, lingering and malty finish."

You'd think it would be ready by now!!

I was rather hoping to avoid this particular beer as it was responsible for my worst ever week. Back in the 70's my mate (the one now in Spain) and I attended our OU T101 Technology Foundation Course Summer School at Bath university. We drove down on the Saturday morning and arrived in time for lunch in the student bar. Pork pies and 6X was the order of the day. My god it was good, too good as it turned out because we were still in the bar at 5pm with brimming glasses. I honestly have no idea how many went down but we were able to make the Saturday evening supper, washed down with even more.

Sunday morning was our first proper lecture/project and we began with the challenge to design and build a crane which itself weighed no more than 16ozs but which was capable of lifting a 2lb weight while reaching over a standard size corn flake packet!! We approached the challenge with gusto to the point that we had no time for lunch so I settled on a couple of pints of 6X. I'm sure you know where this is going so to cut a long story short by the time we reached Thursday I had consumed no solid food at all and I was in a permanent state of being unable to face food. I'd leave Ken to go to the canteen and wait for him in the bar where he would join me after his meal.

He was getting concerned about my condition and not being able to face the canteen (that is a different story!) so he drove me into town on Thursday evening where he found a fish and chip shop and tempted me back into eating with my favourite nosh, pie and chips. That cured me and I managed to stay off the 6X that evening and only had a hair of the dog pint on Friday lunchtime. By Saturday I was fairly sobered up and able to return home to forget rather than regret my week's activities!

I have run out of research time without finding HR or WV but here is their listings from my book:

I like a bit of randomness, so on doing a Geograph browser select of England then Wiltshire, then Public House, whatever it was it was going to pub of the day in Wiltshire's day in the spotlight.

Not far from the western portal of Box Tunnel lies Real World Studios.

"Real World Studios is a residential recording studio complex founded by Peter Gabriel and situated in the village of Box, Wiltshire, England, near to the city of Bath.
In 1986, following the success of his album So, Peter Gabriel decided to pursue a permanent recording facility. Knowing that he wanted to remain in the same area as the Ashcombe House that he had been renting, and that he wanted the new location to be close to running water, Gabriel looked at several sites, mostly old mills, near Bath. A 13-acre site in the village of Box featured the By Brook and several existing buildings, including Box Mill, a 200-year-old water mill that had been converted to offices in the 1950s. Gabriel purchased the site and its buildings from Spafax in 1987.
Gabriel's vision for the new studio was a unified space where everyone could work together, where musicians aren't separated from the engineer or producer. Additionally, he wanted these creative spaces to have elements of light, air, and water. Working with architectural design firm FCBStudios, the existing buildings were converted and a new building ('The Big Room') was added. The new complex provided both recording studio facilities and residential accommodations.
Notable clients of Real World Studios include A-ha, Stereophonics, Seal, Brian Pern of Thotch, James, Reef, Therapy?, Alicia Keys, Amy Winehouse, Placebo, Van Morrison, Beyoncé, Natalie Duncan, Björk, Black Grape, Coldplay, Mumford & Sons, Jay-Z, Kanye West, Paolo Nutini, Robert Plant, The Vamps, Paloma Faith, Rag'n'Bone Man, Tom Jones, New Order, Kasabian, Kylie Minogue, Laura Marling, Pixies, Sade, Sia, Blue October, Harry Styles, Marillion and Indigo Girls.
Real World Studios has been host to film and TV projects including Quantum of Solace, The Golden Compass, Green Zone and The No. 1 Ladies' Detective Agency."
https://en.wikipedia.org/wiki/Real_World_Studios

I have just realised nobody has identified our Christmas visit location from the beginning of Wiltshire?

Unashamedly borrowed from the visitwiltshire site I found a lot of information in this write up:

Situated beneath the chalk downland, with its abundant flora and fauna, Warminster lies on the edge of the Cranborne Chase and West Wiltshire Downs Area of Outstanding Natural Beauty.

The town derived its name from the Minster Church of St Denys which was built in Saxon times within a loop of the River Were. There is evidence of earlier settlements in the seven hills that surround the town, three of which are Iron Age hill forts, the most notable being Cley Hill to the west of Warminster. Once part of the Longleat estate, it was entrusted to the National Trust by the sixth Marquess of Bath.

The town boasts many historic attractions including Warminster Maltings, Britain’s oldest working maltings, and Dents glove factory. Founded in 1777 the latter has been supplying gloves for royalty since the reign of George III, including Queen Elizabeth II’s coronation gloves. Visits by groups to the Dents museum can be made by private arrangement.

The town park with its tranquil lake is the jewel in Warminster’s crown and is being lovingly restored. The children’s paddling pool is a huge attraction in the summer months and a skatepark, tennis courts and putting green are available all year round.

The park leads to Smallbrook Meadows Nature Reserve which is run by Wiltshire Wildlife Trust and has a thriving population of water voles.

A rich variety of routes to nearby picturesque villages provide plenty of opportunities for cycling and walking activities, as well as sailing at Shearwater Lake.

Warminster is the nearest town to Longleat – home of the UK's first ever Safari Park and one of Britain's most impressive examples of high Elizabethan architecture.

mickthemaverick wrote: ↑
23 May 2022, 14:11
I have just realised nobody has identified our Christmas visit location from the beginning of Wiltshire?

That'll be Salisbury I presume. We stayed in a B&B once over the fields from the Cathedral. Very nice.

I have just realised that time may be running out for Wiltshire but we can't leave it without a mention of 'chalk' horses so here is my favourite of the several to choose from:

A well-known feature of the area is the Westbury White Horse, which overlooks the town from a slope up to Salisbury Plain, in Bratton parish about 1+1⁄2 miles (2.4 km) west of the town. Probably first made in the 18th century, its present form dates from 1778 when it was restored. In the 1950s it was decided that the horse would be more easily maintained if it were set in concrete and painted white.
Top

A familiar sight in the skies of Wiltshire are the Hercules transport aircraft which used to operate out of RAF Lyneham but now have transferred to RAF Brize Norton:

This is a 12 year old photograph of the Lyneham base :

All the information you need is here

My parting shot for Wiltshire, what are the chances of Devon coming out next 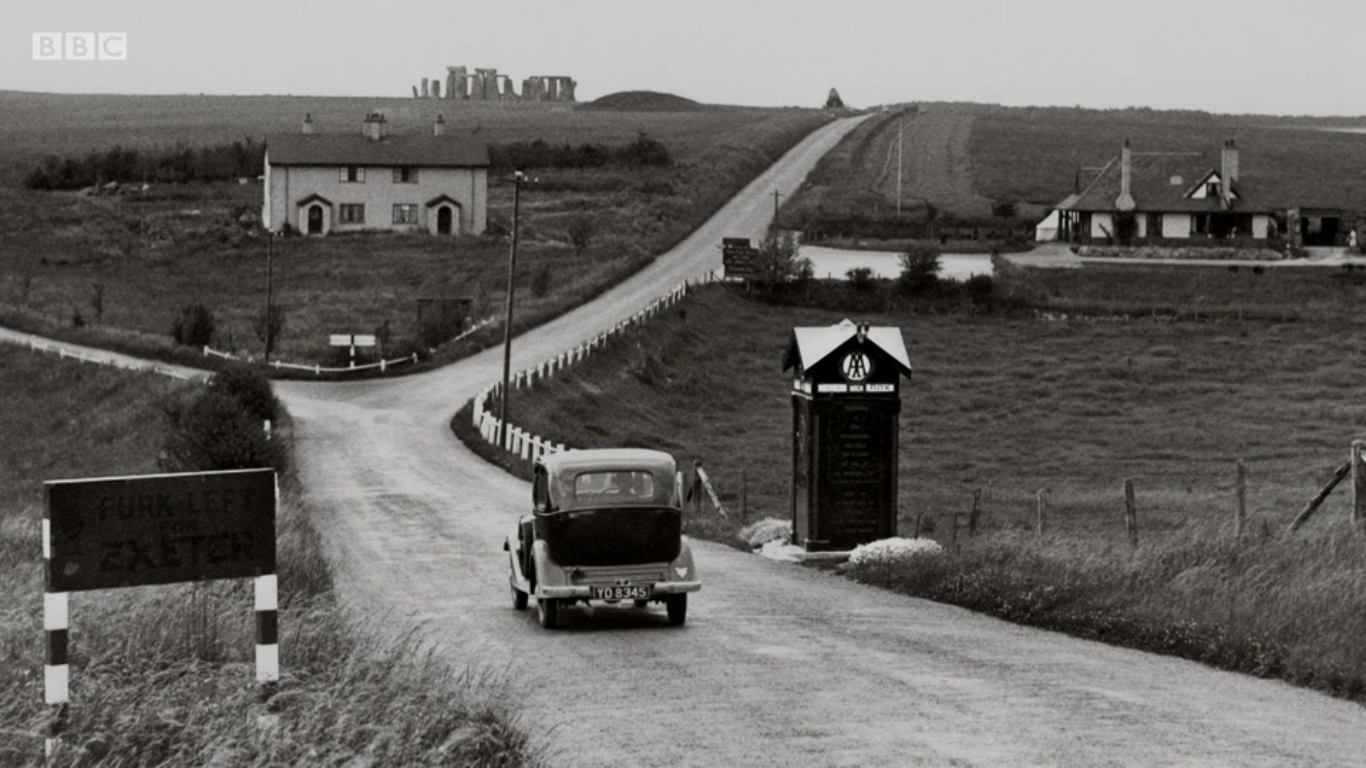 Happy for it to be moved on

mickthemaverick wrote: ↑
23 May 2022, 15:38
A familiar sight in the skies of Wiltshire are the Hercules transport aircraft operating out of RAF Lyneham:

This is a 12 year old photograph of the base :

All the information you need is here

Wiltshire has been well represented and the time has come for a fresh challenge:

Well that is spooky!! I am leaving here in a couple of hours to drive to Bob's in Reading for a day on the Thames tomorrow. So if there is any room left when James has finished I'll get some 'on the day' shots!!