Hope you enjoy a bit of virtual seaside anyway gentlemen. We got rocks and waves as well as sand

Did it again today, but had to go because I needed some gingerbread and coffee at the Stable Yard at Craster Tower

NewcastleFalcon wrote: ↑
29 Aug 2020, 22:30
So the BB micra has its MOT, and no doubt is expecting the traditional treat of an oil and filter change. What £50 in one day....its going to have to wait. ECP can deliver the oil/filter in September plenty soon enough

So back at the end of August BB Micra got its MOT, I eventually did get the stuff from ECP, but put off the annual treat of doing an oil change but seven and a half months later, today was the day.

Straightforward, filter just needed removing by hand with no mechanical aids, drain plug easy enough to undo without jacking up the car, filter tray caught most of the hideous black stuff, transferred from tray to large 25 litre drum via a funnel prior top a tip visit to dispose of the stuff, wiped down the collection tray with an old shirt, shoved that in a plastic bag ready to go to landfill.

Replaced the drain plug and opened the new filter box...yes never opened it all those months ago when it arrived and I find it is the wrong one, not even a cannister....its a filter element. Too late to do anything different, gave the old filter cannister a little swill out with fresh oil and put it back on. Re-filled up using a balti curry sauce jar, due to awkwardness of filling up from a 5 litre container, and the architecture of the Micra's filler does not allow any funnel to be inserted. Yes the jar did the job pretty well.

Didn't get my hands dirty thanks to probably the best pair of working on stuff gloves I have ever bought £1.99 at Tool Station, cloth-y on one side rubbery on the other, had them ages now. The nitrile articles I usually get in the 100 pair box are useless by comparison.

So the BB Micra gets its belated reward of an oil change after passing its MOT. Simple job generating some toxic waste for me to empty into a communal tank of other toxic waste for someone else to deal with. I suspect my contaminated rags will end up in landfill, along with the plastic bag and old oil container, and the black oil, can you really process it again and make something clean out of it...I doubt it.

You certainly can reprocess waste oil Neil, there's a whole industry been doing it forever.

Here's an example from the Yanks.

Here's an example from the Yanks.

Don't think I would shed a tear if Safety-Kleen and their equivalents went out of business because they didn't have enough old engine oil to collect and recycle.

For now I continue to churn it out with BB Micra, and need someone like Safety-Kleen to deal with it, although it will be some time before it gets its next oil change.

Only one car for this job. BB Micra earning its corn.

We have been looking for some to fix my son's fence, blew down last October and has been propped up with a pair of my ladders since.
B&Q had everything in in November but dithering was the order of the day.
Went last week and loads of mismatched parts, same with B&M.
The only posts that fit the spikes were huge - 12' and £16 each.

I was thinking of Quay Timber but it is a bit of a trudge to get there.
Top

Being a bit of a skinflint, when I investigated fences and how much wood you need for them, I thought that's more than I am willing to pay by some margin, but probably the going rate.

I found of the conventional supplies Maxwells DIY you can buy online their standard size posts, and 1.8m boards, and they are cheaper than the likes of Wickes and much cheaper than builders merchants who I expect offer decent discounts to people with trade accounts, but their stuff tends to be expensive to the non trade. Homebase sell CLS timber for considerably less than MKM.

I was really chuffed with my Sawmill purchase today. May have to "put my name down" for the 150 x 16 X 6ft boards
as they are in great demand, but the price makes the job doable at a price I am more than happy with.

I'd advise anyone putting in wooden fenceposts to avoid concreting them in if at all possible. The concrete boot hastens the rotting of the post. I'd normally just thoroughly ram up the soil around the post with the addition of some hardcore / rocks and stones. Quite often the post is having to be replaced as it's rotted out at the base due to being concreted in - so the old concrete footings can be broken up and used as infill

bobins wrote: ↑
21 Apr 2021, 20:43
I'd advise anyone putting in wooden fenceposts to avoid concreting them in if at all possible.

Interesting I'll have a ponder on that. They probably don't concrete telegraph poles in and as some round here prove they have been in since 1954

Then again they do do heavy duty preservation on them. 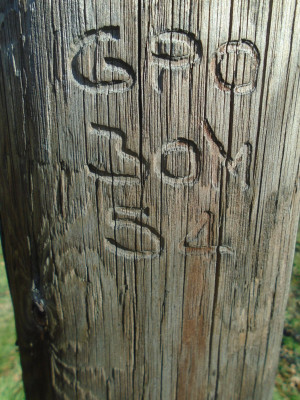 My dad (professional gardner/fencer for 20 years) always used to stand wooden posts in a bath of preservative (mixture of linseed and creosote I believe) overnight before inserting them in post spade dug holes with a bitumen packing. Our garden fence went up in 1961 and looked just as good when I moved out in 1996, no rot at all!!

I recall visiting an old mine years ago, it was rich in copper deposits and very very wet. Any aluminium ladders used in there hardly lasted any time, whereas the old wooden ladders went on for years - the copper in the water did a fantastic job of preserving the wood.

Cuprinol:
"The story of Cuprinol goes back to Denmark in 1911 when O.P. Christianseen devised a process by which a copper compound was incorporated in spirit solvents to develop a product to preserve fishing nets. Its value as a wood preserver was also recognised early on, aided it is said by observations of timbers under a copper roof which were apparently sound after 200 years. This “Copper in Oil” – or it’s Latin equivalent “Cuprum in Ol” is the origin of the Cuprinol name. The copper compound gave the product a distinctive green colour, and this first product still survives today as “Cuprinol Wood Preserver Green”"
http://bjn-paint-reunion.co.uk/cuprinol.htm
Top

Thanks for the info chaps, I'll see what I have lying around. I've got all that old engine oil from the micra for a start I'm sure that is toxic enough to kill off rot fungus

I remember going to the wood yard with my Mother, and a barrel on my old pushchair, on an errand for Dad. "I need 5 gallons of creosote please" she asked the chap. " Which type?" he enquired. "The smelly one" She said!!

We are just doing a bodge - the posts set in concrete have indeed rotted through at the base.
Just going to sink three spikes in and then put 2M posts up.
He aims on moving in about three years so is not going to chuck money at it, although he did consider a complete new fence.

I looked at Screwfix prices and needed a stiff drink to calm my nerves.

Never considered Maxwells - there is one a couple of miles away but we only go there if we are short of time and for small things only as they are generally much more expensive, as are Jewsons.

I would go to Nordstroms but it is at least ten years since I last was there.
Top

myglaren wrote: ↑
21 Apr 2021, 23:13
We are just doing a bodge - the posts set in concrete have indeed rotted through at the base.
Just going to sink three spikes in and then put 2M posts up.
He aims on moving in about three years so is not going to chuck money at it, although he did consider a complete new fence.

Never considered Maxwells - there is one a couple of miles away but we only go there if we are short of time and for small things only as they are generally much more expensive, as are Jewsons.