Thanks for looking Malcolm. I've sent an email to Franzose asking if they know any different and await a reply. It will be interesting to see the complete valve from Rob. With regard to the seal/protector cap as sent, there is clean metal around the ferrule, and it is positively 1mm smaller in size. I'd be more accurate, but I have only a crude vernier gauge to use, though it read a clear 1mm difference of I/D. Comparing the O/D of the plunger is where my verniers crudity lets me down - and of course the fact that it will not fit over the plunger!

The drop box image 002 the two valve protectors can be seen side by side. The new on the right. The one on the left shows more metal as I had tried to pare the rubber away in an attempt to see if it would pop out. It won't.

In image 007 there can be seen in the triangle the number 5. Might this refer to the ferrule size? And in which case are there other sizes? Hmmm.

Can someone explain to me (in plain English) why the need/desire/want to describe certain parts by their native names, rather than their English terms? I can see the point if I was sooking on Gauloise whilst shrugging or in talking completely in French...

Anyway, back to the brake control valve damper. It seems from my butchers at the parts book that part 95 640 067 is for a GS/A from June 1981. Prior to that is a different number and I've a feeling they didn't even exist pre-1975. According to this thread http://www.gs-gsa.org/forum/forum_read. ... read=37618" onclick="window.open(this.href);return false; , something late DS might fit the bill. 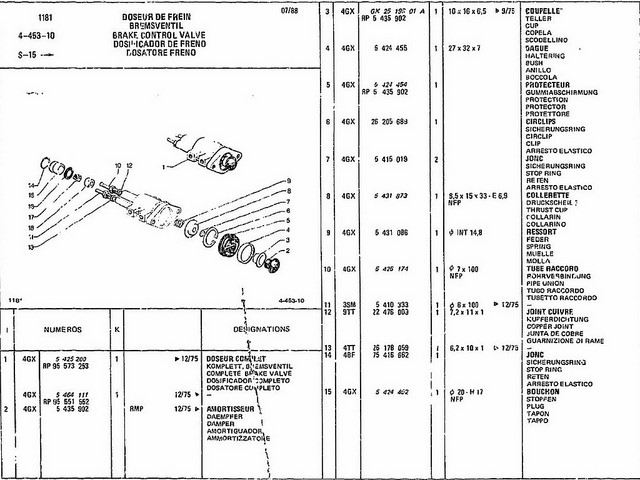 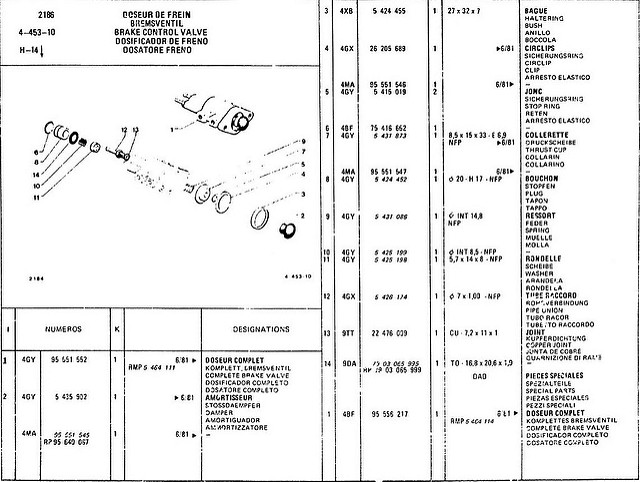 The other things the parts pages point to is that 3 pieces seem to have become an all-in-one single part.
Top

Late DS pages for comparison of numbers, some are the same: 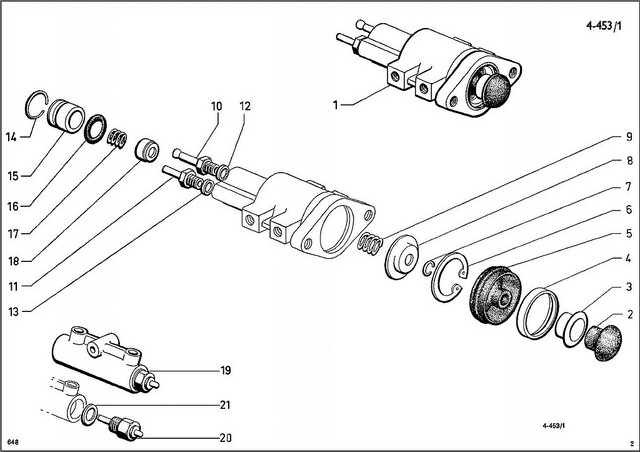 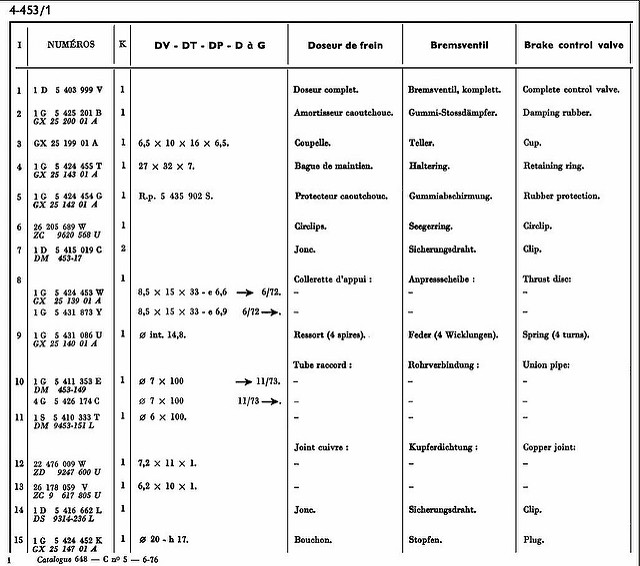 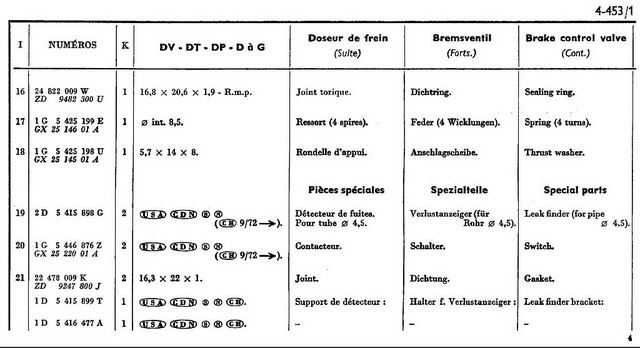 Thanks for posting the diagrams Mac (is it Mac?).

Why French? Because sometimes there is no straight translation into English. Doseur translates as doser - (which means bu**er all to me save someone who is dropping off to sleep), but it is called doseur by some who work on Citroens, so doseur it has become. Brake control valve would do I guess, and the protector cap also acts as a seal, keeping the LHM from leaking to bulkhead or floor mat on its way back to the reservoir.

The French forum was interesting, and translated it confirms that the protector cap as fitted to GSA, BX and others (XM, Xantia), does not fit the GS. Seems it got changed when the GSA came out, and there is no reference (part) number for the GS item. But someone in the South of France has discovered someone else who was able to re-manufacture some - or maybe one - that much is unclear.

Interestingly, post No. 38170 on that forum suggests that a late DS item will fit the GS.

PS: You will have to click on "translating" for the translated text to appear.

This part:
https://translate.google.com/translate? ... t=&act=url" onclick="window.open(this.href);return false;
- is for which car? I would guess the GSA/BX etc. as it has already been suggested, and found by yours truly not to fit the GS. Without the dimensions of the ferrule beneath the hat - we do not know. Other than that - it's the correct appearance.

The DS drawings show several components that are not on the GS - particularly the rubber parts. The DS (from those drawings) show a two part rubber button.

Delving into the rubber section itself shows that the ferrule is not tubular, but rather more like a dome shaped washer. This lends the idea that it might be possible using a rotary file to open out the diameter of the ferrule to fit. But I have a complete valve on the way (I think). If not - watch this space . . . .
Last edited by Stonehopper on 19 May 2015, 20:58, edited 1 time in total.
Top

well i never did

It's Mac, Richard, Rich, Richie, Rik or "hey you" depending on who you are

Sorry about the mini-rant. If I was still on my soapbox I'd be calling a brake master cylinder...points noted anyway.

The images I've posted are hosted on Flickr. If the images are clicked they take you to the relevant Flickr page, where they can be view in original size and even saved in original size. They've been borrowed from parts book PDF. The changeover date is listed in the 5th column.

Looking at the books, your measurements with the very-nears along with Malcolms input, I think it's safe to say that the difference between these two parts is a 5mm (5.5?mm) hole and 6.5mm hole in the cup.

Some Swedish discussion about it here: http://citroenakuten.com/viewtopic.php?f=41&t=39553" onclick="window.open(this.href);return false;

It's been interesting research for the day, details of which I'll stash in the back on mind should it come up again.

Yes - others have been here before!

This translated section from the Swedish forum tells of what I might end up doing:

"Now we need to determine if you need to modify the new bellows. Measure as accurate as possible up the outer part of the valve plunger. On my GS-73 was 6.3mm, which is larger than 5mm (or if it was 5.5mm) that later cars, which are said to be all from the CX onwards (including GSA). If you can get something just over 6mm, then milling the hole in the ring in the protective bellows to 6.5mm (same inner diameter as originalmärlan have). Also make sure that the rubber in the direction behind the ring also has the same dimensions (mat with a 6.5 mm drill). Wash thoroughly clean the bellows from metal shavings and rubber flakes. "

This chap has done the job without removing the brake control valve from the car. Saves a lot of faff with removing pipes and bleeding the system after rebuild, but introduces a lot of work messing about with pedals. Might be better though. Either way there's the exciting grovelling in awkward places to be done

At least we have expanded the knowledge base (mine at least!)

Thanks for the research Richard.
Top

Not waiting for replies anymore (from suppliers that is). Went ahead and rotary filed the I/D to approx 6.5mm, then reamed the rubber behind to match, and it's a perfect fit.

Thanks to Richard for the Swedish link which prompted me to bite the bullet.

Top man. No point in delaying things. Might as well strike while the iron is hot!
Top

All back together, but need some help.

In removing the brake control valve air has entered the system and logically it needs bleeding out. But lets backtrack -

I was in a bit of a quandary about which way round the brake valve should go back in. Obviously I made a note of how it came out, and it has gone back in the same way. But looking at the drawings in the various manuals, they all show the pipes fitted to the opposite pair of unions. There are two unions on one side that sit slightly further away from the bulkhead and these (according to the books) are high pressure in, and suspension. The opposite two closer to the bulkhead are to brakes fr. & rear.

I 99% sure put the valve back in the way it came out, with the hole inside the unit which feeds the return at the bottom of the body (it's behind the circlip plate and spring). None of the manuals show these re-assembly details, and now I'm doubting myself.

Did I cock up?

Because she won't rise up with the engine running at all. Or is this due to me being a dimwit and not as yet bled the brakes?

Supping coffee to calm down.
Top

the dosure valve removal and refitting should not stop the suspension rising, as the high pressure feed into it is straight off the safety valve, this feed is fed with pressure as soon as the pump is pumping, and before system pressure is reached
( for safety reasons so the brakes are the first to be fed pressure and the last to loose it )

then the suspension will not pressurise up till the safety valve gets full system pressure built up,

the drawings in OE citroen manuals ( parts and mechanical ) are quite often for LHD cars so can look like a reversed/inverted image,

if you have an English OE repair manual it will have a drawing of the dosure with the ports indicated,

if you have a drawing showing which ports are for what in/outs, the front two should be obvious as you can follow the main feed in from the safety valve, and the one feeding the front caliper back to the dosure,
the rears ( rear suspension return and rear brake feed ) are not quite as easy to trace back to were they terminate at the rear end,
i spoz with the inspection plate in the boot floor removed you could open the bleed valve/nipple at the brake feed 4 way union and attach a length of tube into a container , then blow compressed air from each of the two pipes at the dosure your not sure about,

silly question but did you have the bleed valve on the regulator open ??????
Top

No such thing as a silly question! But yes - the bleed valve was open upon starting the engine and remained open until I realised it was open! And then I closed it.

PS : The safety valve - the later cars had these as is stated in one manual, but the '75 GS perhaps not? Hence the need to bleed brakes with the pressure relief valve cracked open? Or am I getting that wrong.

PPS; Just bled the front brakes - no change. Getting at the rear ones next.
When the engines running, if I feel the front suspension spheres I can feel them throbbing.
After shutting off, the become loose quite quickly. (All with the main bleed valve closed).

OK done the rear ones, and when the pedal was pressed the arms moved down some.

I am coming round to the inevitable fact that I have put the brake valve back the wrong way up.

I'll work on it more tomorrow. Had enough for now.
Top

im sure all!! GS/A have a safety valve,

hope they are of use if you aint already got these

you have fitted the dosur with the rubber protector towards the pedal???

Thanks Malcolm, I do have that book along with its companion 008102, and a Hyena's, and a 'Databooks'.

I'll turn that unit over tomorrow. That way it will match what is shown. It's all that's left. I'll be gobsmacked and relieved if that's what it is.

Did I say: - "there's no such thing as a silly question?"