Looks great Ben. Hope you and yours will be very happy there.
Top

In some other news have been asked if we would like Cay's step dad's uncle's C5 as he bought a lexus, so doesn't use it. It's a Mk2 V6 automatic (I believe) exclusive, has done I think only about 60K kilometres too. And he was asking 25,000kr for it (about £1850). So the engine and gearbox have hardly been broken in

I'm tempted, as I've wanted a 2nd car for quite some time so I can feel more comfortable working on them. Will probably be borrowing it this week for the towing duties, so will be able to see the mileage etc.
Top

Thanks Jim and Steve

It's quieter than mine, and acceleration seems quicker. But by god do the V6's live up to the "Pulls like a train" comments I've seen. Driving with an Empty (large) trailer does not feel any different to driving without one at all, and with it full (with a sofa, TV, chairs and lots of other heavy stuff in it), the main difference was it used more fuel!

Suffice to say I have fallen in love with another Citroen, and we have asked Cay's mum if she can ask the guy if it's OK that we pay for it in instalments, over a few years or so. (He isn't strapped for cash, so hopefully he says yes

Hopefully the C5 electrics will be something simple and you can get on with enjoying the house.

It couldn't be something as simple as salt gotten into the back of the socket on the car and shorting out the connections could it? We had it on a trailer once when we were down south in winter. The AA man didn't fancy going under the trailer to fix it so donated a lighting board to the cause lol.

Thanks. It seems I did a boo-boo earlier today with the neighbours over here. They were standing basically at their boundary between us and them. I thought the woman was there having a cigarette or something. But apparently it's the Swedish way of essentially offering to introduce themselves. Rather than doing the British thing of knocking on the door, or saying hello. I was working on the car at the time, and they were essentially the house length and then some away so I wasn't sure.
Probably branded a grumpy git now lol!

On the electrics front, it could be, I'm really not sure at the moment, Individually they all seem to work as they're supposed to with the multimeter. one thing that I've thought about trying is getting a test light and hooking it up to either the left indicator or the brake lights, and see if indicating left unlocks starts unlocking and locking the gear lever.

Tomorrow morning I'll probably try checking against the Mk2's socket to see if I can spot anything different.
Top

Was way too busy today (plus it was pissing it down), to check out the Mk2's tow bar electrics and that's gone back now to it's current rightful owner.

It does make me wonder though about whether there are possibly things wrong with my car, the ride is noticeably smoother on the mk2, which makes me wonder again whether mine needs new spheres, it's still smoother than most other rides, but not as smooth as I think it probably should be (this is the first time I've had a similar car to compare to).

The Mk2 accelerates like a bat out of hell, I thought mine was quick, but mine is noticeable slower at picking up the pace than the mk2. This could be down to improvements made to the ES9A engine and the AM6 gearbox, most likely a better TC in the AM6 I would imagine.
Top

Well today marked the first time I've ever had to take a car for a re-test from a fail either here or in the UK. I thought at the price they would re-test most things (it's over half the cost of the normal test), but nope, they only do the bits it failed on. One of the side lights and of course the uneven rear brakes. She of course - passed.

Decided to also take the unused bits back to Citroen, which basically got me the money back for the re-test. They could have been handy to keep around if I did anything further on the rear brakes, but I think that'll be unlikely for a while.

Still got to see what I can do about the trailer socket, according to SWMBO, the neighbours have said they can let us borrow their trailer to take the hedge trimmings down to the tip. So will get to see if it's all trailers the car has a trouble with.

And it's the time of year where I really should do the general service on the car. Last year I did it on the upcoming bank holiday, but I'm working overtime that day.

It seems I've found a decent mechanic just round the corner, he fixed the rear brakes at a very reasonable price. And since I now have a torque wrench I know what undoing properly torqued wheel nuts should feel like, and it seems like he's the first person I've come across who has got them pretty close to properly torqued.
Whereas most places that have had the tyres off (old citroen indy, and the place I used to get the tyres done) would definitely over-torque them. The wife took a picture of our daughter standing (and sometimes jumping) on the wheel brace to try to shift it (before all the work on the brakes began, so was from when we had new rubber put on these tyres): 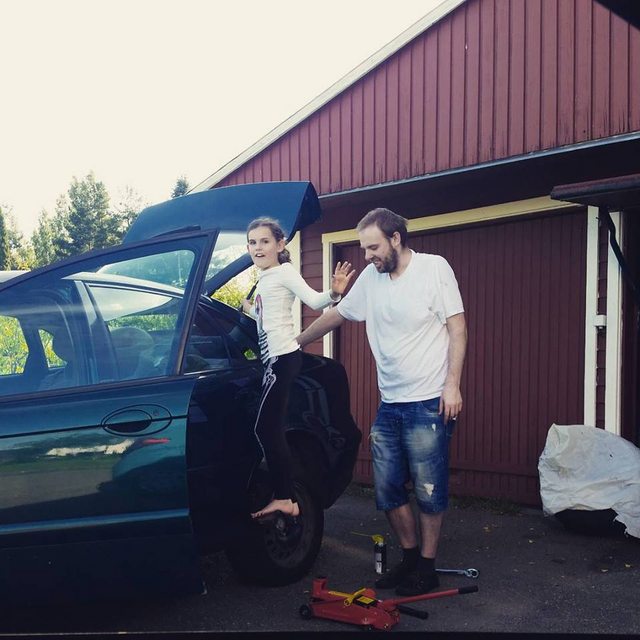 It could almost withstand my weight!. I've found out that the mechanic is also listed as a fitter for the place where I normally buy the tyres from, so that makes it nice and easy.

Side note - daughter does seem somewhat interested in helping me out with things on the car, so hopefully she'll learn a few bits and bobs for when she drives herself in 7 or so years!
Top

It is always a good bonus to find a trusted mechanic on the doorstep, I have to travel to Milton Keynes for mine

Try cleaning all the wheel nuts and the faces on the wheel (go with care on alloys), the fitting/removal will improve a lot
Top

lol they're actually Vans so closer to plimsolls really (though if I keep getting holes in them and the holes get bigger I'm sure they'll turn into Sandals), not sure that makes it any better though?

Did actually give the rear steel rims a brush down with the wire brush the other evening, just to get rid of some of the build up on them. definitely wouldn't do that with the alloy ones though. Hopefully if it's just me and this mechanic removing and refitting the tyres on the car I shouldn't have too much trouble in future

My Breaker+Cheater bar got another use today getting off the front hub nuts.

Really can't believe some places doing them up so tight, I never would have been able to get the front tyres off had I needed to put the spare on when out and about. The wheels were also very tight fitting onto the hub. Not sure if that's standard and I'm just used to the rear ones being rather easy to get on and off the hub. But felt like I had to almost be hugging the wheels to pull them off the hub.

Also as per the other thread, bought some Brake caliper paint to paint the pipe going into the caliper.

My super-wrench type tool that I bought for the sheared caliper bolt got a use yesterday in getting the spray head thing we have off the kitchen tap as it was leaking ( this thing ), and replaced with a new one.

Did try using the impact driver on a stuck bolt, but was just wrecking the head of the screw. Might need to get some vampliers or something for that screw, if I need to get it off in future.

Ordered 10 M16 Dowty Seals too off ebay, which will hopefully arrive this week Need to start getting organised in the garage with tools etc. At the moment there's tools spread out the garage and the house, so not so easy to find them.
Top

I still need to round all my tools up...Been here a year and a bit now and stuff is still spread out all over the place! ...Including some stuff still at my old place 500 odd miles away, just to add to the fun.

One day hopefully I'll have time to actually get things organised...
Top

Ben82 wrote:My Breaker+Cheater bar got another use today getting off the front hub nuts.

Really can't believe some places doing them up so tight, I never would have been able to get the front tyres off had I needed to put the spare on when out and about.

Not a problem unique to the UK then?

I once had some done up so tightly the locking key broke trying to loosen them.

I didn't half give the tyre place a good talking to and demands they rectify the situation...

They did but only after their mechanic sheepishly asked my advice on how they should attempt the job!!!
Top

Well, recently I decided to replace the locking bolts on my C5 with normal wheel bolts. The first 3 were a bit tight, but came off. However, number 4 had been done up by King Kongs' big idiot brother, and I broke the key trying to undo it. As I only got the C5 at the end of June, I couldn't take it back to the garage who did it, as I don't know who they were. The local scrappy did it for me, but it took them 45 minutes (and cost me £20, but I think that was fair enough). All the bolts are now 90NM tight, with copper slip grease applied.
Top
Messages: 132