I recently bought 17" TSW Volcano rims for my Activa. They're used, but in ok condition. They're surprisingly light weight, only 17.5kg with 215/45 tyres. Will post pictures once it's time to put summer tyres on again in a few months... I'd like to put some sticky trackday rubber on them (such as the R-S2 I've been using), but it may be that I won't be doing much track driving next summer... not with the Activa anyway, 'cause we bought an old 4 door civic sedan with couple of friends, and we will be racing it in a sort of low cost endurance racing series.

I've had an Odyssey PC680 17Ah battery installed for couple of months now, and it has had no trouble firing up the V6, except when it gets a bit cold... last week I had to leave my car outside for one night when it was -22C, and in the morning the battery was able to turn the engine maybe half a revolution.

At home I have a warm garage, so I guess I will need another battery for overnight trips in the winter. 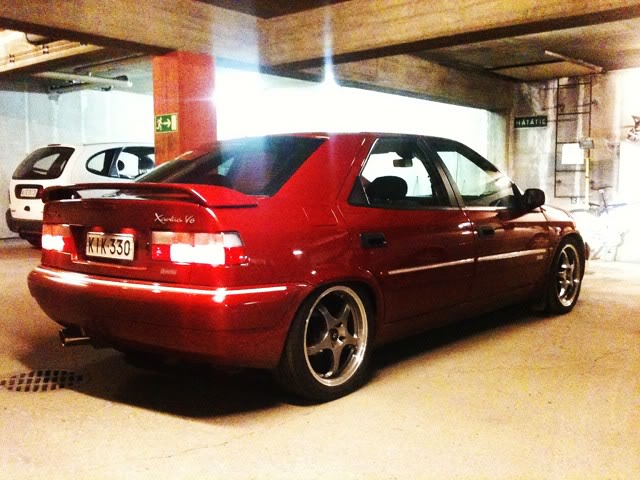 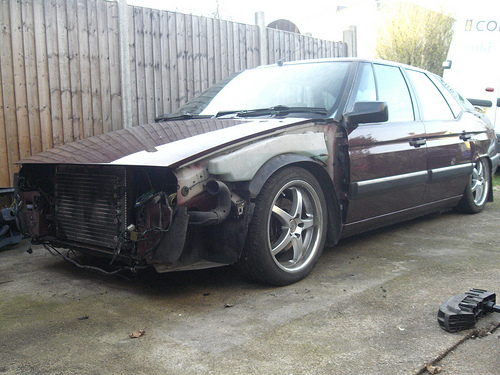 Is the Xm yours? cant be many mk1 XM V6's about now

Mine are 215/45/17 aswell, your Activa does look lovely there on those wheels, super clean too in a nice colour

What a superb looking Activa!

Those are quite some headlamp washers on that XM!
Top

Added couple of track videos to youtube from last summer...

The rear activa ram of my precious V6 came loose a few days ago... nut from the upper end had disappeared, and the result was that it felt like a 2CV going in to a corner

Luckily I had a spare ram that I bought for a reasonable 250€ about two years ago... she's at my trusted Citroën garage right now getting sorted.

As I mentioned earlier I've started racing in an endurance series here in Finland. We took part in five six hour races this summer. First two races we ran a 4-door civic 1.6 sohc, and after the honda's gearbox gave up we've bought a 4-door sierra 2.0 dohc... it looks more like a destruction derby car, but we've managed to hit a podium finish with it in our class

Now we're building a new car for the upper (saloon) class with hopefully >200hp and under 1100kg. Should be competetive, and fun

As a result of this new hobby it's become quite clear that I don't really need a track day capable car as a daily driver anymore. After driving a race car on a track, it might be nicer to drive home in something more comfort oriented... dunno yet if it's going to be XM or XJR Jag from the same era or something in-between, but it'll probably lead to selling the Activa at some point...
Top

Couple of pictures of the V6 as a farewell... 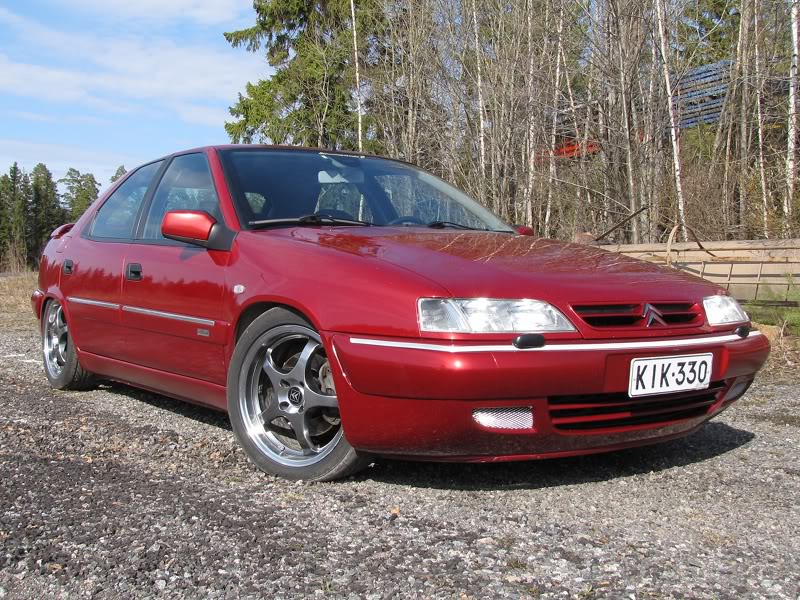 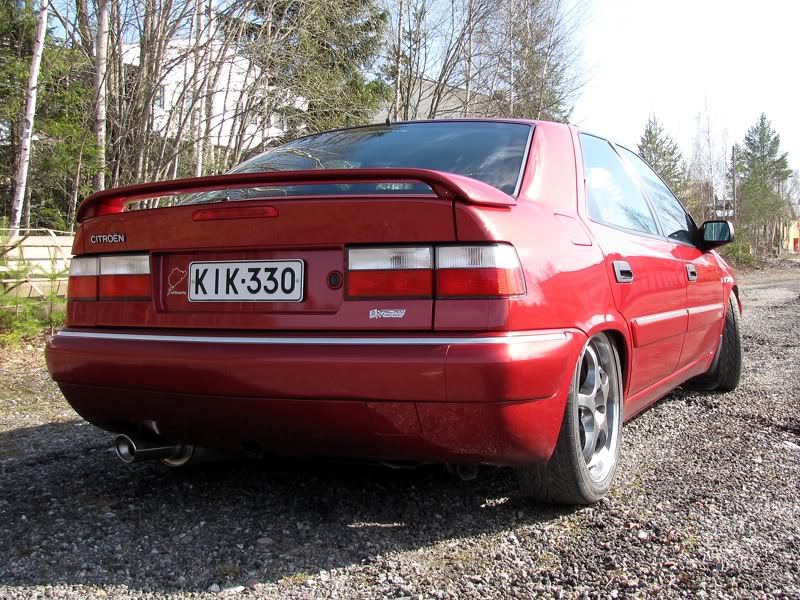 I sold it a week ago to another Activa owner (and he's now selling his X1 TCT...). I must say it wasn't easy to watch it drive away, but atleast I know it has a good new home

That's one nice looking Activa . Will you return to the Citroen fold one day ?

Koukku wrote:I think so, yes, but most likely in the form of a 2CV or an Ami 8

Just a slight change then

I drove the XJR for a year before realizing that a 2 ton supercharged V8 with a slushbox drinks too much gasoline... but it was faster than an E36 M3 at the track

After selling the Jag I bought a Xantia HDi estate as a temporary means of transport while looking for the next nice thing, which I found about a month later; '06 Mini Cooper S JCW. I promptly sold the Xantia as I had no use for it at the time. The Mini has seen quite a lot of track oriented mods during the last three years, and the added power was probably the reason for the head gasket to give... so I decided that I need a sensible daily driver while I work on the Mini, but bought a V6 Activa instead.

It hasn't seen much love, but drives like a V6 Activa should with all the right noises. 190.000km on the clock, black leather interior and a sunroof, and defunct a/c. And smelled like something has died in it... a lot of dog hair everywhere so I'm guessing a deceased canine. Surprisingly little rust on it. The pic is from the day I bought it (two days ago), filling up the tank before driving 250km back home. 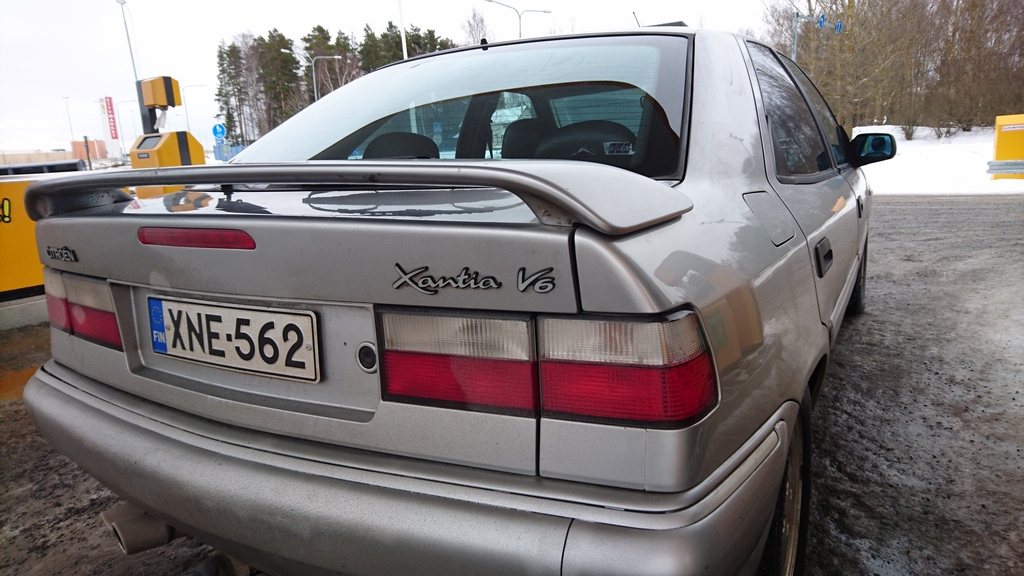