Do you remember the special tool you could get for setting them? it was made by Gunsons and called a Click Adjust.

I've often looked at buying a Gunsons 'Click Adjust' but whenever I've had a car with worn rockers I've simply run the engine with the rocker cover removed and then pushed an old feeler gauge into each rocker in order to find the worn one (tapping stops when you have found a worn one) then slowly adjusted it until it quietened down, mind you that wouldn't be an easy option on a DS EFi due to hassle of refitting the manifold. Interestingly enough IIRC on the old Vauxhall Chevette 1256cc engine the rockers were specified to be adjusted in this way. A couple of thing's is for sure about that method is that its rather messy as engine oil is flicked everywhere and it plays havoc with a set of feeler gauges

I guess they're the special XAS asymmetric jobs...

That is what was originally fitted but Michelin now only make the XAS in 180x15 and with my car being a EFi it was specified with 185x15 tyres so I have to buy the XVS-P which has the same tread but has an extra ridge built into the sidewall to protect the wheel/tyre from kerbing (not that I tend to do that mind!). The cost of each XAS 180x15 is £52 cheaper than a XVS 185x15.

I recall back in the late seventies when I sold new Ford's that a 185 tyre was regarded as being quite wide and was only fitted to Ghia models of Cortina's and Capri's, now it looks more akin to a bicycle tyre

Its been a while so time for a little catching here, my Xantia's are running like clockwork so not much to report there but one thing that's always bother me about the Goddess is the interior, the black leather seats and door cards fitted were from an earlier model of DS and with them being some 40+ years old the leather was showing its age with a few cracks on the top of the rear seat and what with the original leather being so thick that it much have come from a Rhino's rear end, I've always hankered after a replacement set.

Whilst that would appear relatively straightforward, getting hold of the correct seats with the correct method/pattern of stitching is not a simple as you'd imagine, I've spent the last 18 months searching for the right ones and finally at the DS rally I found a complete brand new interior in black leather including door cards/tops, expensive but then you get what you pay for

. Last weekend was spent fitting it, the seats were straightforward but getting the door tops/and cards fitted took a lot longer than I expected, a visit from Jim on Saturday came in handy as fitting the door tops is more of a three/four handed job, not helped by the pressure of having to ensure that the car would be ready in time for a wedding that she was booked in to do yesterday however taking a day off work on Tuesday helped things along a treat.

Yesterday the Goddess came out in all her glory picking up the bride from just round up the road at Stoke Park country Park where Aston Martin were having a corporate do promoting the new four door Aston, also there was the DB5 used in the James Bond film Goldfinger, TBH it looked a little tired particularly the wheels

I did find it rather strange seeing a car that I absolutely drooled over when I was a kid. A quick run up to Marylebone Registry Office then back to Chenies Manor House for the reception, both are stunning venues for weddings, here's a photo of the Goddess outside Chenies Manor. 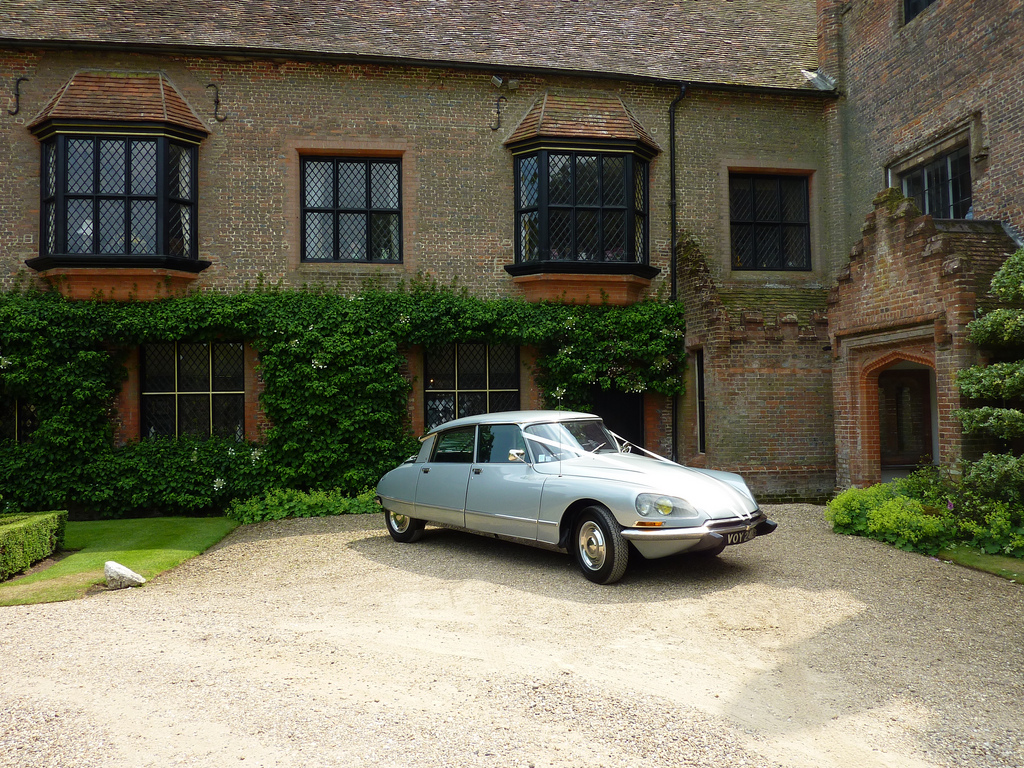 What an absolutely lovely picture Richard

DS and Manor House complement each other perfectly

That's one to frame and hang on the wall...

DS and Manor House complement each other perfectly

That's one to frame and hang on the wall...

Not really, it's all downhill after that

Certainly is a superb picture though, no argument there!
Top

I must agree...a very nice picture!

An idea could be to get it printed onto a large canvas as then you can hang in on the wall. We got a picture of CGOO done for about £30 from eBay - well worth it!

Congrats Richard on the brand new interior...what a find

Needless to say the Goddess looks divine.....truly hats off to your car, a real beauty

Thanks for the comments on the photo

This week has been rather eventful one for me, I'm blaming Jim for the hassle after we had a conversation about our car's and I foolishly stated that my Xantia's are being very reliable

On Tuesday morning whilst I was on my way to work I turned on the A/C and noticed the stop and temperature gauge light flashing indicating a problem with the cooling fan's, I thought no problem I'll sort that out when I get home by cleaning up the contacts on the relays.

However when I returned to the car later it was a very warm day and what with the car being black I opened the doors and windows then went to turn on the engine for the A/C to operate when I heard a horrible rumbling from the fuel tank indicating a problem with the fuel lift pump. I turned off the ignition and tried again but this time the pump didn't run until I thumped the bottom of the tank so I quickly started the car drove it home and replaced the pump with a spare I had in stock. The trouble with that was that I'd only brim filled the tank just 54 miles ago so a gallon or so of diesel was spilt in the process or replacing the pump. the car started OK but the gauge on the replacement pump was knackered so I then I to redo the job again, spilling more diesel in the process

Oh and those cooling fan's, a clean up of the relay contacts got those working again again but for a full account of the shenanigans read this.

Jim, I'm never going to speak to you about my car's again

My car's have been behaving themselves this week, yesterday the Goddess was a gain pressed into service as a wedding car, this time all the way down to Dover to pick up the bride and take her to the reception at Salmestone Grange near Margate, a very nice venue especially for weddings of around forty guests. The request for me to do this wedding came via the previous owner of the Goddess who was giving away the bride, she had fond memories of him taking her out for drives in the car when he owned it and was living in France.

The bride had a colour theme of light blue so the Goddess was adorned with matching ribbons which I thought matched the silver rather well (DS fans note the direction of the headlight). 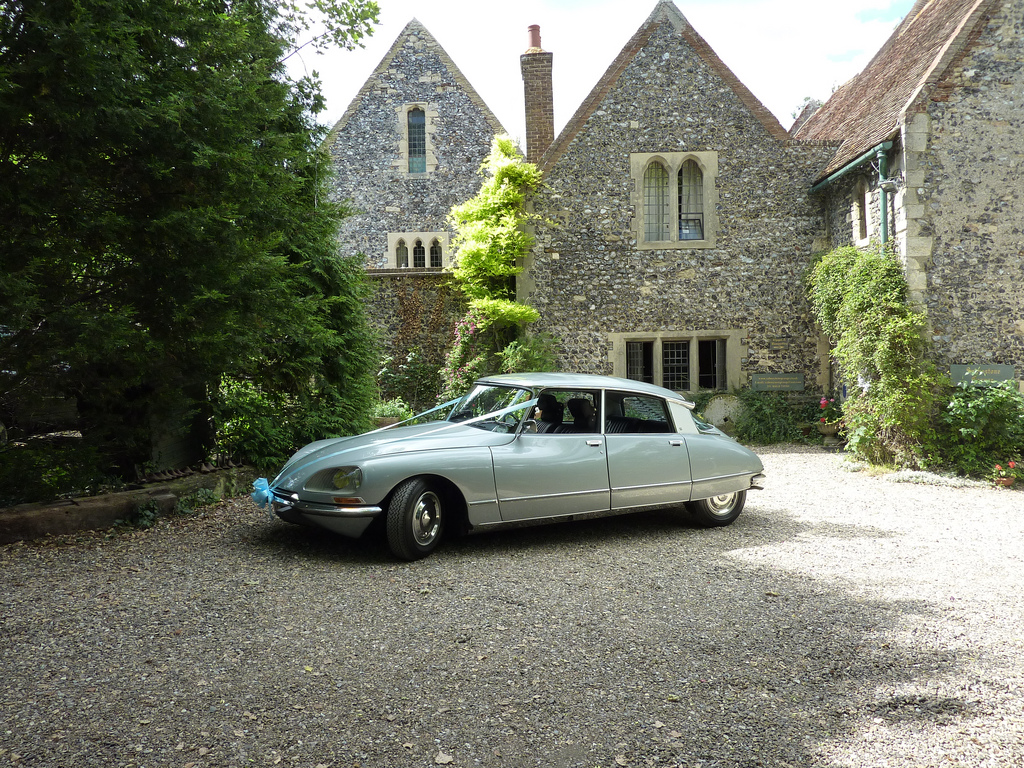 Again a stunning shot of a stunning car....You can understand why the woman had fond memories associated with. 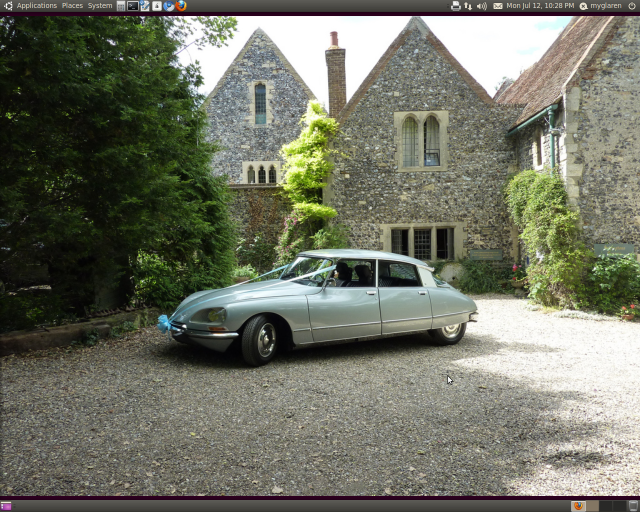 They are connected up and working correctly aren't they

Nice to see that as i read somewhere that people disconnect them due to problems..
Top

Tell you what Richard,

Reckon you have the basis for a future career there

Just shown the picture of your car to a future bride at work... She loves it

Reckon you have the basis for a future career there

With all the cutbacks I am considering my options

CitroJim wrote:Just shown the picture of your car to a future bride at work... She loves it

Tell her I'll do her a good deal

DickieG wrote: Tell her I'll do her a good deal

After spending several fruitless weeks looking around for a fully spec'd C5 estate even worthy of taking a look at I thought I'd widen my options and take a look at a Peugeot 407 SW Executive 2.7 V6 HDi today. Well I was in for a surprise of the unpleasant variety, Peugeot build quality is the poorest I've seen in ages, so much so that by comparison my Xantia estate looked as if it was a BMW. The dash of the Pug was of very poor quality, cheap plastics with sharp edges, the rear seat base was so flimsy it flopped around as if made of cardboard, leather on a door card and tape alongside the rear screen was peeling off, pressing on the cup holder caused it to spring open so clumsily I thought it was broken, the fragile nature of the centre arm rest gave me the impression it would break if anyone dared to rest an elbow on it and the air conditioning wasn't working, all this on a four year old car with 50k miles. After seeing this pile of poo I now know why people complain of the build standard of French cars especially when this one cost £27,000 just four years ago

mind you the engine and gearbox were rather pleasant

I'm off the the CCC National tomorrow, the decision I need to make overnight is whether to go in the Goddess or my HDi estate, decisions decisions.
Top
Messages: 623