Mmmmmm.... I could be tempted.

I do miss it

I do miss it

Make me an offer

It will of had quite a bit of work done since you had it last.
Top

Well, the Activa has now gone to a new home, a very good one in fact, where it will get the attention it deserves and be driven and enjoyed, Chris (Citroenmad) picked it up yesterday and couldnt have been more pleased with it.

Its all change in the household, as not only has the Activa gone, so has the MG!! 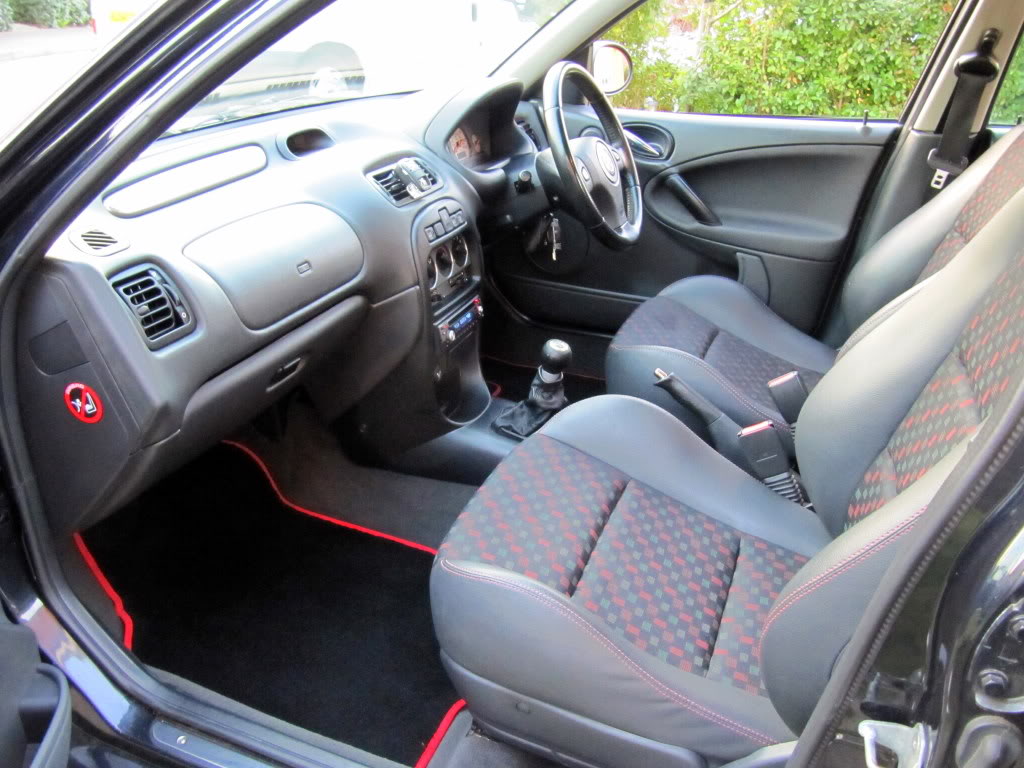 A very smart looking car by all accountants, it wasn't perfect but then what car is? It suffered from a bit of piston slap when cold but when warm, its was perfectly ok, and ran fine with no oil use, the coolant never lost a drop since i did the HG and it drove brilliant, went round corners like a go kart and stopped fine too.

I sold it for £100 more than i paid, except in that time it had 4 new tyres, new brakes, head gasket, full service, 3 oil changes, and some sideskirts.

The mot was very short, but it did have 6 months tax, regardless it was a very cheap car, and i'm probably more sad about it going than the Activa!

Moving house is currently pending, we had some hassle with the place we wanted so dropped out, undecided if we should stay in norfolk where property is £4-500 a month cheaper than surrey, which is where i work, i'm not sure if paying the extra will be worth it for a house that wont be as nice, or in such a good area.

Anyway, i may get along to a show this year even though i am citroenless, i still love the cars, xantia and activa especially, they have been very good to us over the years and given us some enjoyment, you never know, if a mint, low miles late Activa turns up in the future when we have more space and time , it could happen again, but for now, no more...

Your little MG was looking very nice Gareth, the interior looks impressive, very good cars those. No doubt someone else has got a very nice car form you too.

It would be good to see you at a event this year Gareth, you might even see the Activa too.
Top

Had the Mondeo rolling roaded today, made 248 bhp @ 6500rpm and 217lb ft @ 5400, 200lb ft available from 2700rpm in a near enough flat line, when it reaches 4500rpm the torque ramps up a little to its peak and doesnt drop off till nearly 6000rpm! All this means its very driveable and the harder you drive it, the better it goes, obviously! But its in stark contrast to the lazy 4 pot turbo's ive been used to, and the narrow powerband of a TD.
Top

I'm looking at another Activa tonight that is fairly local and still taxed to the end of the month, so should be easier to get home its its a go er!

Its another W reg S2 in green, a colour which is my favourite choice for an Activa, the car needs some work, how much we shall see when i check it out.

There is also the problem of storing it, as have just got yet another car, for Vicky again.

Reason for wanting/having one? Cheap to run and insure, the parts if i need any are easily available and i know a good parts man at the dealership i work for.

Its one family owner since 1998, has invoices going back to 2000, now sitting at 76k, a very straight original and unmolested car, quite difficult to find a Fiesta these days that isnt rotten to bits or chavved up!

It drives like new too, all new suspension components, new tyres, everything its ever needed its been done, so i was more than happy to pay £650 for it, the condition of it is better than the MG ZR we had and its far more comfortable too, the only downside its its a 3 door, but the boot is big enough for a pushchair and shopping and will only be used as a runaround.

Later today i am going to look at a unit that has previously been used for spraying, its about 7 miles from here but close to the airport, so potential for business there although at the moment, i still have trade customers down south, with winter approaching i want to stay closer to home and eventually all my work will be up here, so it could be a useful stepping stone, plus possible car storage

Good luck with the unit Gareth

The festa looks nice, its got the later alloys as well which help it stand a bit taller but look like good rubber on them as well

Solid little motors and dont suffer from too much rust other than door bottoms and sills but cheap motoring being the 1.4

Good luck with the activa hunt, you and your green cars hey, they dont really get you cheaper insurance you know!!

hows the MG?? i've been seeing a white one about near me recently and the back end looks like its collapsed but i guess its just over lowered at the rear or carrying lots of sand bags!
Top

The wheels are from a later Mk5 Zetec, it did have the 4 spoke wheels on but i had a chance of a swop, being the Si it had bigger wheels anyway plus vented brakes over the solids of the 1.25.

The engine is a peach, really smooth and linear, it does suffer the occasional flat spot which i'm trying to narrow down although it could just be a characteristic of the mapping (it has EGR but now disabled)

The unit had gone, a shame as it had a 2 post lift and the guy doesnt have any more at the moment, i'm keep an ear out though and see what turns up.

Moving swiftly on, i've viewed the Activa and maybe i was expecting too much but i wont be bidding now.

Things that put me off, the aftermarket electric sunroof fitted almost halfway back on the roof, was just awful.

At some point, C5 spheres had been fitted to the rear. The manifold gasket wasnt 100%, very slight tick, and evidence it had been fiddled about with, thanks to a cable tie supporting the oil feed onto the turbo inlet pipe

The P bushes needed doing for the MOT, both brake hoses, and the OSF brake line itself although this looked ok to me.

Wheels were heavily corroded, much more than they should be for the age. Drivers side had some bad paintwork and a key scratch on the rear 1/4.

It was a smokers car, no previous history with it.

On the plus side, the rams were good. But i would much rather spend upwards of a £1k getting a very good one than £200 on an abused dog thats had no maintenance carried out recently. The drivers side window didnt work either and the window rubber had been prised off and badly refitted.

The car sat very high in normal position and didnt rise up evenly when started which is sign of neglect and poor set up, the front spheres were original too,

So yes, steering clear of this one! The hunt continues..

The Maestro is still in the garage, been sorned for another year. Until i get my arse into gear, and find another shed, work cannot start until ive stripped the interior out.
Top

Interesting, if not a little dissapointing with the sunroof.
May be asking a bit much to find a perfect one though Gareth, especialy in rare S2 form, and green.

Good luck with the search though

Deanxm wrote:Interesting, if not a little dissapointing with the sunroof.
May be asking a bit much to find a perfect one though Gareth, especialy in rare S2 form, and green.

Good luck with the search though

Not expecting perfect, just an honest one thats not been mistreated, they are out there. The colour isnt critical, just happens to be one i really like. Wouldnt hesitate at a grey one!
Top

There must be some floating around but im not even sure how many S2's are left, according to the hugely inacurate 'howmanyleft.co.uk' there are 138 Activa's of all flavours with 47 of those being sorn'd so it will take some time.

I take it you have seen THIS?

Better pictures of the Fiesta.

I've not even waxed it yet!


I do plan to get some colour coded bumpers for it, as the plastic ones do have a few little scuffs on them.

One strange thing is a flat spot in its power delivery, normal driving fine, flat out fine, its usually when the revs are up to 2.5 to 4k, driven briskly, it will hesitate for a second then pull as normal, i cannot replicate it more than 50% of the time, i did find the fuel filter was totally blocked up with crap and the spark plugs had no more platinum tips left!

I think its the EGR system which was later deleted from 1997 onwards, although bypassing the vacuum makes no difference, personally i reckon its to do with the mapping of the ECU that causes it, but i still have to replace the ignition leads, i have cleaned the MAF sensor and the throttle body which was a bit coked up, beyond that i want to try to diagnostics to check values when being driven, otherwise it can stay as it is!

Its fairly nippy though and pulls well from 1200rpm without fuss, i am of course used to turbocharged/remapped cars so it will always feel slow regardless, just want it running spot on before Vicky uses it.
Top

Good to see you back on here Gareth

Your little Fiesta looks a good one, they are often as rotten as a pair now but it does look great around the arches. They are a neat drive too, quite fun for a small car.

Its a shame about the Activa being a dog, though I do have my suspicions about them which is why it took me so long to get one

People tyring to run them every day with little maintenance is never going to result in a great Activa.

I tried to buy a HDi Exclusive Xantia in that green colour (my favourite too) but that was a right dog, it had even been spray painted badly on a few panels! None of its faults were mentioned either.

Hopefully you will find your idea one soon.