What is the recommended oil grade? I might try a 5w 40, technically same when hot but slightly thinner than a 10w when cold. Engine seems in very good shape and burns no oil, so should be fine. The Transit actually runs a 5w 30!
Top

Jim did you see the old tyres that were on the alloys that you bought off me??

Thats what happens when you go over pressure for 10k... and the one that was the worst was the one i bought brand new when fitting the rims, a Michelin E3A Energy i think it was, rear tyre as well not front so probably didn't help as the fronts tend to scrub the sides down a bit more to make it more even when you run over pressure.. also bad for when it rains, depending on tyre fitted, but still grip is noticably reduced when running higher pressures. When the weather looks like it will be tipping it down or wet for a good few days i often drop my pressures just a bit below reccomended so as to get the best grip possible, especially at the rear

KP wrote:Jim did you see the old tyres that were on the alloys that you bought off me??

Yes, I wondered what the story was behind them Will, It all makes sense now

Xantia V6 trailered his poorly V6 over this evening and we spent a few hours on initial diagnosis. The noise is almost a scraping kind of sound, very much engine speed related and very loud. We went through all the things that might cause such a noise that was not directly the transmission and checked the starter motor, items driven by the auxillary belt and had the half-moon plate off to get a look at the ring gear, TDC sensor ring and torque converter bolts. All drew a blank so we must now proceed toward the gearbox transmission which means an engine lift.

There are two possibilities as we see it, either the torque converter lockup clutch has broken up or the "B" Clutch has disintegrated and is rubbing metal to metal. The "B" Clutch is favorite as it is engaged even in neutral. This clutch had very much failed in mine. Luckily, hopefully it will have caused no damage as the car will still drive although we pushed the car off the trailer and into it's sick-bay and ran it only for a few seconds to appraise the noise.

I shall be busy tomorrow evening doing the preliminary work to lift the engine and hopefully by the end of the weekend, the engine and transmission will be out and sitting inside my garage ready for further investigation.
Top

Some good work carried out this evening on the poorly V6

I slipped off a cam cover to make a final check before the preparation work leading to the engine lift. All appeared good there clear so the work commenced in earnest.

Despite a bout of "Dad's Taxi" work and a long phone call, I have the front suspension apart, the LH driveshaft out and the RH driveshaft on the way. The intermediate bearing is putting up a fight (They always do for me these days

) but once the time reached 21:30 I thought better of walloping the bearing out due to the noise I'd make. Also, I was beginning to wonder why my legs and feet were feeling wet - it was pouring with rain and I'd not even noticed

Time top stop for the night...

Weather permitting, work will recommence in the morning when the intermediate bearing will have had a time for a good soak in Plus Gas...

This time round, I found the top "hockey stick" bolt was best attempted by going in from the RH wheelarch rather than try to fiddle around from the other direction and having the exhaust headers get in the way of things.
Top

Im inside as soon as its dark! which these days is rather early!!!
Top

davetherave wrote: Im inside as soon as its dark!

Don't they have electricity up in Norwich then Dave

I find my little fluorescent lead-lamp and my LED flood gives plenty of light along with that which spills from the garage to work well into the night. The thing I must abide by is my promise to the neighbours not to be too noisy after a certain time.. As it is they're very tolerant of my activities

I knew it, this engine pulling business is spreading like some sort of epidemic lol. good luck Jim, i know how much fun can be had now.
Top

Jim will be along shortly to give the gorey details, but we had a fine day removing the engine and transmission from my V6. Jim was very good and did most of the messy work (but he did need to borrow my big hammer!).
We are all very lucky to have a characterful person like Jim around (me especially so now).
Top

I have made a note that despite a good selection of hammers, my largest is not quite large enough and I'll soon rectify that! I'm not so sure that the intermediate bearing was the entire cause of the difficulty; it looked like there was some corrosion on the gearbox end splines as well (automatics run dry diff splines).

The next underneath job was the exhaust manifold to cat connection. This is the same as any other Xantia but bigger and even less accessible. It's a two-handed job and needs a socket on a very long extension containing a universal joint. Engine mount disconnected I could finally crawl from under, blinking in the sunlight. To make all that work just a little worse, the car was just supported high enough to crawl under as any higher would have impeded engine removal later.

Work them moved swiftly on, fuelled by fish and chips (many thanks indeed for those Mike

) and seemingly in no time at all we were ready to show the engine the crane and start lifting. This went surprisingly well and the only minor damage was a small lump out of the slam panel where the HP pump pulley became entangled in it. That removed and some careful jiggling had the engine and
transmission out. We did think we could escape removing the gearbox mount bracket and moving the fusebox but alas, both operations proved necessary.

Once the engine was wheeled into the garage, we found that only the front bank exhaust header pipe needs to come off. The engine was set on wooden blocks and the transmission separated from it after removing the TDC sensor (damage risk and a right devil to remove

) and the pressure regulator. Vince called around this time to have a word about a nasty LHM leak he has.

Once the gearbox was off, we set about removing the torque converter and found it was stuck very fast. It wobbled but would not easily pull off as it should. We tried a bit of gentle leverage but to no avail. Mike hit on the idea of using metal bars as a kind of puller and we looked around for some suitable material. Dexion racking uprights were spotted in the roof of the garage and a couple of lengths were used to brace across the bellhousing and using the flexplate mounting bolts we succeeded in pulling off the torque converter complete with a gush of oil.

We then immediately spotted what was wrong. The torque converter tail (the bit that drives the oil pump and is its main supporting shaft) was found to be firmly welded to its bearing as shown below and identified by the green arrow. The bearing should have stayed in its housing in the oil pump casting! 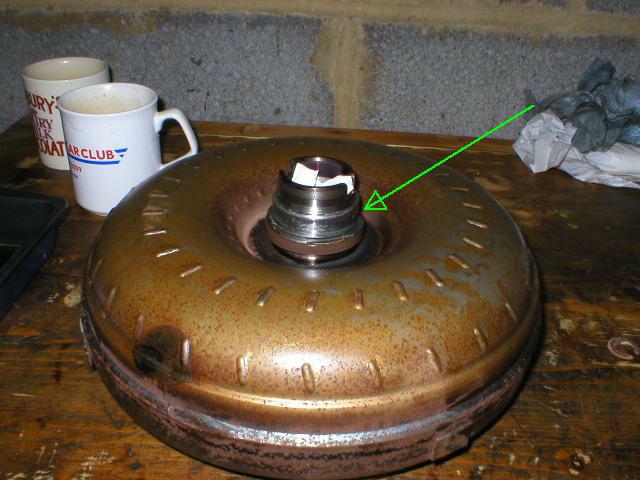 The torque converter oil seal can be seen below the bearing!

The bearing is normally a soft plain bush, a bit like a big end bearing in principle. It appears to have become very hot as it is literally welded to the tail and "blueing" can be seen inside the tail at the point where it has welded itself.

We are almost certain the lockup clutch or stator sprag has failed within the torque converter, which shed debris into the oil which caught under the bearing. We did find a suspicious piece of bronze in the oil that drained from the torque converter.

It appears the gearbox is OK but it will still be stripped, fully checked, cleaned and treated to a new oil filter and gaskets at the very least.

All in all, a wonderful day that started off with torrential rain which did not look at all promising only to give way to a warm and sunny day that was just ideal for the job in hand and hugely successful

It looks like the transmission in this discussion had exactly the same failure. Pity they didn't get a more coherent description of the root cause.

I am nearly falling asleep myself now...
Top

Lucky Renault owners, no need to remove the engine

If only that were the case on the Xantia

Why do the later adaptive boxes have dry diffs outputs then? surely that would be a real pain to get the driveshafts out after a few years.

I think it's all to do with the "sealed for life" nature of the 'box Dean. It allows the driveshafts to be pulled out with no loss of oil.

These 'boxes come from the factory read-filled and in fact it's important after a rebuild to fill and prime them first before refitting...
Top

Ah that makes sense i suppose, seems like a lot of trouble to go through just to save the tiny price of an oil change every year though?

Will be looking forward to seeing any pictures you have jim, the HP20 although sounding vastly more complicated than my 18 interests me a great deal.

Deanxm wrote:Why do the later adaptive boxes have dry diffs outputs then? surely that would be a real pain to get the driveshafts out after a few years.

It also eliminates the risk of damaging seals when fitting drivshaft.

Yet another 4hp20 with the same failure?

I don't accept that the problem is an oil pump failure, as the transmission was still working and changing gear.

My current pet theory is that the valves that control oil flow to the lock-up clutch (one of which should always be supplying oil to the torque converter) got blocked or jammed so that there was no oil feed to the converter.